The marketing for Disney+’s Hawkeye has gone into overdrive this Monday afternoon with the news that Black Widow’s Yelena Belova (played by Florence Pugh) will be back in the upcoming series finale.

As a recent piece in ScreenRant tells us, Hawkeye picks up with Clint Barton a year after the events of Avengers: Endgame and his attempts to get back to his family for the holidays! He recruits the help of a young archer (Hailee Steinfeld) as he is forced to face enemies from his past – namely the vigilante Ronin. 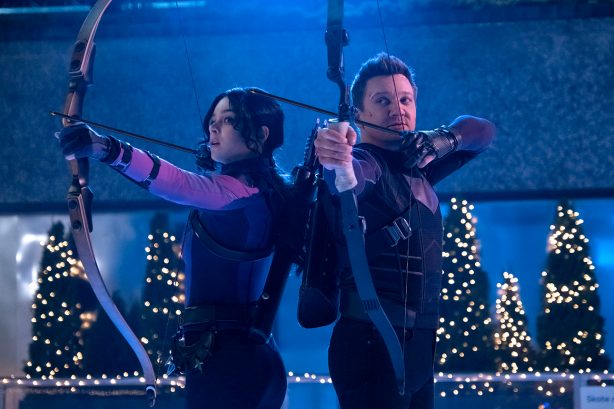 In the season finale, Pugh will be back in her role as Yelena from this years Black Widow where she fought along her sister Natasha Romanoff (Scarlett Johansson) whose death she blames on Barton. The season kicked off on Disney+ on November 24th and will conclude this Wednesday, December 22, 2021. Past episodes are currently available on Disney+ to stream.

Check out the new Yelena artwork for the series below:

Yelena Belova is back and she's on a mission. Episode five of Marvel Studios’ @HawkeyeOfficial is now streaming on @DisneyPlus. #YelenaBelova pic.twitter.com/e8QACI8JKs

As you can see from the image above, Yelena has changed up her outfit a bit from her White Widow look.  As ScreenRant speculates, this may give some insight into whether Yelena will eventually be taking over the Black Widow mantle. In preparation for the finale, Disney has released a new featurette titled “Yelena’s Back.” Let’s check it out below:

Readers are encouraged to keep following along with MickeyBlog for further Marvel news and updates!