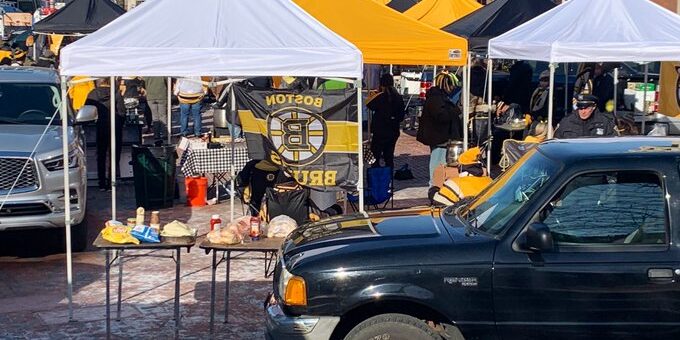 I know. I know. More and more films and TV shows are being produced in and around Boston. So I shouldn’t be all that slap-happy when Boston.com is spouting about a Disney+ film being produced around my adopted home town. But when it’s Disney filming a scene depicting a tailgate prior to a game involving my former employers the Boston Bruins… well, let’s just say objectivity goes straight out the window.

A Boston city councilman starts our blog post with his view of the Boston Bruins scene from Godmothered:

There appears to be a movie being shot on City Hall Plaza with a @NHLBruins scene (as well as a new media outlet: Boston 11 News). pic.twitter.com/muYCay6vRY

By the way, I don’t know the story of the film but, well, you don’t usually tailgate at a hockey game. Nor would you park a cah in the Hahvard Yar… er, on City Hall Plaza. 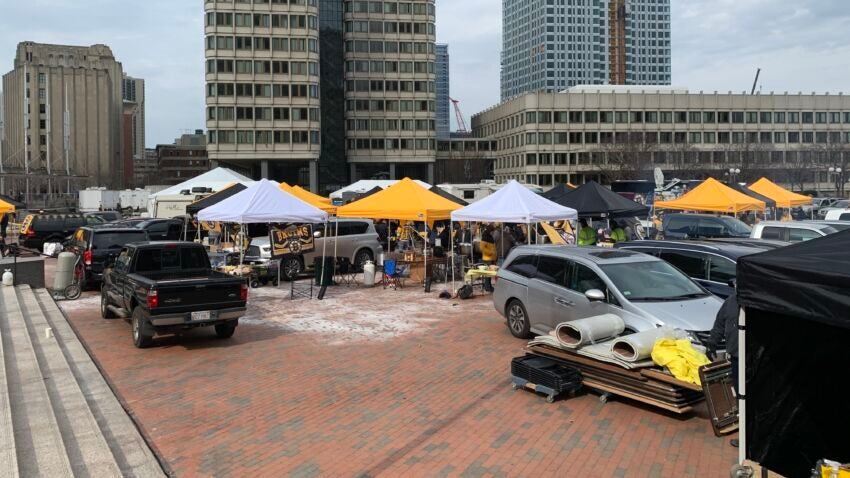 City Hall Plaza was the staging ground for what appeared on first glance to be an impromptu Boston Bruins tailgate on Monday. But appearances can be deceiving.

The rally for the black and gold was organized by producers for the upcoming Disney+ movie “Godmothered,” which has been filming in Boston and other nearby towns since late January, shooting in  Marblehead, Charlestown, the North End, and near the Boston Public Garden.

Onlookers walked through Government Center on Monday to find pop-up tents in Bruins colors, dozens of extras wearing team gear, and banners advertising a “Cold War Classic” between the Bruins and Vegas Golden Knights. “Godmothered” star Jillian Bell could be seen chatting with crew members, and a trio of news vans for fictional local TV stations were parked in the plaza, which also had fake snow on the ground to reflect the film’s holiday season setting.

So cool. And other media outlets are covering the production, as well:

And TheWrap.com gave us the lowdown on the Isla Fisher/Jillian Bell vehicle:

Sharon McGuire, who directed the rom-com classic “Bridget Jones’s Diary,” will direct the comedy from a script by Kari Granlund and Melissa Stack.

Sounds good to me. And I think I can forgive the hockey tailgating, just as long as nobody calls Boston, “Beantown.”