You may have missed the news during all the chaos, but EPCOT turned 40 this week.

We’ll talk about this, the return of an after-hours event and character breakfast, and an unexpected movie announcement. 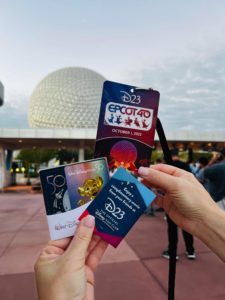 I know that the weather dominated the headlines, but this is still a jam-packed edition of MickeyBlog News.

In 1982, my father’s company sold cheap vacation packages as an employee benefit. 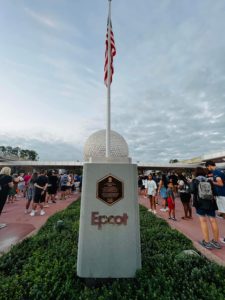 That year, my parents changed my life by picking Walt Disney World as their destination.

I still have vivid memories of the first time I saw Spaceship Earth and rode World of Motion.

At a young age, I fell in love with EPCOT, and it’s a passion that remains to this day. I’ve written literally millions of words about Disney over the years.

None of that would have happened if not for EPCOT, the park that made more of an impression on me than Magic Kingdom. 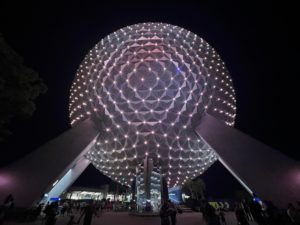 Even now, I consider EPCOT the greatest theme park on the planet, which is why this week’s events proved so frustrating.

In mid-September, park officials announced ambitious plans for the 40th anniversary of EPCOT. 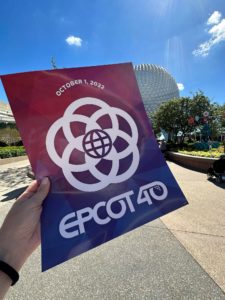 By the final week of the month, everyone realized that these plans wouldn’t come to fruition.

Hurricane Ian prevented a glorious celebration. Instead, it forced the closure of all Walt Disney World theme parks on September 28th and September 29th. 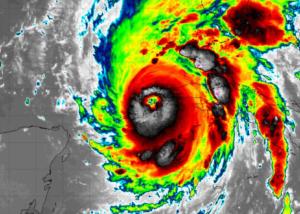 By any reasonable evaluation, October 1st represented the first full park day since Hurricane Ian. By default, it became a somber day full of relief more than anything else. 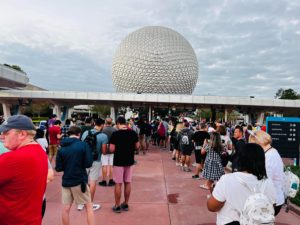 Yes, Walt Disney World had returned to normal. Nobody felt like partying for EPCOT’s 40th anniversary, though.

Park officials did what they could. EPCOT is selling an impressive array of 40th-anniversary merchandise. 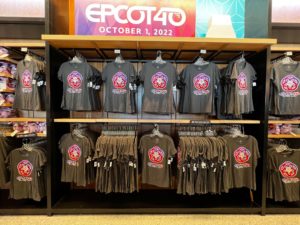 MickeyBlog also livestreamed a concert at America Gardens Theatre, and there were a few official ceremonies.

Perhaps the most remarkable visual occurred at the end of the night. Spaceship Earth hosted a Beacons of Light presentation of New Horizons. 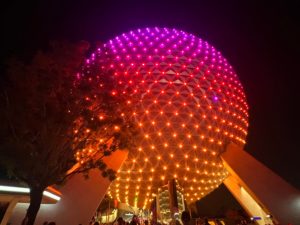 This shiny display reminded me of how much more colorful EPCOT logos once were. I sincerely hope Disney brings back that retro look soon.

Remarkably, most guests at the parks I’ve spoken with indicate that they’re thrilled they attended the 40th birthday. 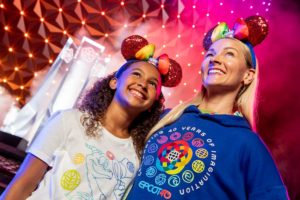 Several pointed to the fact that 2032 is just a decade away. Disney will likely throw a MUCH bigger party when EPCOT turns the big 5-0.

Disney After Hours Will Return

Speaking of fond Disney memories, I was fortunate enough to be one of the first people to attend a Disney After Hours event. 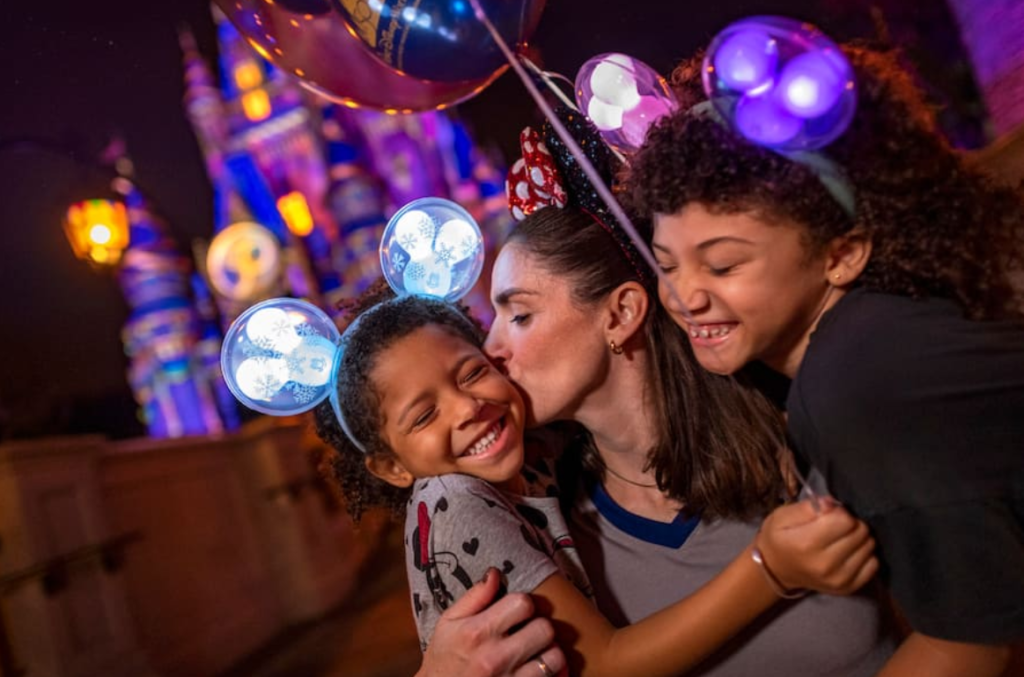 I’ll never forget the unexpected pleasure of having the entirety of Magic Kingdom to myself.

The first few events sold so poorly that Disney gave away tickets to Disney Vacation Club members and annual passholders staying at resorts. 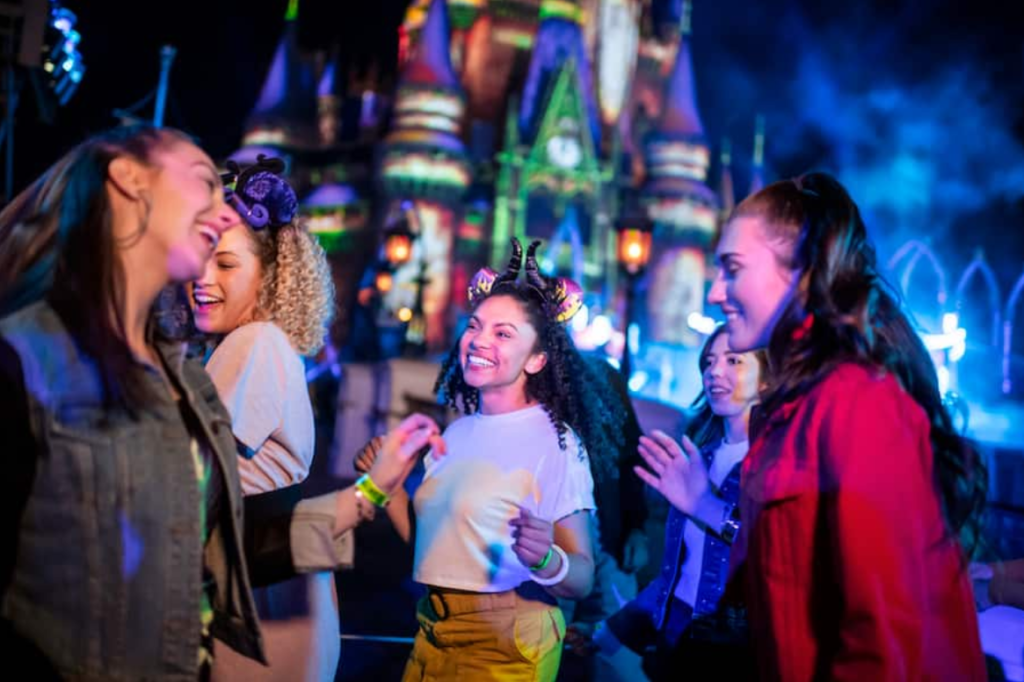 We were talking to a cast member in the lobby, and they handed us tickets. You can’t beat free, right?

Since that inauspicious start, Disney After Hours has evolved into a wildly popular event. Nobody gets free tickets now. That’s for sure! 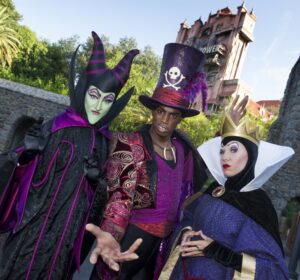 In fact, Disney offers multiple versions of the event now, one of which features Disney Villains.

This event is basically Mickey’s Not-So-Scary Halloween Party for times when it’s not Halloween.

The standard version of Disney After Hours is a more understated affair, but it comes with the only benefit you need. 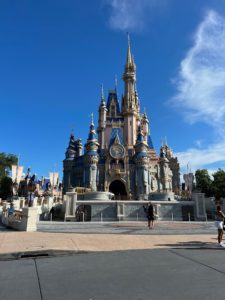 You stay in Magic Kingdom after the park closes for everyone else. Sure, you’ll pay for the privilege, but it’s money well spent.

The last time we attended Disney After Hours, we stayed until closing and rode Seven Dwarfs Mine Train five times in 45 minutes. Yes, we timed it. 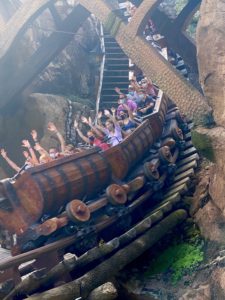 My point here is that you WANT to go to Disney After Hours no matter the expense.

Remarkably, Disney’s Hollywood Studios will also participate in 2023. That one’s a no-brainer since the park is so crowded during regular operating hours.

Disney After Hours will start on January 4th and then operate occasionally (NOT daily!) through April 19th.

I’ll add that Disney often winds up adding more dates since this ticketed event sells out so often. 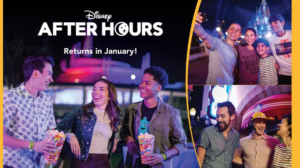 We’ve reached a point where nobody believes me when I describe what a dud those first Disney After Hours events were. It’s so wildly popular now.

Tickets for the 2023 Disney After Hours events go on sale to the general public on October 7th, which is Friday.

However, people with existing hotel reservations for the applicable dates can purchase as soon as October 4th, which is Tuesday.

Depending on the date, you’ll pay $129-$159 per person. As always, your best bet is to speak with a MickeyTravels agent for additional details. 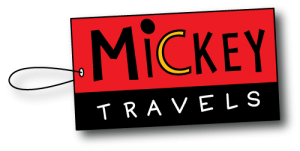 Remember that their expert services are free to you!

On a side note, we also learned that a different ticketed event won’t return this year. Disney Merriest Nites at Disneyland Park isn’t coming back in 2022. 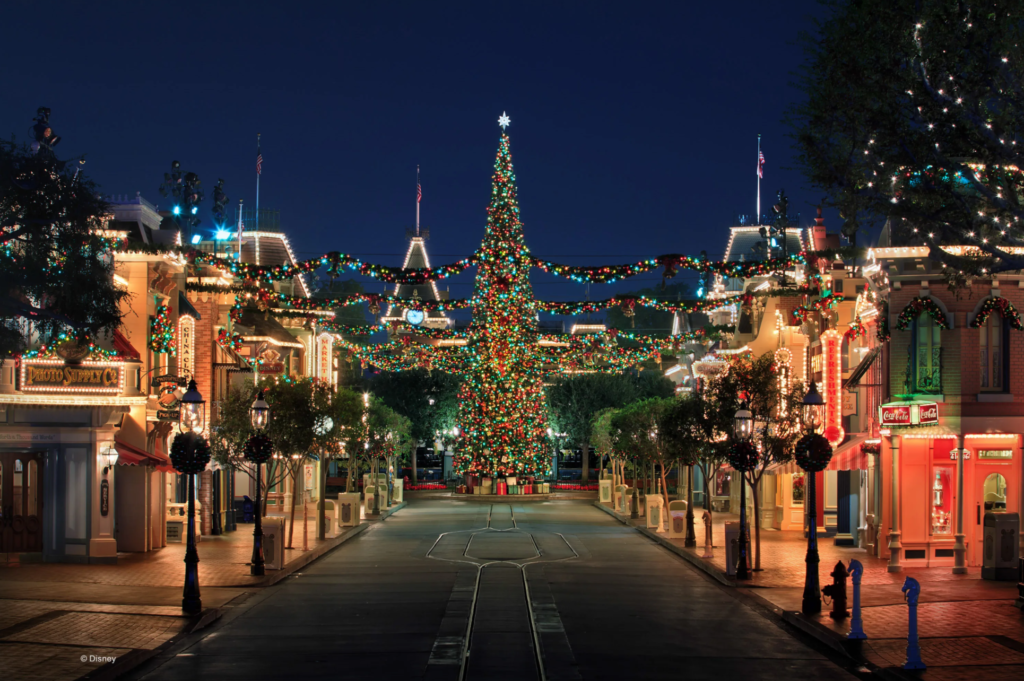 My heart is extra joyful today, as my favorite character meal has returned.

The Best Friends Breakfast Featuring Lilo & Stitch is back!!! 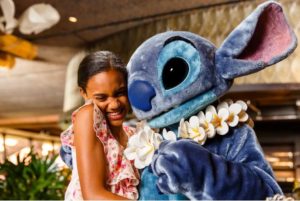 You’ll find this character meal at ‘Ohana on the second floor of the Great Ceremonial House at Disney’s Polynesian Village Resort. You should go there.

The meal is all-you-care-to-enjoy, as the servers bring giant table-sized portions of every breakfast dish. 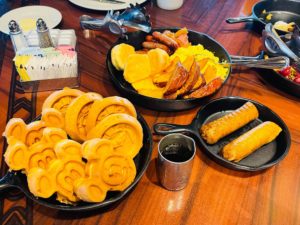 Also, there’s a Hawaiian Roller Coaster Ride performance that includes all the kids eating there to stomp around the room, which they loooove!

We’re visiting Disney at the end of the month, and I think we’re eating breakfast here twice. Knowing my wife, we’ll probably try to add at least one more.

In (more) EPCOT news, Carol Stein has announced she will retire at the start of November. Who is Carol Stein? You probably know her as the Piano Lady. 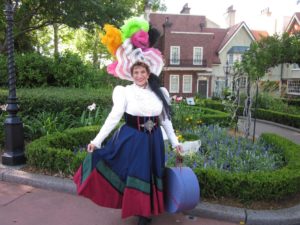 Here’s a link with a picture that will jog your memory. Yes, she plays the piano at Rose & Crown Dining Room!

We will all miss her and thank her for the joy she has brought over the years. 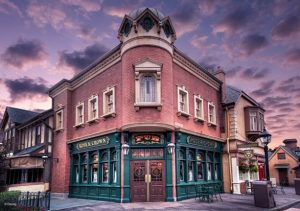 On the plus side, if you’re dining at Rose & Crown in October, you’ll have one more chance to watch her play!

In Disney Cruise Line news, Disney will no longer require guests to be vaccinated. This policy starts on October 14th. 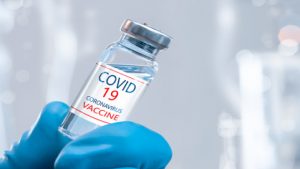 Finally, in news of the wildly unlikely but incredibly joyous, Disney has confirmed that it will make a Figment movie!!!

You heard me! And this isn’t a prank! Seth Rogen’s production house is working on the project. 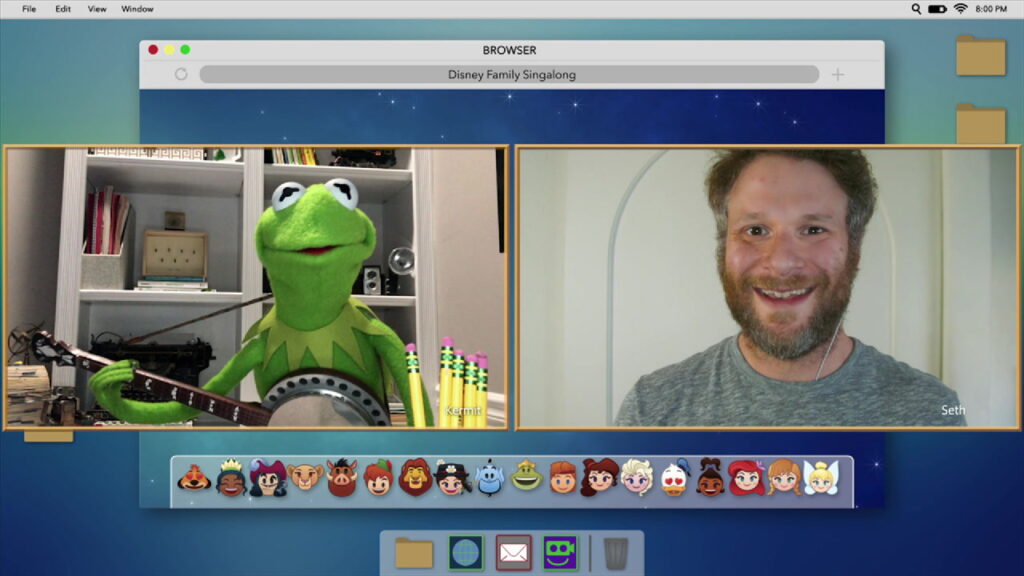 The writers of Detective Pikachu are working on the script as we speak.

This project is likely three years away from its debut, presuming it is a theatrical release. If it’s a Disney+ title, it’ll probably come out in late 2024 or 2025. 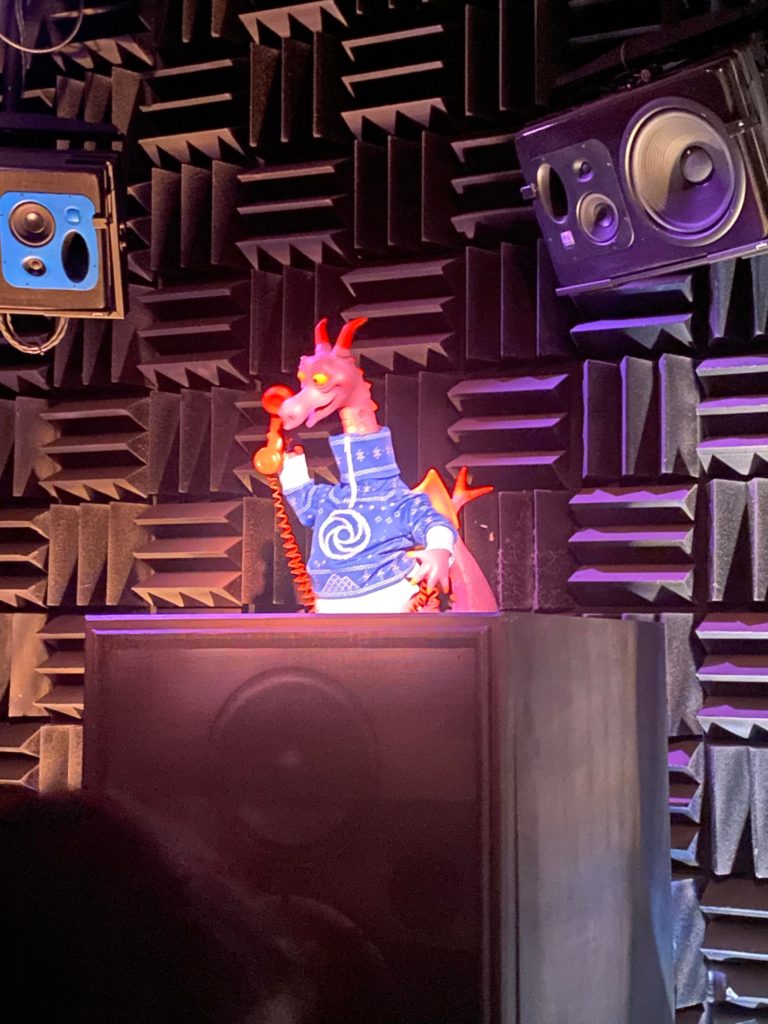 This announcement was likely going to be the big surprise reveal for EPCOT’s 40th birthday, but, well, you know…