With less than a month to go until the debut of the 50th anniversary celebration across Walt Disney World, each of the parks are preparing to bring the most magical occasion to life.

We’re over at Disney’s Hollywood Studios today, where Sunset Boulevard has been pixie-dusted with brand-new banners… 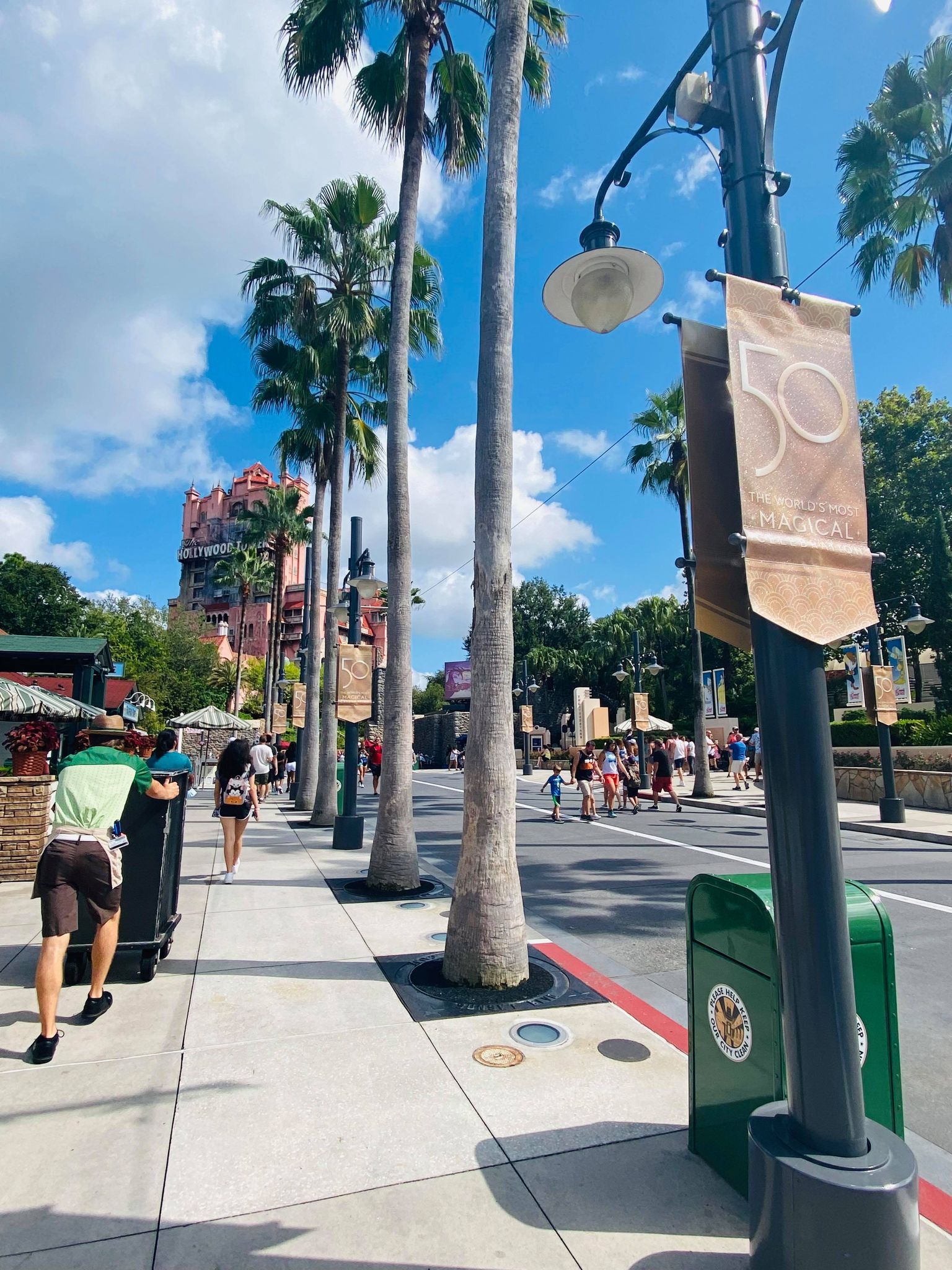 That’s right, the road to the Hollywood Tower Hotel is lined with anniversary pennants, attached to the lampposts aside each of the palm trees.

It’s a brilliantly festive start to what is set to be an exciting 18 months across Disney’s Hollywood Studios and the rest of Walt Disney World! 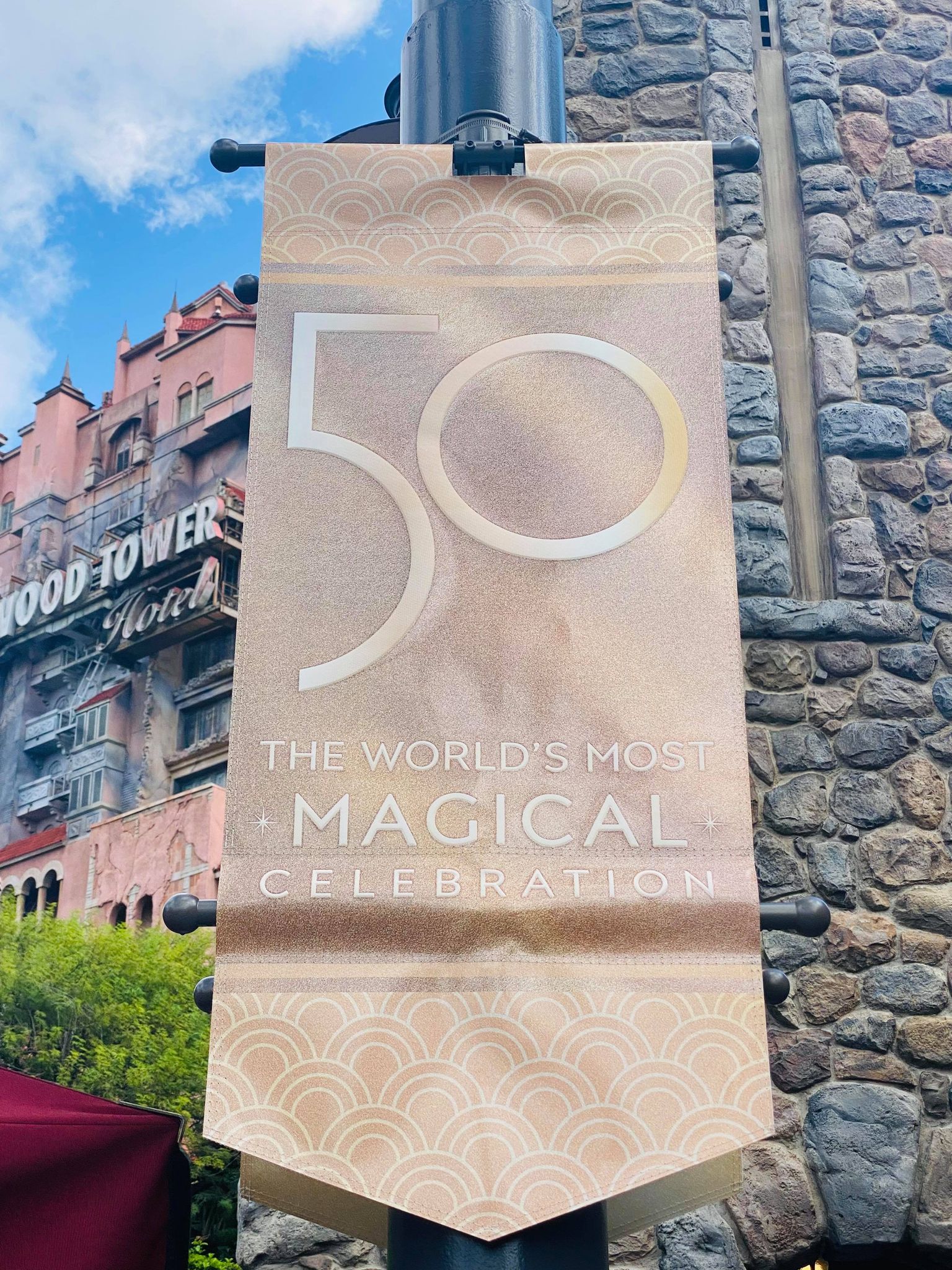 The logo on these banners matches that which can be seen on anniversary promotions all across the resort, and even on the My Disney Experience app.

It features a lavish number 50, with ‘The World’s Most Magical Celebration’ inscribed below. 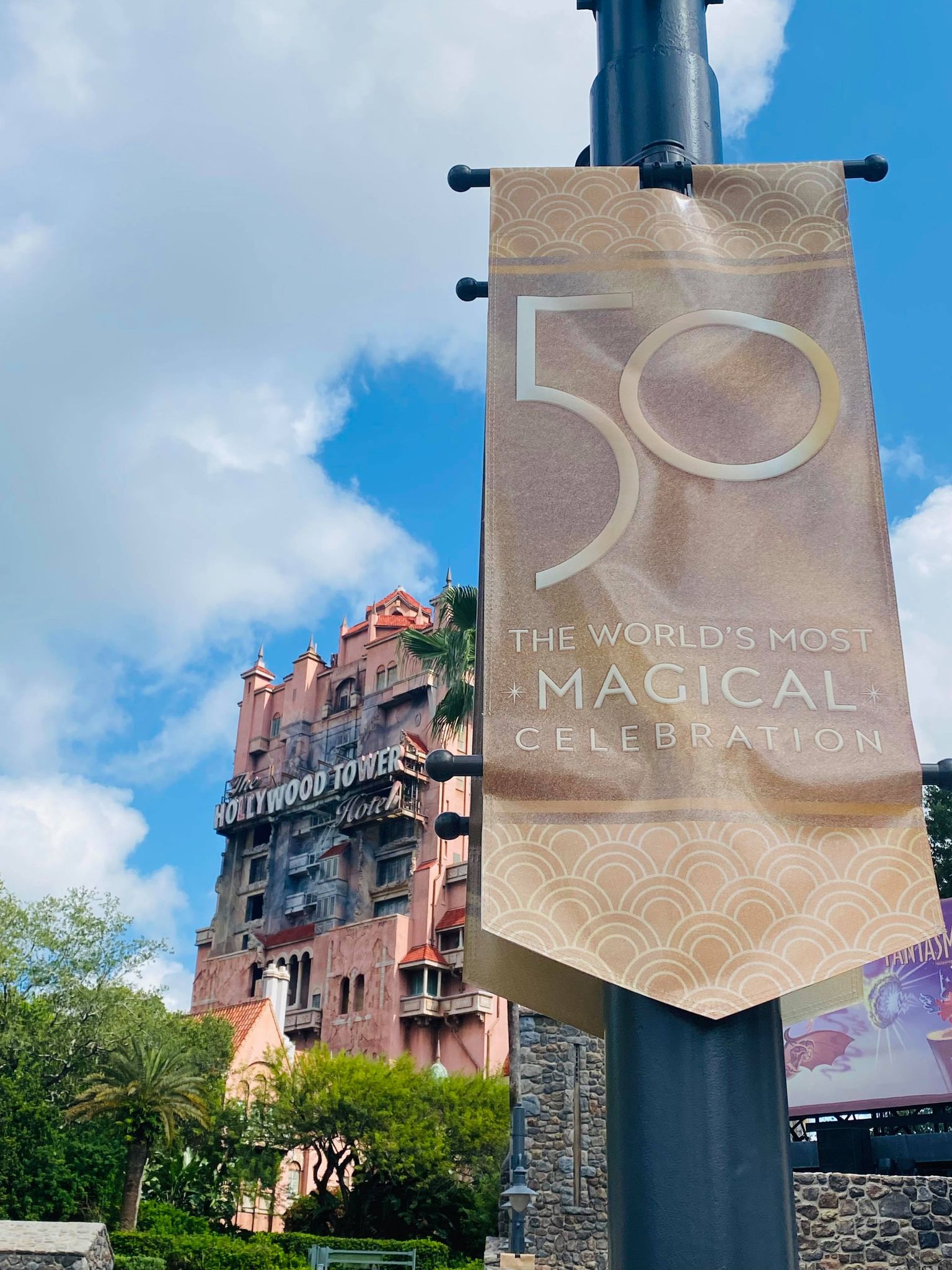 The banners even make the Tower of Terror look festive! 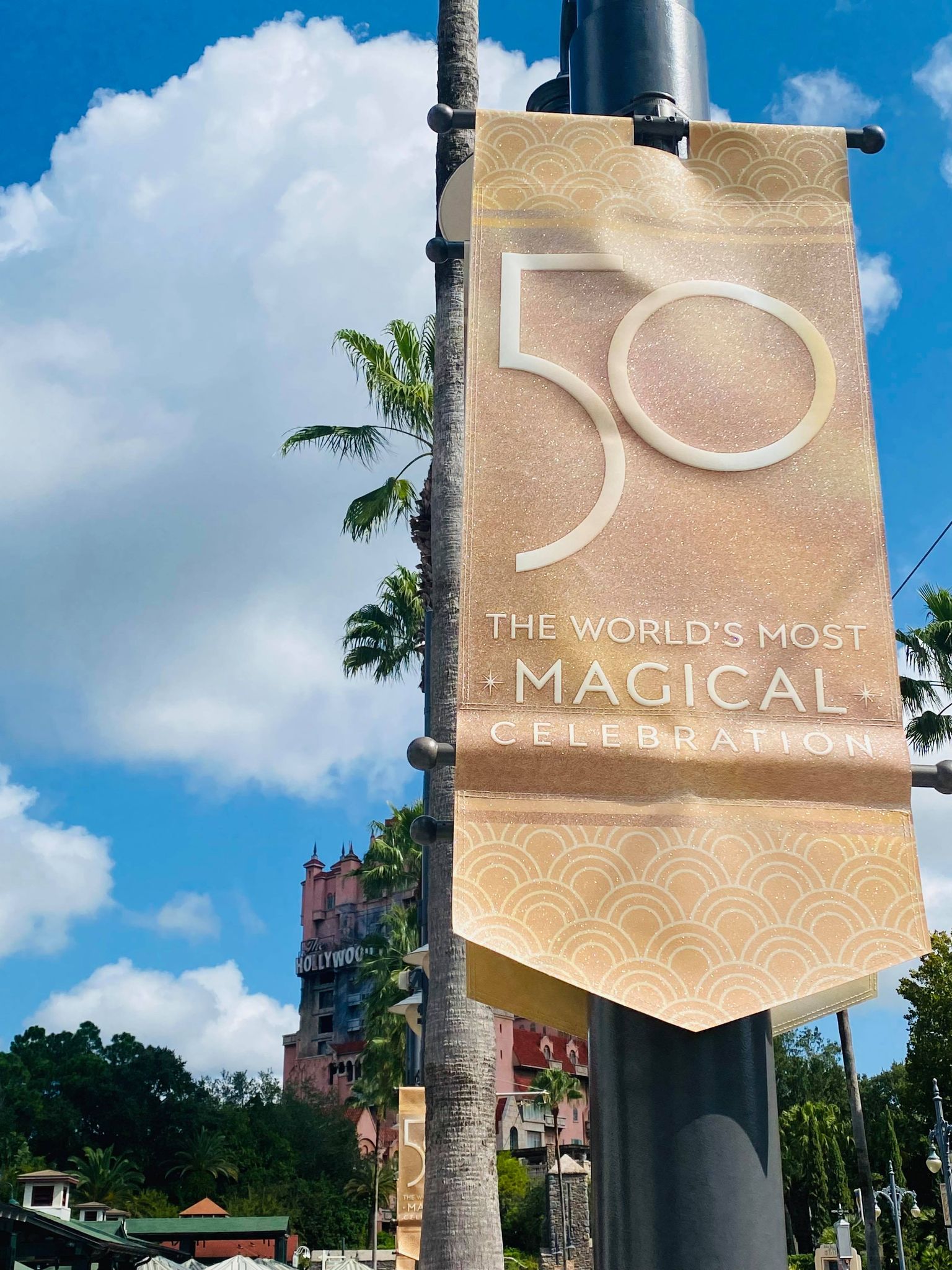 Notably, these banners feature the most stylish new color trend that is sweeping the Walt Disney World resort right now.

A kind of glittering, holographic rose-gold in color: not iridescent, but EAR-idescent! 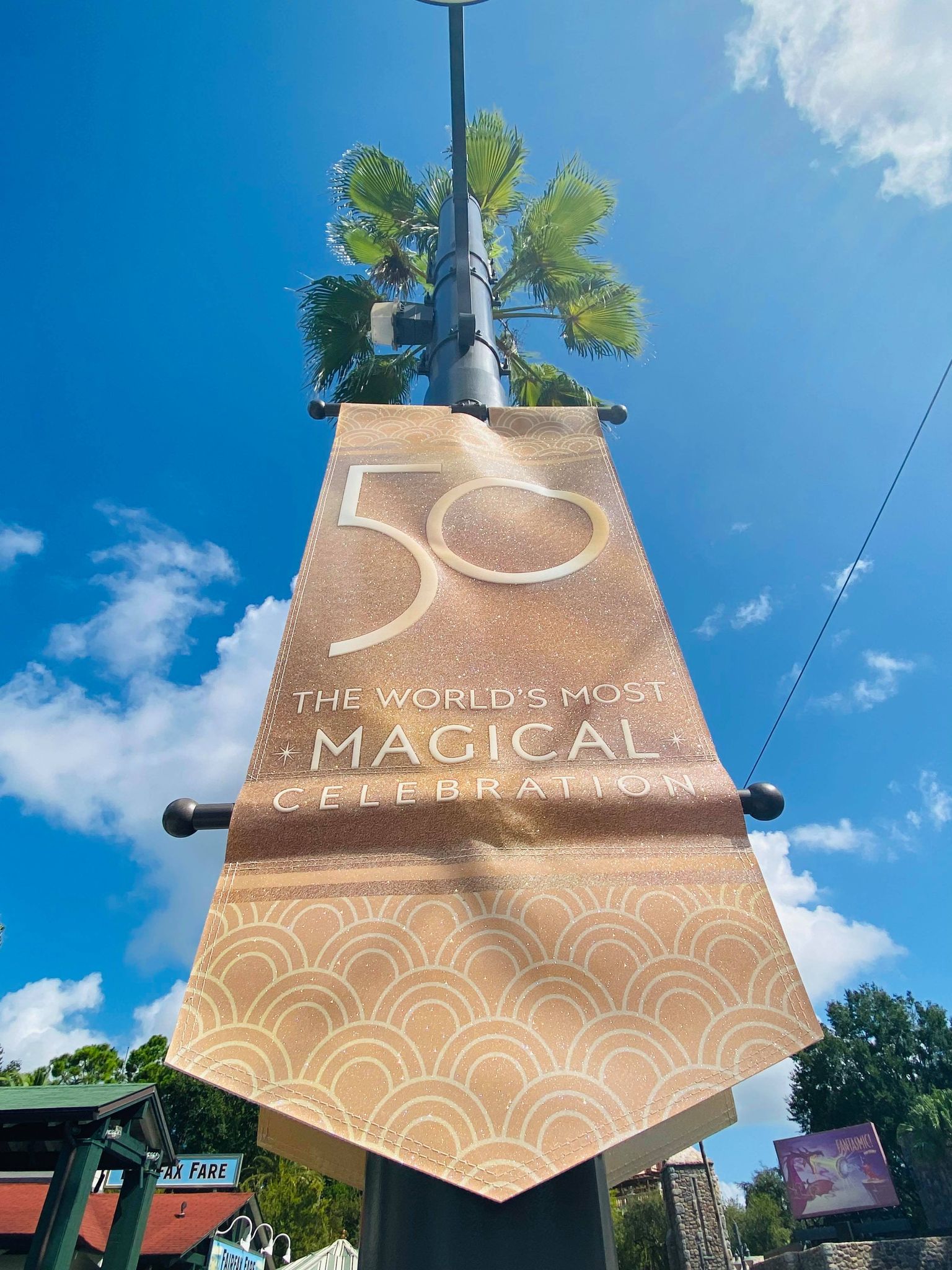 We can’t help but admire the way the banners sparkle in the Florida sunlight, almost as if they have been sprinkled with pixie dust in preparation for the celebration. 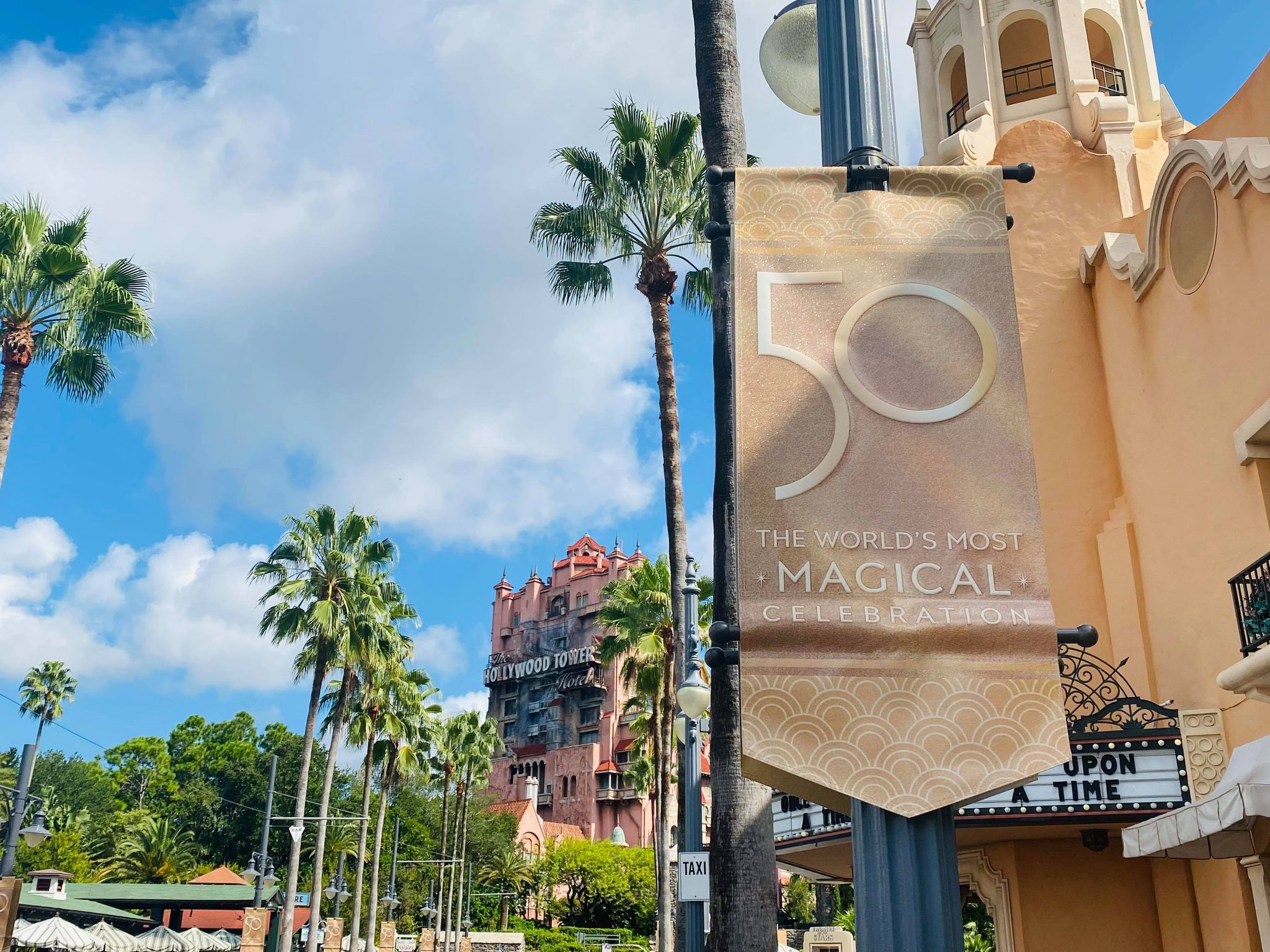 Not even those clouds can dull the banners’ sparkle! 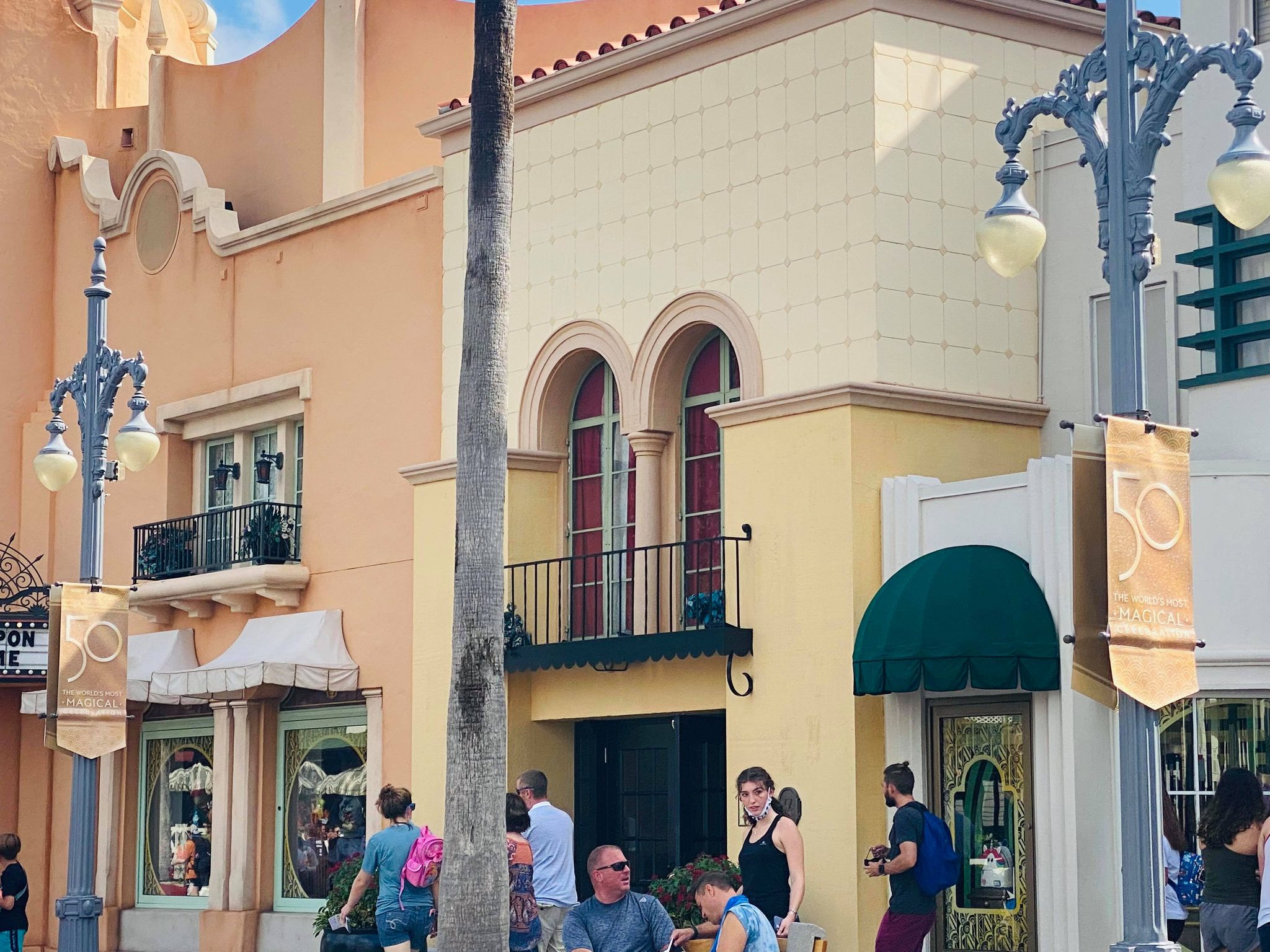 Just check out these banners flying high outside each of the stores along Sunset Boulevard. It’s almost like they’re luring us in to purchase all of the hot new merchandise pieces, which are being released especially for the anniversary! 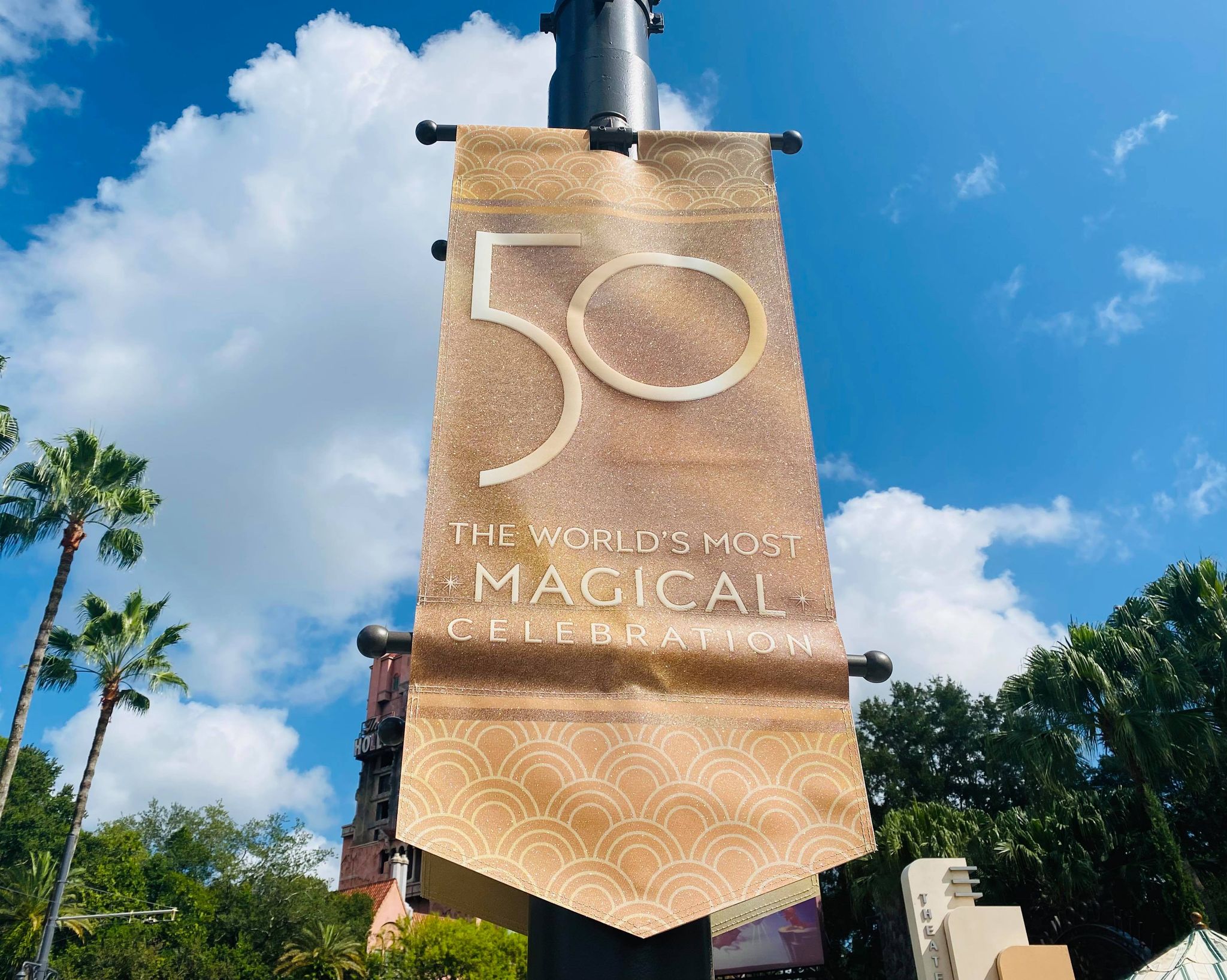 Here at MickeyBlog, we have been thoroughly enjoying counting down to the start of the 50th anniversary event by spotting all the new decorations across the resort.

Now October 1st is drawing closer, it’s not just inside the parks which are showing signs of celebration, as brand-new promotional décor can even be spotted driving down Walt Disney World’s roadways! 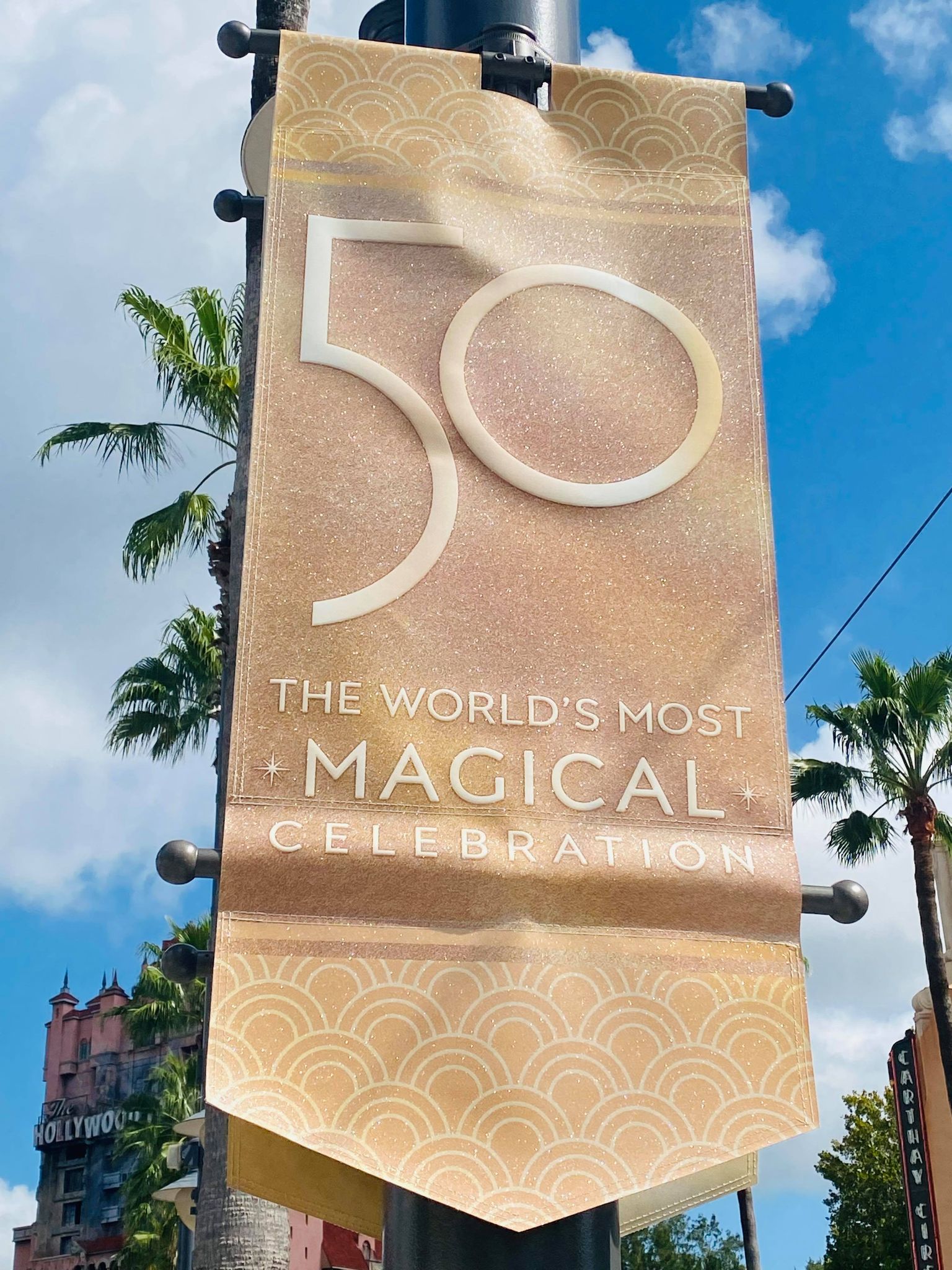 As well as these new additions in Disney’s Hollywood Studios, matching banners have already been installed at Magic Kingdom and Epcot.

We’re sure we’ll be spotting many more dazzling decorations all across the resort in the lead-up to October 1st! 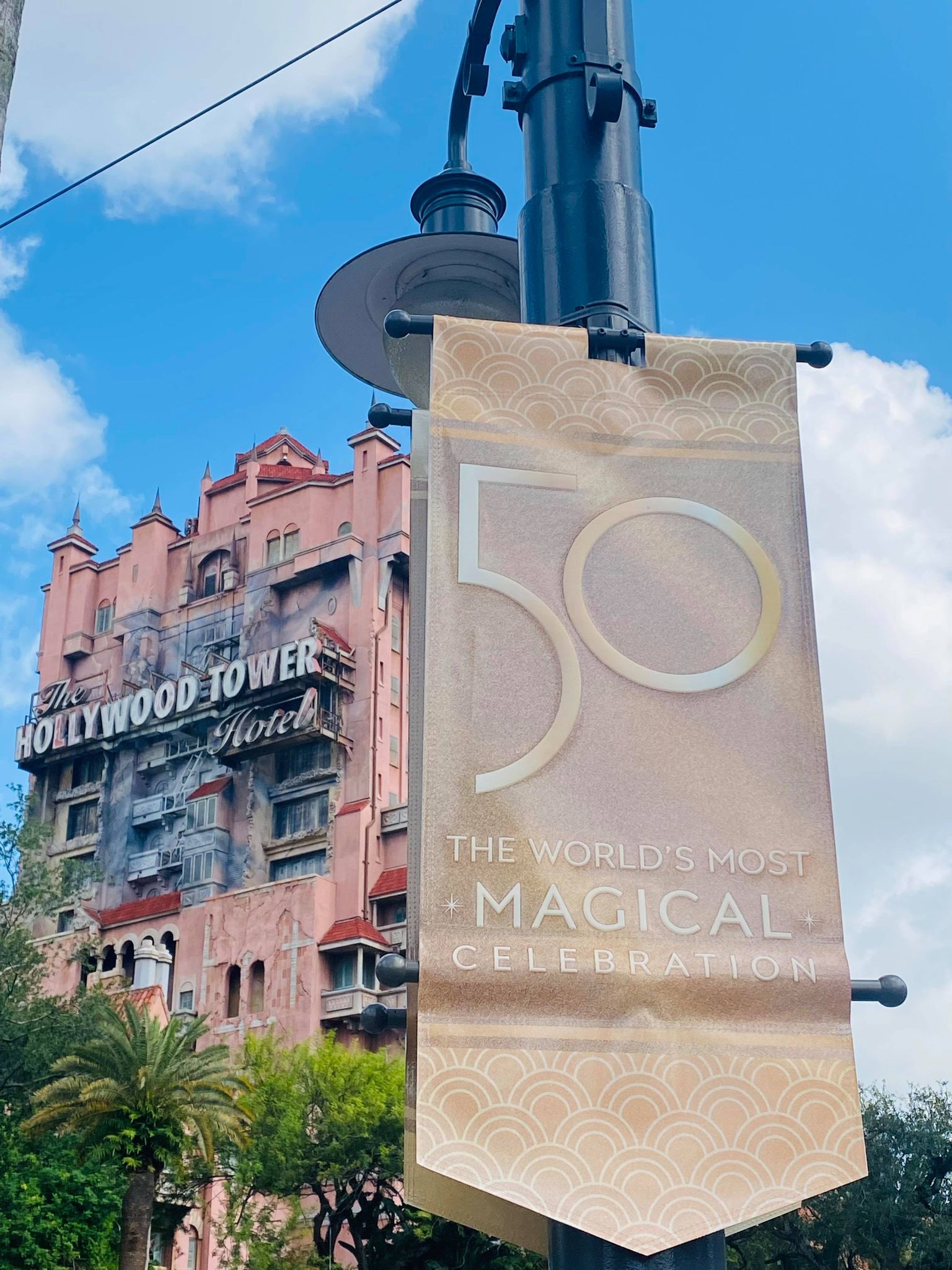 We hope you are enjoying counting down to the World’s Most Magical Celebration with us! As always, stay tuned to MickeyBlog.com for updates on the 50th anniversary event, and more!