It’s no secret that The Mandalorian is Disney+’s biggest cash cow currently, and season 2 has been met with high praise for each episode thus far. 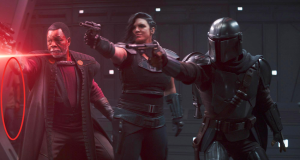 However, this week’s episode came with an unexpected cameo from a production member, as Twitter user Star Wars Stuff pointed out and shared on the platform earlier today.

The latest episode of #TheMandalorian seemed to have a slight blunder…

Of course, production errors like this will happen from time to time given the number of people that are on a set at any given time. Twitter users seem to be divided on this editing blunder with many sharing their opinions on this error.

The majority of users are making light of the situation and coming up with in-universe explanations for the appearance of the production member.

It’s not a blunder, that Stormtrooper was just off shift

Some users are not as quick to forgive Disney for the unexpected cameo.

Others are using this opportunity to chime in about the recent Gina Carano controversy after numerous tweets in bad taste began to surface on the actress’ Twitter account.

The Star Wars universe is no stranger to oversights since the original film, A New Hope‘s premiere in 1977 and spanning to the most recent trilogy with the lack of continuity. As mentioned previously, mistakes are bound to happen occasionally in this industry, and with the size of the Star Wars production team, and universe, slip-ups will happen.

What do you think of this editing mistake? Have you been enjoying the second season of The Mandalorian so far? Let us know in the comments.