Could Gina Carano’s Social Media Kill Off Her character?

Straight up. I love Cara Dune. Love the character’s backstory. And I loved how former mixed martial arts fighter Gina Carano portrayed her. 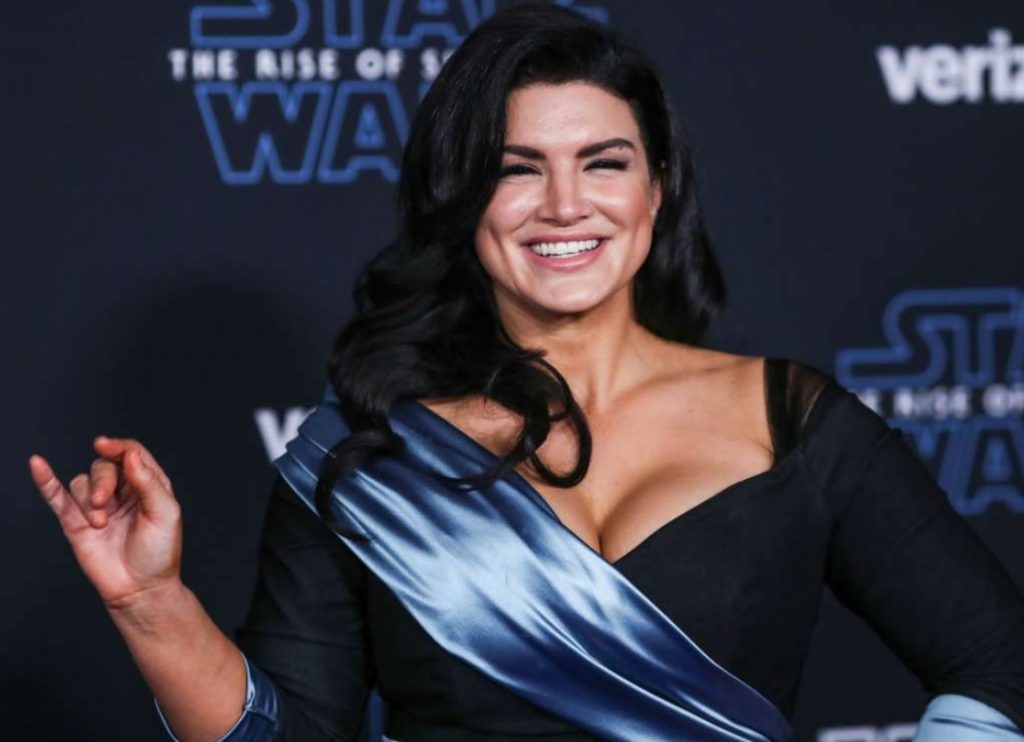 Also, when Dune was introduced, Cara couldn’t seem to hide her love for acting in the Star Wars show, The Mandalorian. It was all really fun to watch. 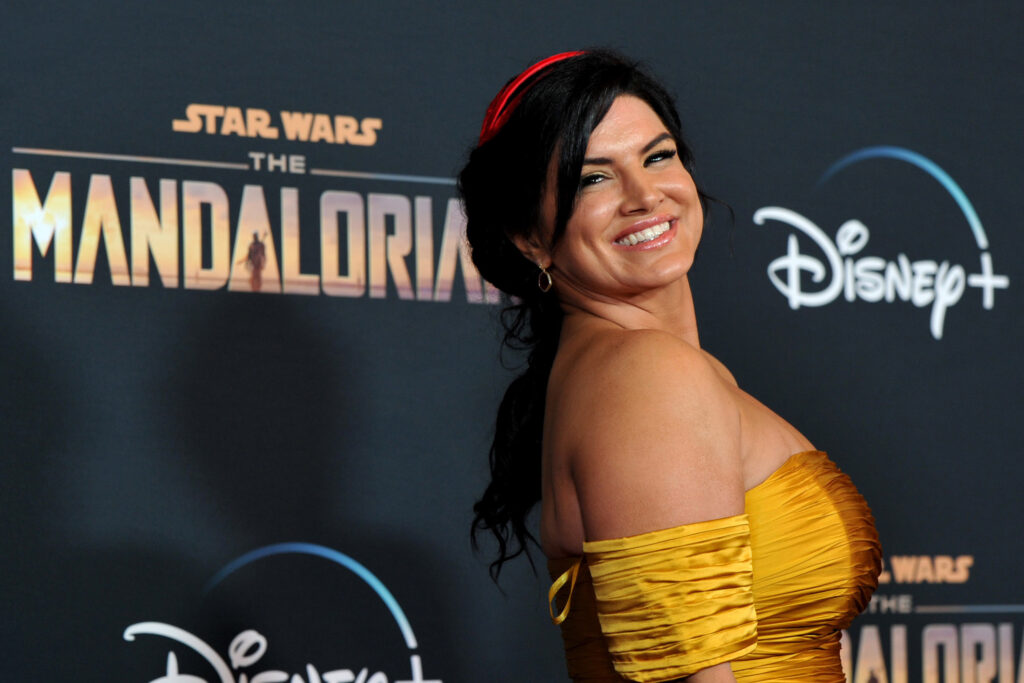 epa07994621 US actress Gina Carano arrives at the premiere of the Disney Plus web television series ‘The Mandalorian’ at El Capitan Theatre in Los Angeles, California, USA, 13 November 2019. EPA-EFE/CHRISTIAN MONTERROSA

A PR guy by trade and a journalist by training, I am used to judging things; not by my own feelings, but by how OTHERS perceive words and actions. Or, alternately, I judge situations by the facts found in the reporting of a story.

As soon as Carano’s SOCIAL MEDIA started making news, it was pretty clear how all of it would go public relations-wise. 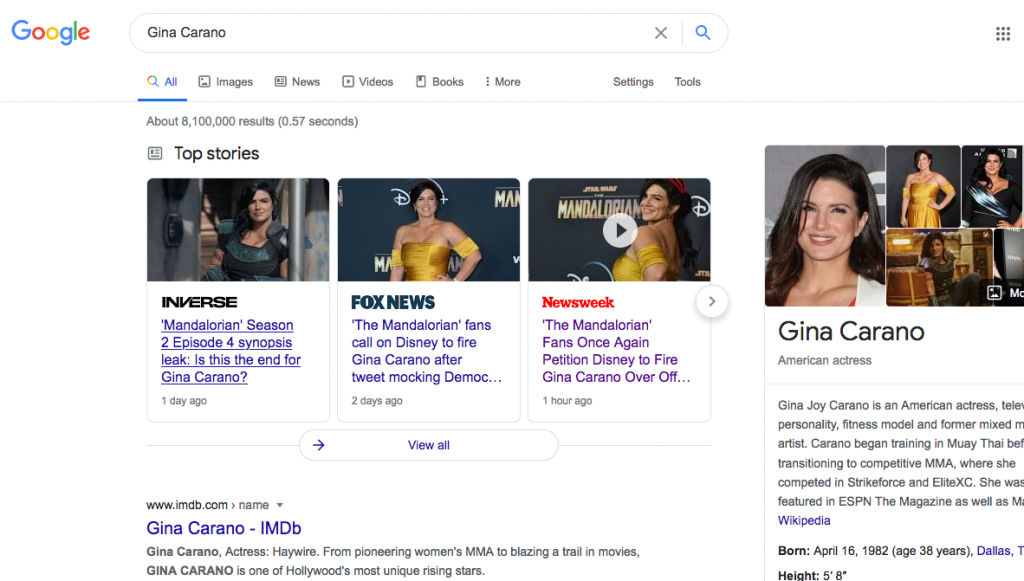 Then, when things like “#FireGinaCarano” started trending, well – the facts were pretty much in:

Cara Dune the freedom fighter will be hard to separate from the very clear political and societal opinions of Gina Carano.

Meanwhile, when Newsweek is covering the story and there’s nary a word about excellent Carano’s low key portrayal of an important character, it’s now a tale that has transcended Disney and Star Wars. 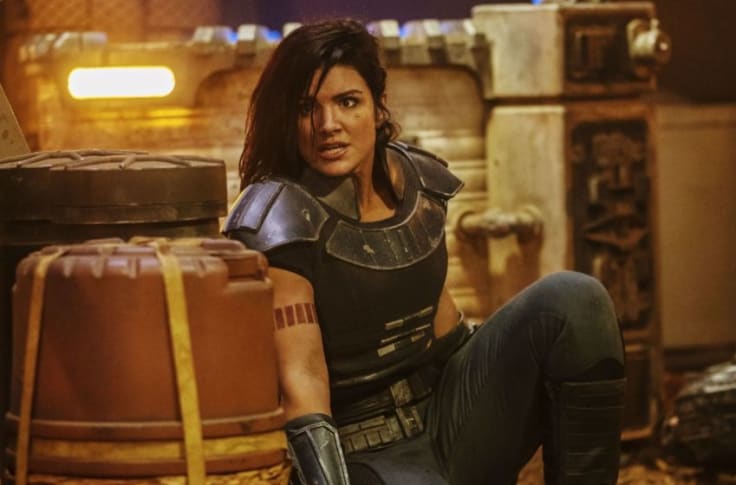 Unfortunately for anyone who loves The Mandalorian, the Carano show is a distraction and a bonified media event on its own; a distraction that could drastically alter the direction of both her character and her career. 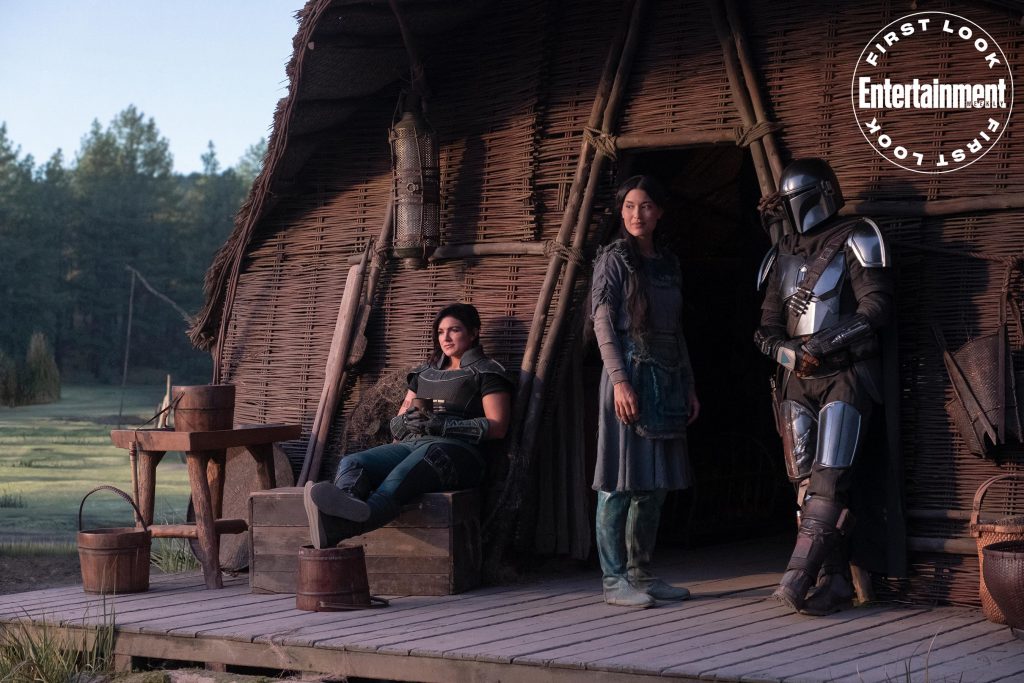 Gina Carano as Cara Dune, Julia Jones as Omera and Pedro Pascal as the Mandalorian

Either Gina Carano really enjoys riling up fans of Disney’s The Mandalorian, or she feels particularly compelled to exercise her First Amendment rights because comments she’s posted on Twitter have gotten #FireGinaCarano to trend once again. And like other times in the past, the actress and former mixed martial arts fighter has fended off critics with yet another offensive tweet.

The tweet that set people off this week was an attack on Democratic leaders, about the wearing of masks to prevent the spread of the coronavirus. Sent out on Saturday, the tweet depicts a picture with the text: “Democratic government leaders now recommends [sic] we all wear blindfolds along with masks so we can’t see what’s going on.”

Will Disney Go In A Different Direction 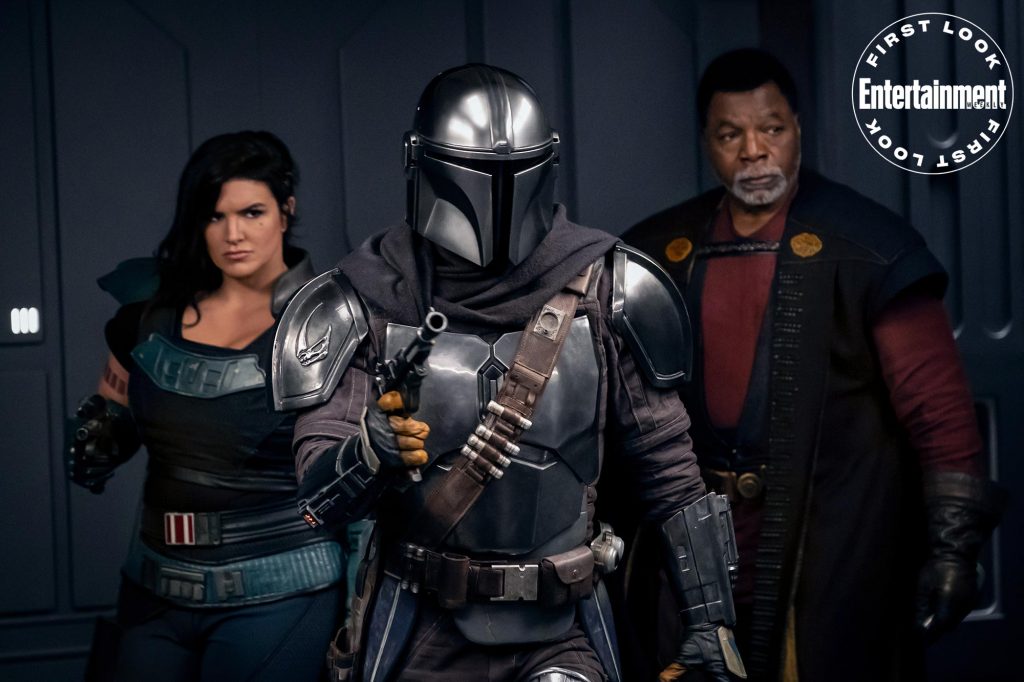 Now, it’s easy for me to say, “Play it safe, don’t rile anyone up, Gina.” After all, if I say wear your mask or wash your hands, or voice my opinion about my presidential candidate, nobody pays attention. But when Carano speaks, people listen, and there might just be a moment when the left-leaning Walt Disney Company might decide to “go in a different direction.” 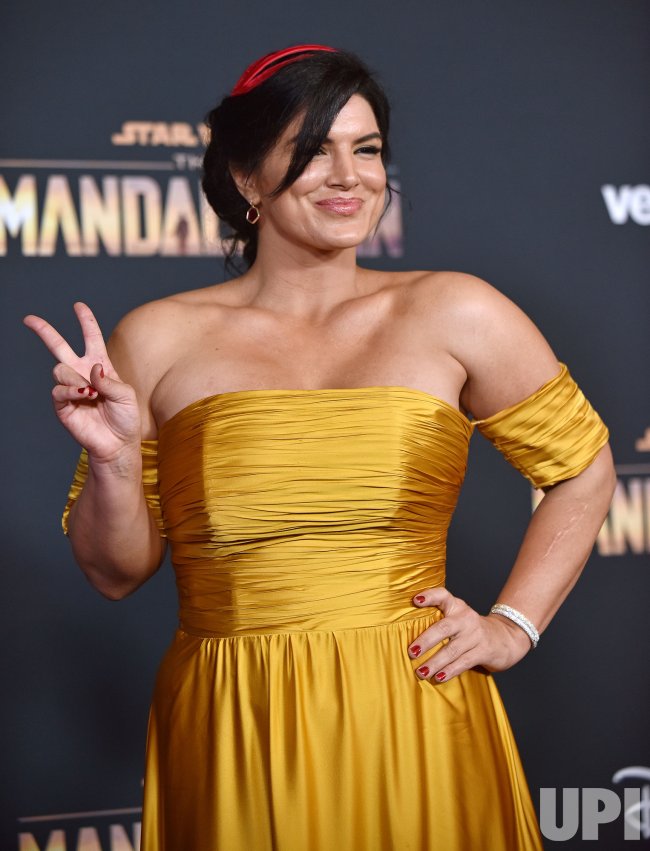 That’s what I am seeing playout for Carano: The internet never sleeps and it never forgets. And multimedia companies whose IP’s draw ire when a fictional alien eats unfertilized frog eggs are gonna get pretty nervous when TV stars start questioning safety measures during a pandemic or the veracity of a presidential election.

And that’s especially so when those same safety measures are in play in the company’s theme parks and the election coincided with an uptick in the stock market. 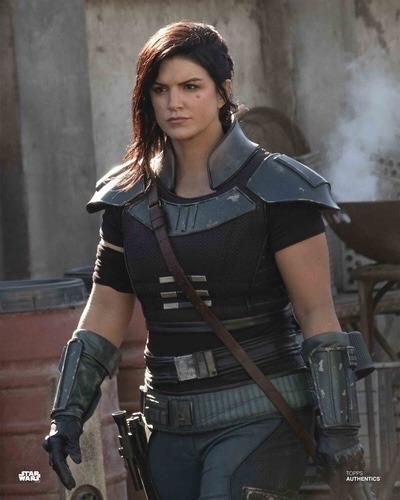 Moreover, depending on what you believe coming out of Star Wars circles, there WAS another Star Wars spinoff show being developed, which included the character Cara Dune possibly among a larger ensemble of women.

And then there wasn’t. Peeps whom I trust say those rumors went poof, coincidentally timed (?) with Carano’s tweets.

The End of Cara Dune? 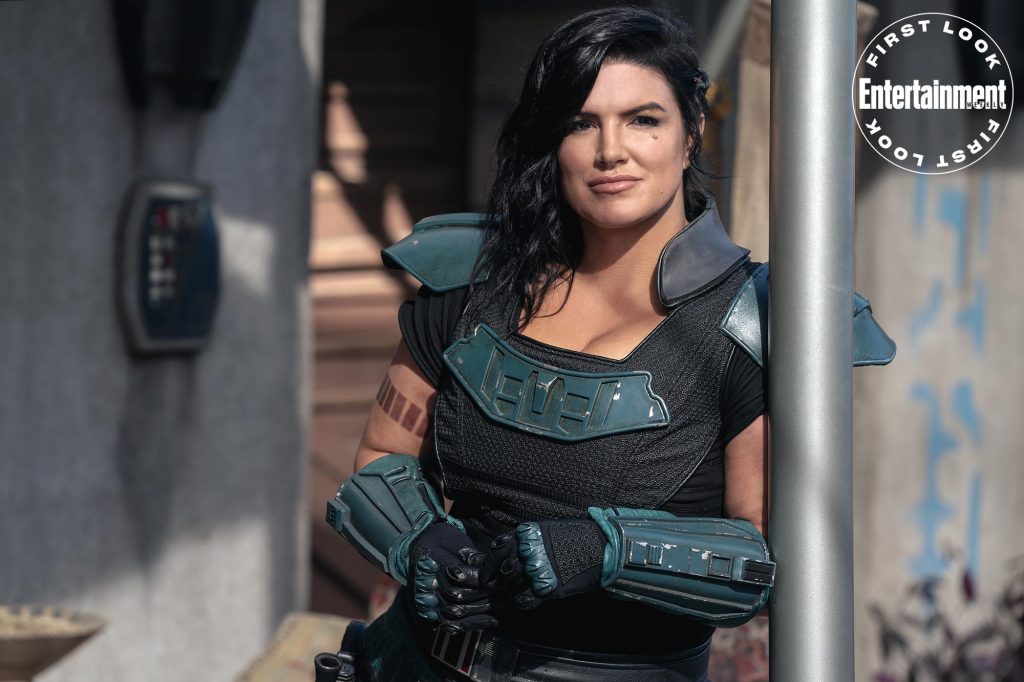 So is this the end of Cara Dune on The Mandalorian? We certainly won’t get a firm answer this Friday. Production for Season 2 wrapped all the way back in February before all this controversy kicked off. While Cara Dune may be coming back for this episode; it might not be as likely for her to return down the line. If her involvement sparks ire in the show’s increasingly younger fanbase, Disney may think her a liability.

And, perhaps noting Disney’s commitment to Diversity & Inclusion, Johnston added: “There’s room for all sorts in the Star Wars galaxy. If Din Djarin can learn Tusken sign language, everyone can be considerate enough to respect people’s pronouns.” 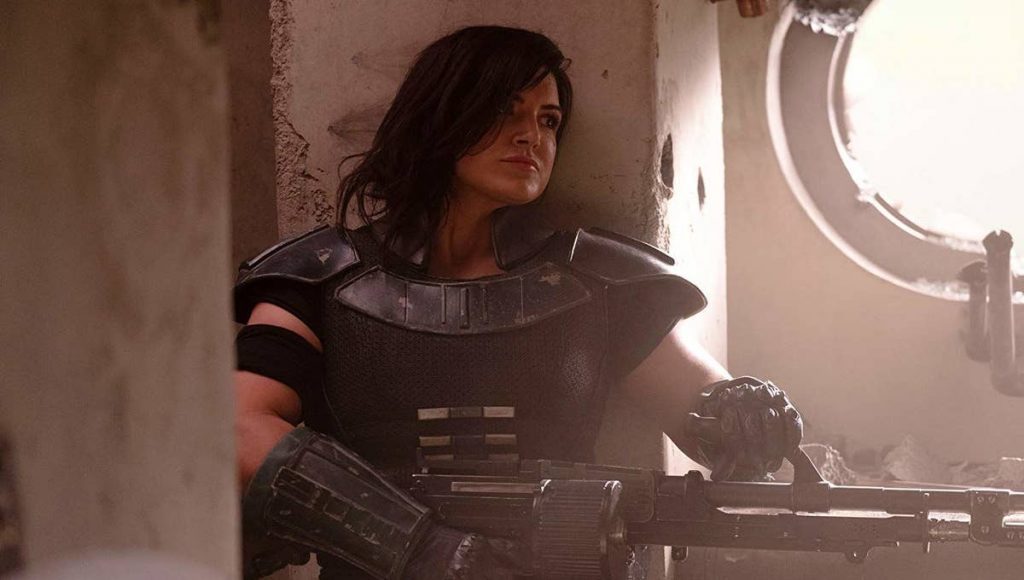 That’s especially so when the star of the show, Pedro Pascal, has a sibling who is non-binary.