Several of my usual suspects posted the news:

The links were up briefly, but That Hashtag Show has the deets: 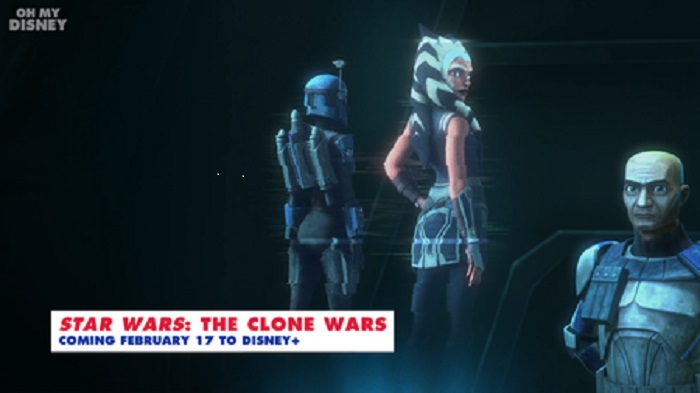 As captured by That Hashtag Show.

For a brief while on its official website late yesterday, Disney ran a promotional video in which it announced the return date for the show. We previously knew it was coming in February of 2020 (check out a sneak peek HERE). It appears fans will need to get their popcorn ready for Monday, February 17, specifically. But don’t plan on binging The Clone Wars latest season – As with its highly successful, debut of The Mandalorian, Disney+ will only air the show one episode at a time.

Though she began as a seemingly annoying sidekick, Ahsoka Tano (portrayed to perfection by Ashley Eckstein) has become the focal star of The Clone Wars. Yes, Filoni intended the series to follow the exploits of Anakin Skywalker and Obi-Wan Kenobi…. But Ahsoka stole the show. She even broke fans’ hearts when she left the Jedi Order, and Anakin, behind at the end of Season 5. Well, she’s back, together with Sky Guy, Rex and the others for another go.

Season 7 of The Clone Wars (or Season 6, if you don’t count “The Lost Missions” as the sixth season of the show) will feature ten episodes beginning February 17. That gives you about a month and a half to binge the prior seasons. All episodes are now streaming on Disney+.

Based on his own calculations, the folks at Kessel Run Transmissions speculated:

If The Clone Wars Season 7 is indeed weekly, this will more than likely be the first arc released:

Star Wars continues to conquer the galaxy! I can’t wait for February….