On a late autumn morning with heat and humidity that could have been easily taken for a mid summer day, I joined the early morning hoards racing through Hollywood Studios to be among the first to enter Toy Story Land. While everyone turned right and knocked elbows to hop in line for Slinky Dog Dash, my party and I took a hard left. We were ready for Woody’s Lunchbox breakfast! 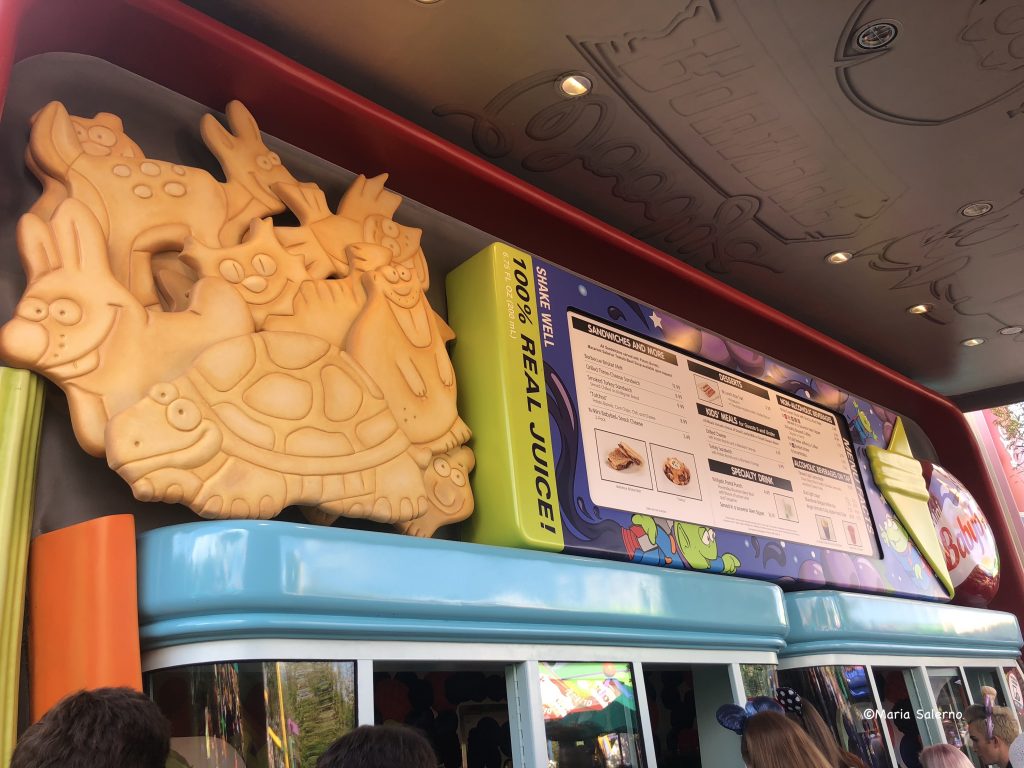 The attractions are great, but like all good mornings, I was dead set on starting mine off like every Walt Disney World mornings should start- with a hearty breakfast! In my opinion, the food at the Parks and Resorts is just as much of a draw as the attractions themselves! With new Lands comes new eateries, and I couldn’t wait to try Woody’s Lunchbox for the first time! 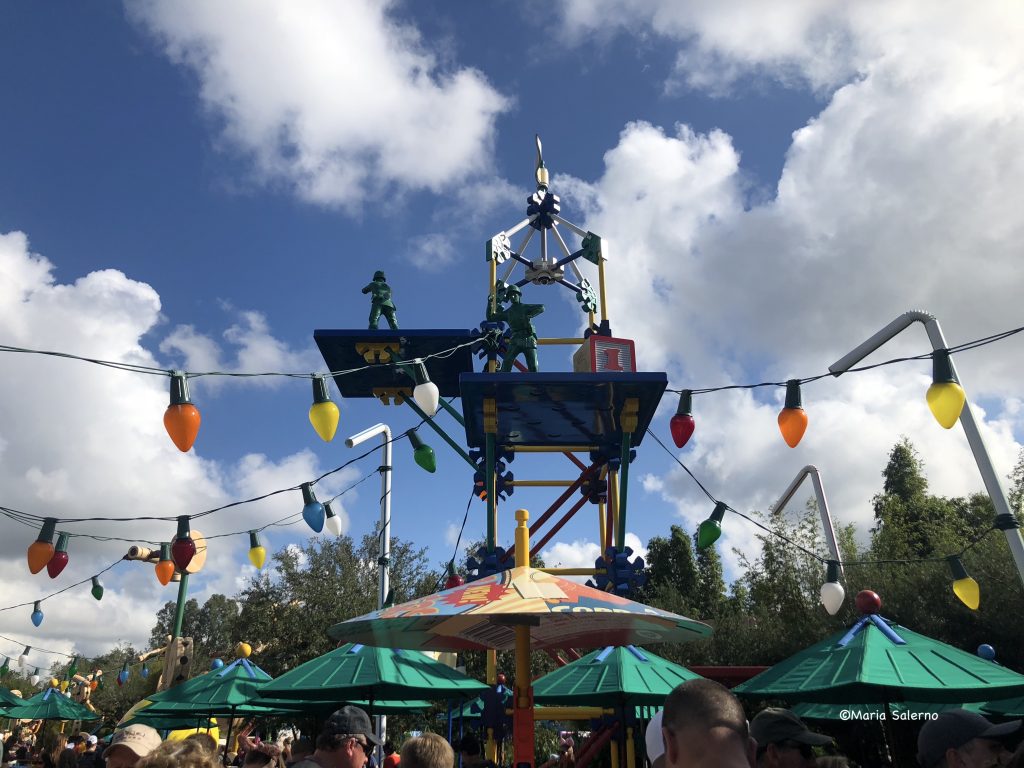 When Toy Story Land opened, the two new attractions barely grabbed my attention and for once, I wasn’t booking a plane ticket the moment it was announced. It wasn’t until the menu was released for Woody’s Lunchbox that I my excitement skyrocketed and I made my plans to visit!
On first approach, the quick serve spot looks like something from a childhood fantasy. Larger-than-lifesize green army men keep watch overhead, tinker toys serve as the uprights, and- my favorite- Babybel cheese wheels make up the chairs at the tables! 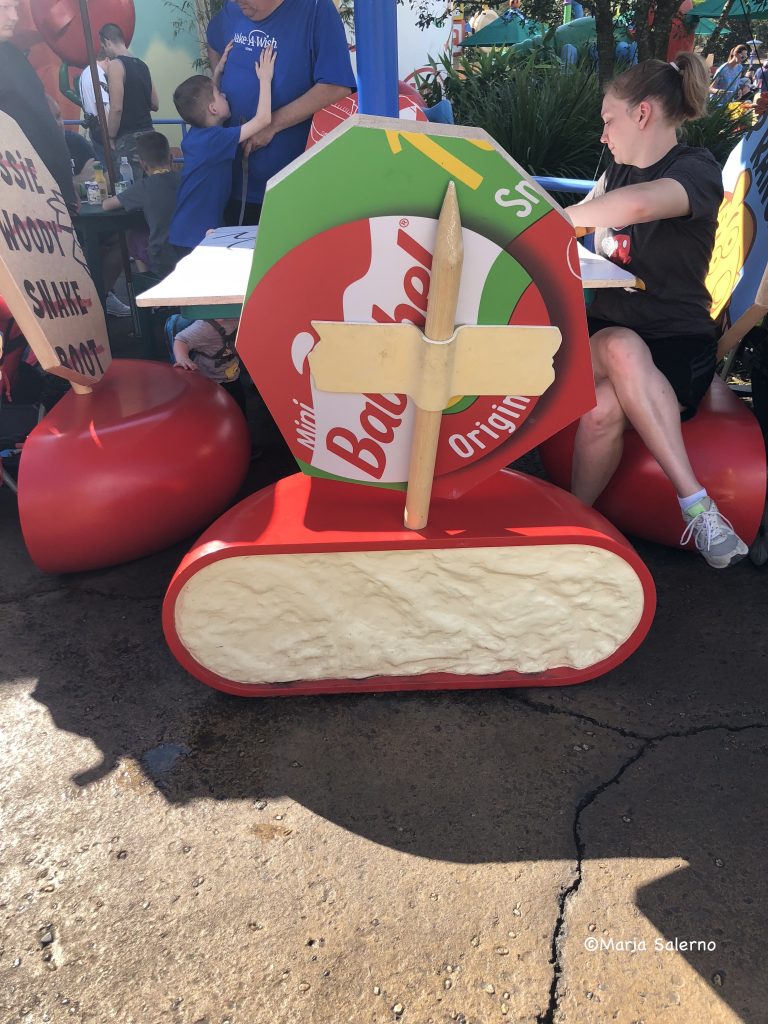 To say the themeing is thorough is an understatement. Not one aspect of Andy’s backyard was overlooked by the Imagineers, and the grandiose size of the objects that surround you really do make you feel like you’re a tiny toy in a very human world! 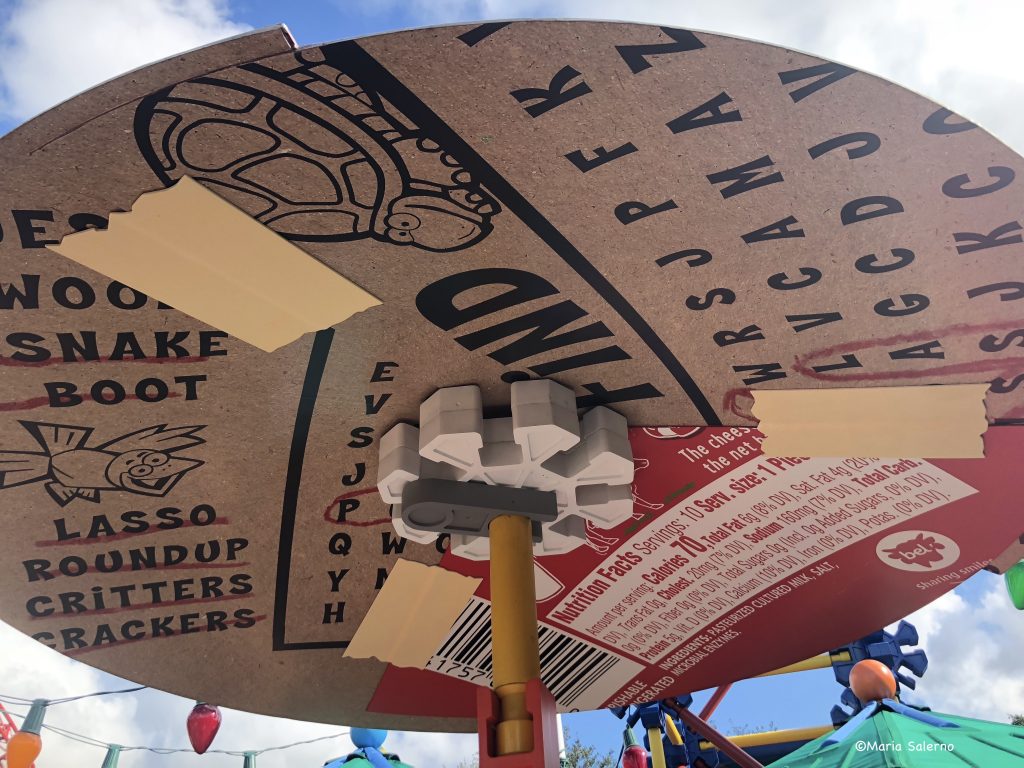 Finding and Table and the Queue

Although it’s been a few months since its opening, Toy Story Land draws massive amounts of guests each and every morning. It’s the lifeblood of the current Hollywood Studios, and the crowds rushing to its entrance made that fact very clear. So I wasn’t surprised when I finally gained entry and found the line at Woody’s Lunchbox lengthy- to say the least. 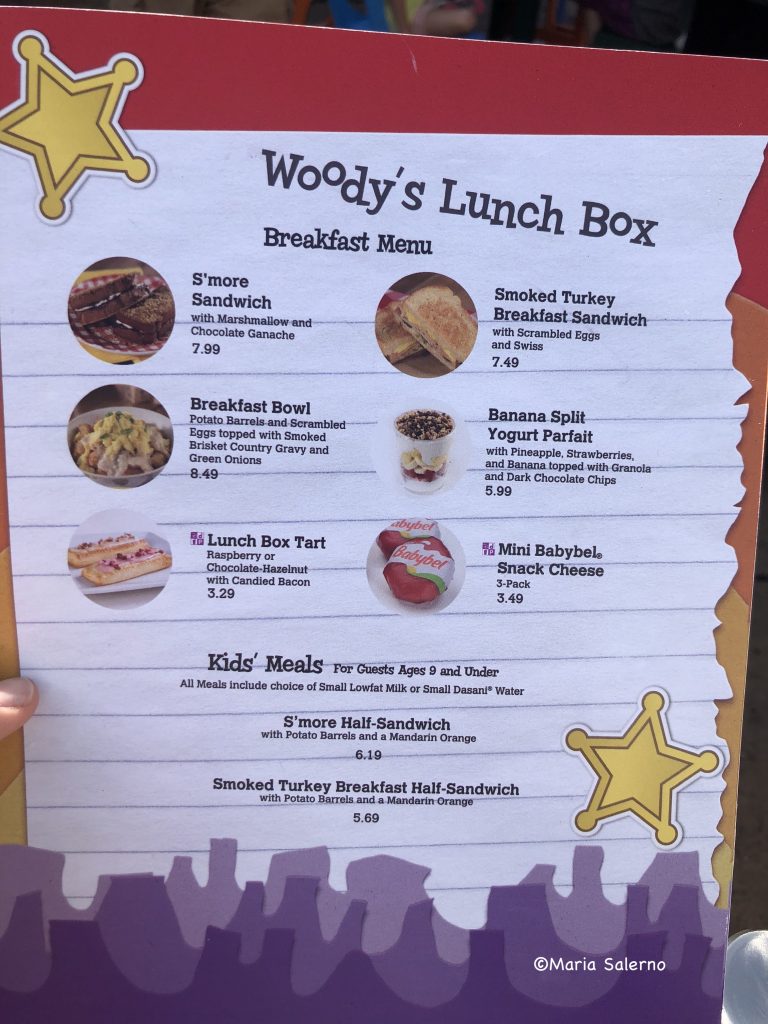 After just a few minutes in line though, I could tell it was moving quickly. Cast Members distributing menus to the queue made the ordering process a snap, and I condone Disney for finally hopping on the bandwagon of expediting long restaurant lines!

Once the ordering was finished though, the wait for my food to be prepared was when I felt the ramifications of the big crowds. It took nearly 15 minutes to be served, and the reason for the back-up in the queue line suddenly became clear. Luckily, we found a table very easily among the limited seating area, and finally, after a long journey…it was time for breakfast!

In the spirit of giving an honest review, we of course ordered multiple items from the menu! The food was created with school days and school lunches in mind, and the choices- like pastry tarts and sandwich-style items- took me right back to my summer days spent eating in my backyard.

First, we sunk our teeth into the smoked turkey breakfast sandwich. The sandwich- complete with sliced smoked turkey, eggs, and cheese- smelled so delicious I actually forgot to take a picture before I took a bite! With one enormous chunk missing, I already had my verdict: the sandwich was tasty, they surely didn’t skimp on the eggs…but the inch-thick eggs were concentrated in the very center of the sandwich, which definitely detracted from my toasty, crispy breakfast fantasy. The eggs and cheese were a great flavor combo, but the addition of turkey gave the whole panini-style sandwich a ‘Thanksgiving leftovers’ feel. I would have definitely preferred ham or bacon over turkey here.

The potato barrels on the side saved the whole dish for me. I know they’re basically tater tots with a different name, but the hot little barrels of potato-y goodness were a great pairing with the sandwich. One thing I can say for the meal is that it is definitely filling and can easily be shared among two people!

The lunch box tarts were saved for our breakfast dessert (note to self: eat dessert after breakfast every day). We got both the chocolate hazelnut and raspberry variety and, from their appearance, I knew exactly why everyone compares them to Pop Tarts…until I took a bite! 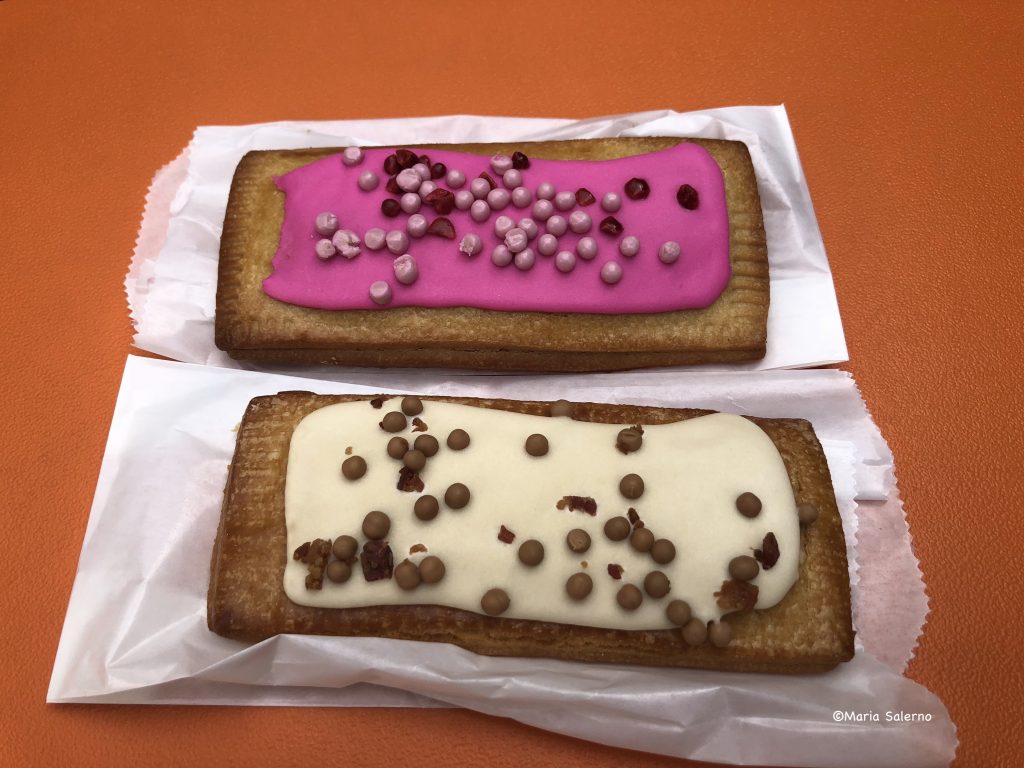 With dough that is flaky and buttery, these babies are a far cry from the cheap Pop Tarts you’ll find on grocery store shelves. The dough is more the texture and flavor of a shortbread cookie, and the sweet raspberry filling complimented the cookie-like frosting perfectly. Pop Tart? Definitely not, tasty? Definitely! 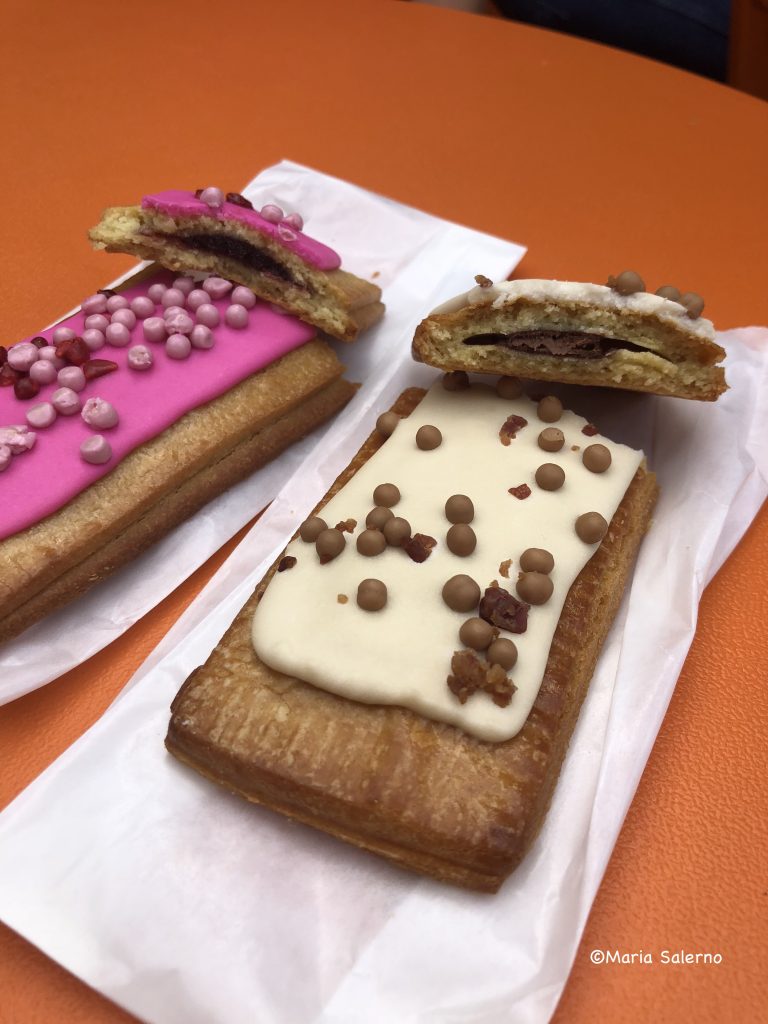 Finally, we saved the chocolate hazelnut lunch box tart for last. With both chocolate and bacon on the ingredient list, this bad boy’s description alone earned its spot as the meal finisher. The flavor was good, but I was let down when I sliced into the tart and found the chocolate hazelnut filling hard, thin, and very unevenly distributed through the pastry. I’m not the biggest bacon fan, but I was looking forward to the flavor pairing and was again let down when the teeny tiny microscopic bits of bacon provided absolutely no flavor contrast. 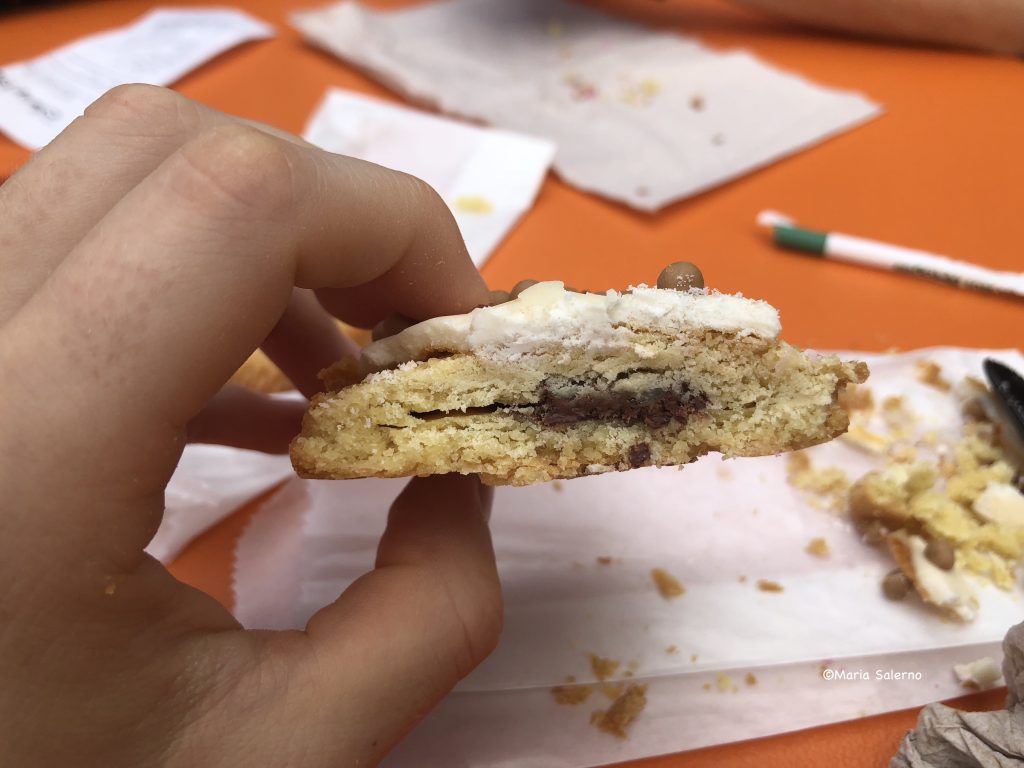 Despite the massive amounts of people visiting Toy Story Land, both waiting for my food and finding a table were pretty easy! One thing is for sure; Disney was prepared for this opening. Overall, the food wasn’t anything out-of-this-world. The themeing and creative menu items though definitely made up for the lackluster breakfast tart. I would give Woody’s Lunchbox a second try for sure, but maybe next time for lunch!