Party with Donald and Friends at Donald’s Dino Bash!

Animal Kingdom has seen several additions within the past few years. Everyone by now is familiar with Pandora – The World of Avatar and of course, Flight of Passage. But have you partied with Donald and friends at Donald’s Dino Bash? If not, you are sure missing out!

Donald’s Dino Bash kicked-off this Summer and was supposed to be a limited-time run but due to its success, was extended indefinitely. The celebration invites all guests to join Donald Duck and friends for a rip-roaring good time that’s over 200 million years in the making. 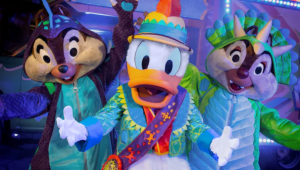 Donald recently learned that his ancestors were actually dinosaurs. To celebrate his new-found knowledge, he decided to take over and decorate DinoLand USA in Animal Kingdom and host a party for the ages.

Guests who attend Donald’s Dino Bash can meet-and-greet with the following characters:

And, wait until you see Chip n’ Dale in their all-new dino-inspired costumes!

To learn more, check out this video below:

Your little ones will roar with delight during Donald’s Dino-Bash! at Disney’s Animal Kingdom Theme Park. Here, they can dance, party and play with pals like Donald, Daisy and Chip ’n Dale in their all-new dino-inspired costumes. #DISNEYKIDS

Have you visited Donald’s Dino Bash yet? Let us know in the comments below!

Let’s start planning your visit to Animal Kingdom and Donald’s Dino Bash! Fill out the form below or send an email to Holly@MickeyTravels.com. As an agent with MickeyTravels (a Platinum Earmarked Agency), I will be on hand to help you with everything from finding your perfect package to nabbing those hard-to-get dining and FastPass reservations. I work with all Disney Destinations. Best of all, my services are absolutely FREE. Get in touch via email at Holly@MickeyTravels.com or calling 954.401.9577. Also, make sure to CLICK HERE to follow along with my Facebook page for all things Disney and giveaways!