Tonight, a number of magical moments captured the hearts and imaginations of Magic Kingdom guests during the very first Very Merriest After Hours special event. Snow mystically fell on Main Street U.S.A., and Mickey’s Once Upon a Christmastime Parade made its triumphant return. The spectacular moment marked the first time that a full parade went down the iconic trail since March 2020. 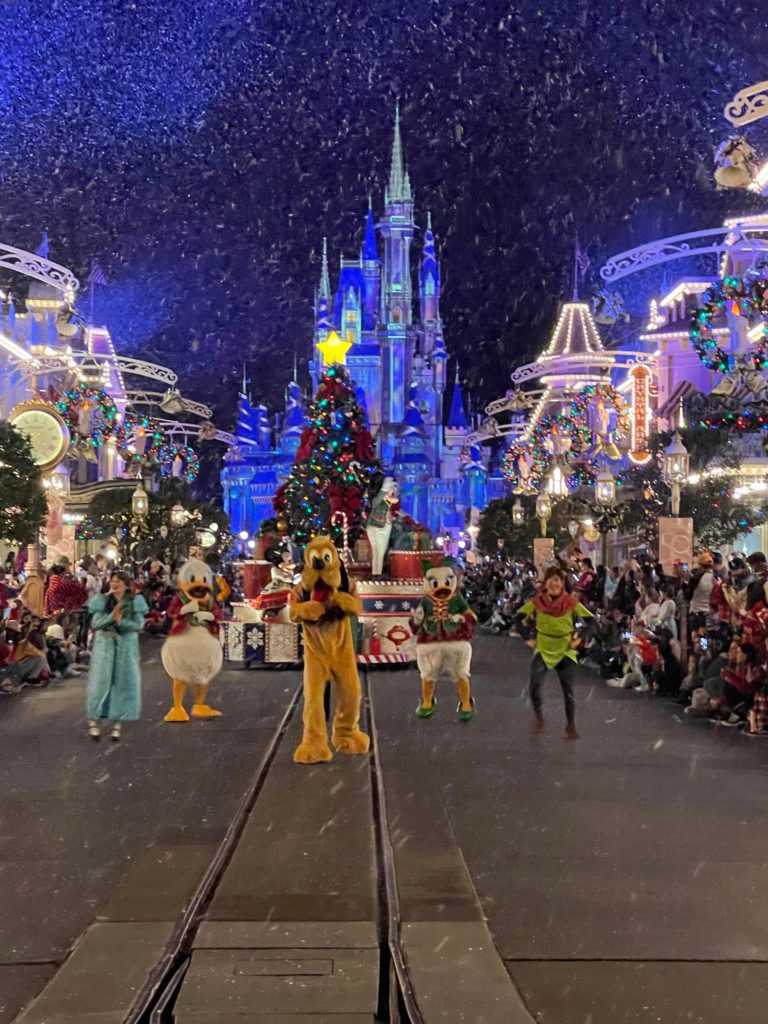 Mickey, Minnie, Donald, Daisy, Pluto and the gang kicked off the parade with other classic favorites like Peter Pan and Wendy. 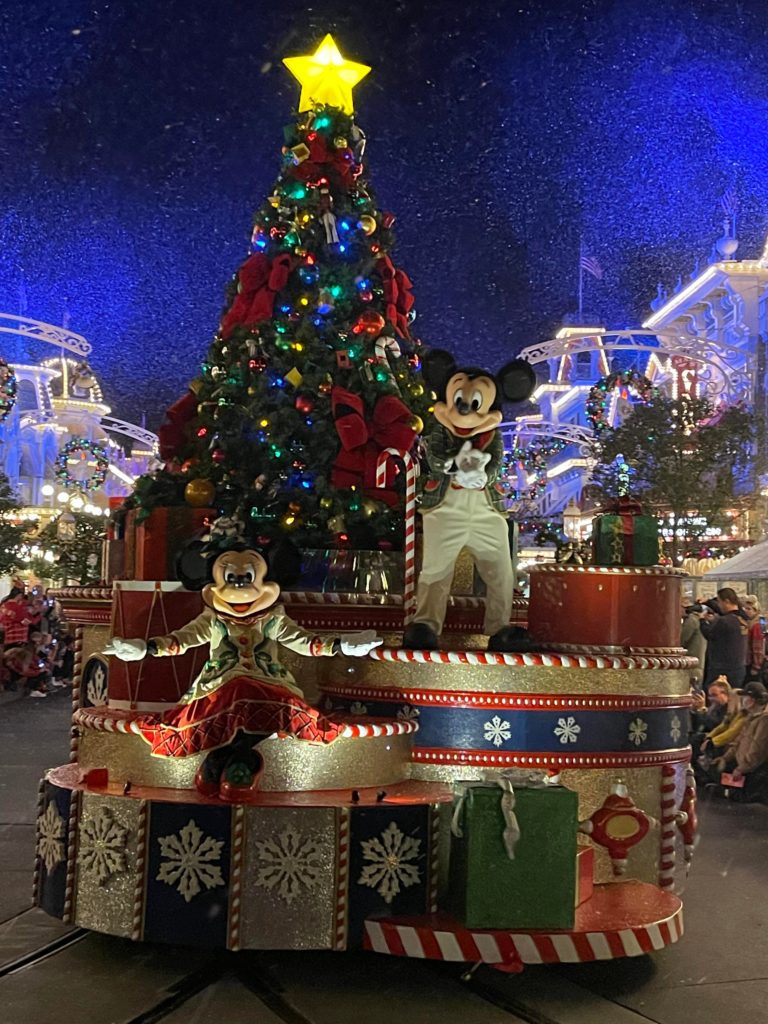 Of course, the hosts of the parade switched into their holiday best prior to the parade, after wishing a fond farewell to guests previously in the evening decked in their 50th anniversary attire. 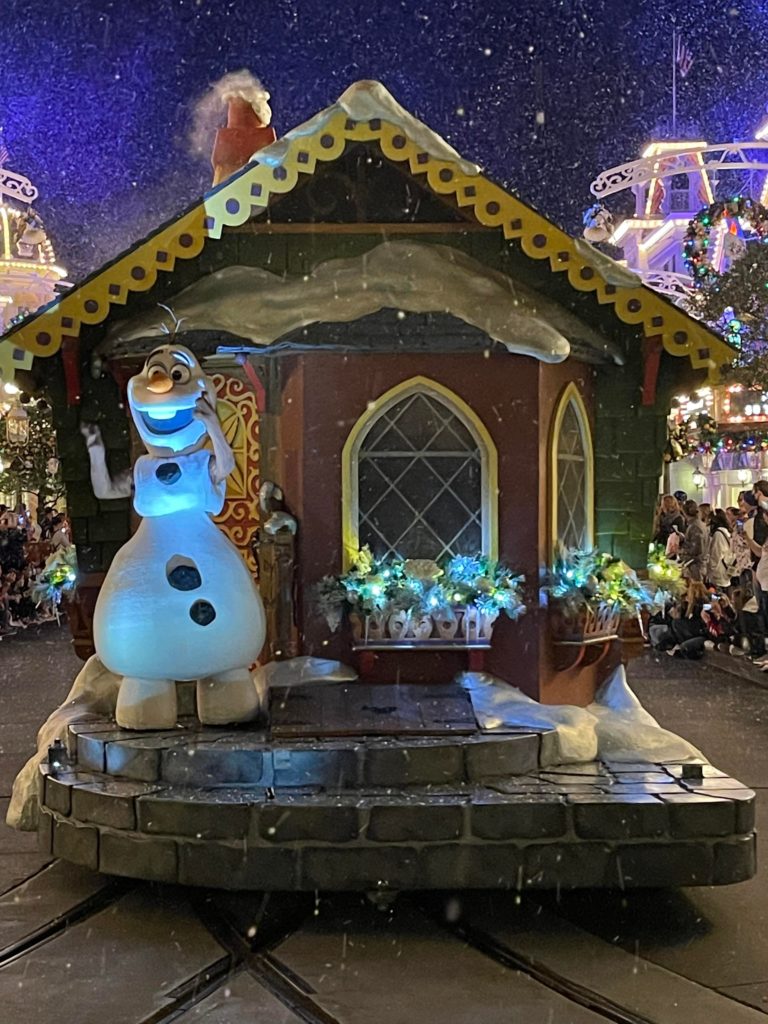 Winter favorites, incluidng Kristoff and Anna danced down the street with Olaf leading off the “Frozen”-themed segment of the spetacle. 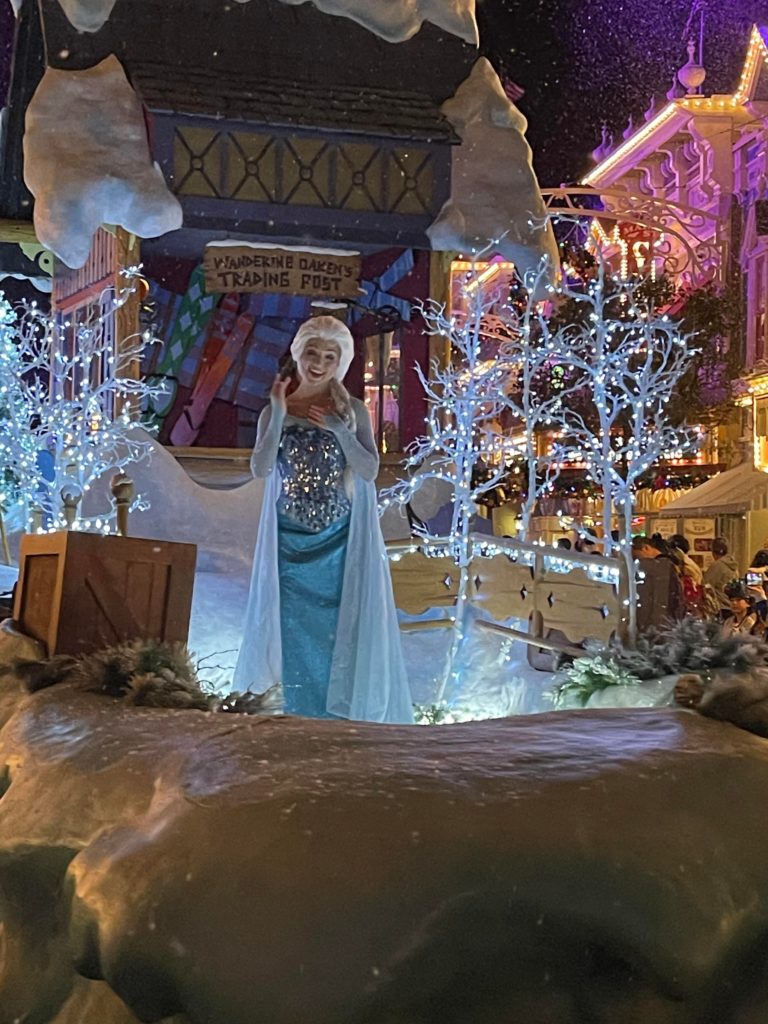 Elsa manifested her own personal flurries aside the Wandering Oaken Trading Post as well. 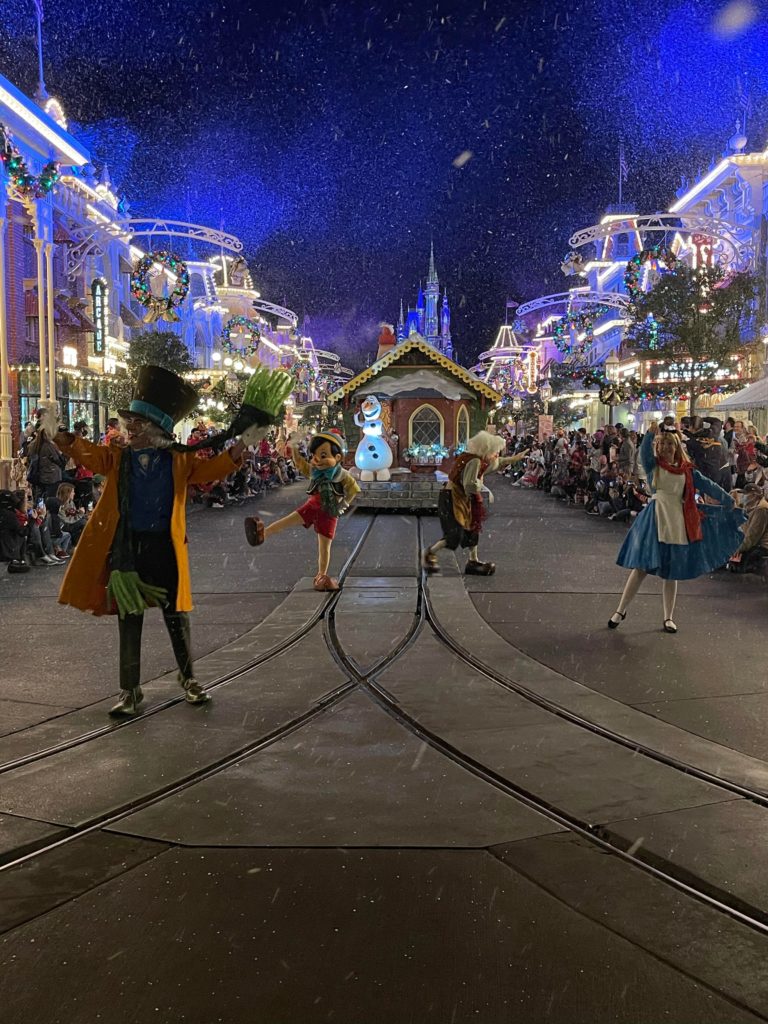 The Mad Hatter and Alice joined Gepetto and Pinocchio to celebrate the holiday season joining the list of the more nostalgic favorites featured in tonight’s parade. 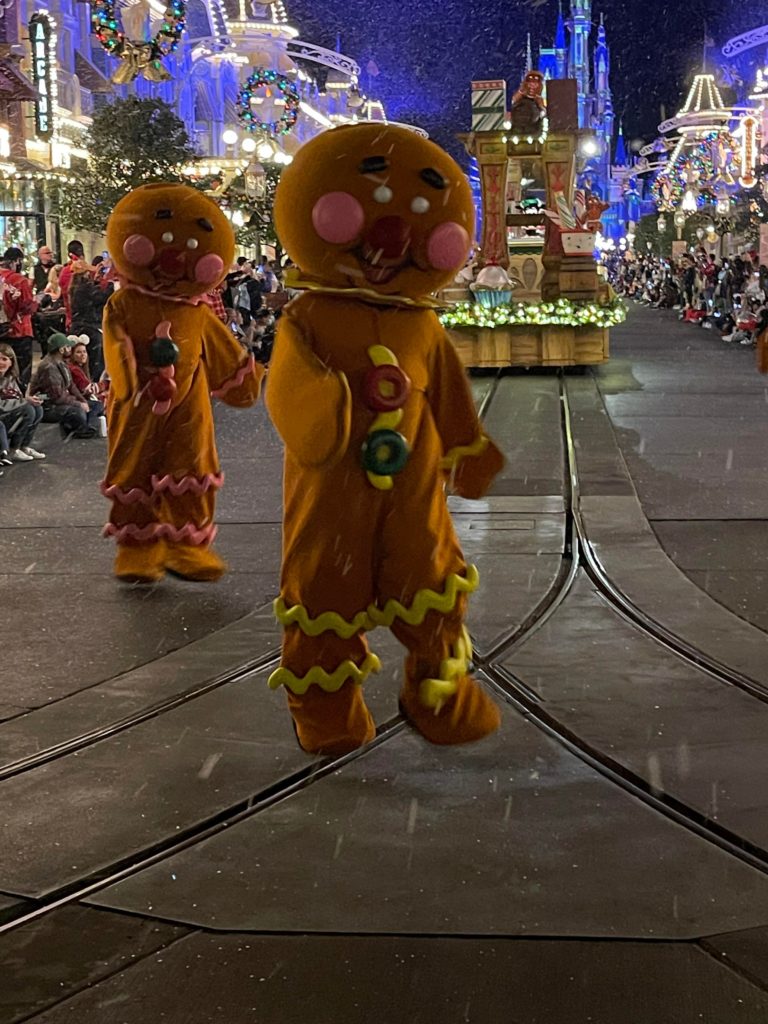 Gingerbread cookies dazzled guests waiting for the parade to reach Town Square, perched on curbs in a scene that many have been waiting for months to see. 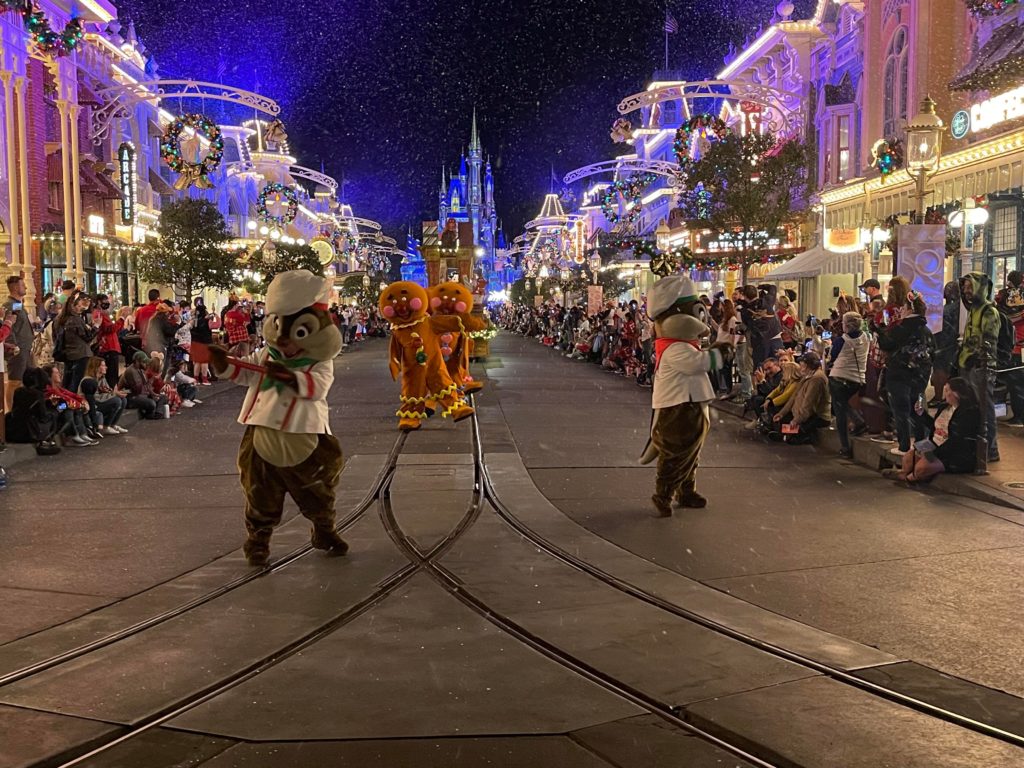 Chip and Dale joined the flavorful delights as they introduced the sweeter side of the darling performance. 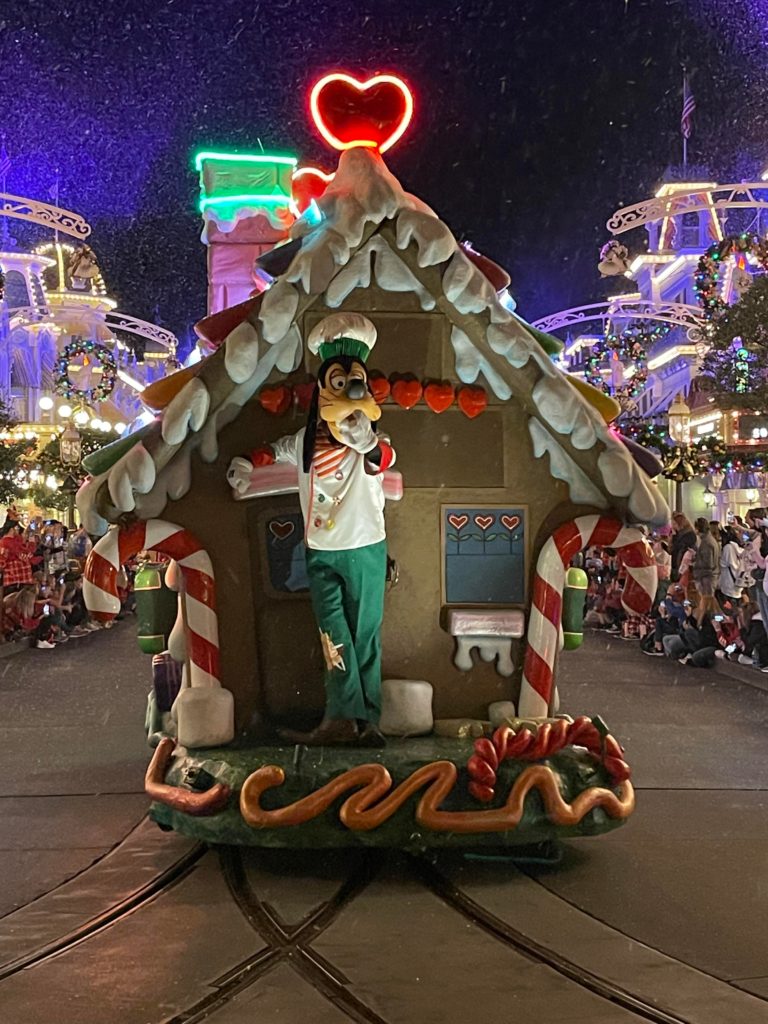 Of course, with Goofy and Max in the kitchen, things are bound to get a little zany while preparing for this season’s holiday feasts. 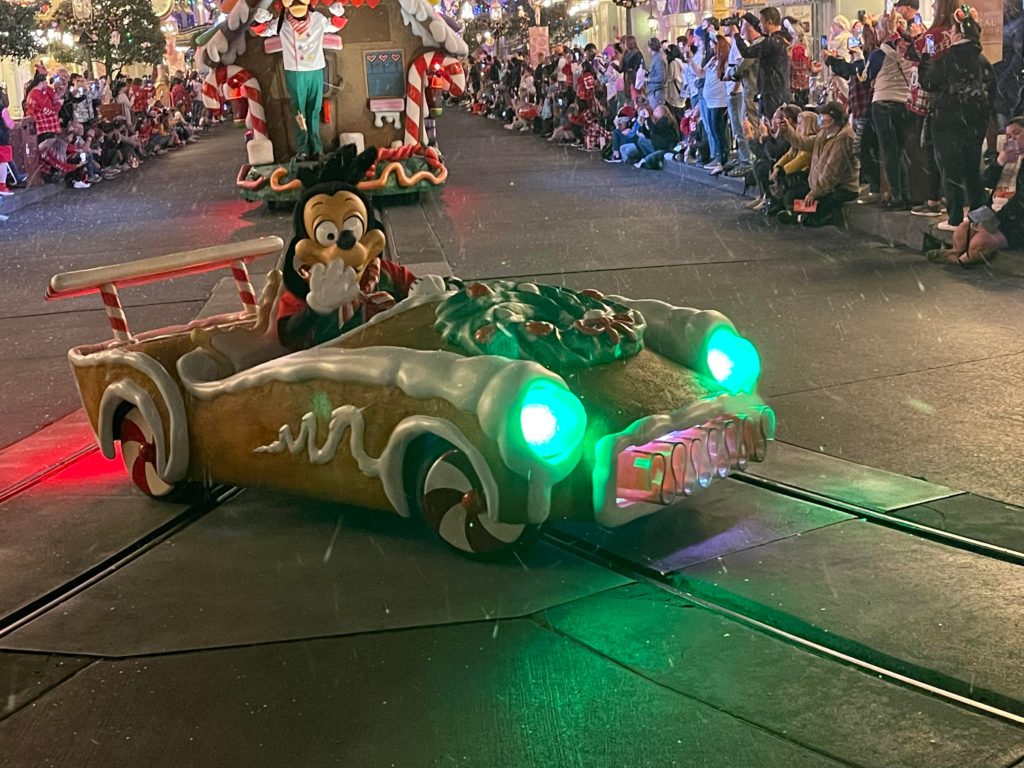 Clarabelle Cow seemed to have things almost under control though in the baking department as she passed by with joyful commentary for the crowd. 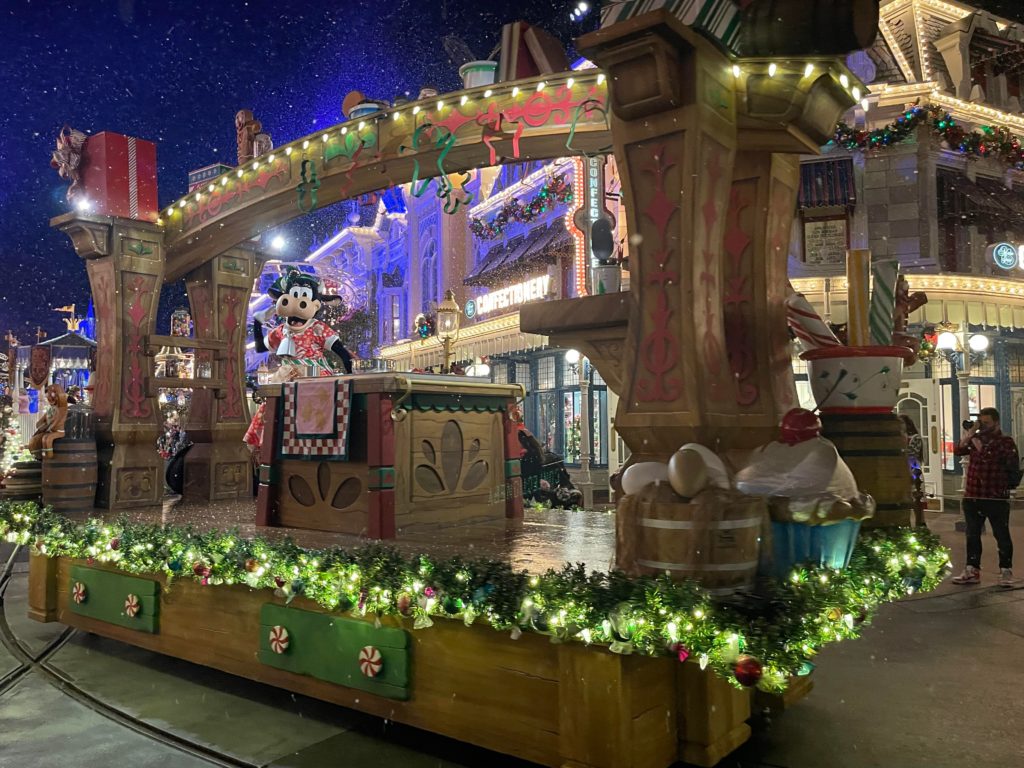 Disney royalty also made an appearance in the parade. Clad in their winter coats due to the cooler temperatures, Belle, Rapunzel, Tiana and Snow White led the brigade of princesses. 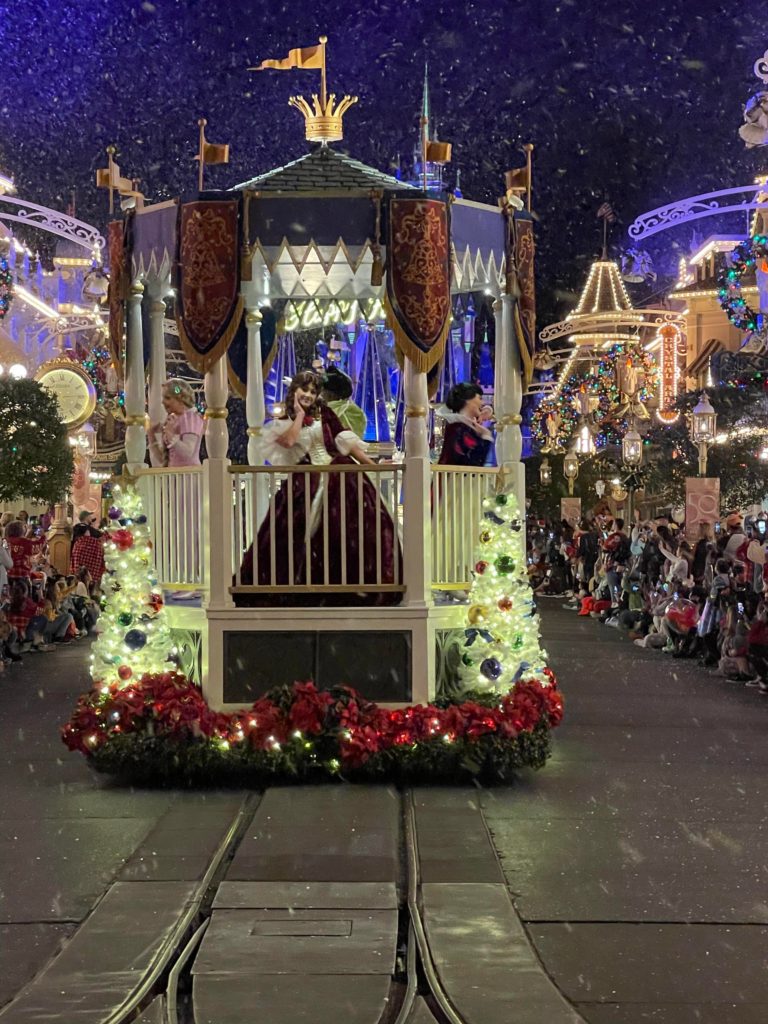 Ariel, Sleeping Beauty, Cinderella, Jasmine, Elena, Merida and even the Fairy Godmother also joined together to wish everyone a happy holiday season. 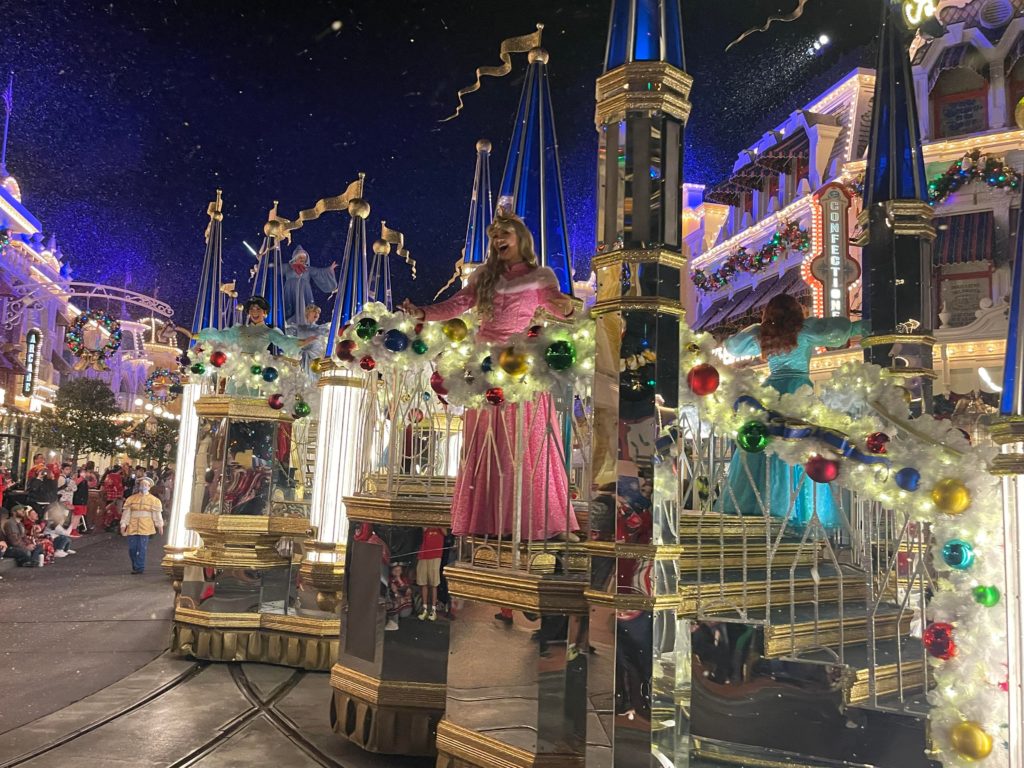 Of course, no Disney holiday parade would be complete without the appearance of the toy soldiers, who first appeared in the 1961 Disney film, “Babes in Toyland.” 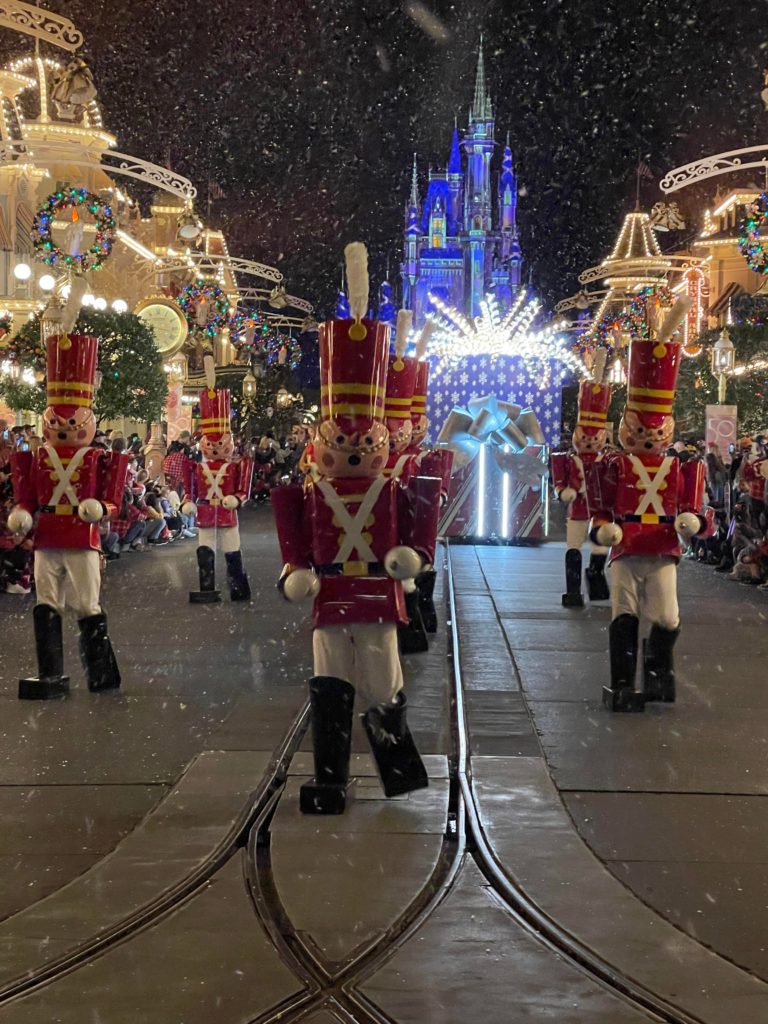 The snow continued to fall as Santa’s reindeer led the way for his sleigh down Main Street U.S.A. to conclude the parade. 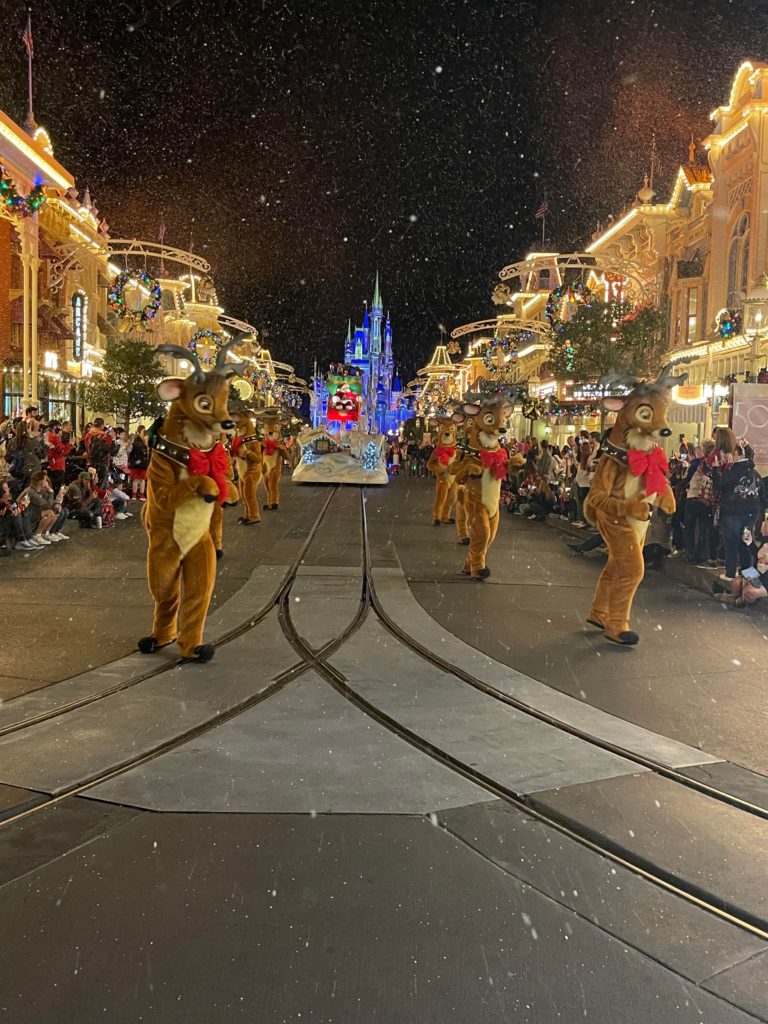 Santa called out well wishes to boys and girls in the crowd as he passed through the colorfully lit pathway. 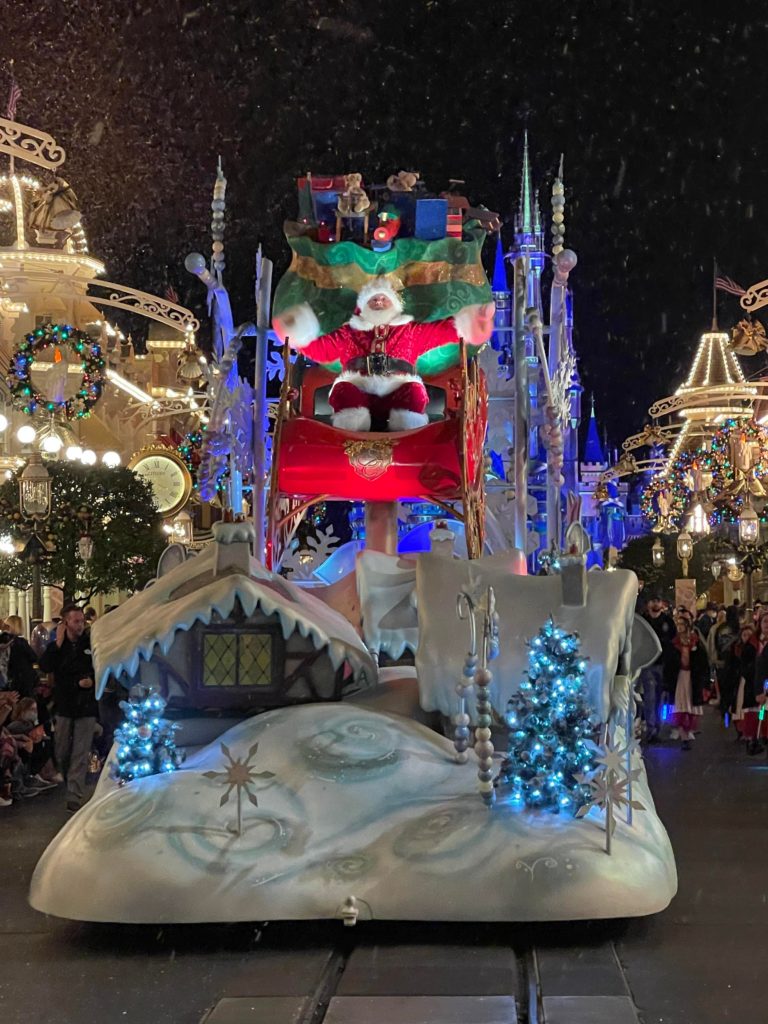 Many rejoiced not only at the sight of the gleeful holiday icon but also at the return of such incredible entertainment to the Walt Disney World Resort. 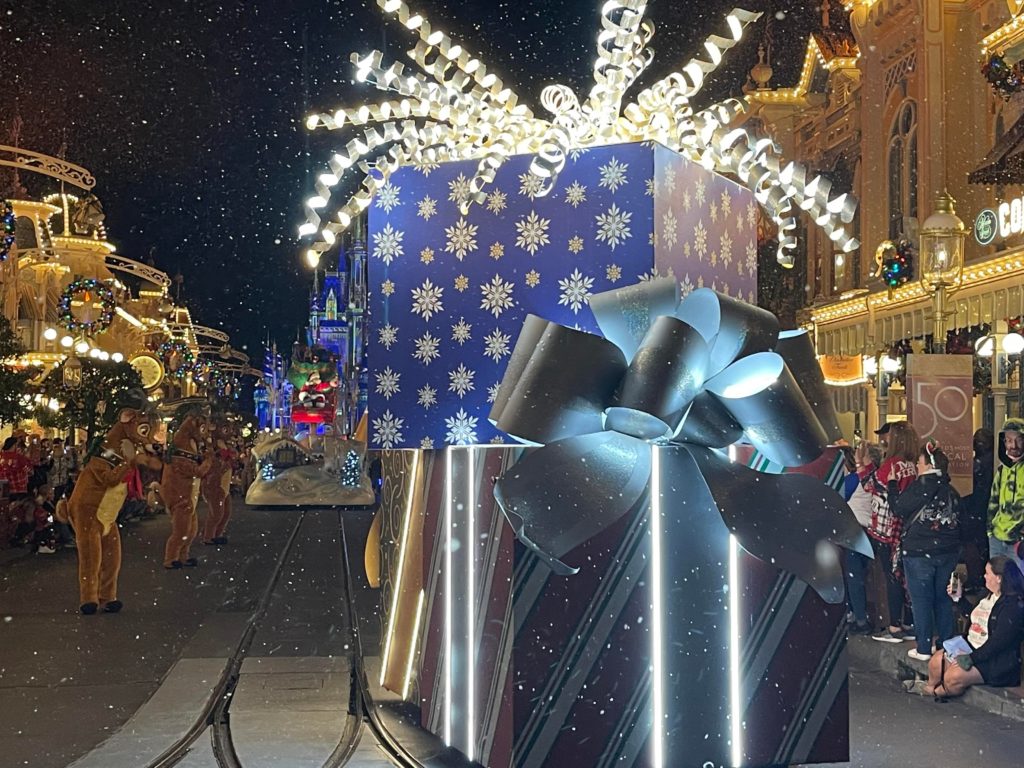 The evening has certainly been a gift to guests. Very Merriest After Hours runs on select nights in November and December with tickets still available for select nights.