MickeyBlog is back at the Magic Kingdom this morning where things are a lot quieter than they were over the weekend. We popped by the Emporium where we noticed several new 50th Anniversary Christmas Ornaments have arrived.

Because we believe that it’s never too early to start planning for the holidays, we thought we’d share a few of our favorites with you below. 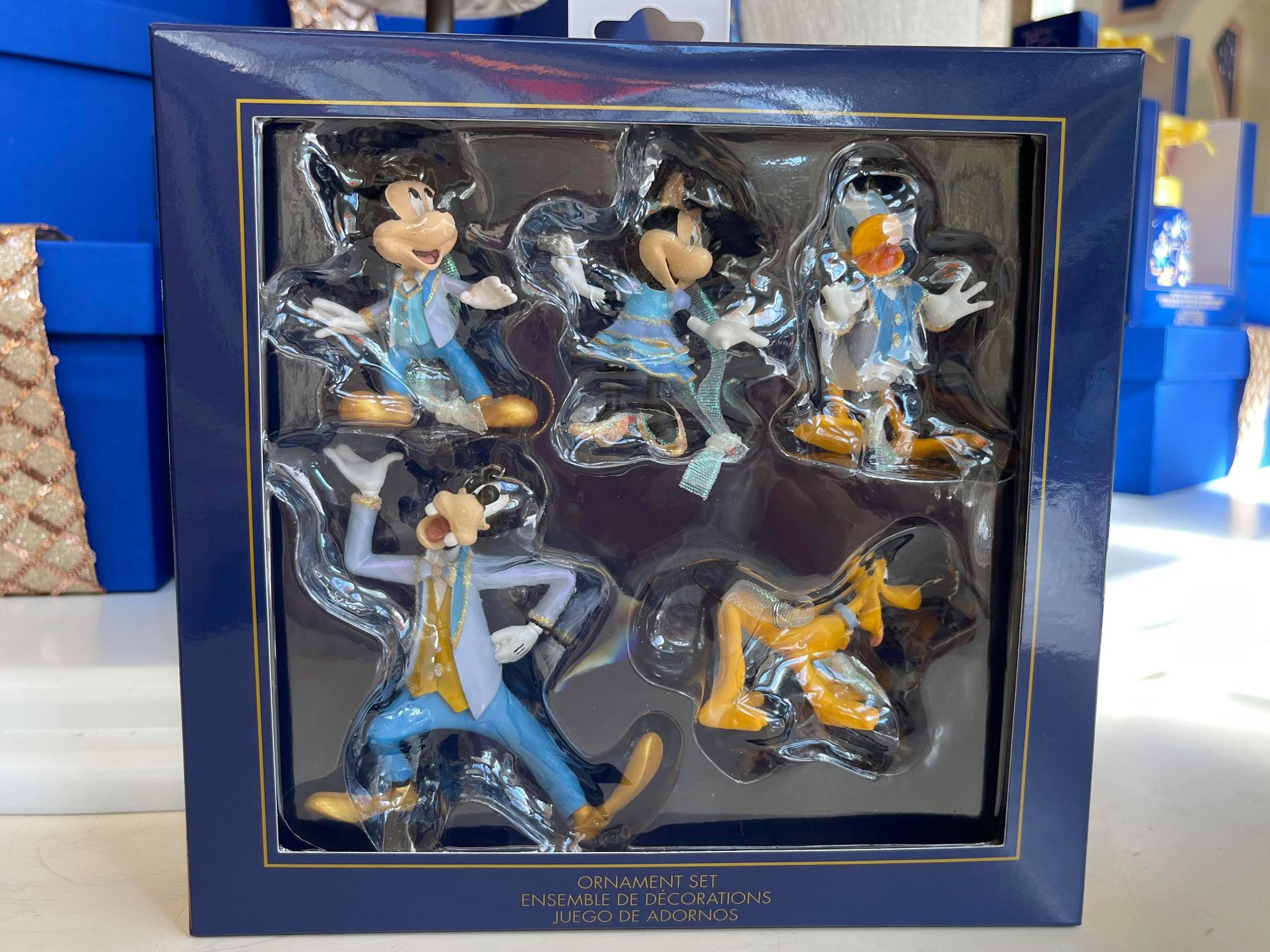 First up is this adorable ornament set featuring Fab 5 figures! 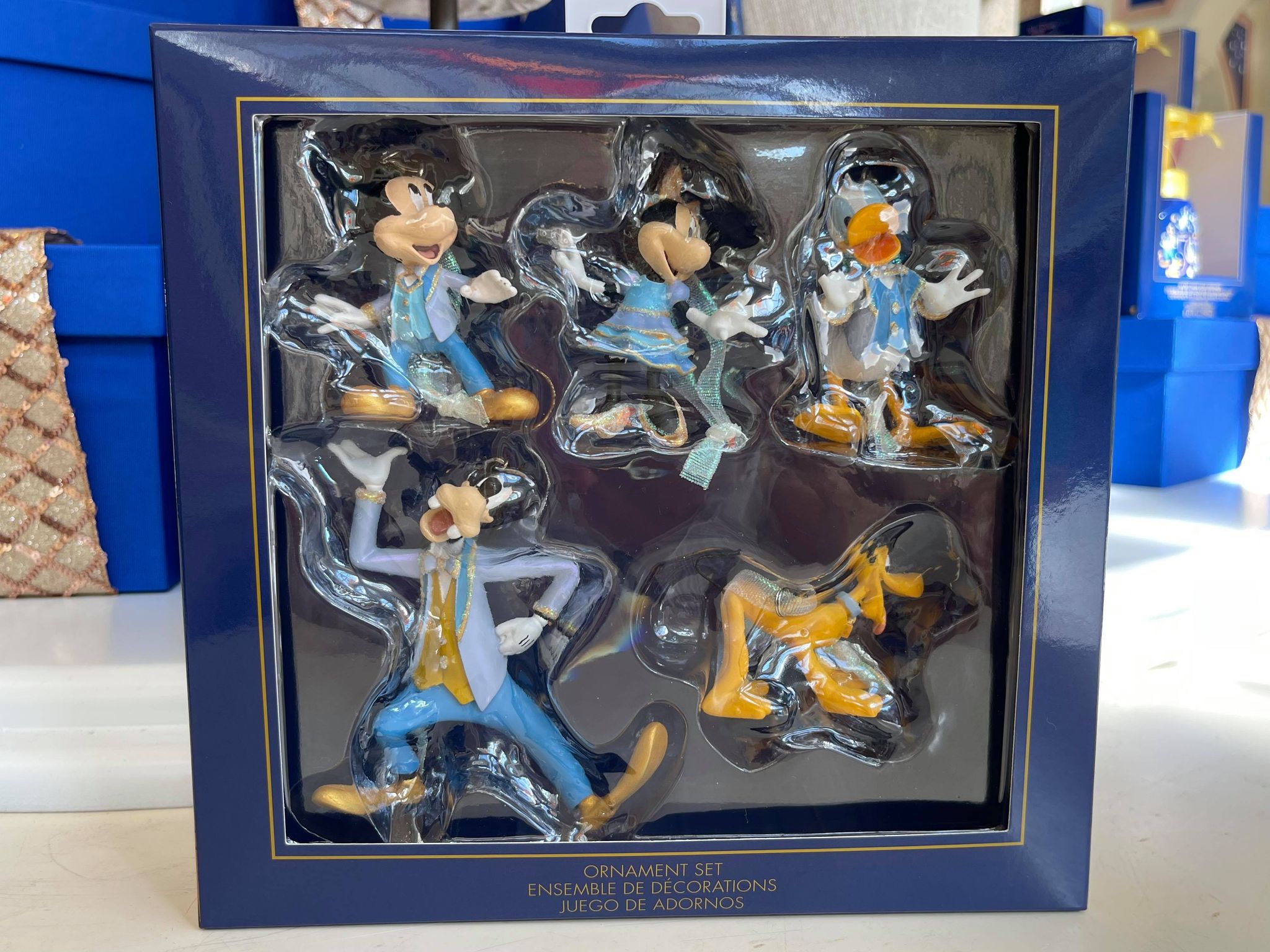 You’ve got Mickey, Minnie, Pluto, Goofy and Donald all dressed up in their 50th Anniversary best! 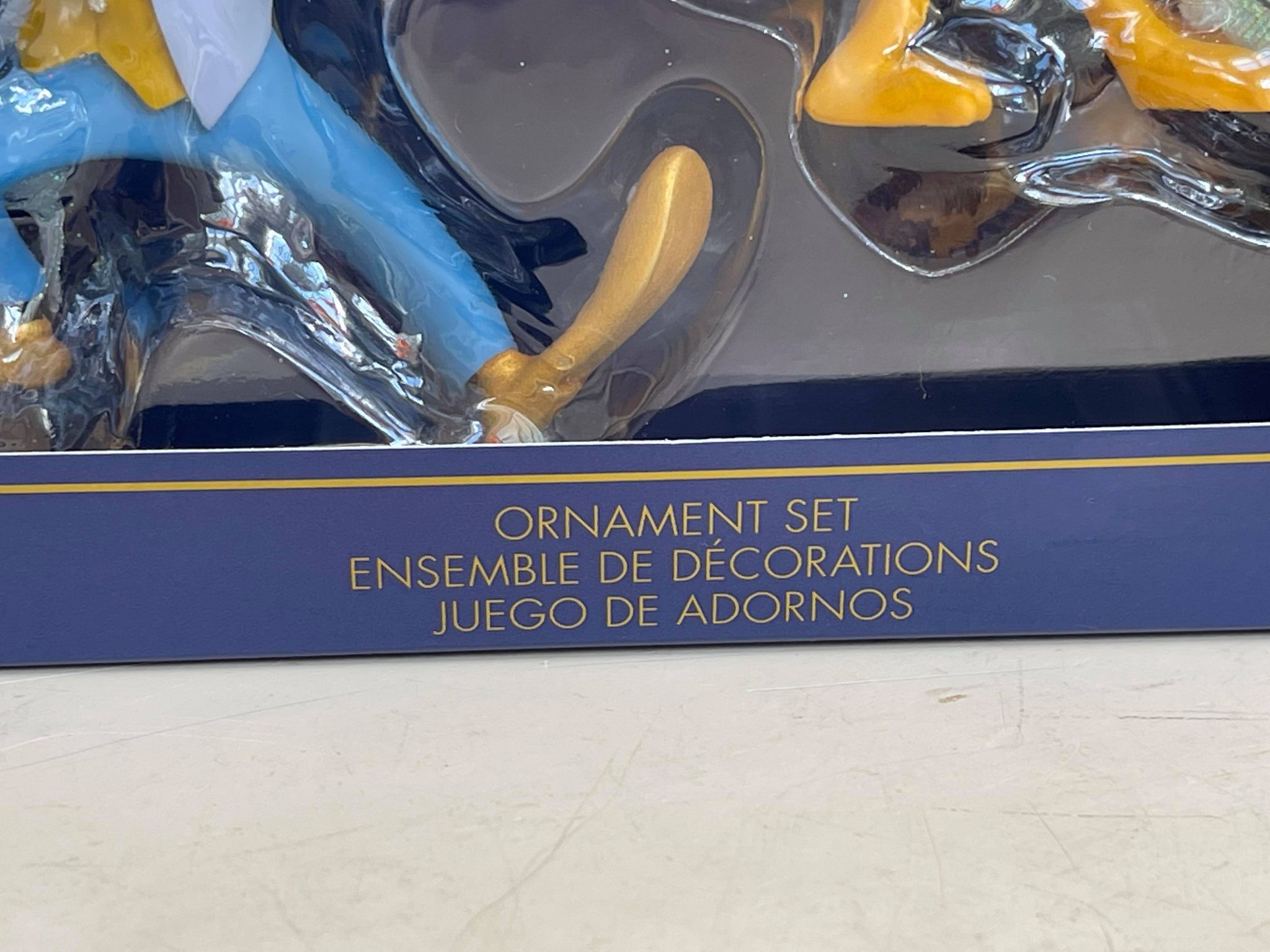 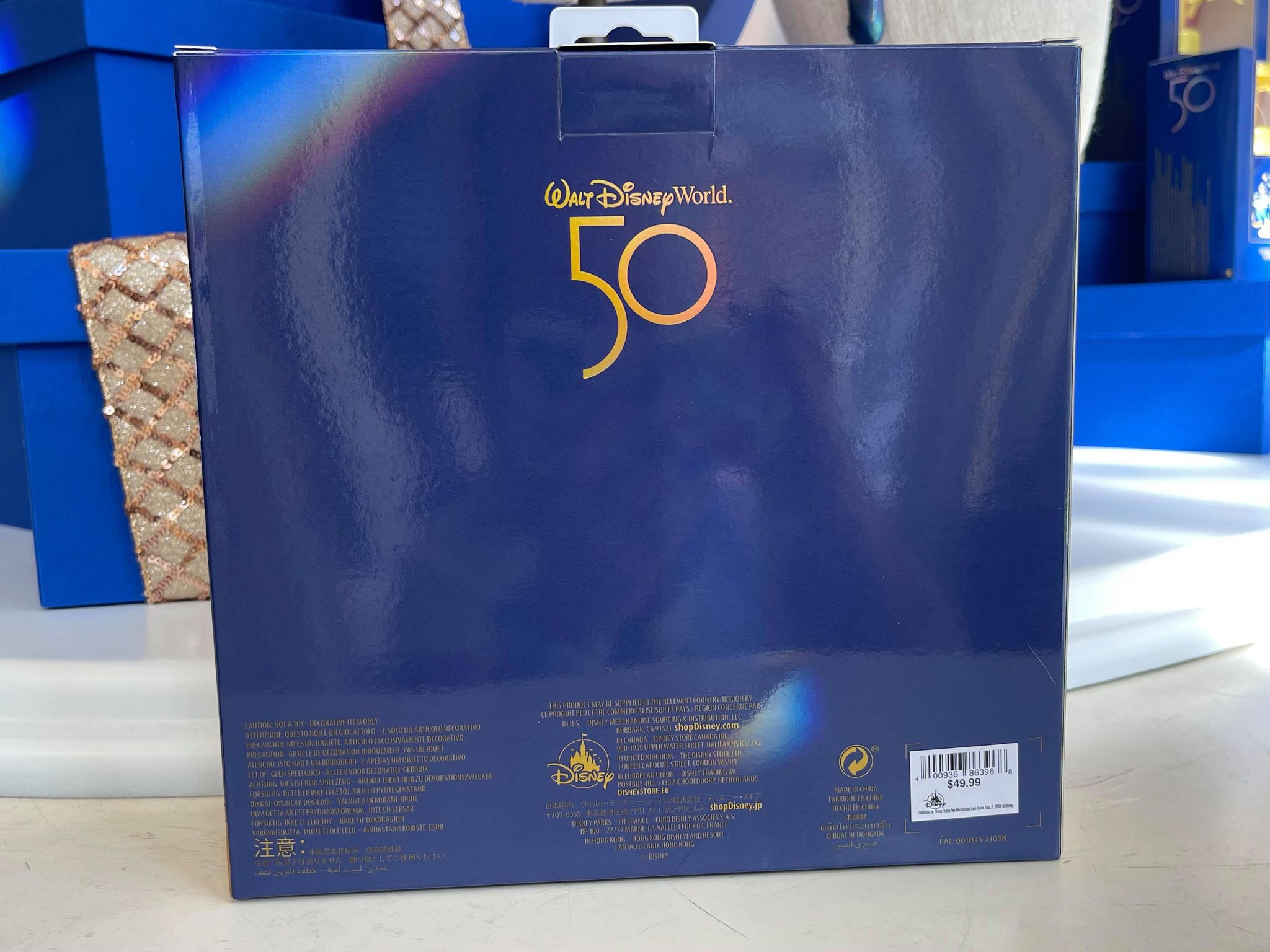 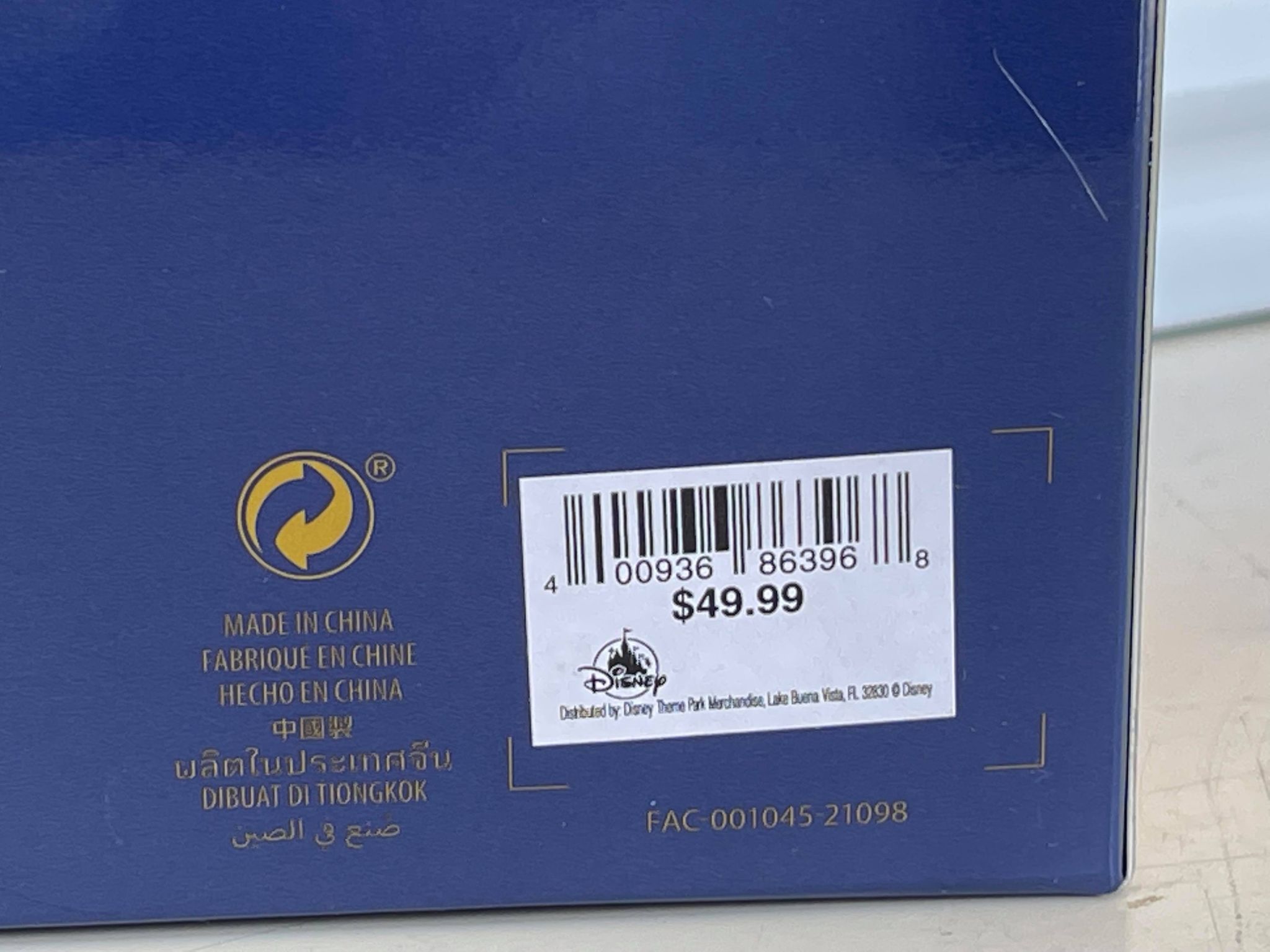 As you can see the set retails for $49.99 and can be found at the Emporium while supplies last. 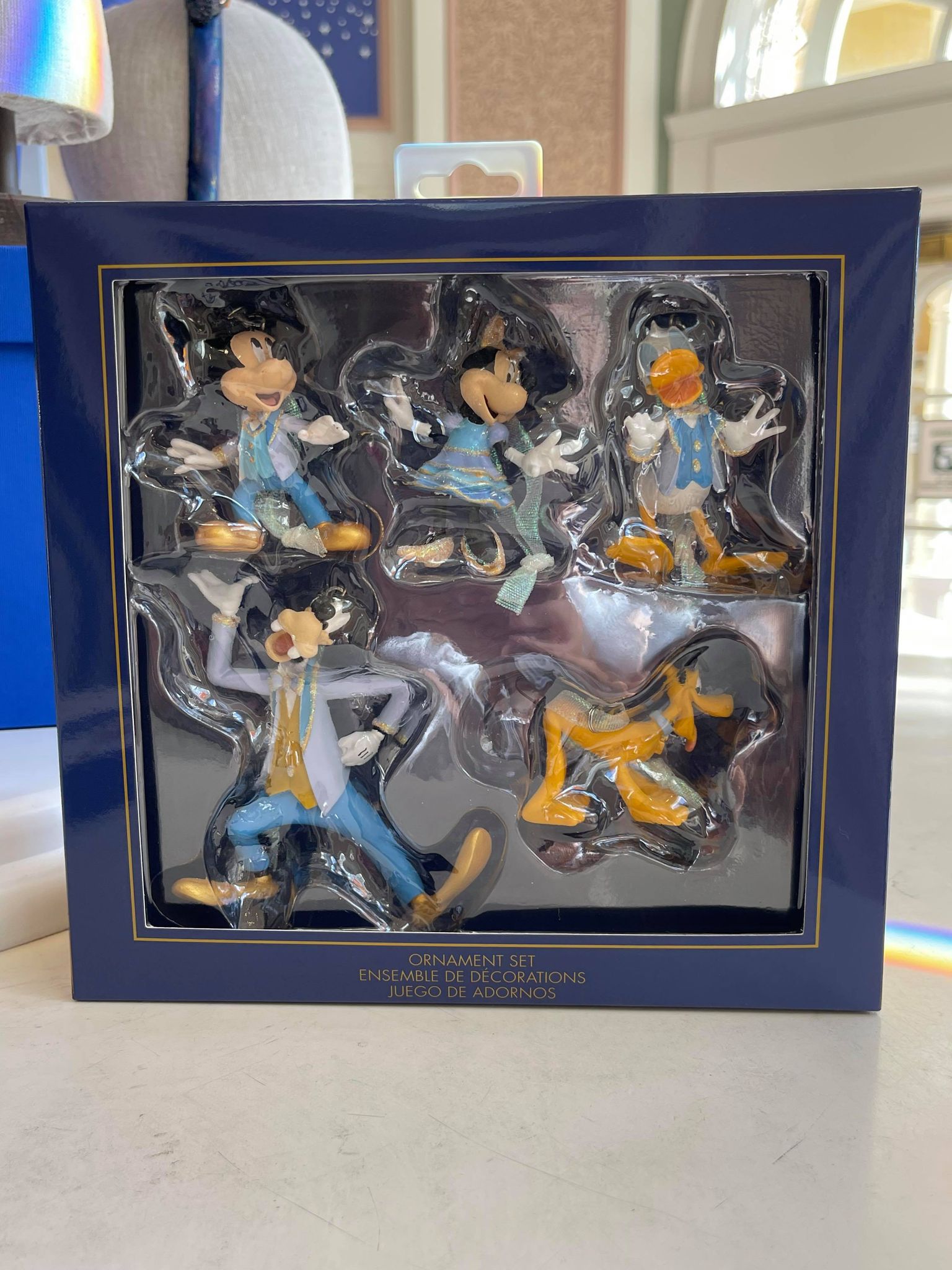 This will be a real collectors item 50th Anniversary items will only be at the parks for a limited time.  Also, each of the characters are wearing their 50th Anniversary outfits in the special EARidescent colorway. 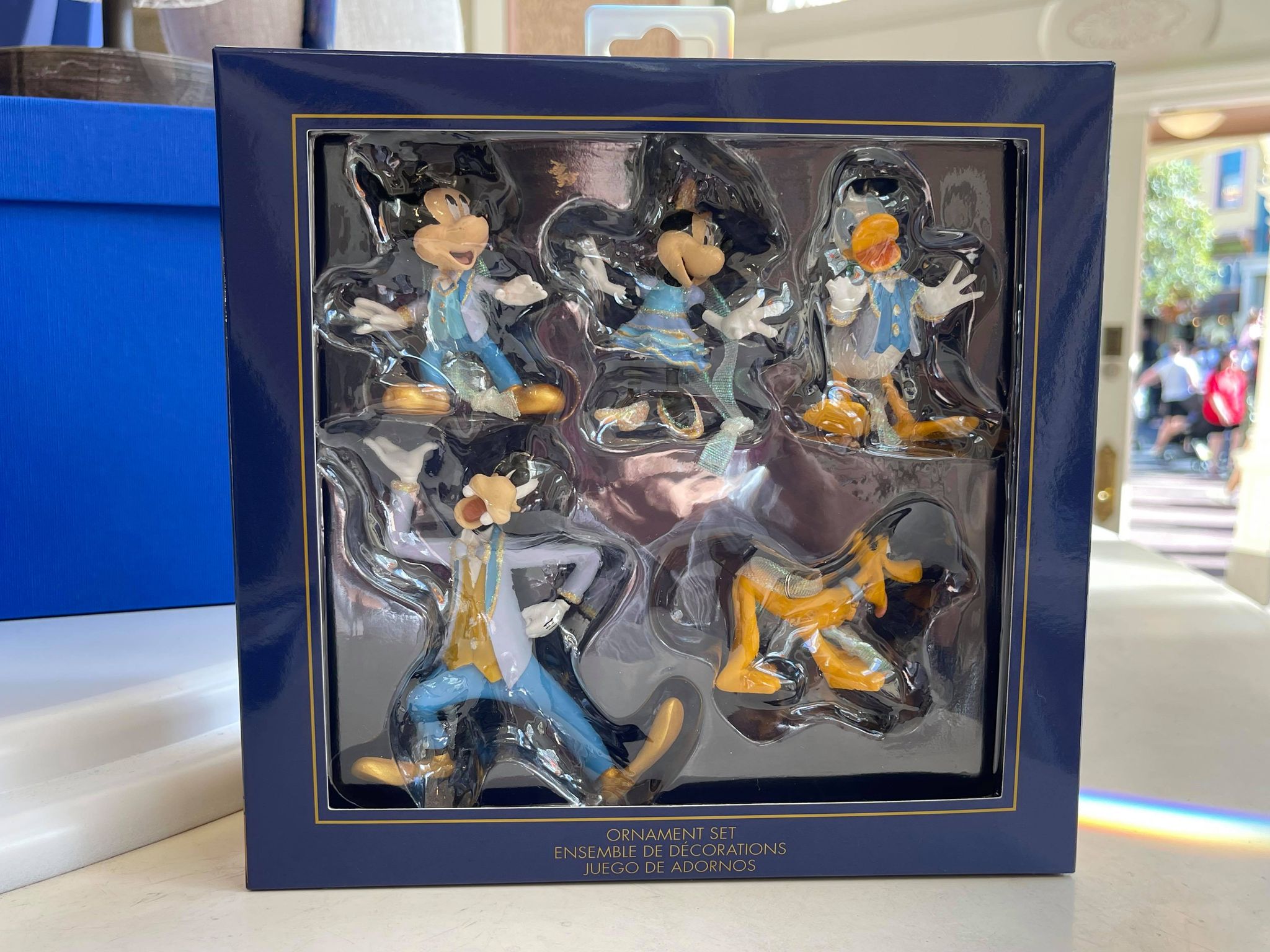 And speaking of figures there are also these standalone Mickey and Minnie ornaments. 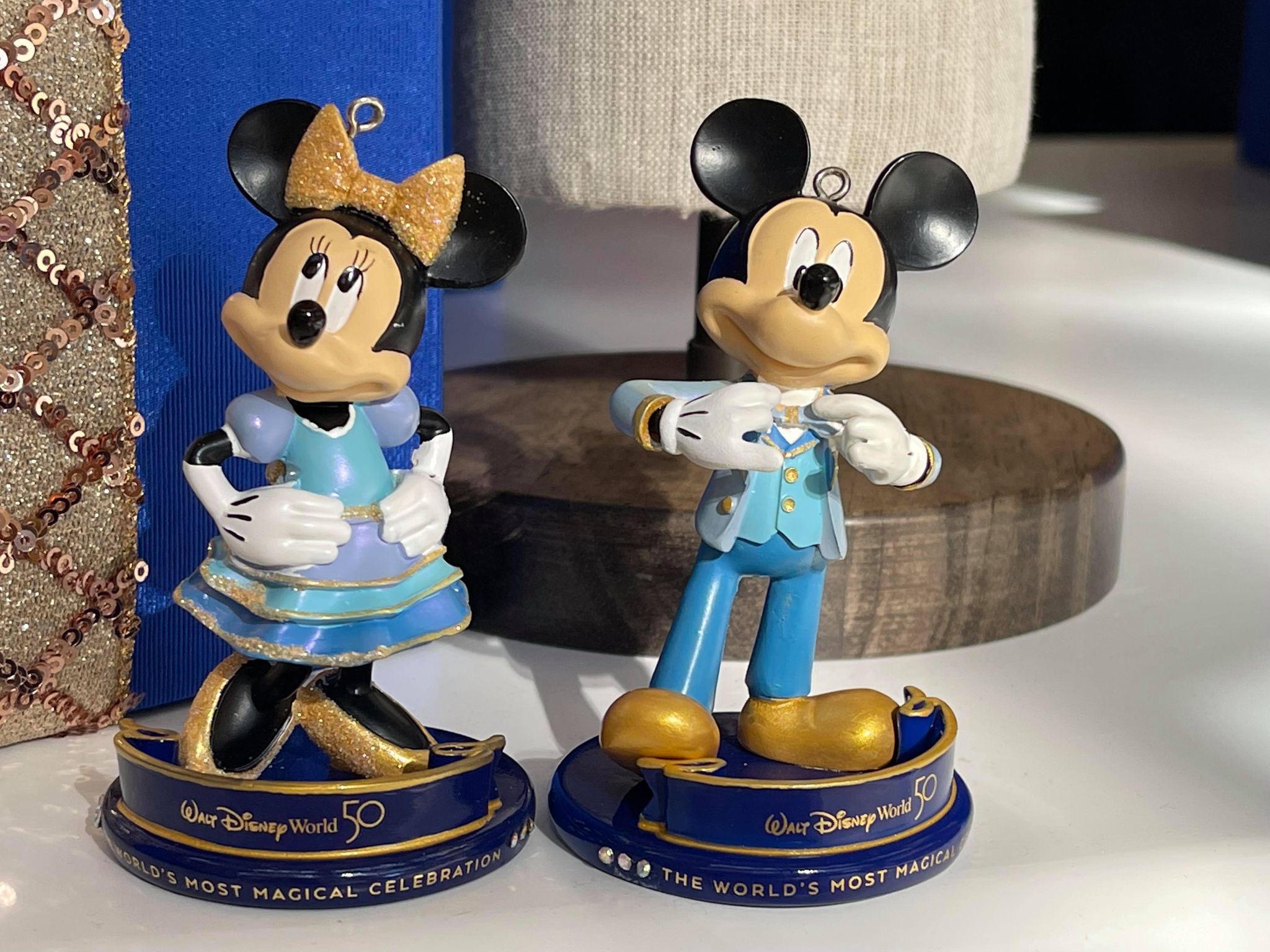 Again they feature this beloved duo in their EARidescent costumes. 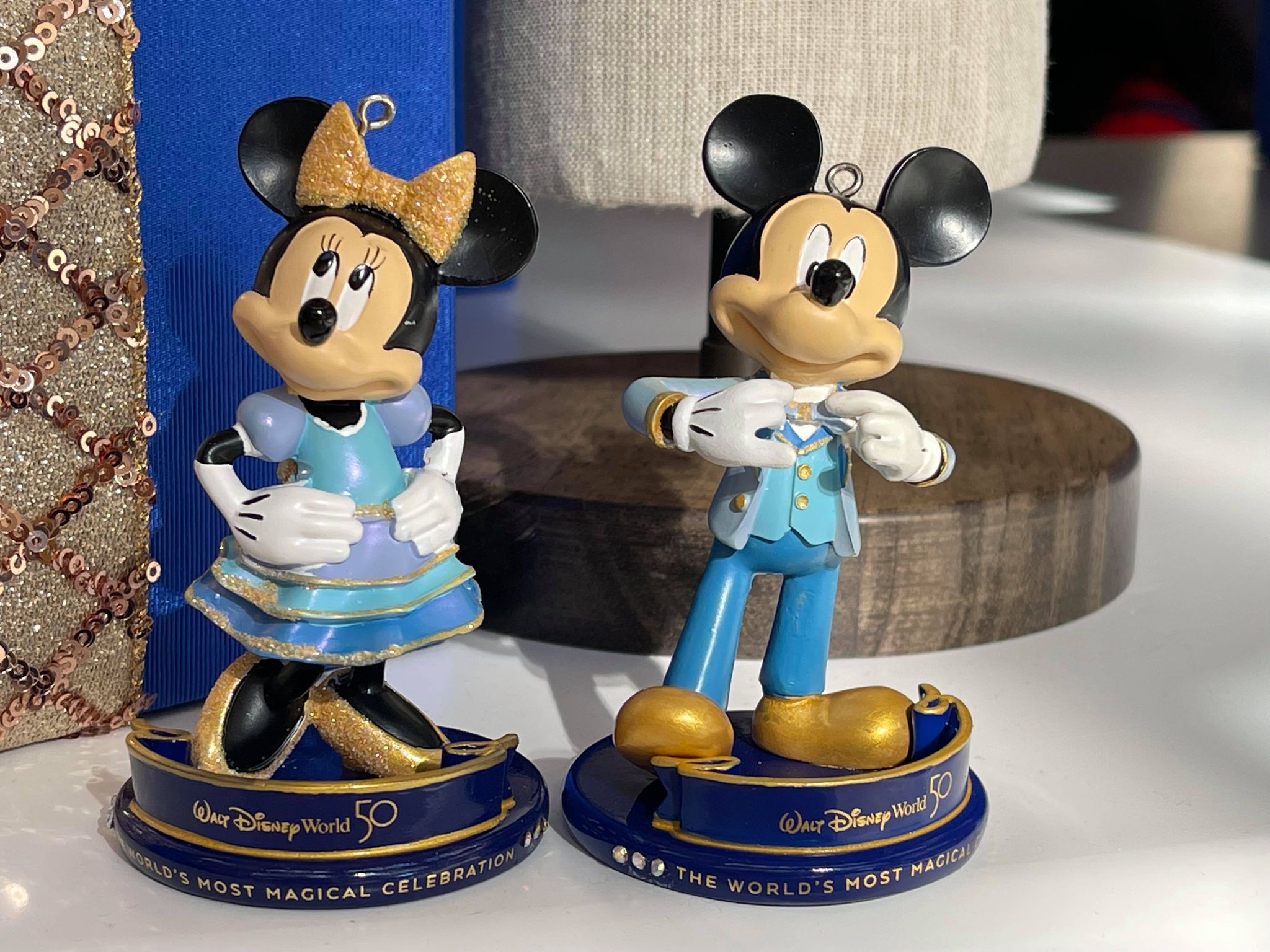 The both stand on a base that has Walt Disney World 50th Anniversary branding. 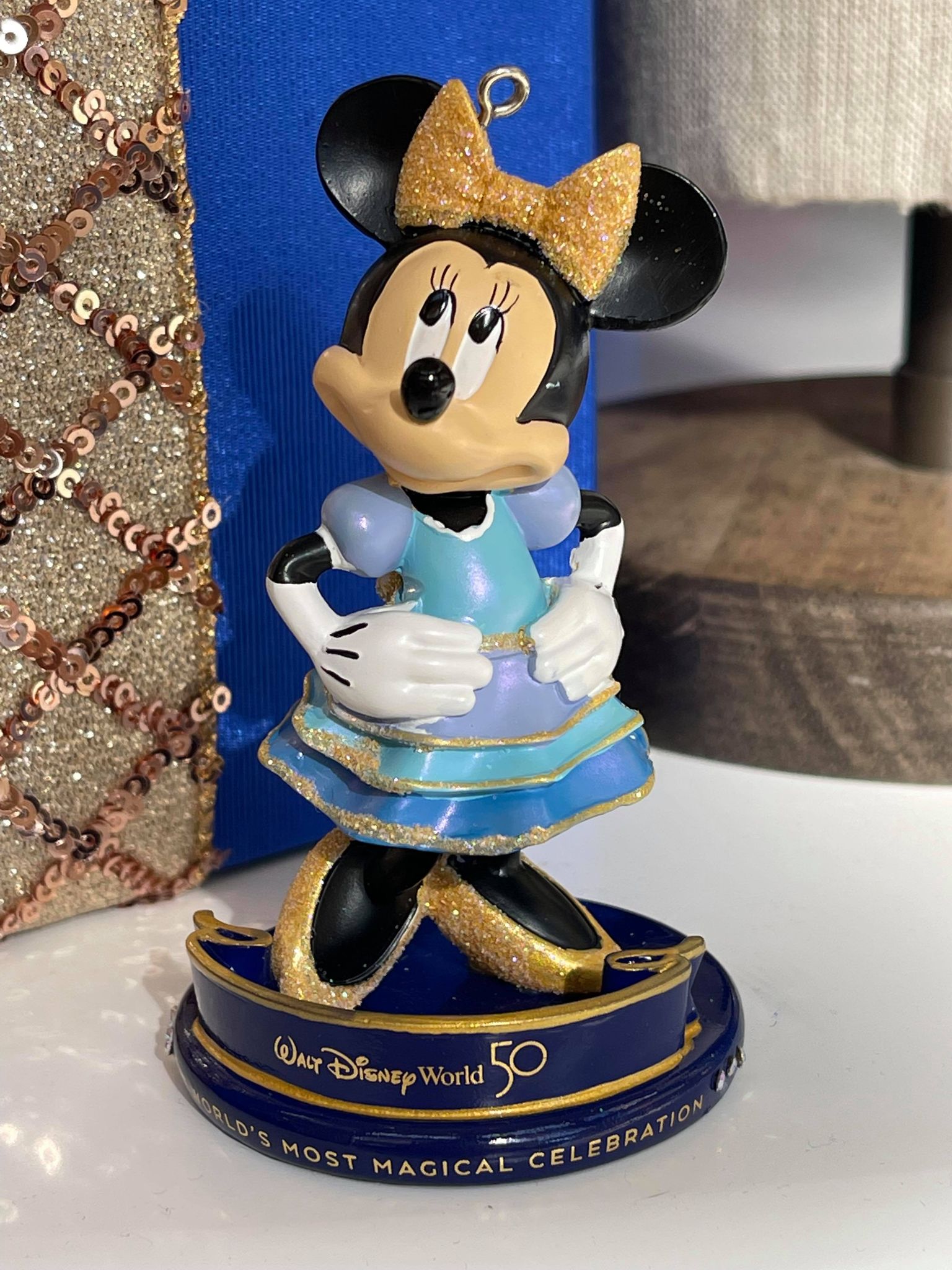 At the bottom of their stand it also reads “The World’s Most Magical Celebration.” 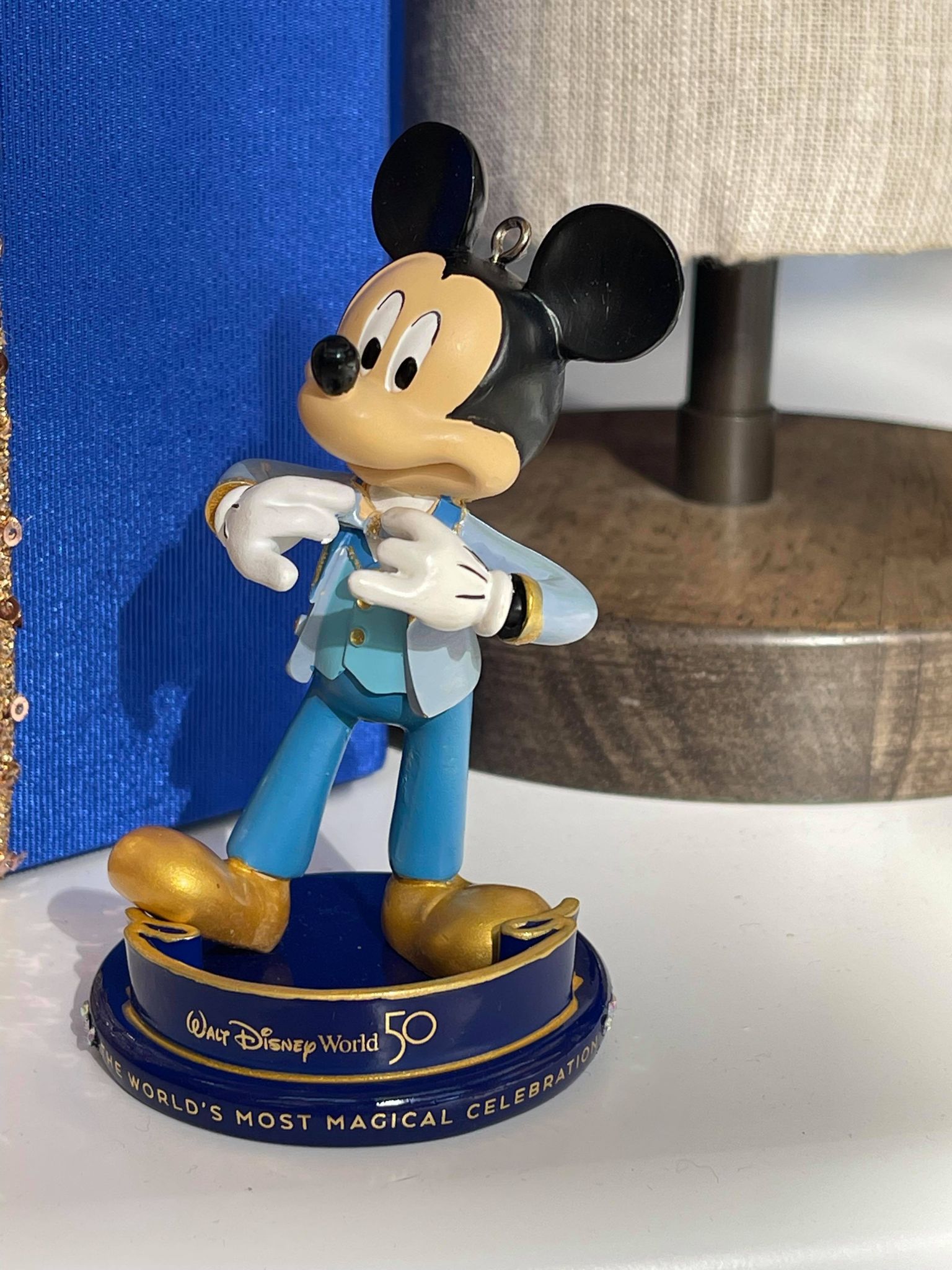 You can complete your set with the addition of this 50th Anniversary photo ornament below. 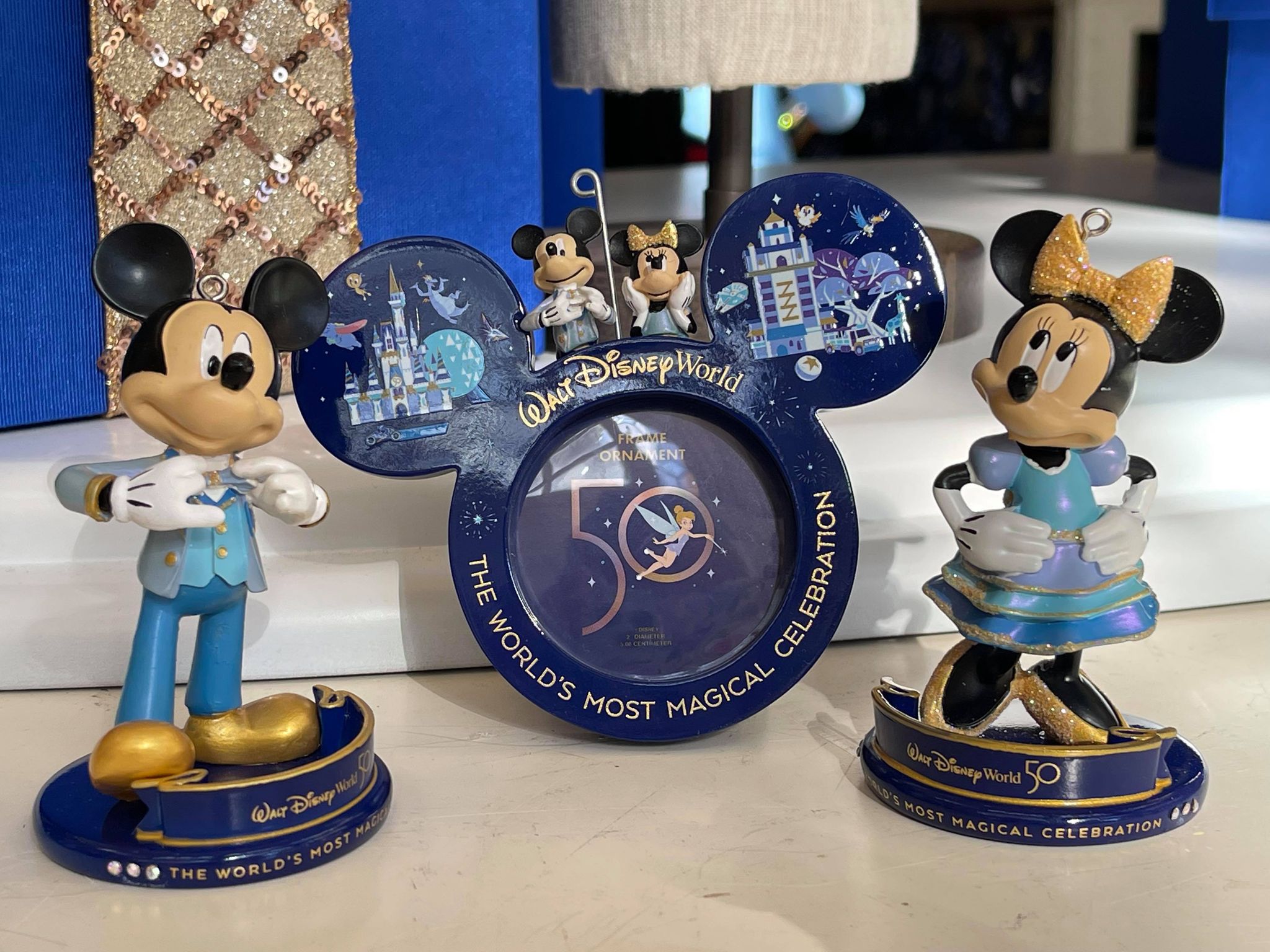 The ornament is in the shape of  Mickey icon. It features miniature figures of Mickey and Minnie at the top. 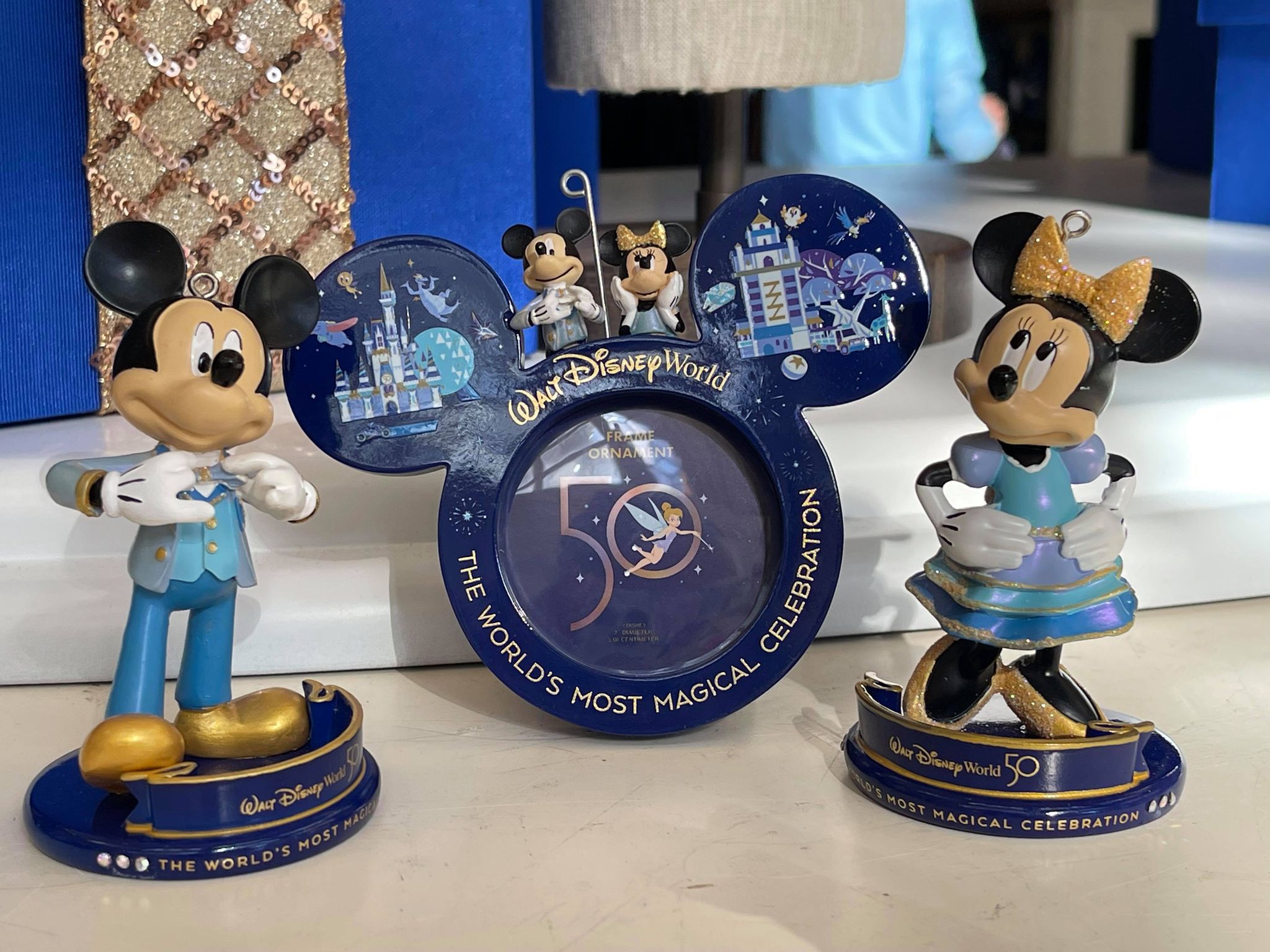 Each of the ears has artwork featuring iconic landmarks from each of the Walt Disney World theme parks.  This includes Cinderella Castle, Tower of Terror, Tree of Life and Spaceship Earth. 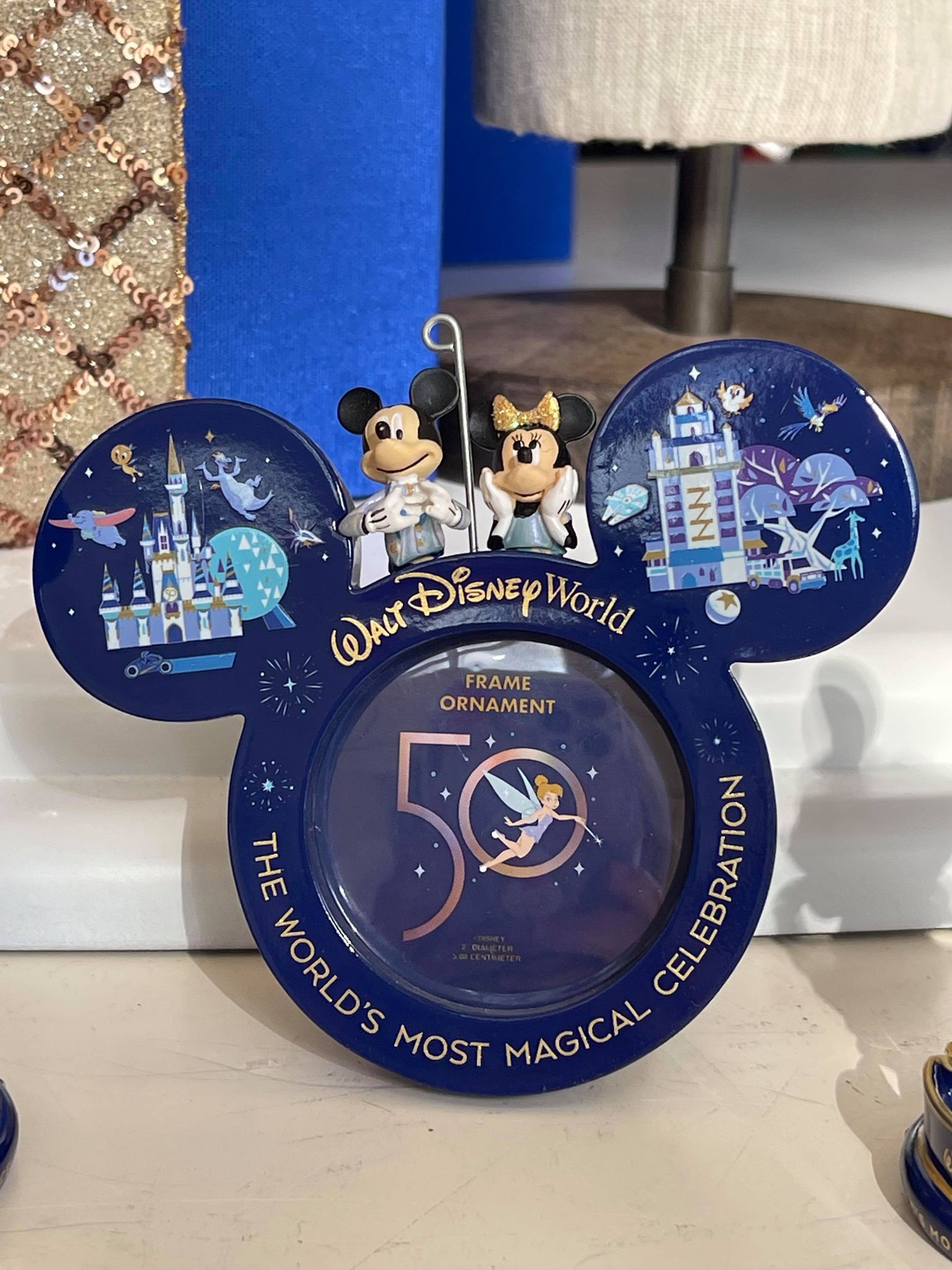 There’s also some familiar Disney friends that appear in the design like Dumbo and Figment! 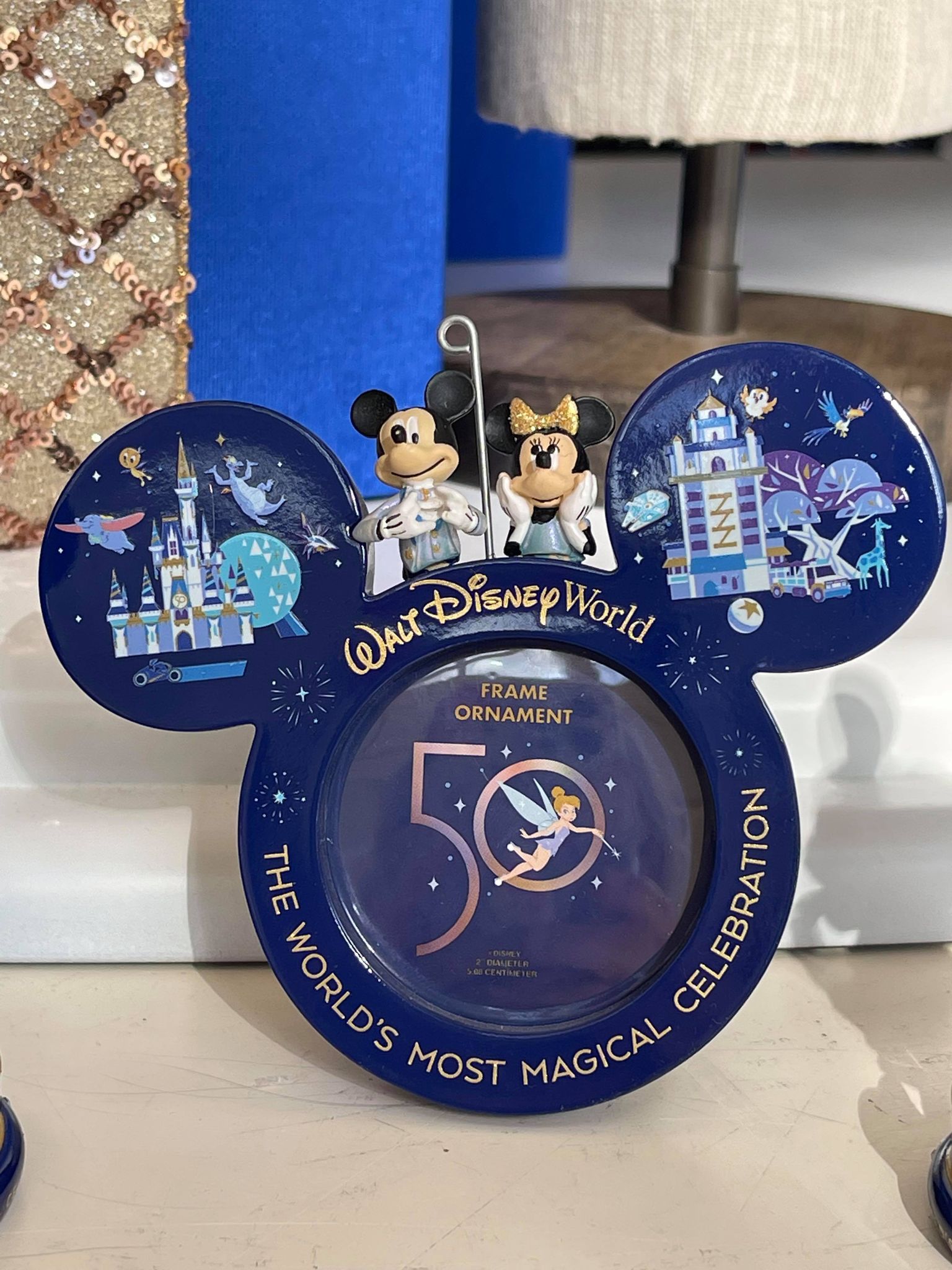 Around the frame is written, “The World’s Most Magical Celebration.” 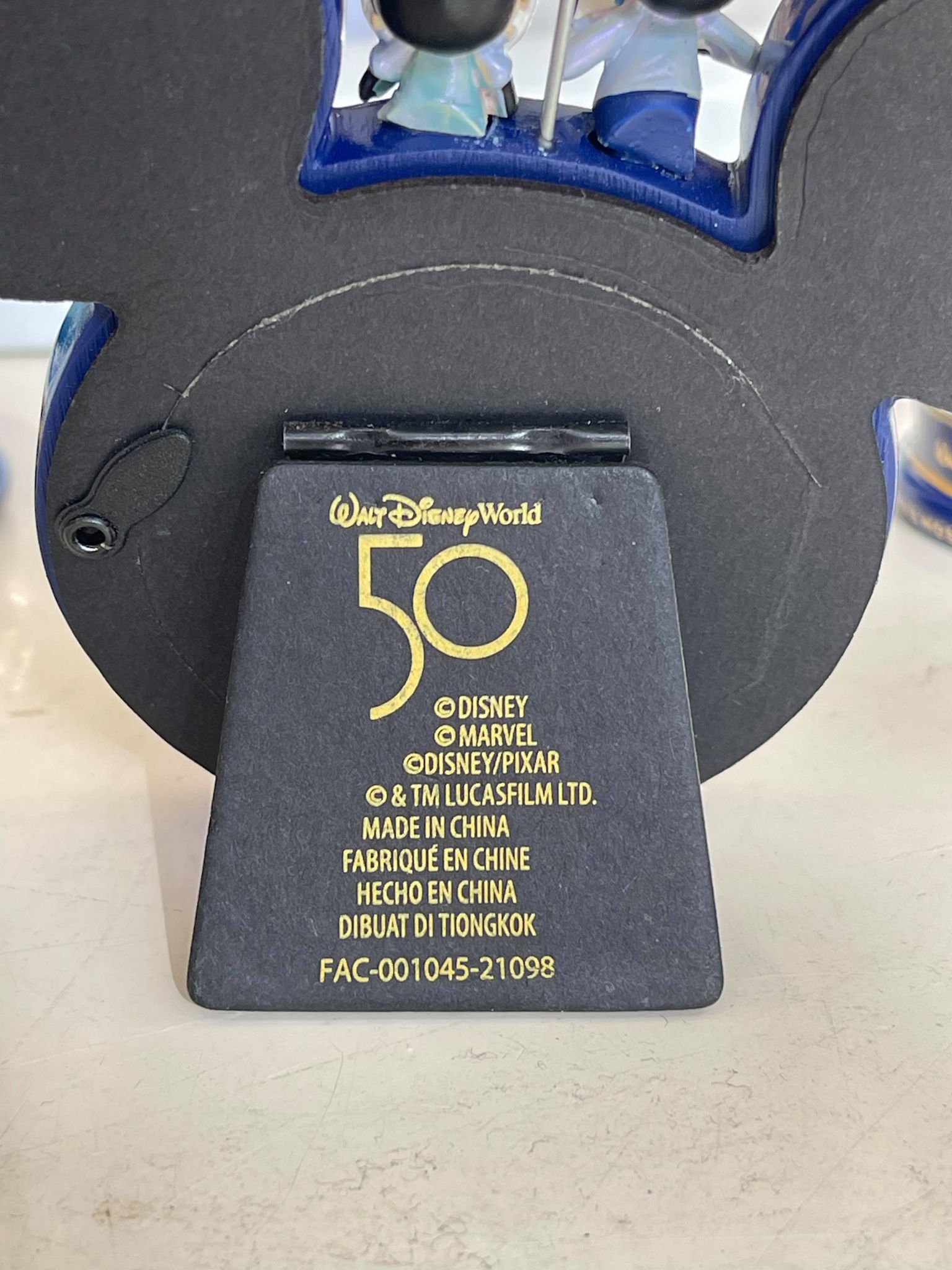 Best of all, this frame ornament also has a stand in the back. This means that when you’re not displaying it on  your tree, it can adorn your desk, bookcase etc. 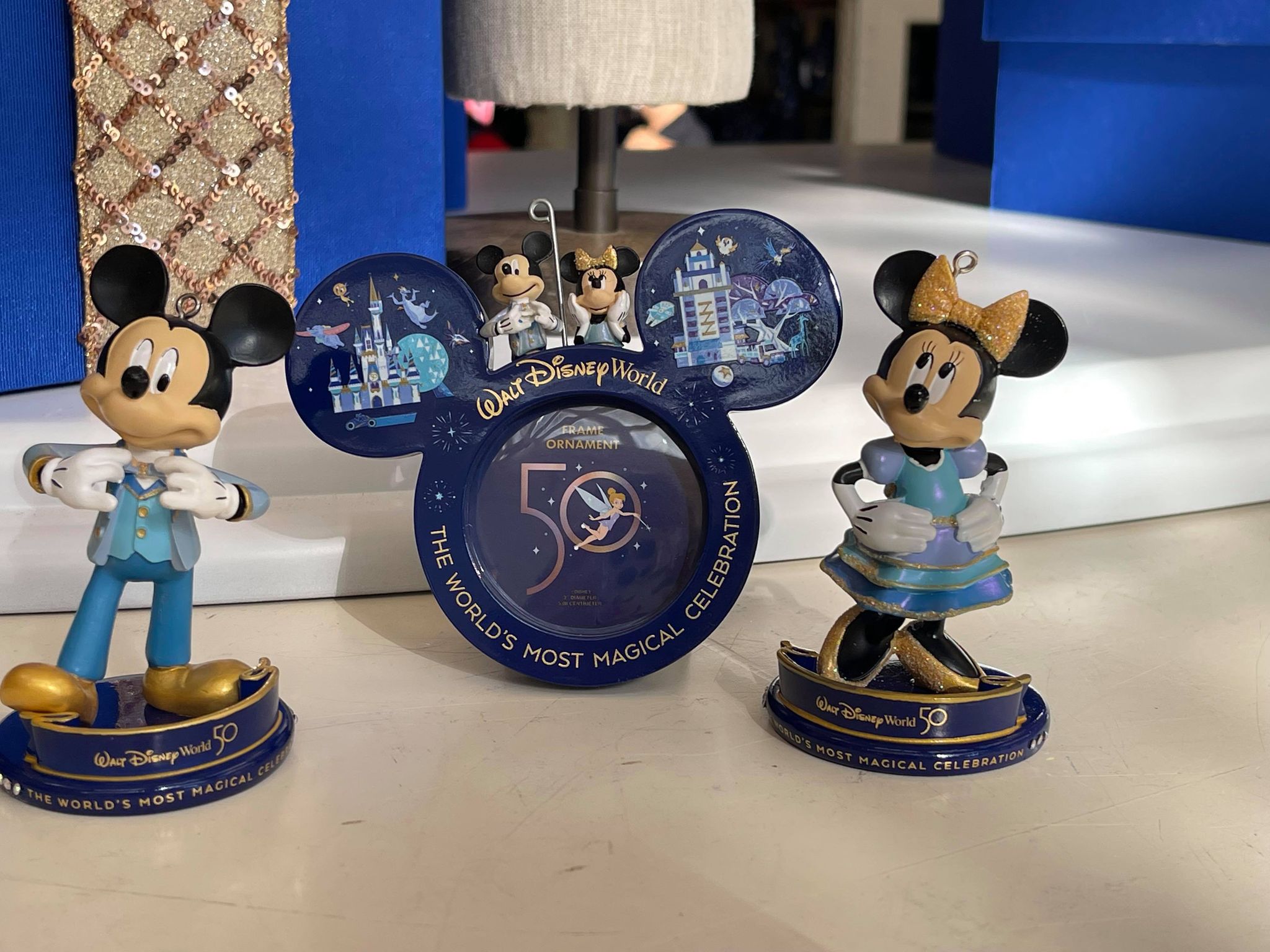 We absolutely love this entire set. 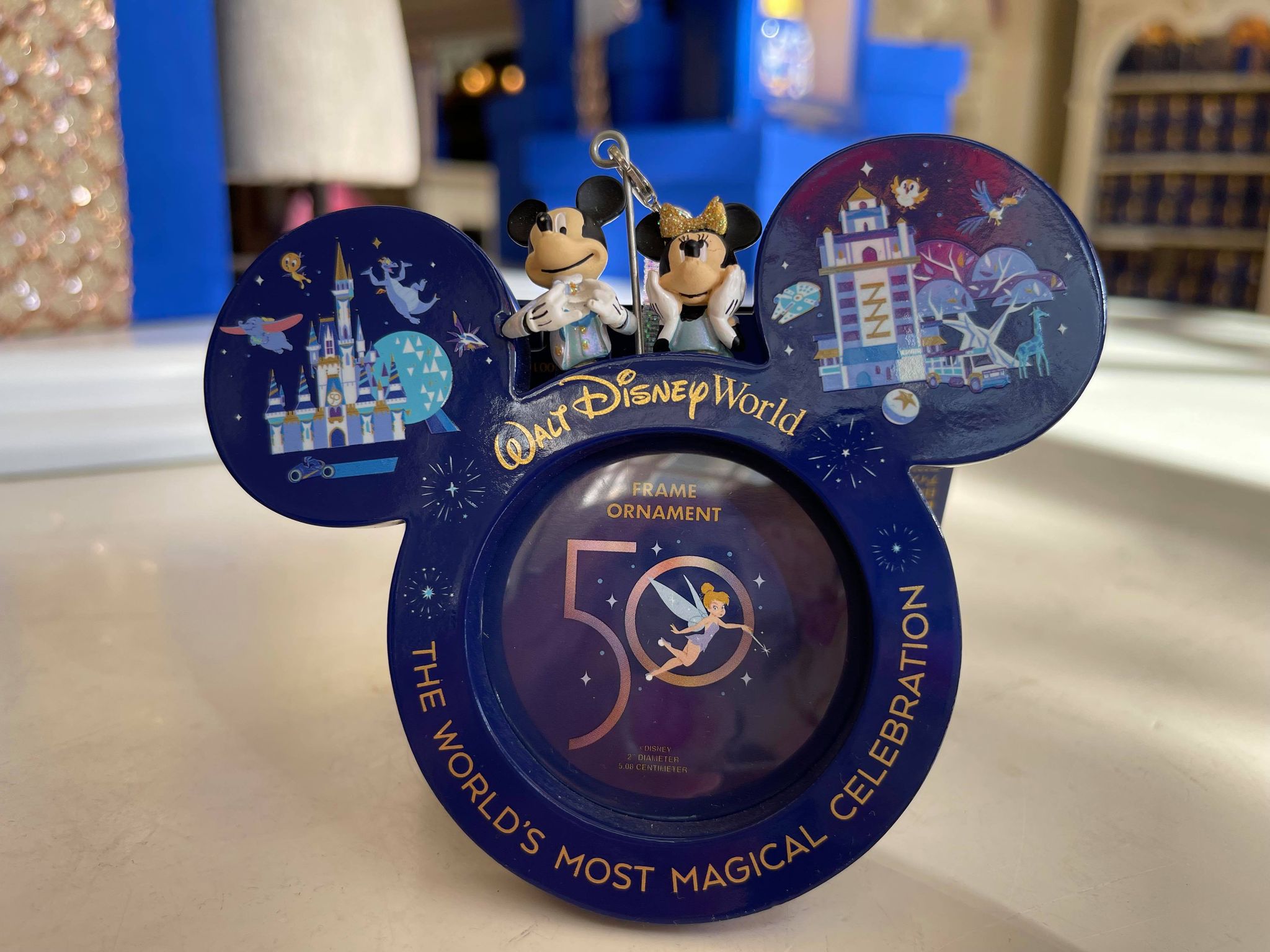 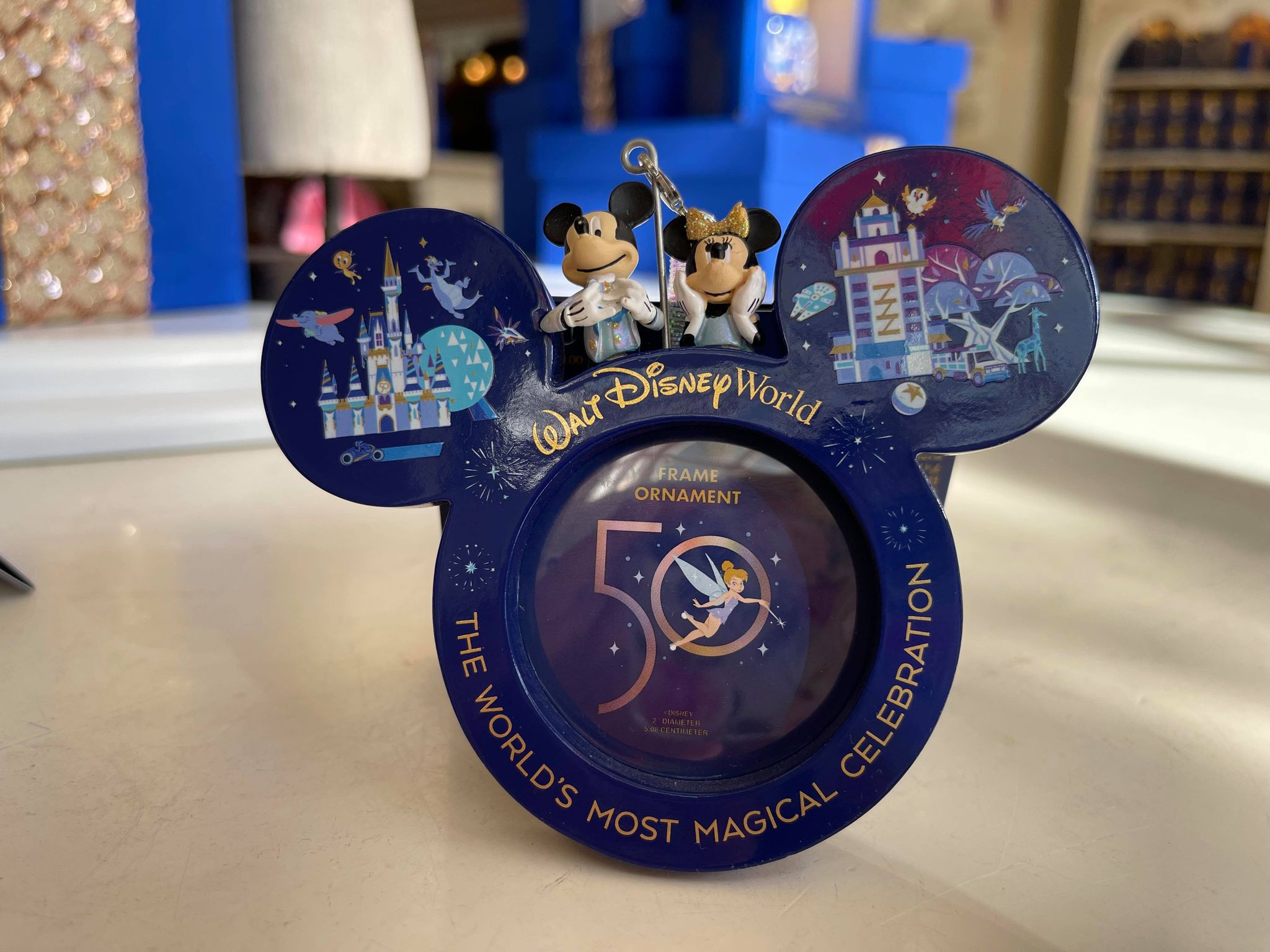 We’ve got one more ornament to share with you and we have to admit that this just might be one of our all-time favorites! 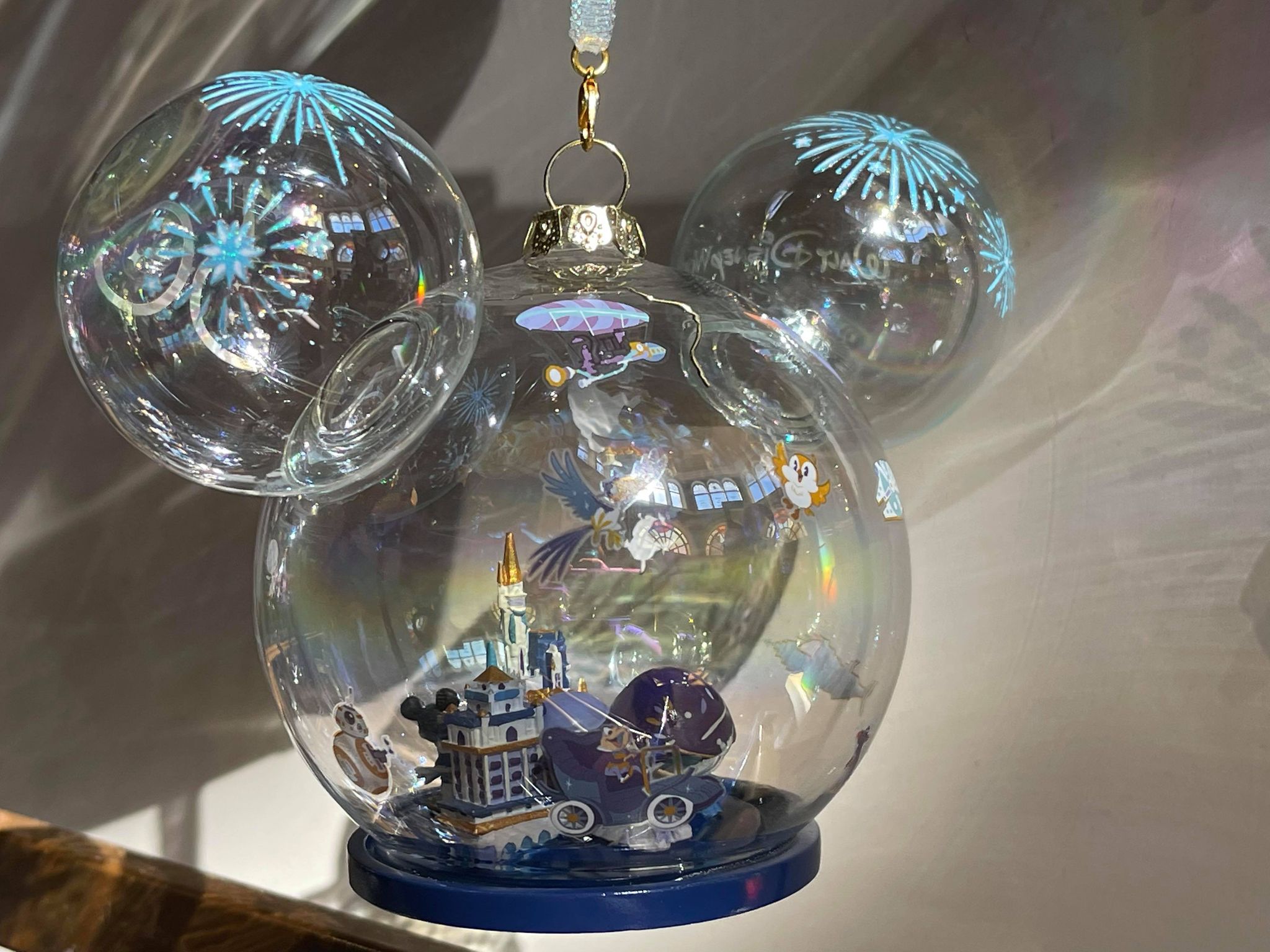 This 50th Anniversary globe ornament features some pretty delightful details both painted on the ornament itself and inside. 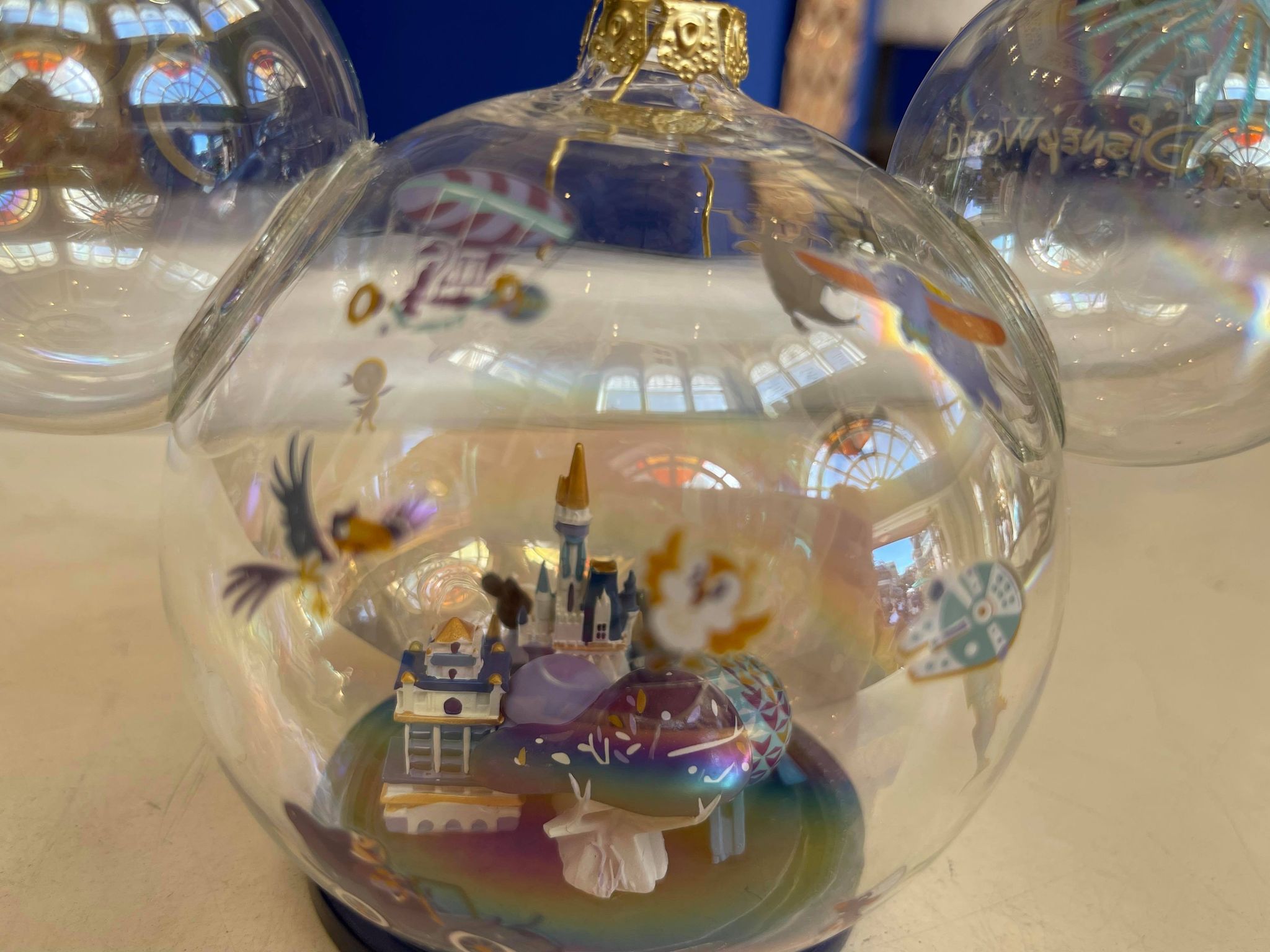 Inside the clear glass dome you can see the four Disney theme park landmarks. 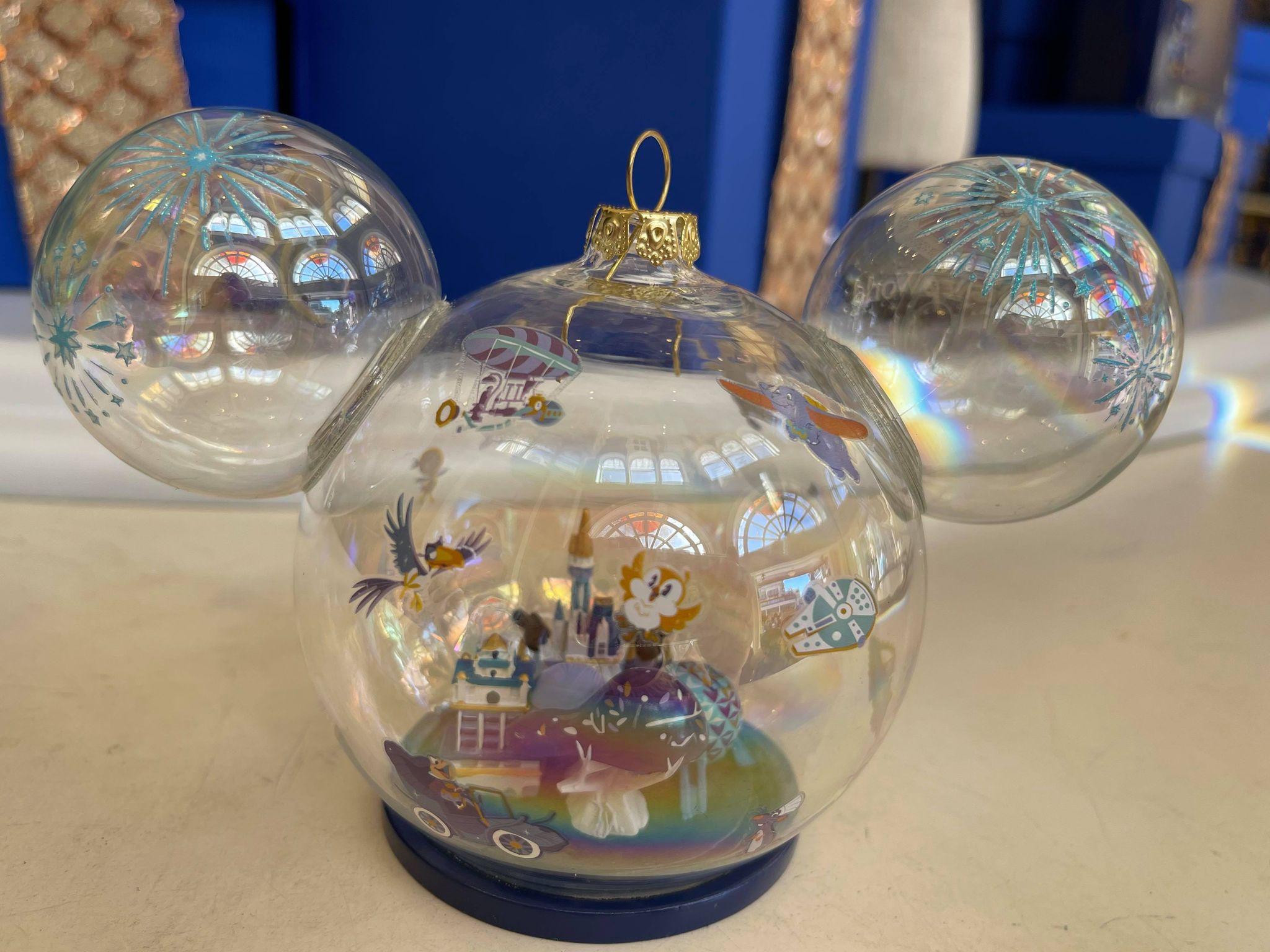 On the outside “Walt Disney World” and “50” adorn each of the ears. 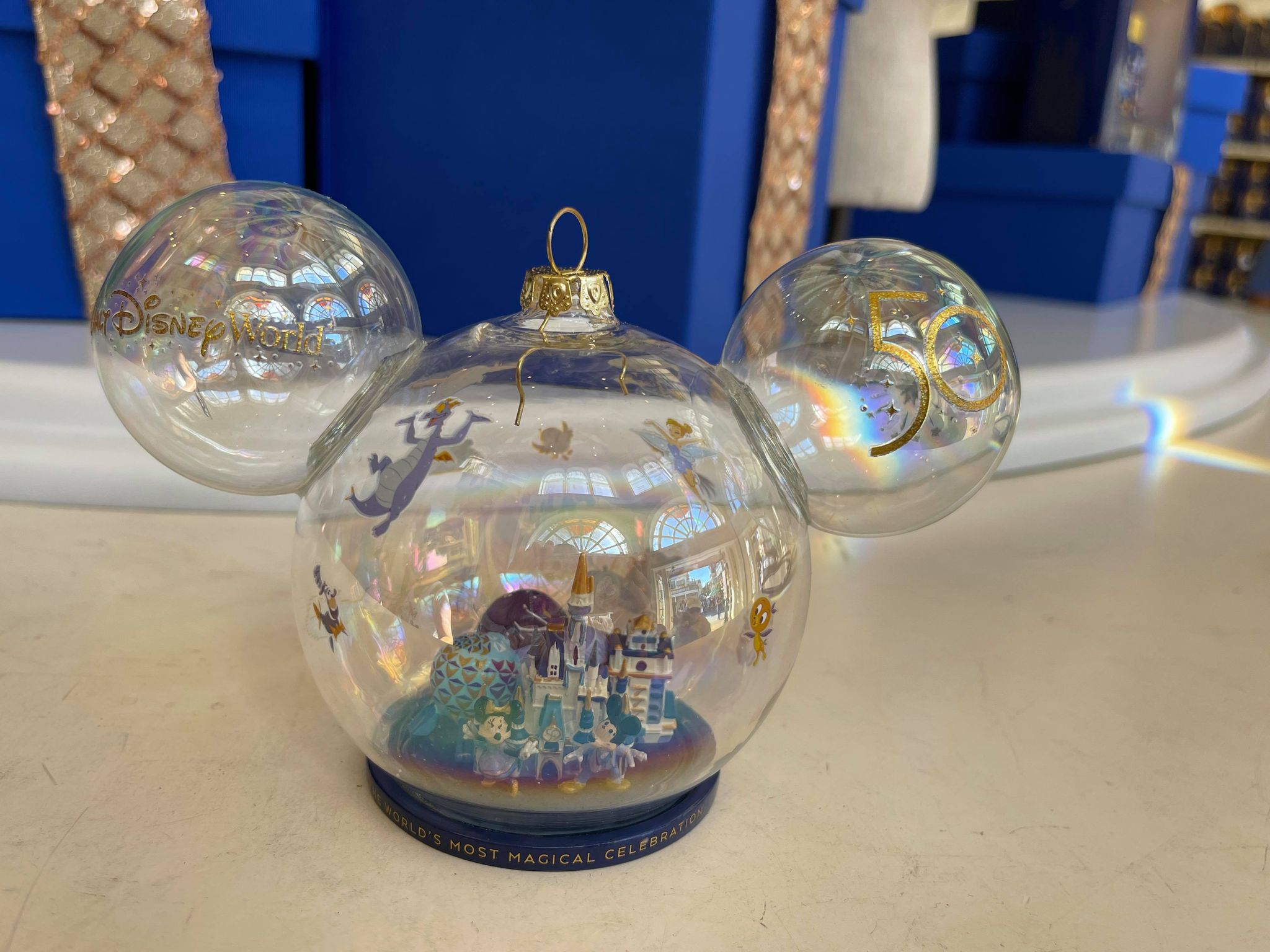 Painted onto the glass are a variety of favorite Disney characters including Figment, Orange Bird, Tinker Bell and more! 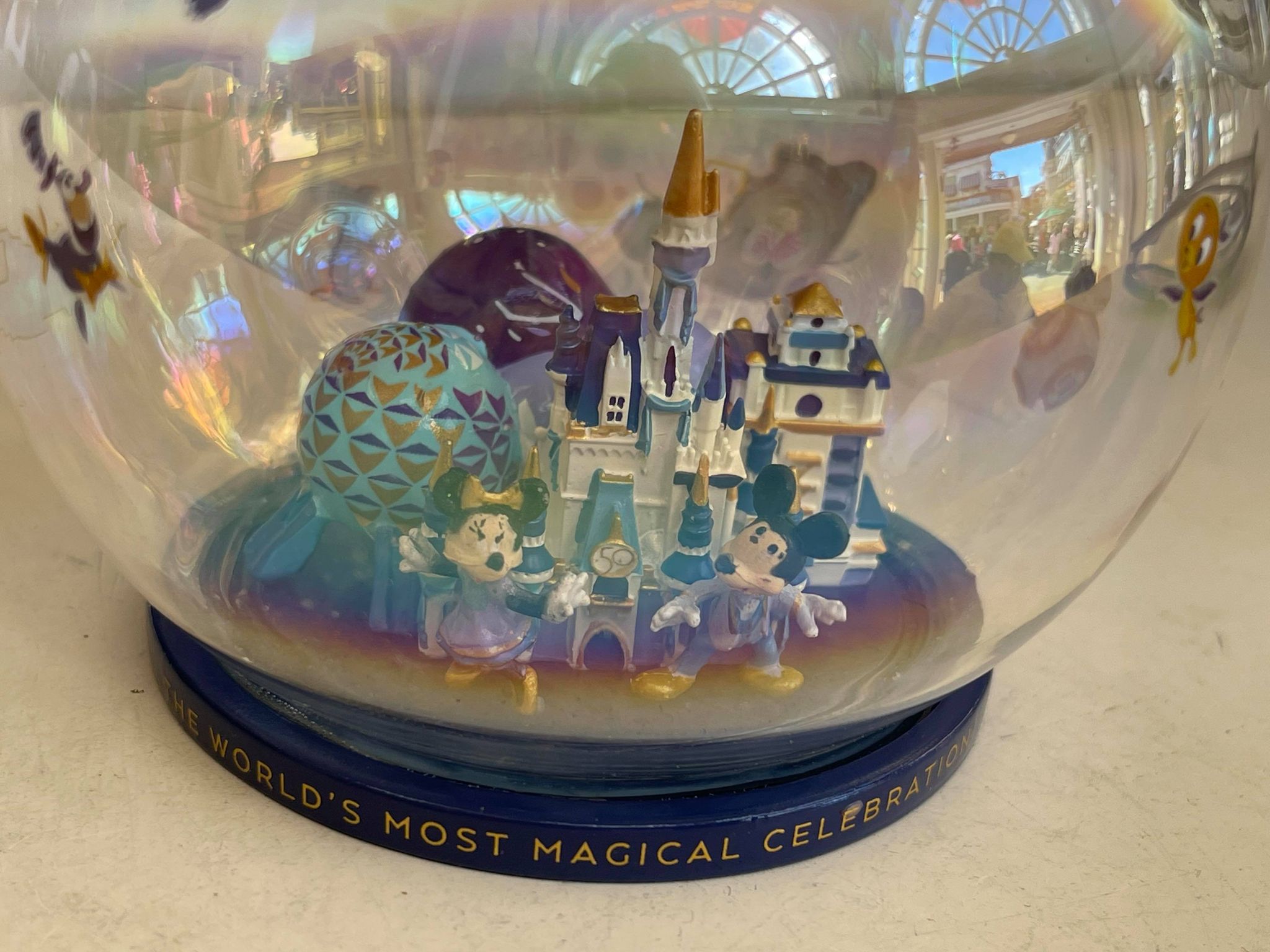 You can also see Mickey and Minnie standing in front of the castle. 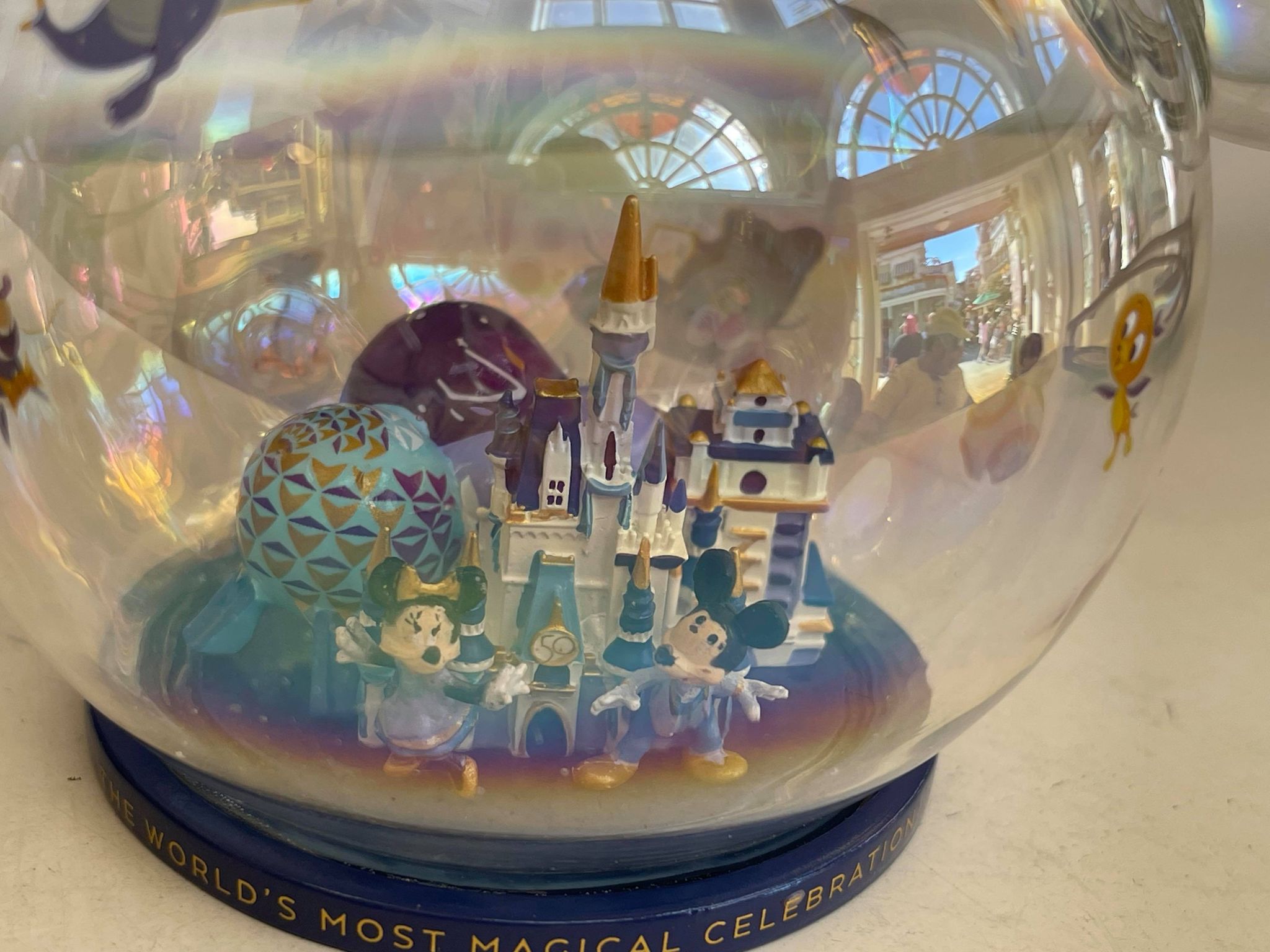 The ornament says “The World’s Most Magical Celebration” around the bottom. 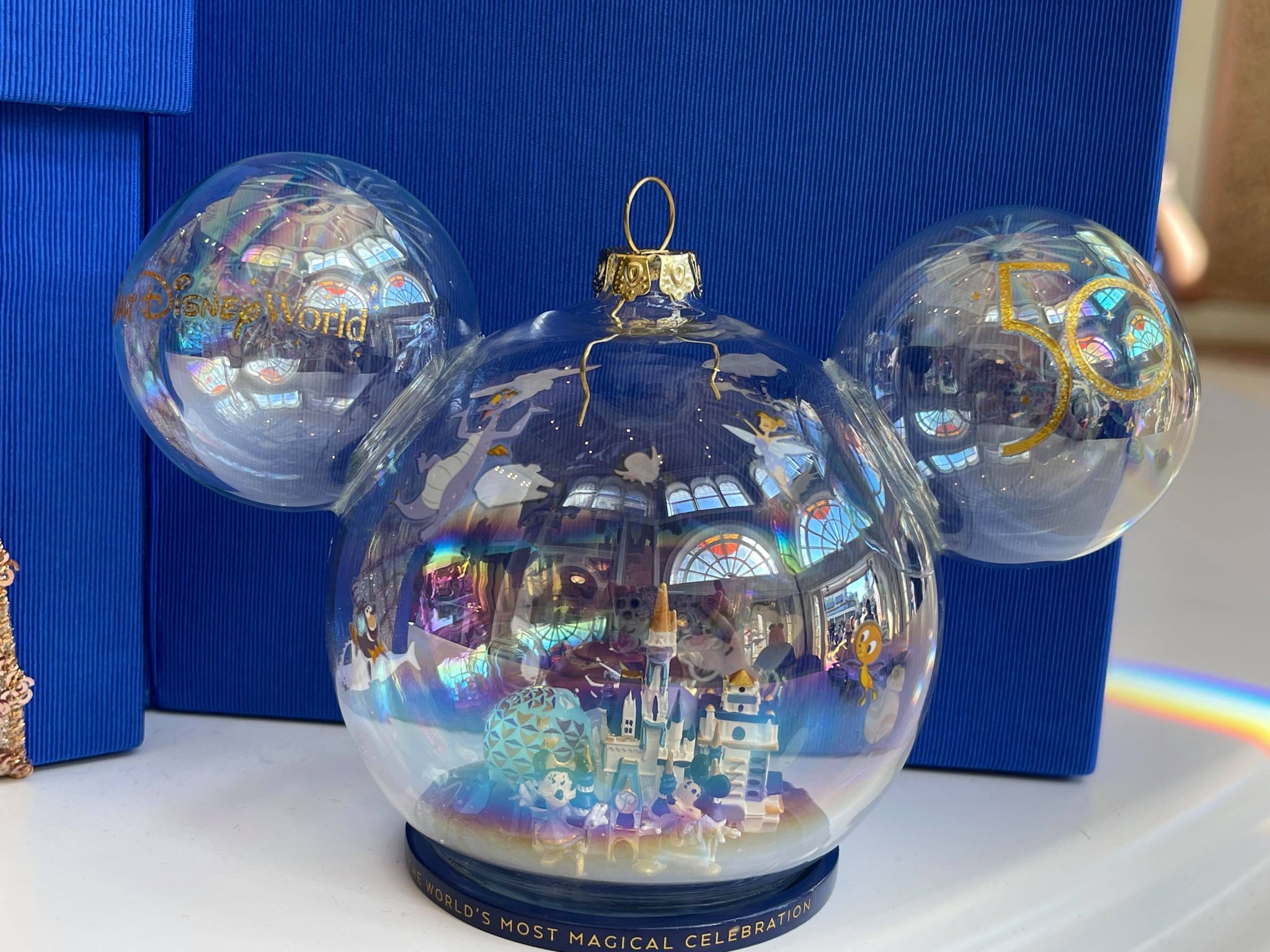 Again, it has a flat stand which means that you can display on a shelf or desktop when it’s not hanging from your tree. 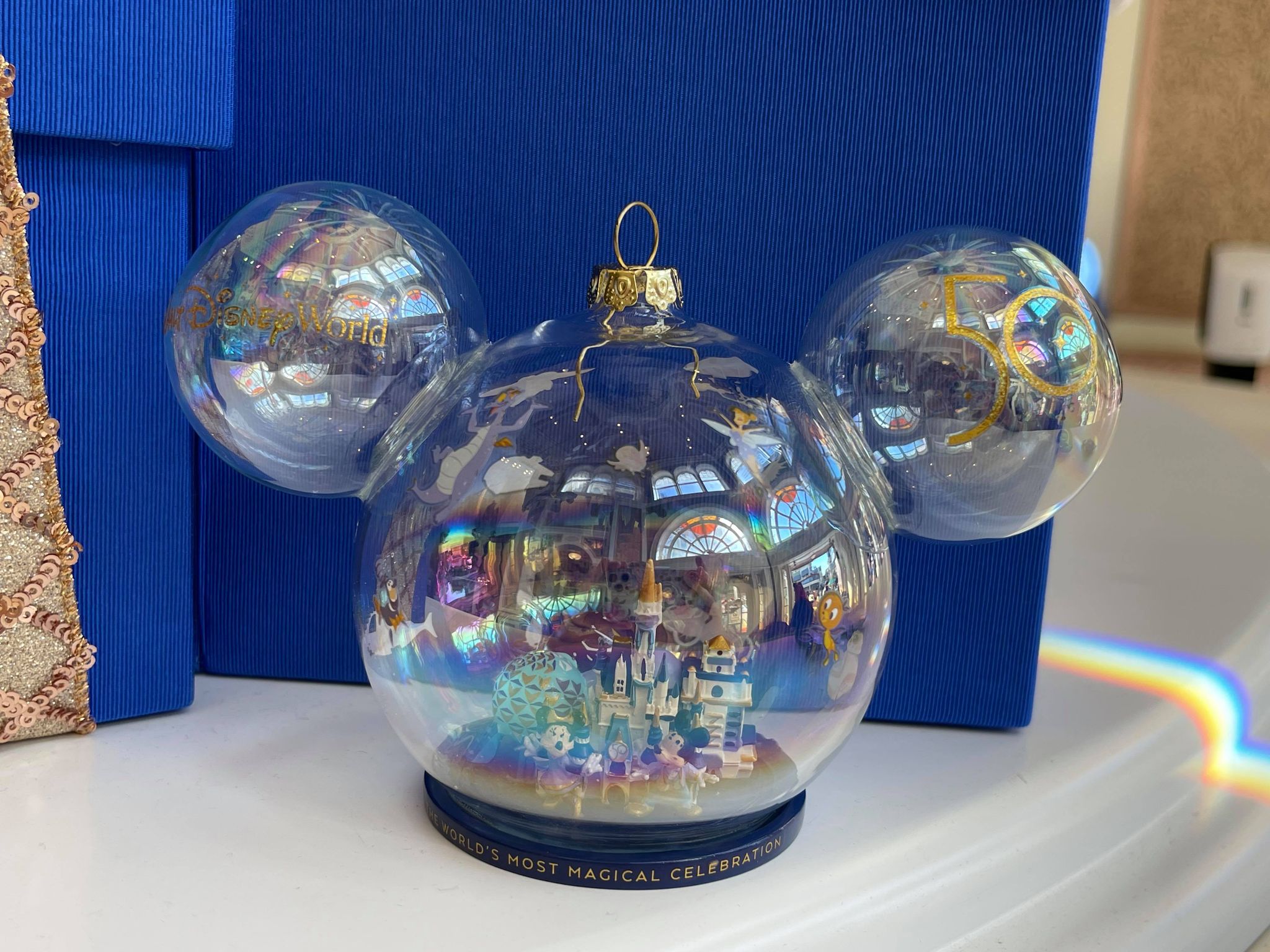 If picking up this item, look carefully at the painting on the inside.  We found one were we noticed that the markings on Mickey’s face were slightly off. 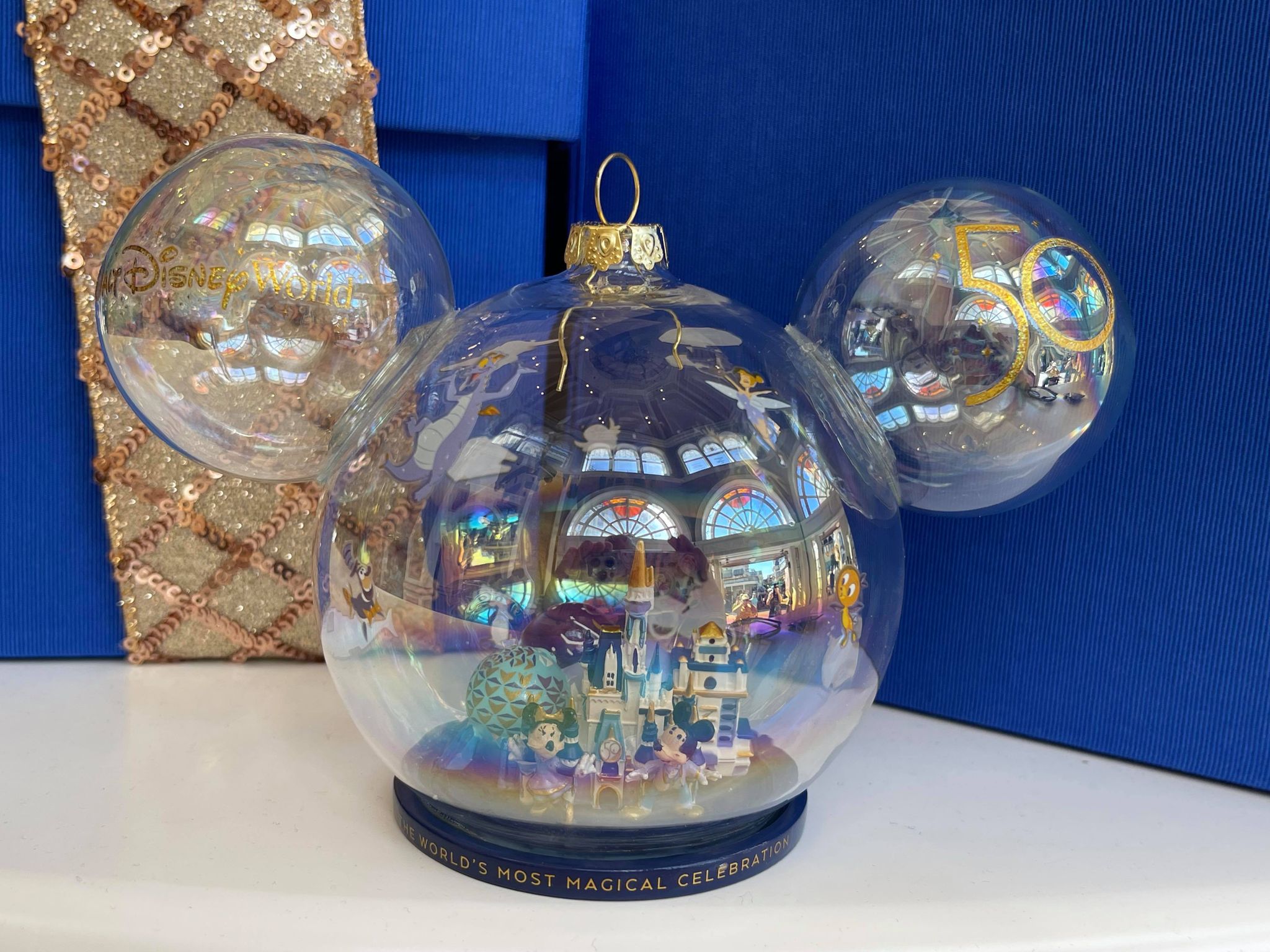