If you were following MickeyBloggers yesterday, you may have seen that it was a manic Monday for magical merchandise!

A huge new collection of items was released in celebration of the 50th Anniversary of Walt Disney World and huge crowds of guests formed to get their hands on some commemorative merch. From Minnie Ears to Crocs, there is so much to buy. But how to carry it home? 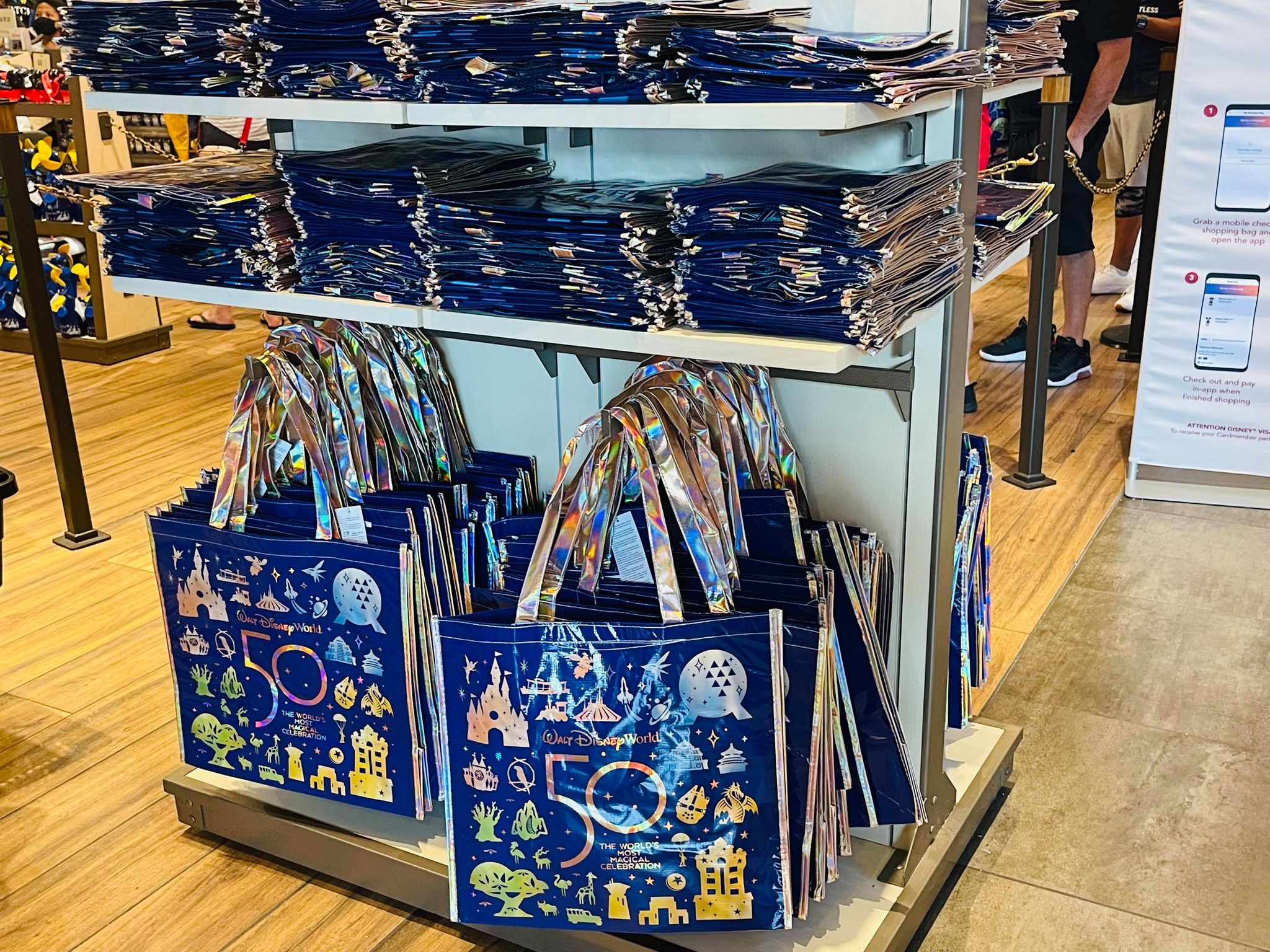 Thankfully, our shopping needs have been answered. 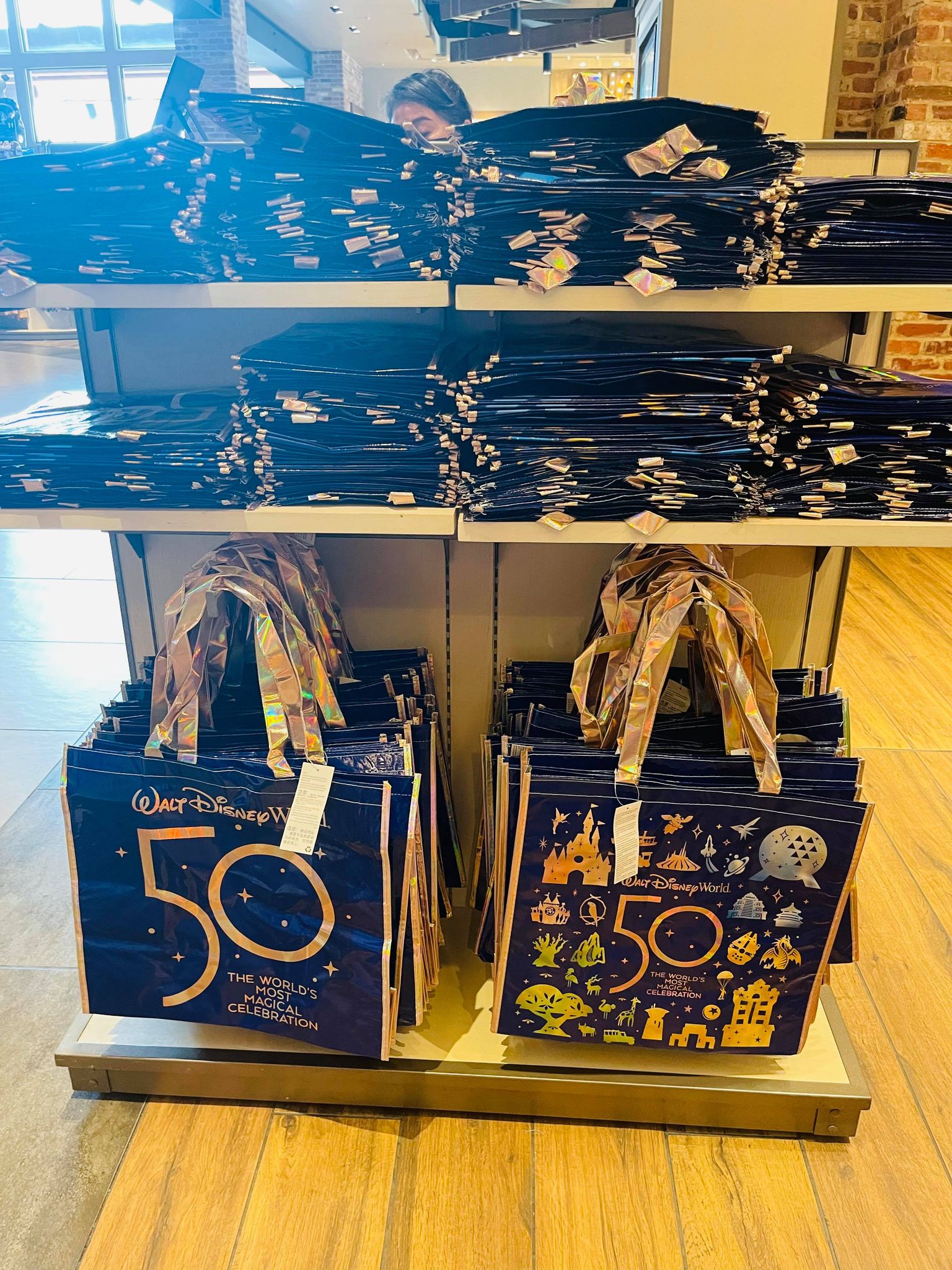 All released in honor of ‘The Most Magical Celebration’, it’s like a souvenir in which to carry your souvenirs! 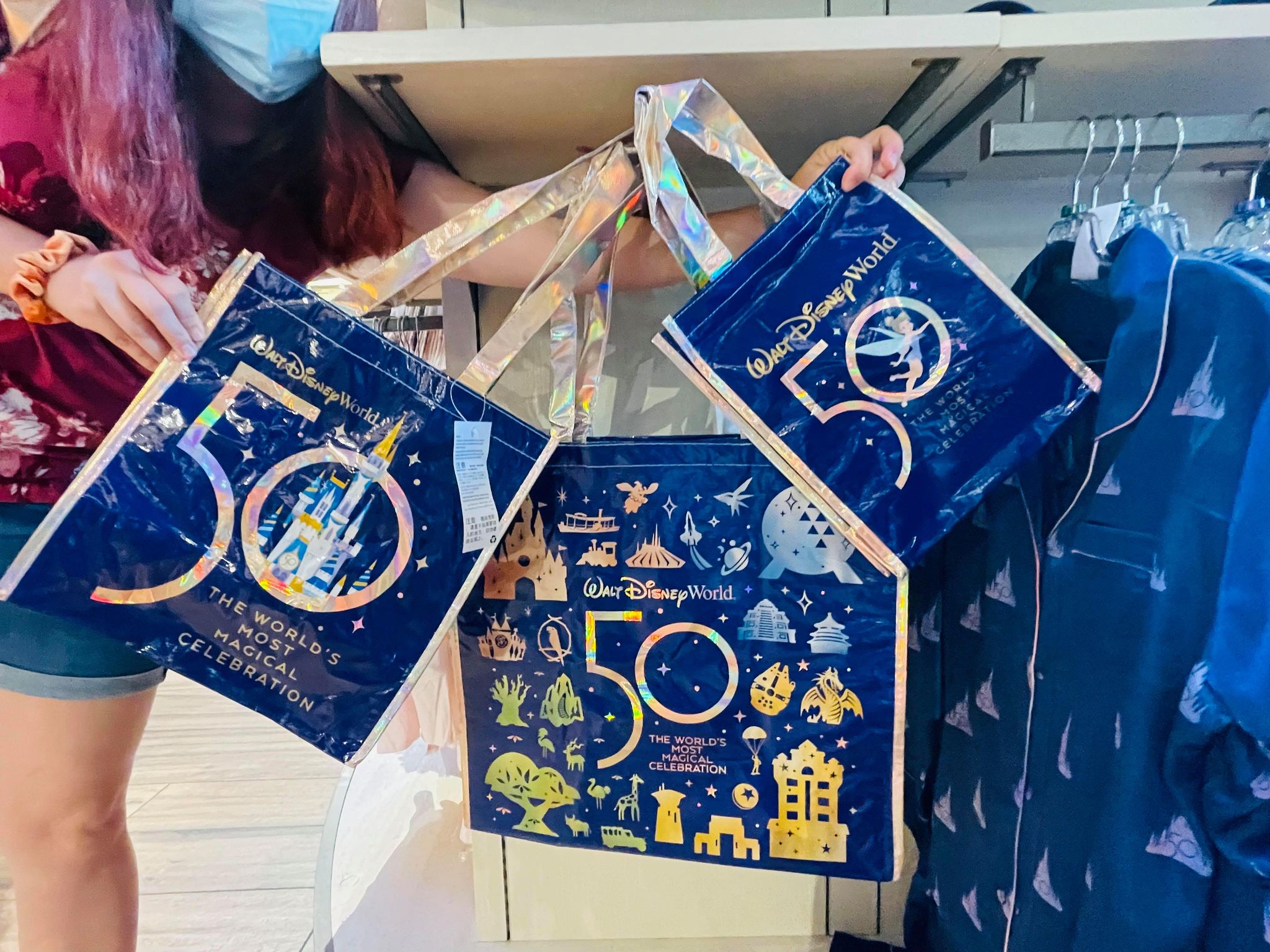 Like the other reusable bags at the Disney Parks, these anniversary bags come in three different sizes.

All three are a deep blue and feature that now-iconic 50th Anniversary logo, but each has individual touches of magic. You’ll want to collect them all! 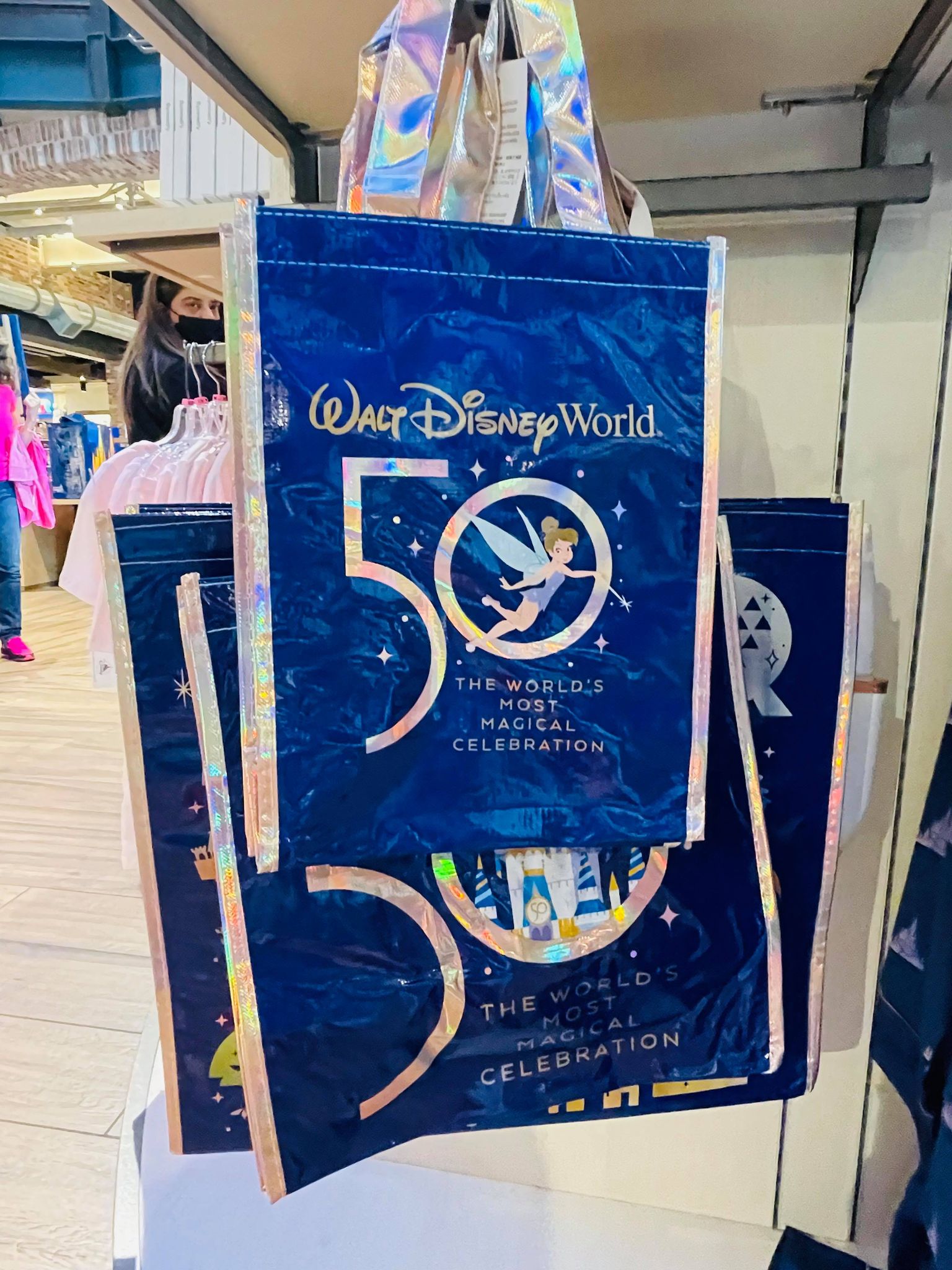 The handles and outer seams of these bags are stunning and sparkly, in the same EAR-idescent shade that has been sweeping the parks recently. 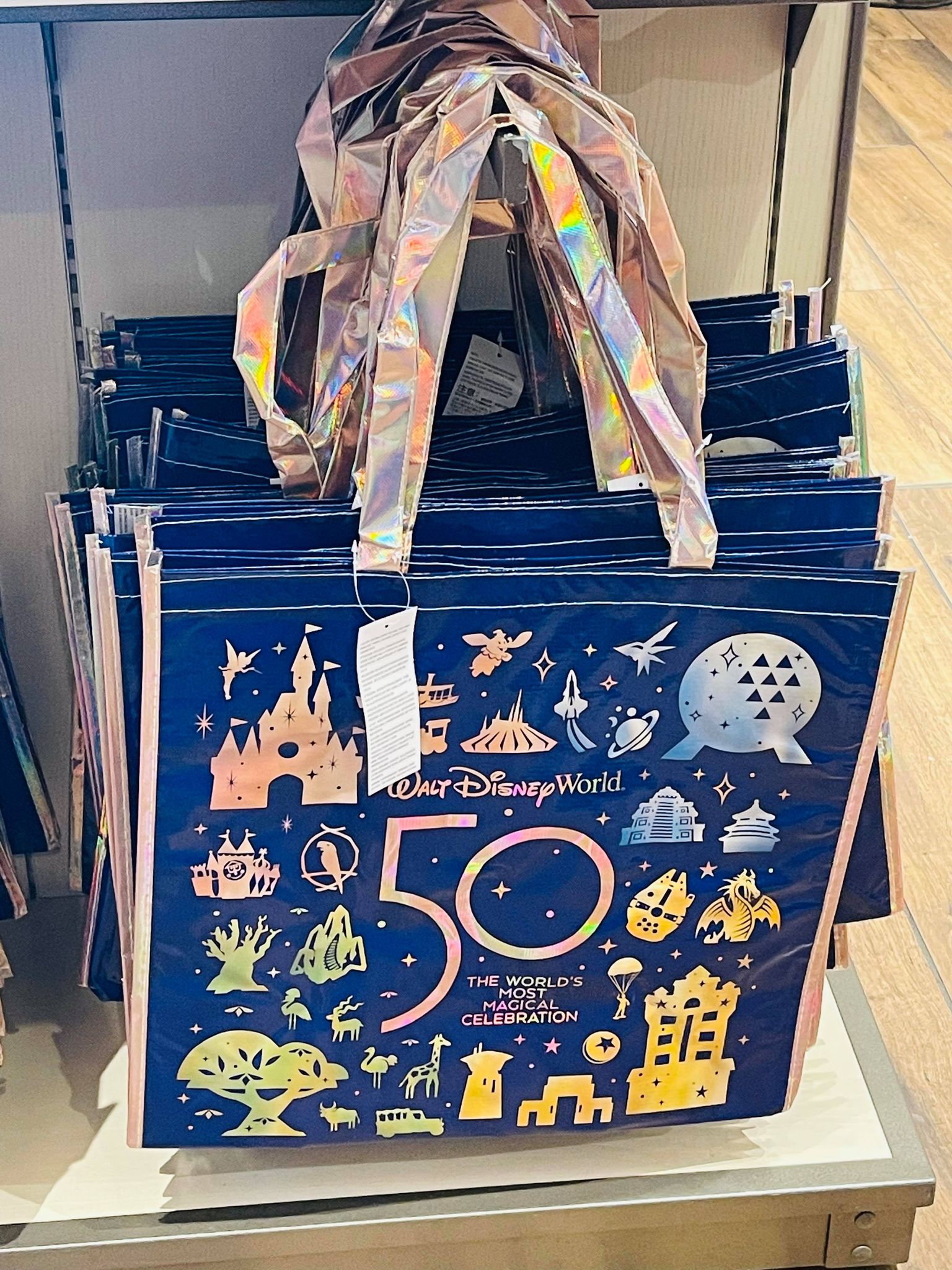 My personal favorite of the three bags is the big one. And not just because it would hold the most Minnie Ears! 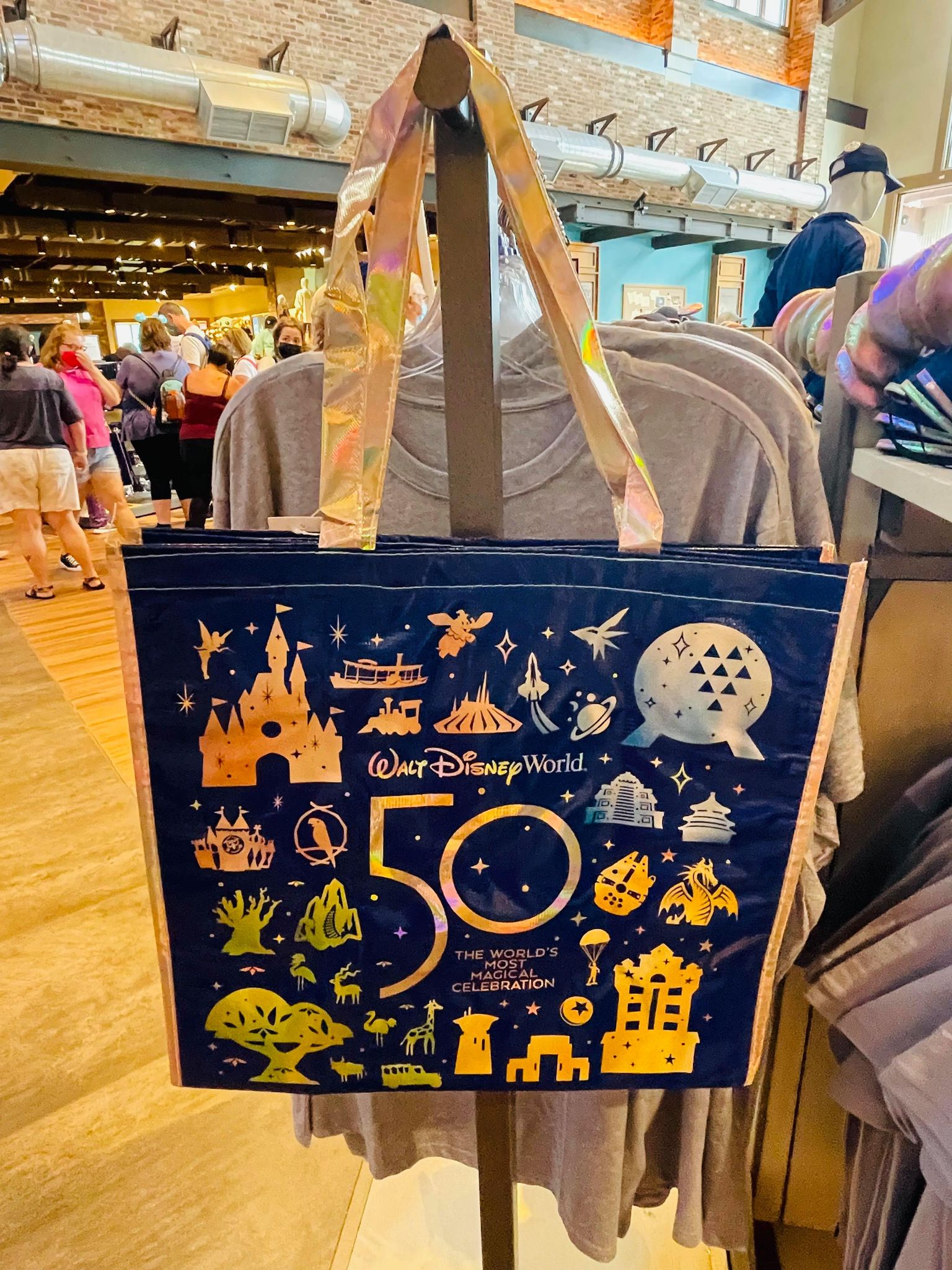 Around the 50 logo, the bag features a rainbow of icons from each of the four Walt Disney World theme parks.

From ‘it’s a small world’ to Kilimanjaro Safaris, Fantasmic to Spaceship Earth, they’re all featured on this snazzy shopper. 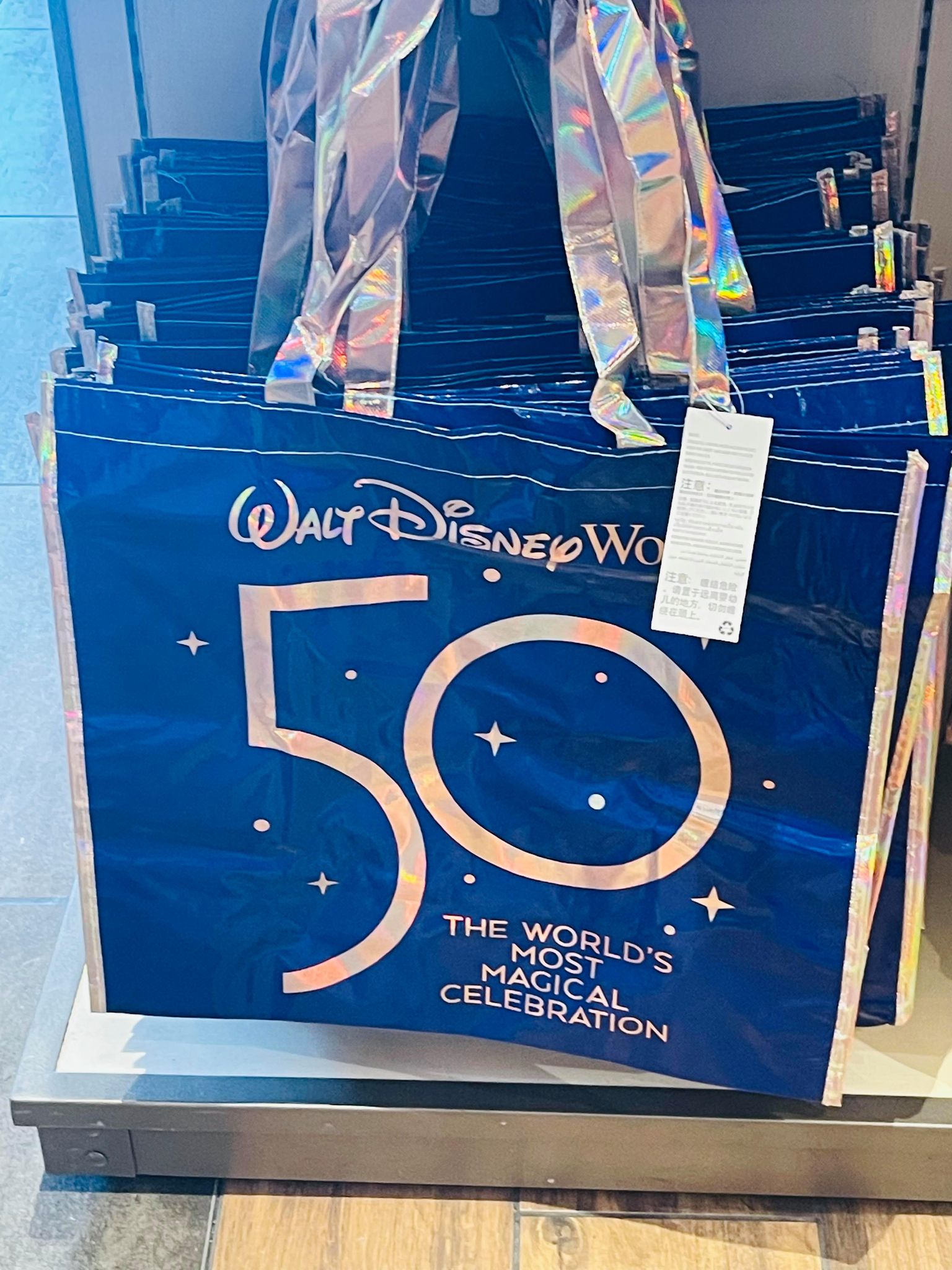 The other side of the bag is less busy, but just as magical with the anniversary logo and slogan framed by a scattering of stars. 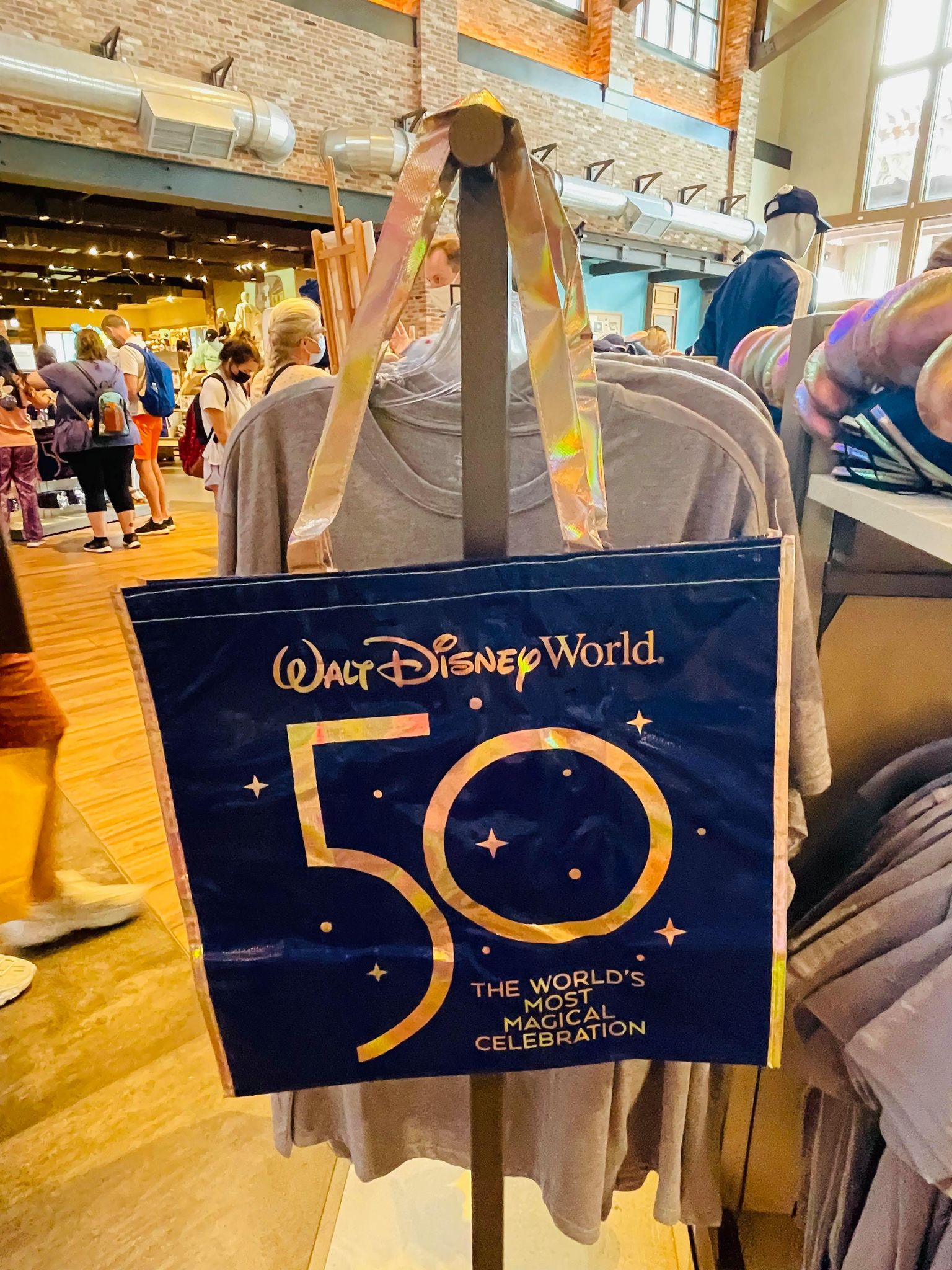 We love these reusable bags, being both environmentally-friendly and fun at the same time. 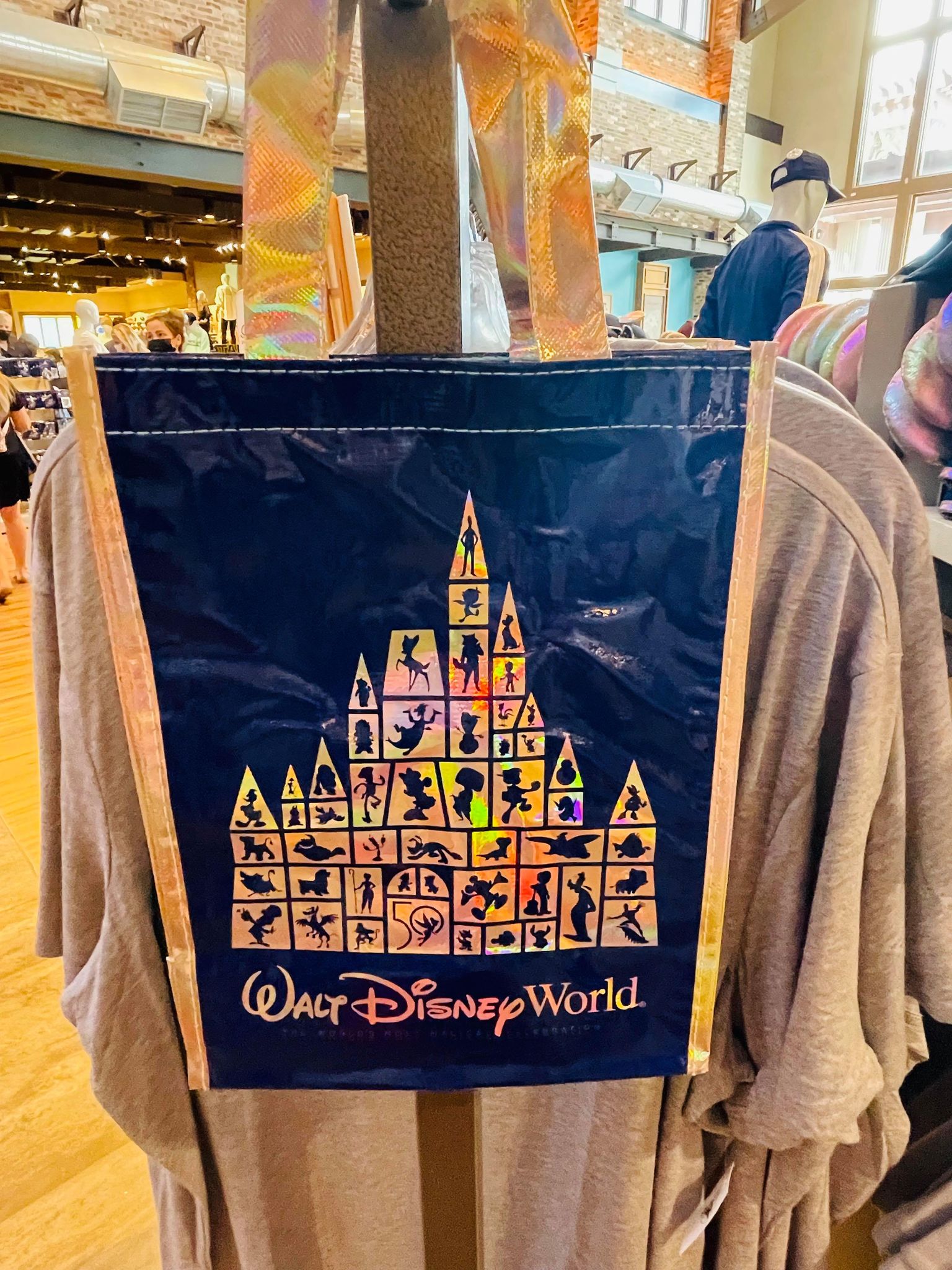 The next size of bags is also stunning, with an image of Cinderella Castle made up of some of the most iconic Disney characters.

It reminds us of the scene in Happily Ever After where characters are projected onto different portions of the castle! 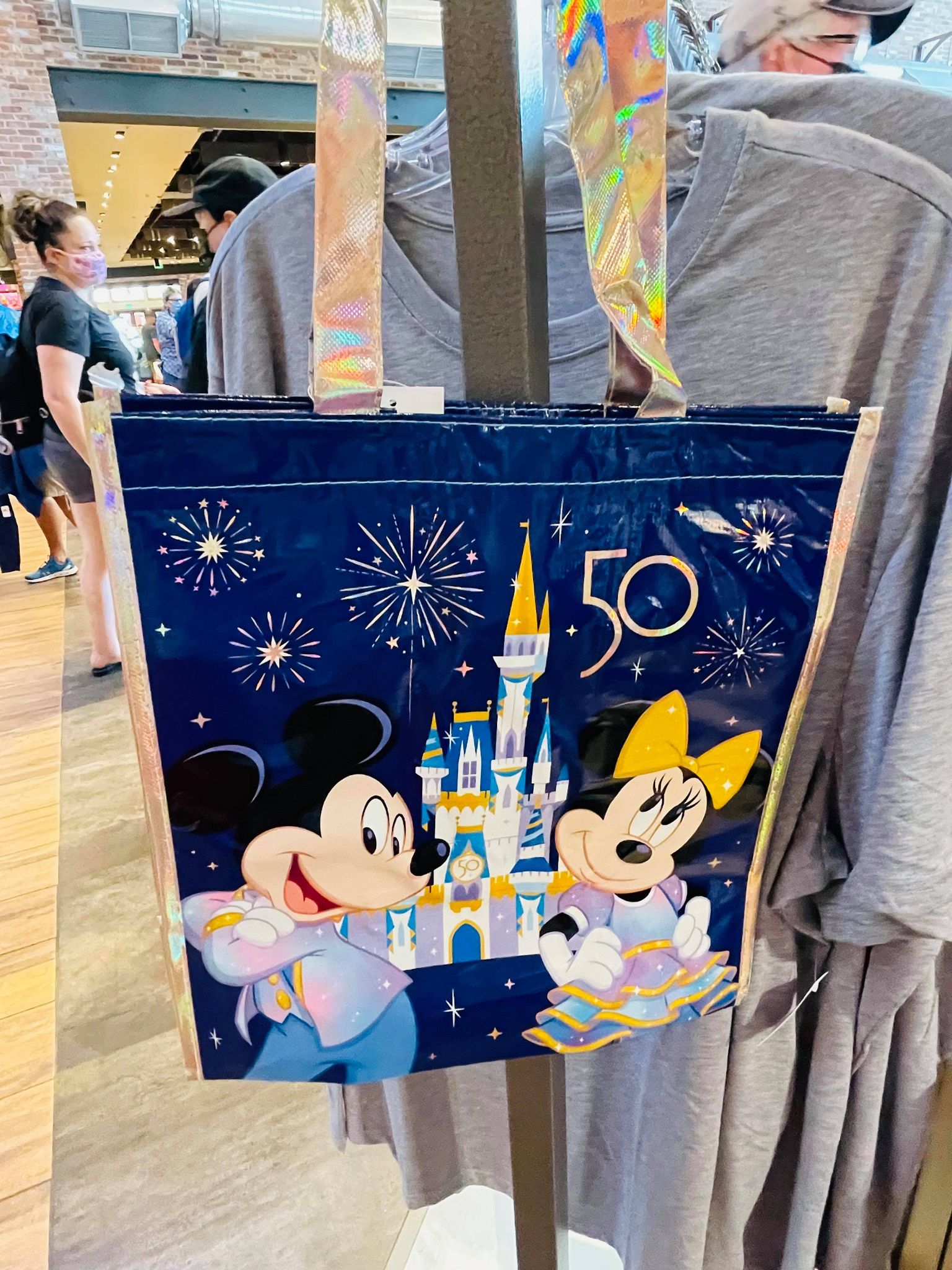 The last bag depicts Mickey and Minnie, wearing their EAR-idescent anniversary attire, posing in front of the dazzling castle.

There are fireworks going off above them, and the scene is truly magical! 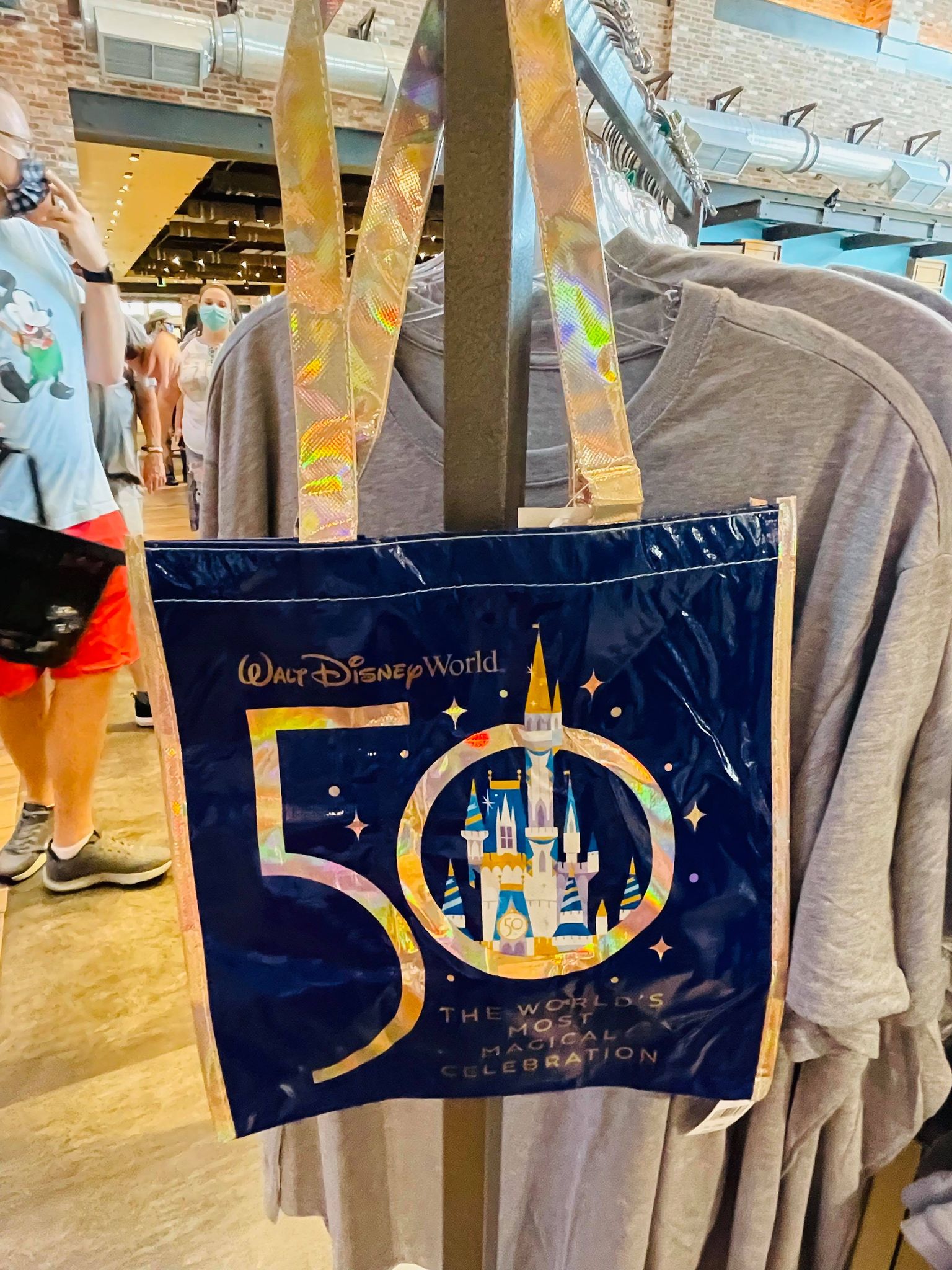 If you’re hoping to get your hands on one of these bags, be aware that they are very popular!

They sold out in record time yesterday over at the Emporium in Magic Kingdom, but we were pleased to spot them in World of Disney at Disney Springs this morning. 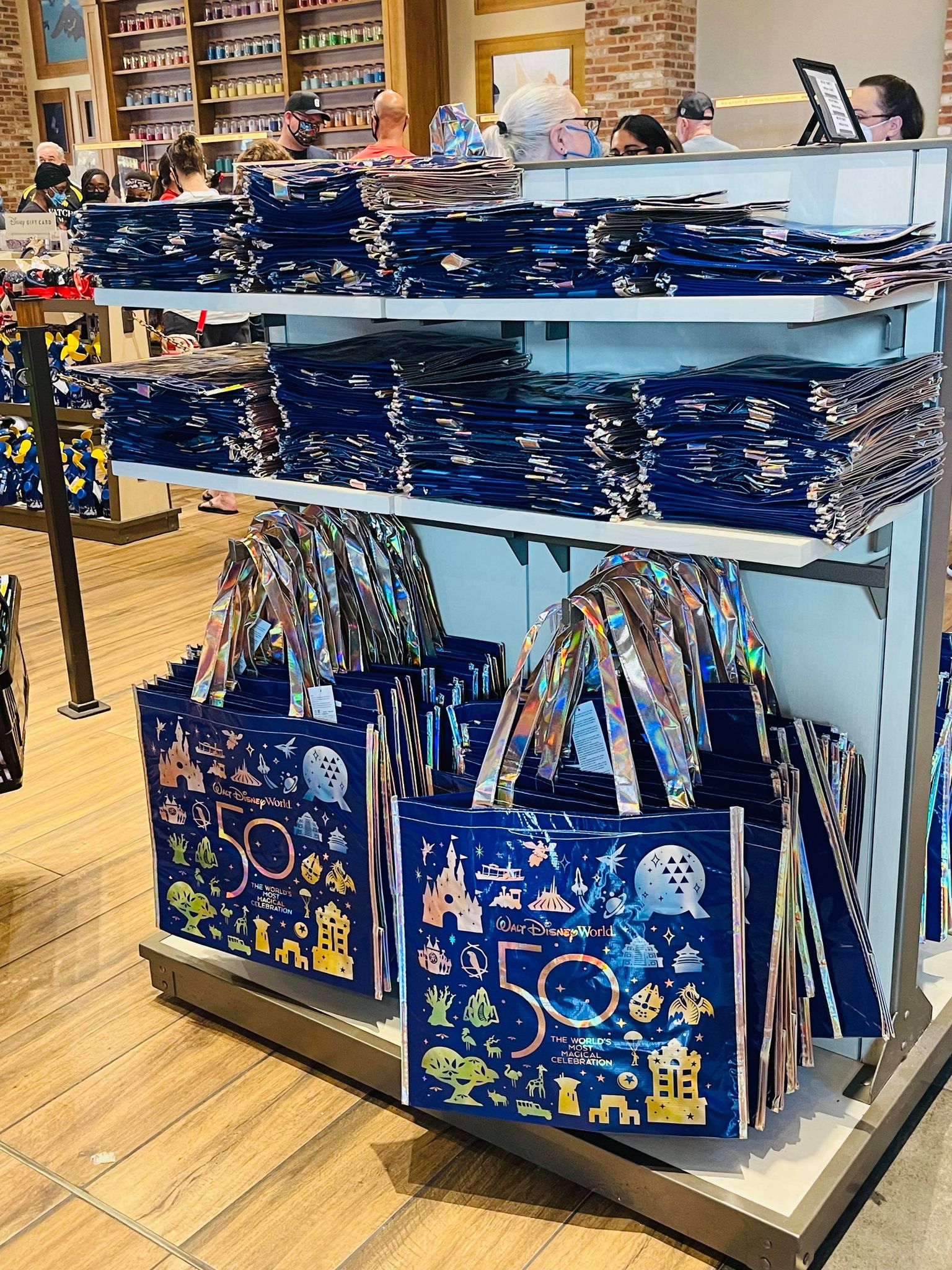