Let’s Celebrate National Popcorn Day With a Look Back at Our Favorite Souvenir Popcorn Containers!

Of all of the incredible souvenirs to come out of Disney theme parks each and every season, nothing really captures the hearts or the imaginations quite like Disney’s souvenir popcorn containers.  Several times a year fans clamor to pick up the latest popcorn bucket releases.  As a matter of fact, popcorn containers have become such a sought after souvenir that its not uncommon to see them sold on eBay at a HUGE mark-up.

So we here at MickeyBlog, thought what better way to celebrate National Popcorn Day then by sharing with you some of our favorite popcorn containers over the years!

This retro Steamboat Minnie souvenir popcorn container made it’s debut last February at Disneyland where it was a Passholder exclusive!  Drawing its inspiration from the 1928 cartoon short Steamboat Willie if features fantastic monochrome details, adorable flowers and even a shoulder strap fashioned after a vintage film strip! 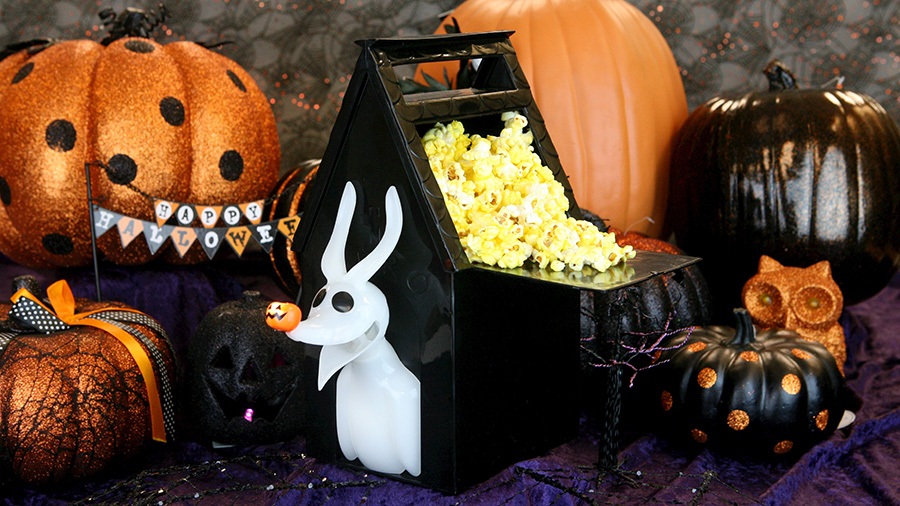 Here’s another blast from Halloween past! The Zero Premium Popcorn bucket was released at Disneyland and was inspired by Haunted Mansion Holiday!  It featured Zero from Tim Burton’s Nightmare Before Christmas complete with a doghouse that revealed a hidden popcorn stash! This is from back in 2015 but you can occasionally find them on eBay to this day. 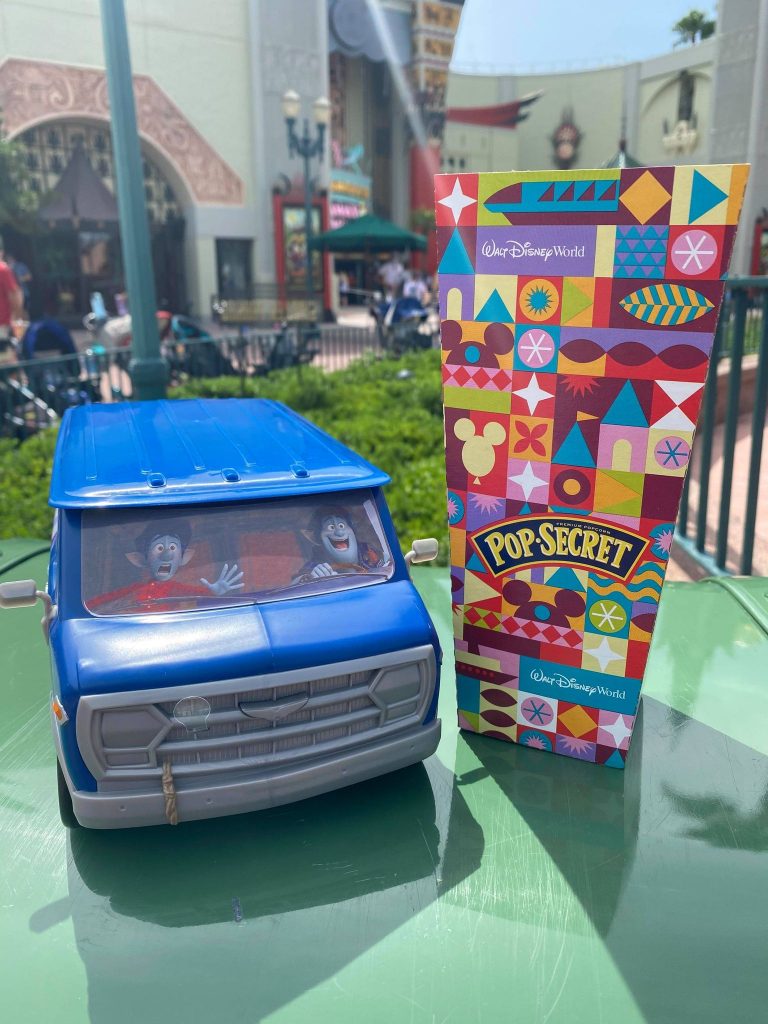 This one came out  at Hollywood Studios in celebration of Pixar’s film Onward which followed a pair of magical brothers on a quest to bring their father back for one last good-bye.  One of our favorite buckets ever, this one was fashioned after the brothers’ Nobel steed/van Guinevere right down to the airbrushed unicorn artwork on the side.  However our favorite detail has to be the fact that you can see Ian and Barley through the windshield. 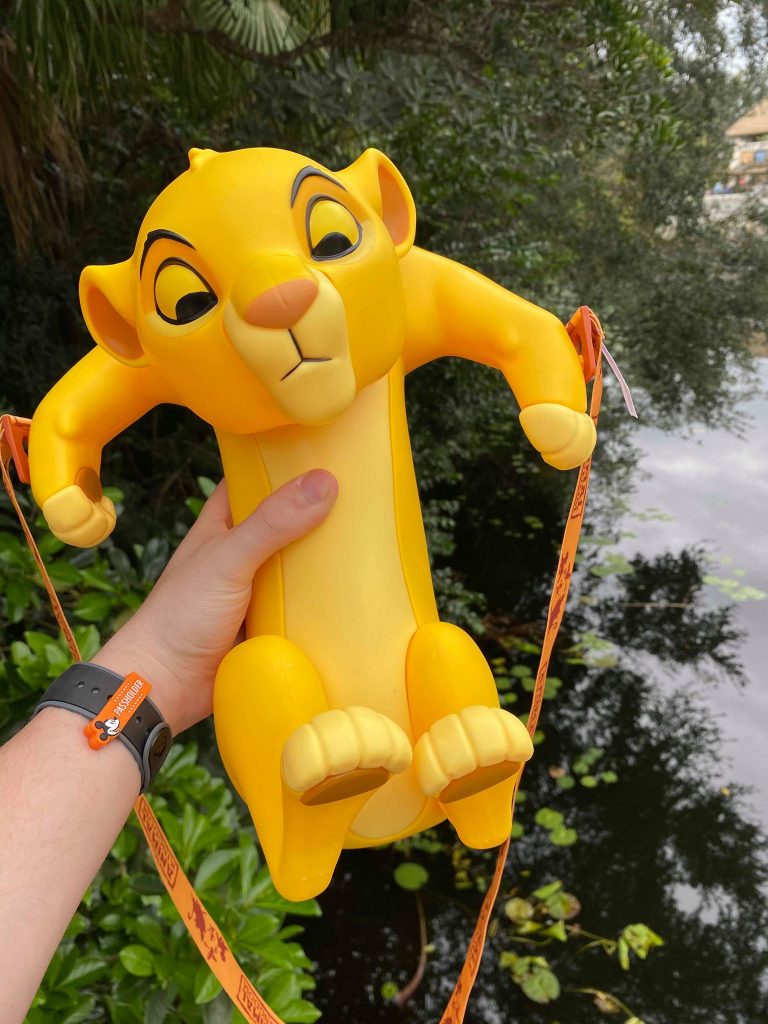 This popcorn container roared into our hearts last January at Animal Kingdom theme park.  It featured Simba from the original animated version of The Lion King.  It definitely had us signing  “Hakuna Matata!” As you can see from the image above, Baby Simba was captured in an adorable pose reminiscent to when Rafiki proudly holds the heir to the throne high in the air at the start of the animated classic. It came with a shoulder strap featuring cute Lion King-inspired artwork featuring Timon and Pumbaa. 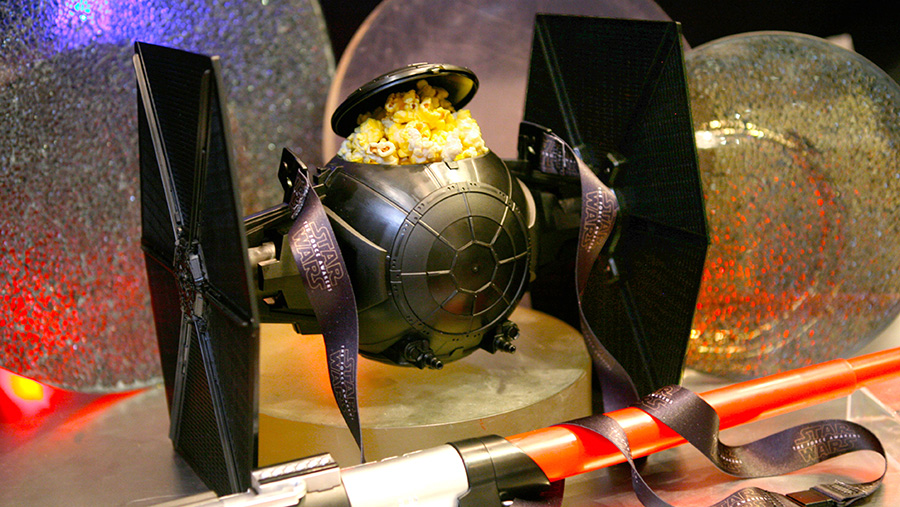 This is another container that harkens back to 2015 during Season of the Force at Walt Disney World! This TIE Fighter was a must-have for Star Wars fans of all ages!  It was available to guests at Tomorrowland Terrace. 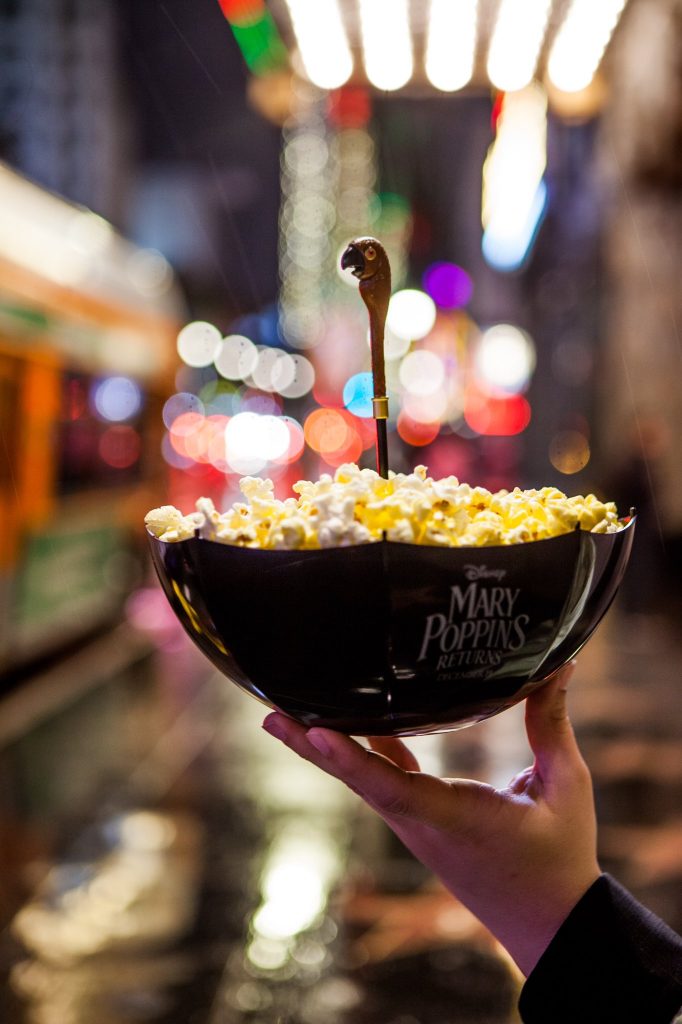 Who remembers this beauty!  For this delightful recreation of Mary’s famous umbrella complete with the delightful bird on the handle you had to pop by the El Capitan Theatre in Hollywood for a 2018 screen of Mary Poppins Returns which in our eyes was a win-win! 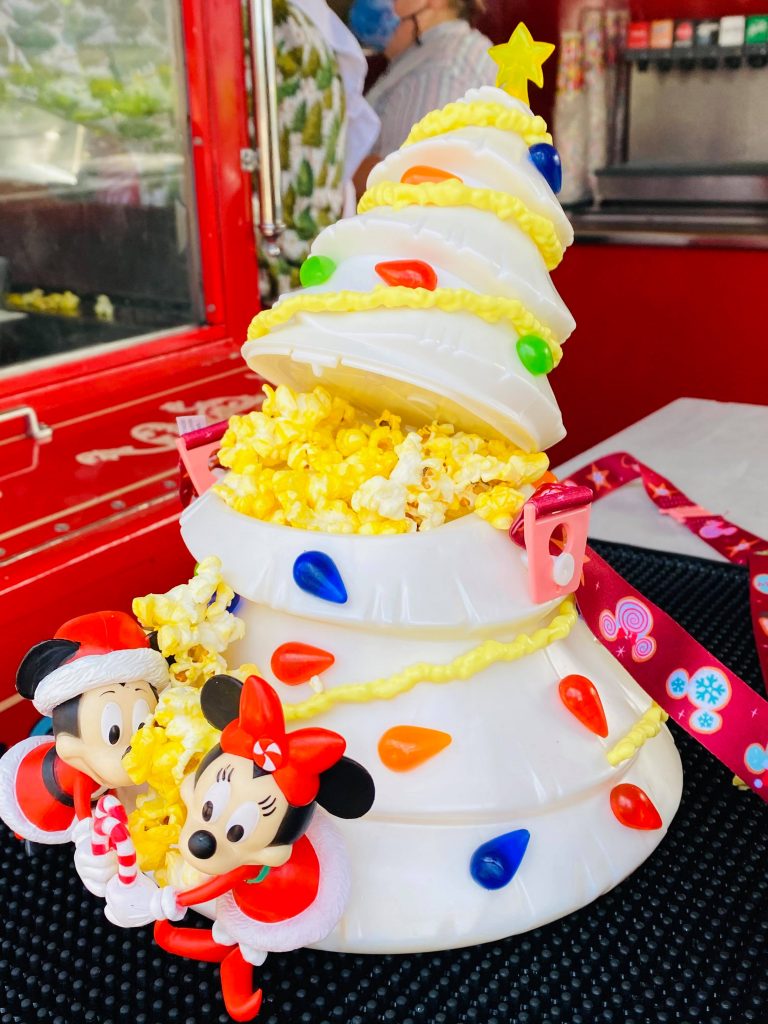 This one turned up at the Popcorn Carts at Magic Kingdom this holiday season and we were lucky enough to pick one up! Brimming with Yuletide charm this bucket had it all: Mickey, Minnie, ample storage and did we mention it lights up!? 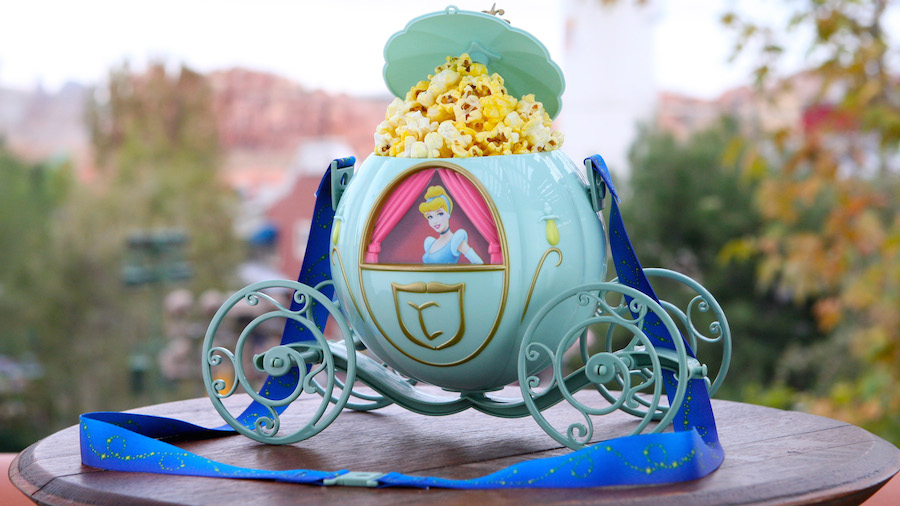 This stunning pumpkin carriage popcorn container was released to coincide with the debut of the live-action Cinderella back in 2015. The details on it were simply stunning right down to the image of Cinderella and the wheels! 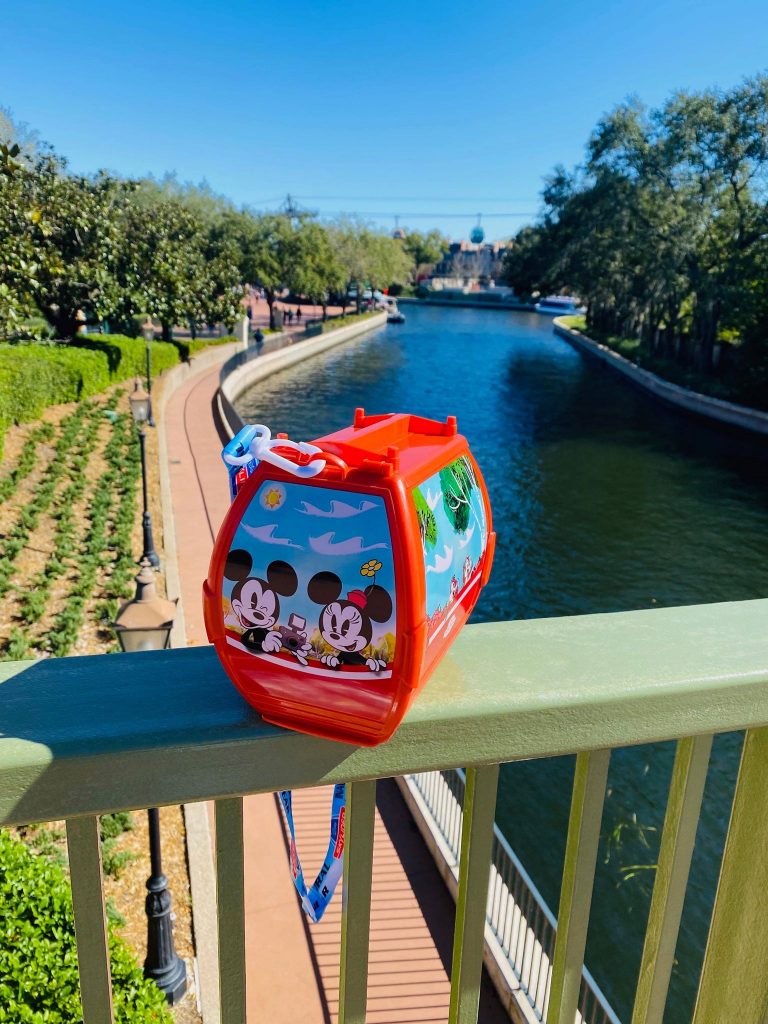 Last year for National Popcorn Day,  Disney World unveiled the Skyliner Souvenir Popcorn container to celebrate the inaugural year of Disney’s brand new mode of transportation! The were sold at Fife & Drum and featured adorable images of Mickey, Minnie, Chip and Dale taking to the skies in their very own gondola car!

KA-CHOW! One of our favorite places to go for popcorn at a theme park is the Cozy Cone Motel where they serve up multiple flavors like Dill Pickle, Buffalo Ranch, White Cheddar, Sriracha, Pizza and Garlic Parmesan!  You can even have a combo of your favorite flavors filled to the brim with our favorite Radiator Springs Racer- Lightning McQueen.  Disney California Adventure is currently closed but when it reopens we know where we’ll be!