If you’ve been following along with MickeyBlog you know that Disney Springs, Walt Disney World’s official downtown shopping district opened to guests last week. However, until this afternoon little had been said about timelines for opening the theme parks.

You can check out the official announcement from Disney here:

Tomorrow’s announcement should provide some clarity to guests with reservations in June and July.  However, during the Task Force meeting, it is up to Disney World to submit their plans and then the Task Force will approve them.

Here’s a look at the official agenda for tomorrow’s meeting: 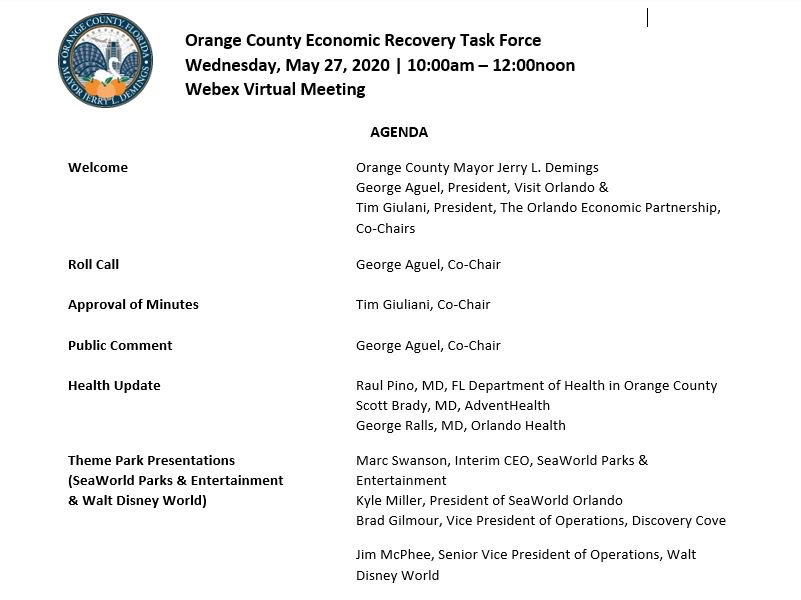 As we previously reported here at MickeyBlog, Universal Orlando announced their reopening plan during last week’s Task Force Meeting. At that time they announced they would be opening the theme parks on June 1, 2020, which was met with unanimous approval.

As you can see from the agenda above, SeaWorld is also expected to present their opening plans tomorrow. Here’s another announcement from WFTV’s Lauren Seabrook:

BREAKING: @WaltDisneyWorld and @SeaWorld will present their reopening plans to the Orange County Economic Recovery Task Force tomorrow morning at 10am. @WFTV

Seabrook has made several tweets since the original announcement above saying that the Orange County Health Department was onsite at Walt Disney World for inspections today and that initial plans are already in circulation. Take a look:

If you’ll remember, it was last week during the same Task Force meeting that Universal Orlando announced plans that they would be opening up on June 1, 2020, while Disney remained silent about their plans.

It seems like tomorrow we should be closer to an answer!

For those interested in following along with the Orange County Economic Recovery Task Force meeting in real-time tomorrow. They do offer a live stream that you can find here.

Alternatively, you can follow along with MickeyBlog and we promise to let you know as and when news breaks about a reopening date for Walt Disney World.