After months-long refurbishment, I am happy to announce that the World of Disney Store at Disney Springs in Walt Disney World is officially reopened! The store, which is always a must-do on my visits to Walt Disney World, is known as the best place to find all those souvenirs to commemorate your visit “home.” The reimagined store is guaranteed to make shopping much easier and more fun and adds a dash of pixie dust on top! 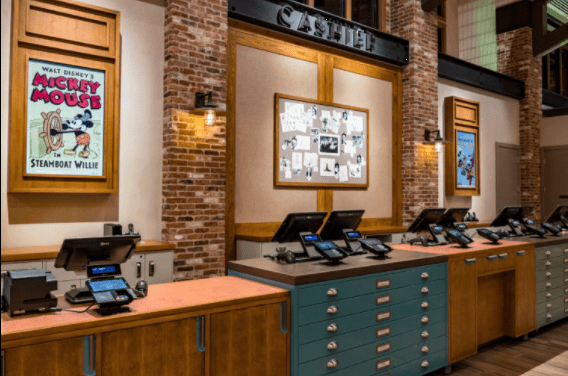 More than a year in design and development, the grand World of Disney makeover touched every feature and function in the store, even as the location remained open to guests. It’s as if the Fairy Godmother outfitted the store herself. From displays to signage to lighting and much, much more, the new World of Disney creates an exciting, dynamic shopping experience where the products are the stars and guests discover magical Disney storytelling seemingly wherever they look.

“We saw World of Disney as an opportunity to reimagine what Disney retail is today,” said Alysia Kelley, vice president of visual merchandising and location strategy for Walt Disney Parks and Resorts. “The new store design highlights the best of what is current and new, while also celebrating classic Disney heritage based in storytelling.” 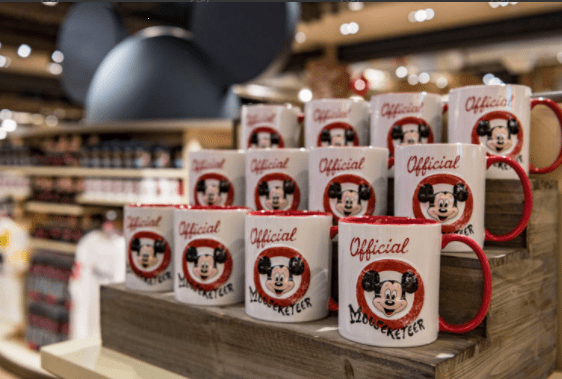 The transformation begins with the store’s exterior, which features new marquees and magical window displays. When guests step inside, they discover an open, loft-style atmosphere with such great visibility they may even fall in love with an item from across the room.

The merchandise also serves as décor in the new World of Disney. In one area, Disney Princess tiaras create a chandelier, while elsewhere a giant Mickey Mouse Club ear hat beckons guests to the new Mickey Mouse Clubhouse Collection. Several feature spaces throughout the store will change regularly, showcasing the newest and hottest Disney offerings of the season. When new displays debut, their stunning impact will leave guests feeling as if an entire section of the store was reimagined all over again. 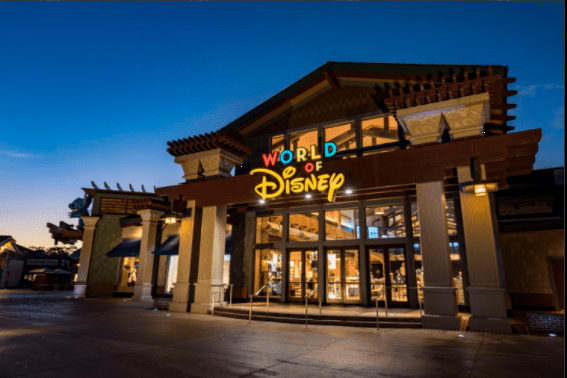 Complementing these displays are enchanted flourishes inspired by the history of Walt Disney Animation Studios and the “Nine Old Men,” the legendary animators who created classic films such as “Snow White and the Seven Dwarfs,” “Peter Pan” and “Fantasia.” For instance, ink jars suddenly swirl with color and animate artwork on the walls. Out of nowhere, blank pages fill with pencil sketches as if drawn by an invisible hand. Magical movie posters twinkle with pixie dust before coming to life. And when making purchases, eagle-eyed guests may notice the store’s sales counters are inspired by the desks and furniture used by animators of generations past.

Beyond delivering exceptional service to guests, Disney cast members play a role in this storytelling, as well; cast members will help guests discover the magical elements in the store and share insights into its pixie-dusted artwork. This commitment to placemaking makes the new World of Disney more than a retail experience – it’s truly a Disney experience. 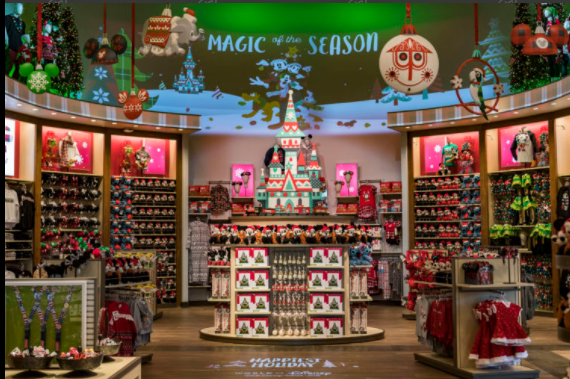 Signature displays within the reimagined World of Disney will rotate seasonally, giving the store a fresh new look. This holiday section is part of the Oct. 27, 2018, grand reopening of the anchor store at Disney Springs

World of Disney will routinely roll out exclusive Disney Parks merchandise, reinforcing its reputation as a must-visit for devoted Disney fans. Unveiled earlier in October was a new Mickey Mouse Club line with apparel and accessories featuring a vintage Mickey Mouse from the original television show; also revealed with the store’s grand reopening is the Nordic-inspired Disney Parks Holiday Collection 2018, complete with Disney-themed holiday décor, ornaments, apparel and more.

The World of Disney stores at both Disneyland Resort in Anaheim, California, and Walt Disney World are now offering guests the option to purchase new reusable bags, rather than use plastic bags. This program is part of The Walt Disney Company’s global commitment toward a significant reduction of single-use plastics by mid-2019. Featuring artwork of beloved Disney characters, these reusable bags will be offered in three sizes for a nominal fee. Traditional plastic bags are still available upon request at no charge. 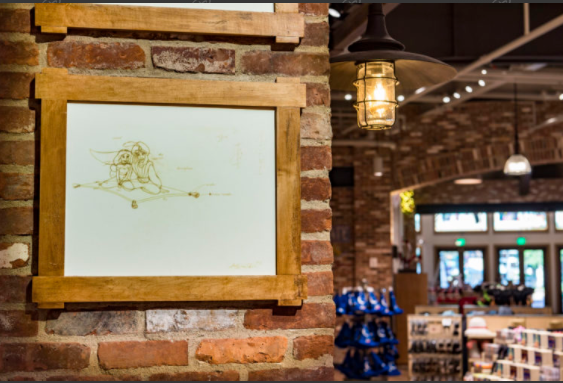 World of Disney is an anchor location at Disney Springs and offers the largest collection of Disney-themed merchandise in the world. Disney Springs is a one-of-a-kind retail, dining, and entertainment district in the heart of Walt Disney World Resort. With its namesake springs, beautiful open-air promenades and lakeside setting, Disney Springs evokes the charm of Florida waterfront towns at the turn of the 20th century. It is home to a collection of more than 150 shops, entertainment venues, and restaurants, including top-name retail brands, specialty boutiques, and dining experiences.

What do you think of the new World of Disney? Let us know in the comments below!

Planning a visit to Walt Disney World? Fill out the form below or send an email to Holly@MickeyTravels.com. As an agent with MickeyTravels (a Platinum Earmarked Agency), I will be on hand to help you with everything from finding your perfect package to nabbing those hard-to-get dining and FastPass reservations. I work with all Disney Destinations. Best of all, my services are absolutely FREE. Get in touch via email at Holly@MickeyTravels.com or calling 954.401.9577. Also, make sure to CLICK HERE to follow along with my Facebook page for all things Disney and giveaways!