The Ultimate Review: Frozen on Broadway

Just as I was making the turn onto 44th St. the temperature flashed up on one of the massive digital boards: 31 degrees Fahrenheit. Frozen. Even though I was cold, I smiled. It just wouldn’t seem right if it were on my way to see what is slated to be the most anticipated Broadway production of the season if it were warm outside. Queen Elsa would not have that. So, despite the whipping wind and frigid temperatures, my friend and I made our way towards the warm theatre to see Frozen. 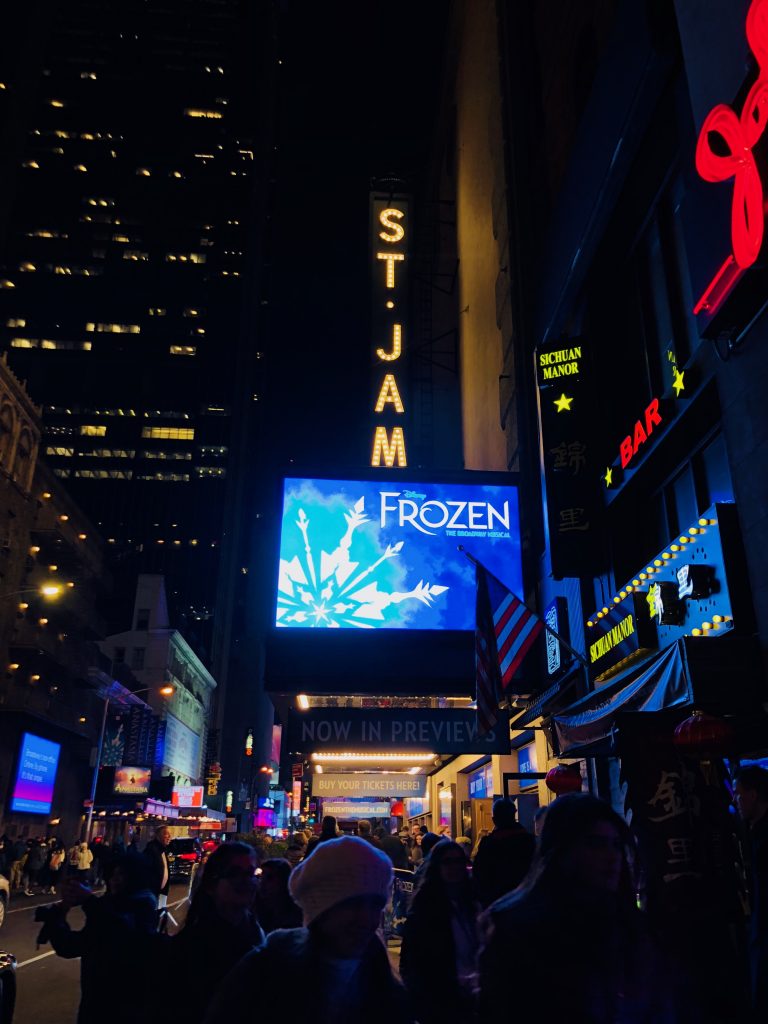 I’ve been inside the St. James theatre many times in my life. For a Broadway house it’s pretty sizeable and with orchestra, mezzanine, and balcony seating, it’s tough to sell out, especially on a random Thursday. ‘Sold out’ doesn’t even begin to describe it. Adults and kids alike were absolutely buzzing about the lobby area before the show began and the anticipation was physically palpable. The moment the lights dimmed, the place erupted in applause, and I knew right then and there that this performance would feel more like a rock concert than a traditional Broadway musical.

I’m assuming you’ve seen the film if you’re reading this article, so I’ll spare you the plot details and get right on with an analysis of how Disney brought this beloved movie to the stage! Right off the bat, the set design and costuming teams flexed their muscles with a Nordic, snow-swept stage covered in actors in beautiful garments that established setting within seconds. The opening sequence gave the audience a window into the childhoods of Anna and Elsa in a more detailed manner than the film had time for which I thought was necessary considering the bond Anna and Elsa have when they’re grown.

Set Design Worthy of the Queen!

For me, the production really hit its stride after the opening, when we first meet Anna and Elsa as adults. The massive, rotating set turned to reveal Anna, as an adult, waiting outside of Elsa’s door, and another rotation reveal an isolated Elsa. Anna (Patti Murin) and Elsa (Caissie Levy) garnered huge rounds of entrance applause from the audience when they made their first appearances! The inauguration scene was the first of the show that was so visually stunning, I felt as though I were truly watching the movie instead of a live-action performance. In fact, there were a few points throughout the show that were so cohesive, I’d have sworn I was in Arendelle! 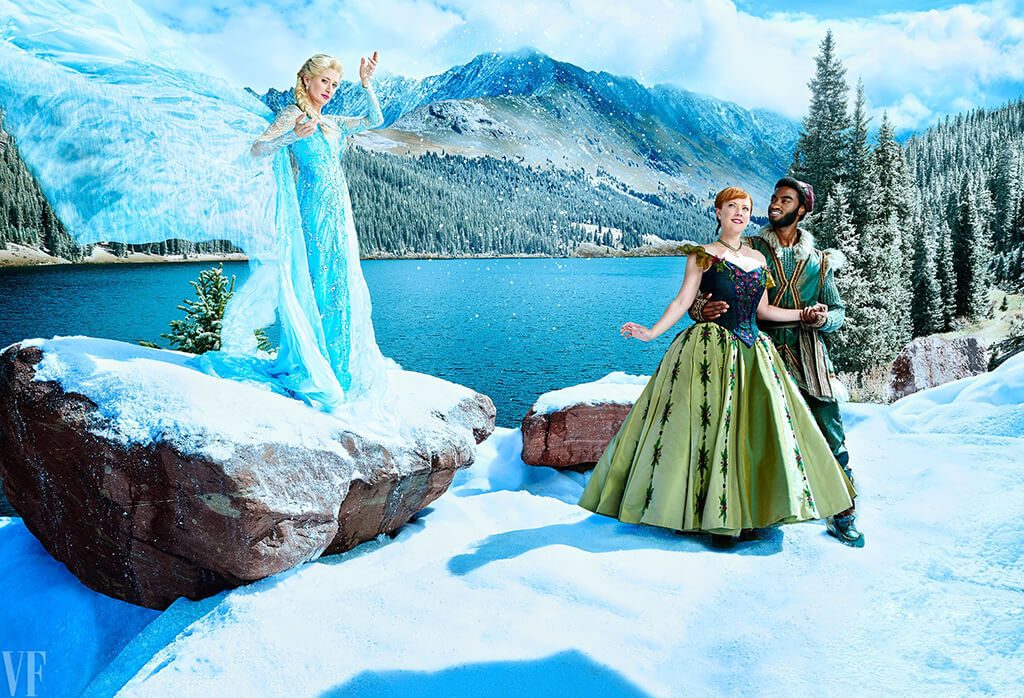 The first big ‘wow’ moment for me happened at the end of the inauguration sequence. Angry that Anna was about to marry a man she just met, Elsa can’t control her anger, releasing her powers for the first time in public. A perfectly timed lighting cue accompanied the first of the impressive effects as giant, jagged pieces of ice appeared in 2 seconds flat, eliciting an ‘ooo’ from the audience. I’ve seen lots of shows, and if Frozen succeeds at one thing, it’s the ability to move enormous set pieces in record time. The escape to the North Mountain sequence featured great use of the stage as the organized chaos was lit immaculately, successfully drawing attention to what needed highlighting. If you couldn’t already tell, I was most impressed with the set and lighting and how the integration of digitization really worked! I never usually like projections or digital mapping style lighting in a stage production, but in Frozen, Elsa’s powers couldn’t have been better portrayed.

Kristoff and Sven joined the show when Anna chases her sister out into the storm. Kristoff and Anna sing “What Do You Know About Love” upon meeting, immediately establishing their attraction. The number is fun and integrates a cool scene on an icy bridge that ultimately requires each to save the others life when they slip. 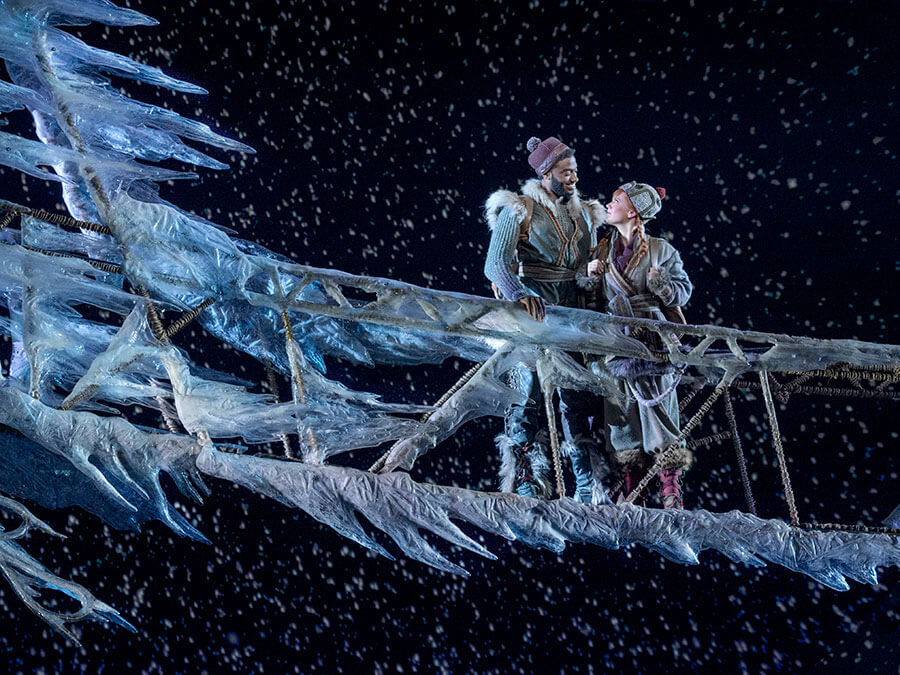 Finally, at the end of act I, the moment every person in the audience had been waiting for began. We hadn’t seen her since she fled from her inauguration, and her absence made her re-appearance all the more well-received. Elsa simply walked out onto the bare stage without pomp or circumstance, as the keyboardist played the Oscar-winning opening to the famed “Let It Go”. If you’re wondering how they do the effects, I’m not about to give it away! But I will say this: watch the animation sequence from the film, and memorize it before you see the show.

I’ve seen the movie once or twice (okay probably 10 times) and I know moment for moment what happens. The design team of the show nailed each effect from the glove blowing in the mountain wind right down to that oh so anticipated costume change in the middle of the song. Caissie Levy (Elsa) didn’t have to work too hard for the applause considering it’s the one number everyone came to hear- but she did anyway. She had everyone eating out of the palm of her hand at ‘let the storm rage on!’ but what she did vocally with the final ‘the cold never bothered me anyway’ was when everyone collapsed at her feet in worship! Of course, this is the defining moment for Elsa. Levy didn’t stray from the animated character at any point during the show. As a matter of fact- no one did. While I wished Levy and Murin (Anna) would have put her own spin on a few of the scenes, I don’t think originality is what will make this show a success. For better or for worse, everyone in the place wanted to see the characters the exact way they know them from the movie, and lucky for them, Disney’s creative team recognized this and directed the production accordingly.

What to Expect When You Go

From the moment “Do You Wanna Build A Snowman” began, I knew this crowd was here for the songs they’ve grown to love. If you’re contemplating purchasing tickets and are in fear that your favorite song may not have made the cut: no worries! Every single song from the film made the jump from screen to stage, and the new songs written for the production did not seem out of place. In fact, both “Love Is An Open Door” and “Fixer Upper” received true Broadway makeovers complete with big orchestrations and massively kooky dance breaks. The casting was well done and there was no question that the actors chosen to portray the famous sisters landed the roles because of their likeness to the cartoon characters. Basically, the entire production was a carbon copy of the movie and for the target audience; I think it was the right move.

Everyone in the house was there to see the Frozen they know, and from costumes right down to the way Olaf said his lines, you’d swear you were watching the film if you didn’t know any better. I would recommend this production to any family visiting New York who wants to add a touch of magic to their visit. Know going in that you’ll see the Frozen your kids know and love, complete with incredible set design, amazing costume work, and some pretty killer vocal gymnastics from the cast. So, will you see this production if you visit New York? Which Disney on Broadway show is at the top of your list? Let us know in the comments below!