There has been a new addition to the Ultimate Princess Celebration Limited Edition Dolls from the Disney Designer Collection. This one just happens to be the fairest of them all, Snow White. With her gorgeous dress regally reimagined by Disney Product Design Manager Steve Thompson, the Snow White Limited Edition Doll releases June 14 on shopDisney and at Disneyland Resort, and is coming soon to Walt Disney World Resort. 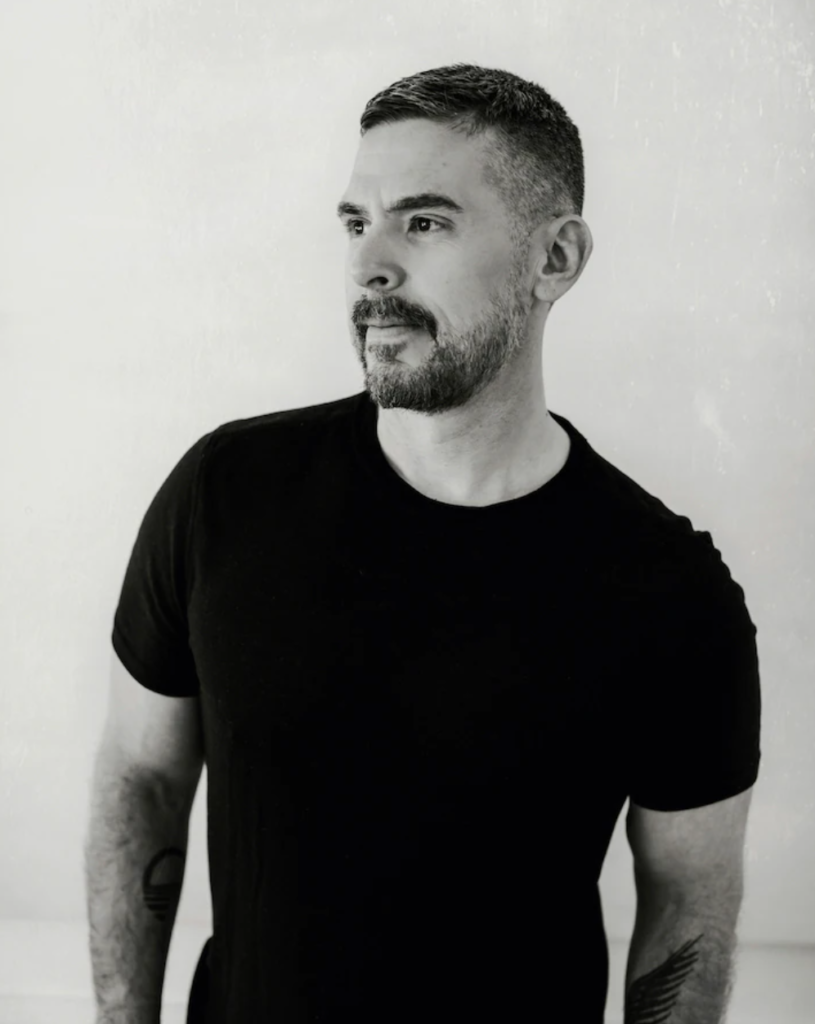 Read on to see as artist Steve Thompson shares insight into his creative process and inspiration for designing the Disney Princess’s unique new look.

What is your role at Disney?

How long have you been working on the Snow White doll?

The process started in late December 2020, with my initial sketch. So, it’s been a while for her to finally make her debut. 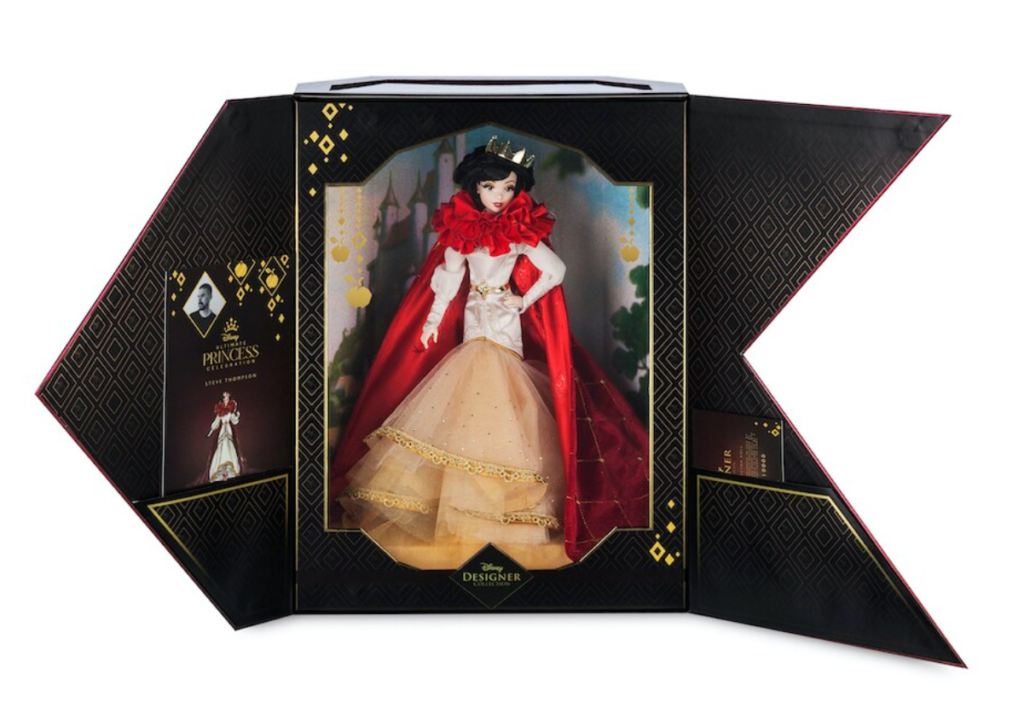 What is the creative process behind designing the doll?

This was a tricky assignment as it was left completely up to each individual designer and their own story of how they were inspired by the characters. The result is a very eclectic, unique collection that I feel proud to be a part of. For me, the creative process always starts with the film as a jumping-off point. Then I try to figure out how to take that source material and filter it through the lens of the assignment, which was to imagine what this character might wear to a modern fashion gala. This isn’t your everyday version of the character, so we were tasked with thinking outside the box for our designs.

“Snow White and the Seven Dwarfs” was the very first feature-length animated film and our very first princess. I wanted to give her a royal and regal look that would honor her place in the company’s history. For me, it’s almost as if Snow White is reclaiming her place as the original princess by portraying herself in a very queen-like way. The references in the design to The Evil Queen are intentional, but not meant to portray Snow White as evil. She has made those symbols part of her story. They have made her stronger and is owning them in her way.

Being a gala, the outfit needed to be dramatic and over the top. So, many elements are super exaggerated and not meant to be something for everyday wear. The film “Snow White and the Seven Dwarfs” was a huge risk for Walt Disney at the time it was made. That risk paid off and ended up changing film history. She helped pave the way for animated films and for kids like me who grew up wanting to be an artist for The Walt Disney Company. In many ways, she is the reason we’re all here this many years later. The film and character of Snow White remind me as an artist that it’s good to take risks.

Where do you get your inspiration?

Inspiration can come from anywhere. This particular dress design came to me on my morning walk. I’ve seen the film many times over the years and just wanted to clear my head. By the time I got home, I had the basic design I wanted in mind and did my first drawing, which ended up being the design we went with. In this case, much like the assignment, I wanted to go with my first impression of her and not overthink it. I find that if you second guess yourself too often you become afraid to take risks and would risk going with something much more expected.

What is your favorite thing about your job?

After almost 28 years of working for The Walt Disney Company as an artist, I am still delighted that I get to work on all of these amazing characters both old and new. Every day brings new challenges, which keep me on my toes as an artist. I am still learning. And I think that is the key to staying inspired. 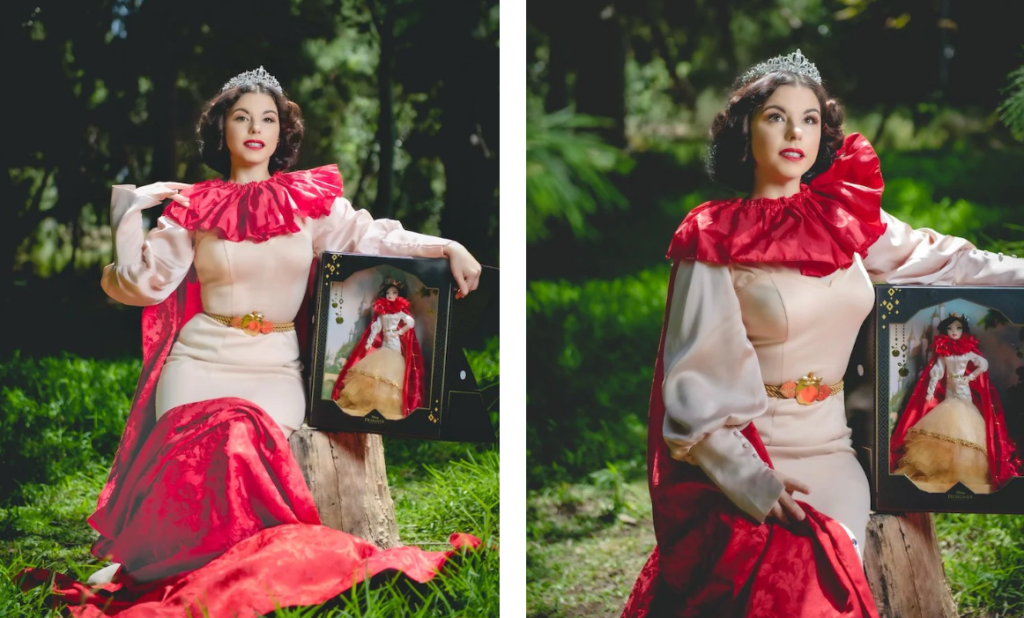 On June 1, the Snow White Limited Edition Doll was revealed to the public by “rebel princess” and cosplayer Amber Arden (@amberarden). Arden magnificently brought the doll to life on her Instagram platform by creating a beautiful cosplay ensemble directly inspired by Steve Thompson’s design.