On Tuesday, May 17th, National Geographic Kids joins the festivities for International Dinosaur Day. With a number of titles readily available for dinosaur fans of all ages, there are so many ways to capture the excitement of “DinoMAYnia,” the second year for National Geographic Kids’ way to mark the prehistorically awesome day.

Among all of the titles available from the publishing company, a few stand out as super options for the range of readers from infants to middle schoolers.

Largely known for their colorful images, board books make such a great choice for the under-three crowd for their wowing, bright illustrations and text features as well as their durability. The $7.99 Little Kids First Board Book: Dinosaurs certainly checks both of these boxes. 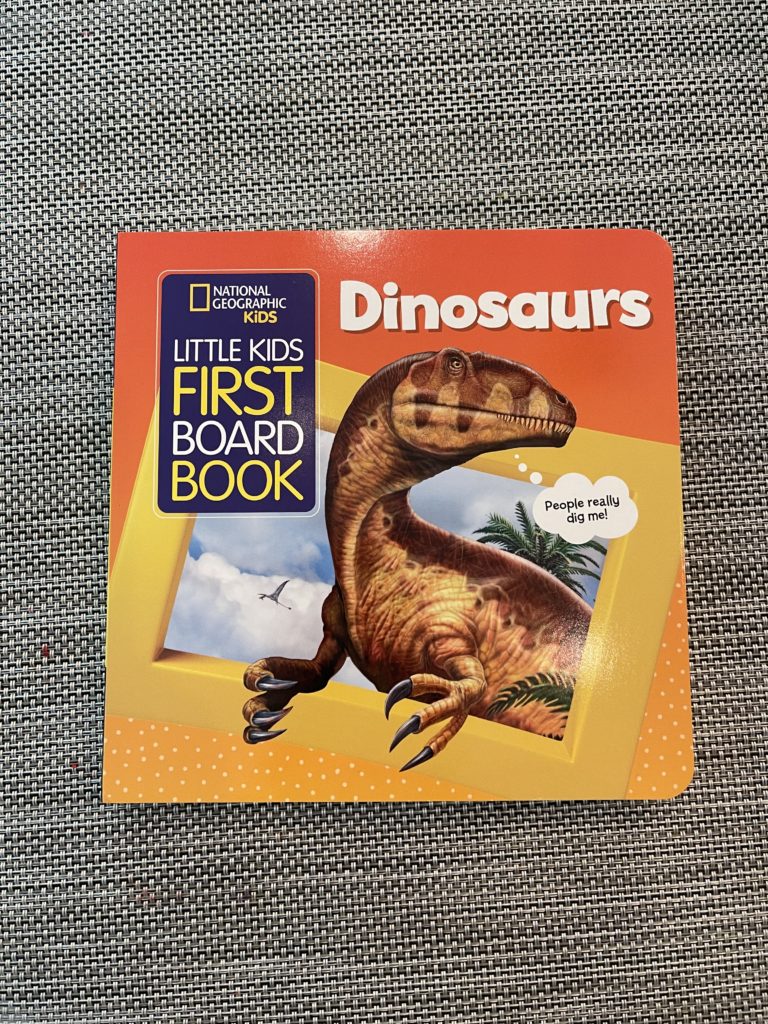 Each pair of pages utilizes bright, coordinating colors. Like so many National Geographic Kids publications, the pages introduce a central concept in the main space and add interesting details in feature boxes. Lucky for the grown-up readers, this text also shows pronunciation for each dinosaur name, which is super helpful. 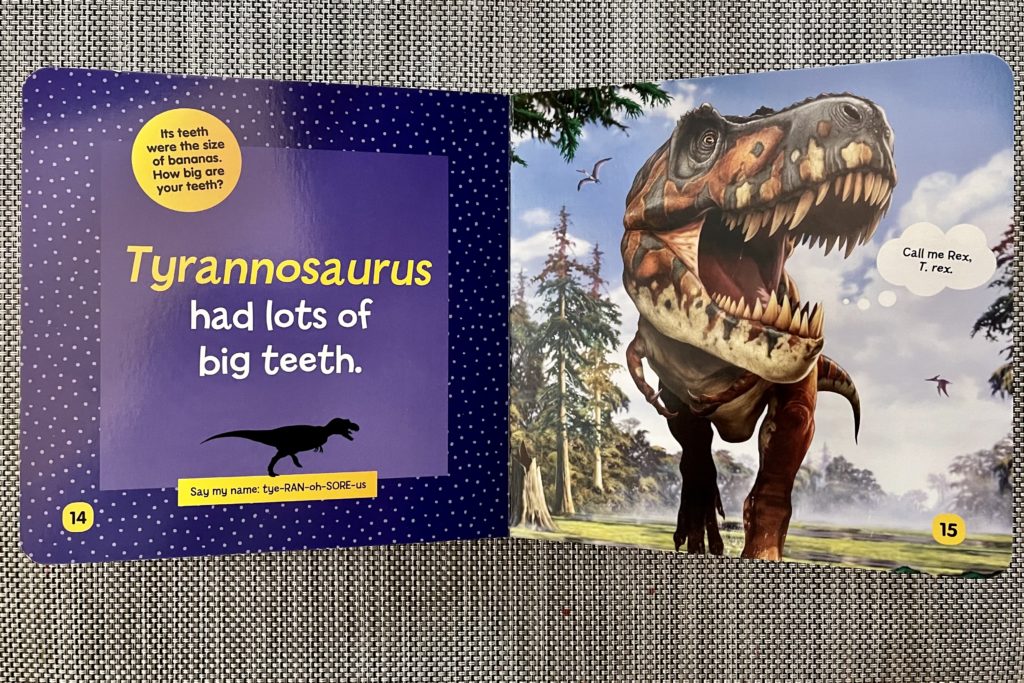 The often-humorous speech balloons add a bit of light-heartedness to the text, even from the ferocious Tyrannosaurus.

Ranked the #1 Best-Selling Kid’s Encyclopedia on Amazon, the Little Kids First Big Book of Dinosaurs is a must-have for elementary school-aged readers. Aimed at preschoolers through 3rd graders, the text organizes the prehistoric giants into categories based on their size. 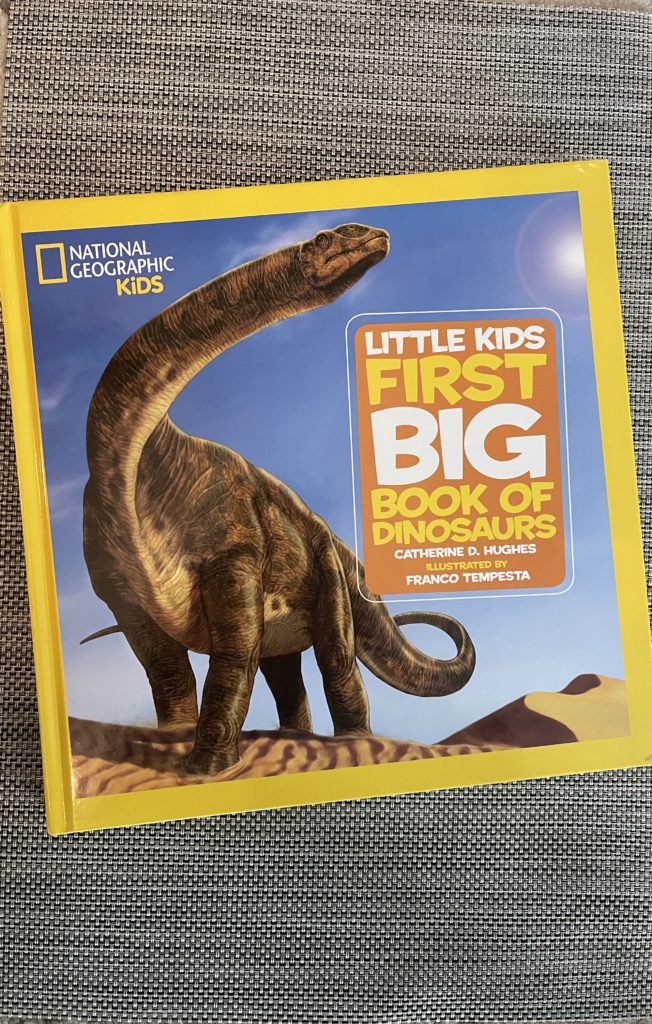 Written by Catherine D. Hughes and illustrated by Franco Tempesta, the $14.95 text offers an abudnace of quick details about a range of dinosaur species as well as short paragraphs filled with interesting information. It also introduces students to key informational text features, like the Table of Contents, Glossary and Index. 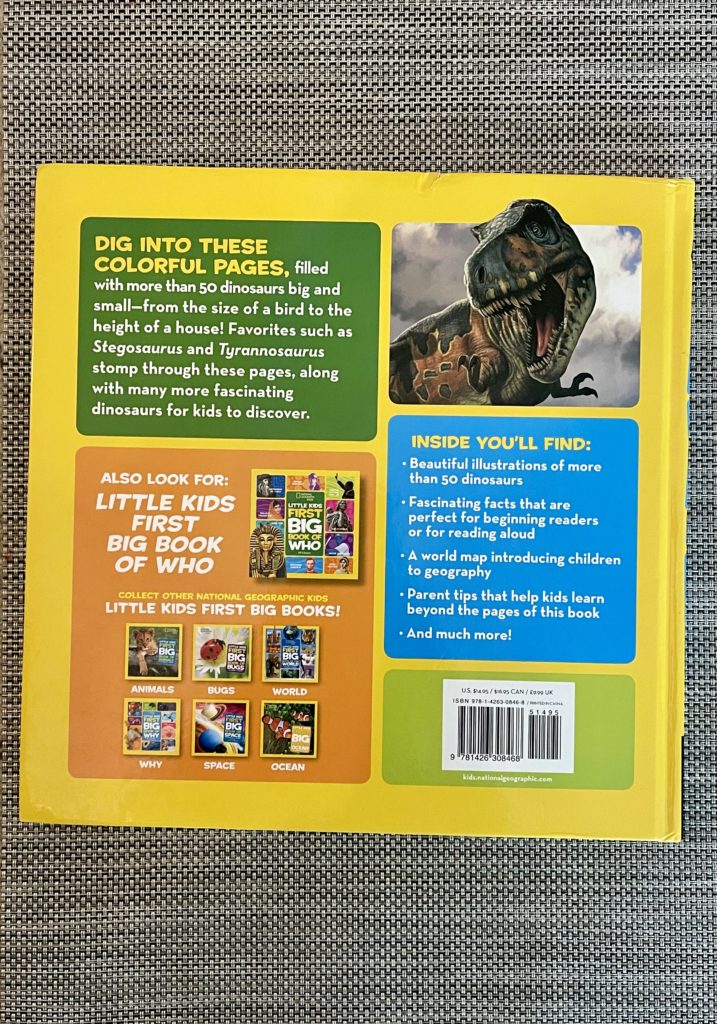 The back even offers Parent Tips to enhance the reading experience. We really enjoyed the jokes provided and opportunities for “watching dinosaurs” via their closest living relatives, birds. 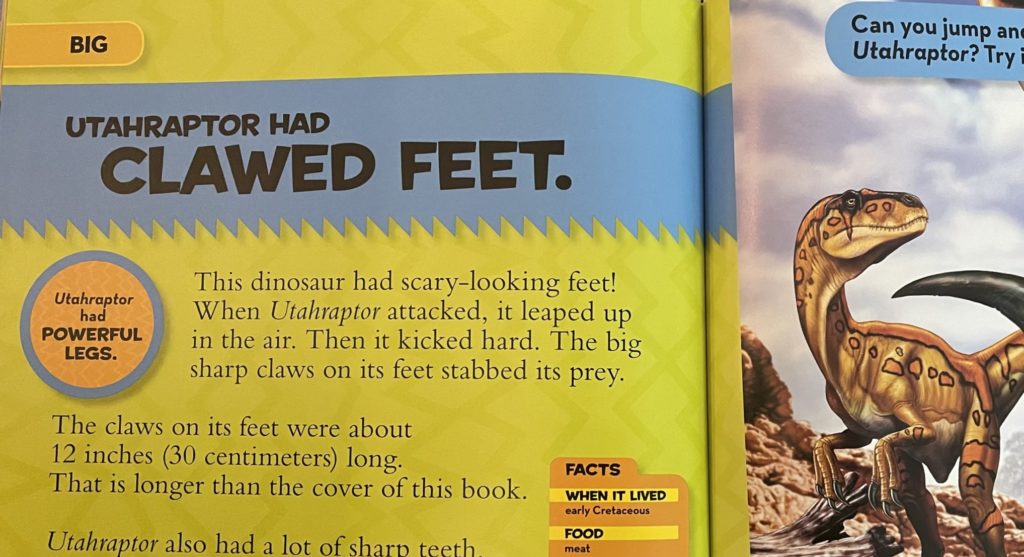 Despite being aimed at younger readers, the text is ranked at a Lexile level of 660L, according to its Amazon page. This ranks the text at a difficulty level equivalent to The Lightning Thief by Rick Riordan, E.B. White’s Charlotte’s Web, and Kate DiCamillo’s Because of Winn-Dixie, so newly independent readers may still need a bit of assistance to conquer this text.

Dubbed on its cover as “the most complete dinosaur reference ever,” Ultimate Dino-Pedia, Second Edition makes a stellar gift for the older dinosaur enthuasiast, specifically someone between the ages of seven and 10. The $24.99 text provides an enormous amount of detail about more than 600 dinosaur species. 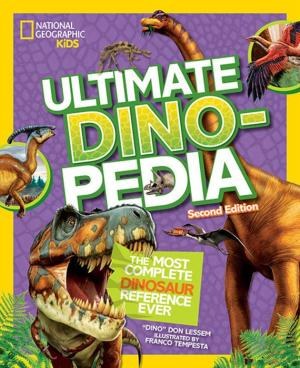 Written by “Dino” Don Lessem, who advised on the “Jurassic Park” films, the book even introduces readers to ten new dinosaur species. The almost 300-page reference text shines not only in its information but also in its helpful guide that shows readers how best to tackle the wealth of facts. 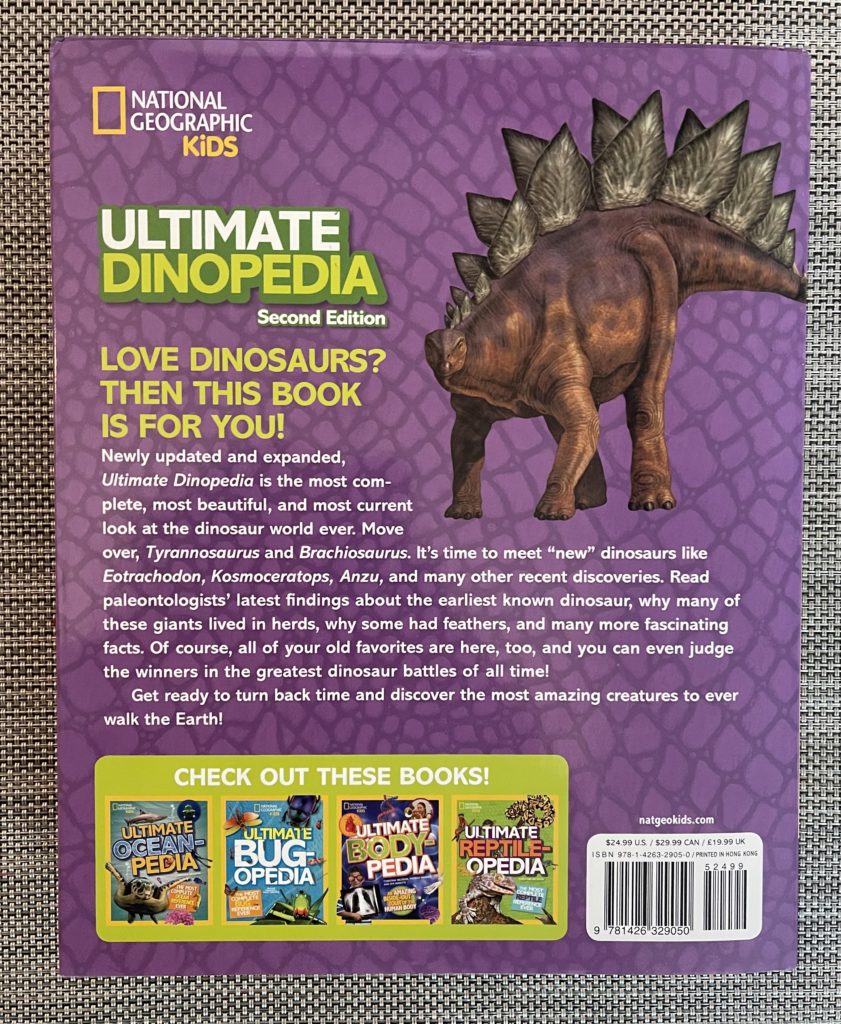 “It shows dinosaur species all the way from the first to the last, and even shows kids that some dinosaurs had feathers. There is detailed research about dinosaurs, and it would be great for any kid who wants to learn more about such cool species,” said Sophie, a third-grader who reviewed the text with us. She especially liked the text’s early pages that introduce readers to concepts like fossil creation, migration and hearding, and to mistakes made by the dinosaurs themselves.

For more ways to celebrate International Dinosaur Day on Tuesday, visit the DinoMAYnia hub at National Geographic Kids’ website. Stay tuned to MickeyBlog too as more information rolls out this week.