Details on Ticketing, Masquerade, and More at the D23 Expo 2022

Exciting details were announced today about the D23 Expo 2022 presented by Visa. “The Ultimate Disney Fan Event” is back, returning to the Anaheim Convention Center from September 9th through the 11th, to celebrate the magic and excitement of Disney and kick off Disney100, the centennial celebration of The Walt Disney Company. The Expo will showcase what’s new and what’s on the horizon from Disney theme parks, streaming, television, music, products, and films.

D23 Expo 2022 will feature more than 50 shows, presentations, and panels, including the Disney Legends Awards Ceremony, which honors the talented individuals who have made significant contributions to the Disney legacy, as well as an all-new exhibit curated by the Walt Disney Archives highlighting the 100th anniversary of Disney.

Take a look at the ticket pricing. 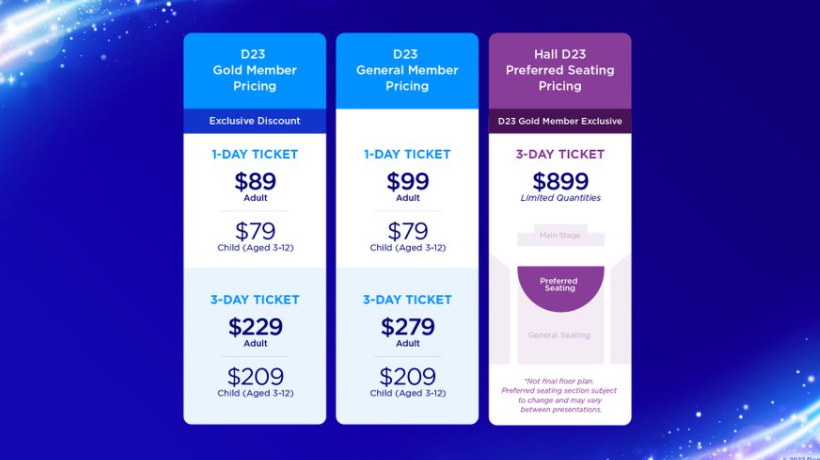 Tickets for D23 Expo 2022 will go on sale at 12 p.m. PT on Thursday, January 20, with an exclusive presale for Visa cardholders who are also D23 Members starting on Wednesday, January 19, at 10 a.m. PT. Guests must be members of D23: The Official Disney Fan Club—either at the complimentary General Member level or at the Gold Member level—to purchase tickets.

D23 Members who are also Visa cardholders, and who pay with their Visa, will have pre-sale access to a limited number of one-day and three-day tickets for 24 hours beginning January 19, 2022, at 10 a.m. PT, while supplies last.

This year, a limited number of Hall D23 Preferred Seating tickets (which include admission for all three days and a reserved seating section for all Hall D23 presentations) will be available exclusively to D23 Gold Members.

Mousequerade
OK, now you know how to get your tickets… but what are going to do once you set foot inside the Anaheim Convention Center in September? While details on our panels and presentations are still to be announced, one thing we know for sure is that you’ll need to come to D23 Expo 2022 dressed to impress, because the Mousequerade costume contest is returning! This year, the fabulous and fashionable Nina West will be hosting, with Yvette Nicole Brown (Big Shot, Disenchanted), Ashley Eckstein (voice of Ahsoka Tano and creator of Her Universe), and Ally Maki (Toy Story 4, Home Sweet Home Alone) judging the always impressive selection of contestants.

The contest will feature new and returning categories including “Off the Screen,” “Imagine That!,” “Magical Mashups,” and “Cast of Characters,” as well as a fan-favorite award voted on by the audience and a “Best in Show” prize of $2,300.

The aircraft was seen for years as part of the Studio Backlot Tour at Disney’s Hollywood Studios and will be on display at D23 Expo 2022 for guests to see in an exhibit called Mickey Mouse One: Walt’s Plane presented by Amazon.

And So Much More!
Returning to D23 Expo 2022 will be the massive show floor full of immersive experiences and special opportunities for guests to see what’s next for Disney around the world—and they may even run into their favorite Disney stars, characters, Imagineers, animators, and filmmakers. Guests can also enjoy numerous shopping opportunities—many featuring D23 Expo-exclusive collectibles—at an assortment of Disney and partner pop-up shops including the D23 Expo Emporium, where the ultimate Disney fans can find their ultimate treasures.

The 7,000-seat Hall D23 returns and will be joined this year by the 3,000-seat Premiere Stage, the 1,200-seat Backlot Stage, and the expanded, 700-seat Walt Disney Archives Stage for more presentations curated by the staff of the Archives. On the main show floor, the D23 Expo Live! Stage will feature performances, appearances, demonstrations, and more all weekend long, many of which will be livestreamed to guests at home.

Stay tuned to MickeyBlog for more D23 Expo presented by Visa news as it breaks.

Thinking about a Disney getaway? 2022 packages are open! Fill out our form below or contact me today for your FREE, no-obligation quote for a Walt Disney World, Disneyland, Disney Cruise Line or Adventures By Disney vacation! My magical planning services are included at no extra cost. Get in touch at 843-288-1130, via email at whitney@mickeytravels.com or follow along on Facebook and Instagram.