The rich get richer, Disney resorts stretch beyond the stars, and Gaston swipes left HARD on an unsuspecting fan.

Let’s talk about the Disney Headlines for the week, some of which are sequels to other recent stories.

Okay, don’t answer that. I don’t wanna know, as I’m not sure I could look you in the eye afterward.

Seriously, the Orlando Sentinel and other publications just filled in the blanks about why Disney is moving some jobs to Florida. 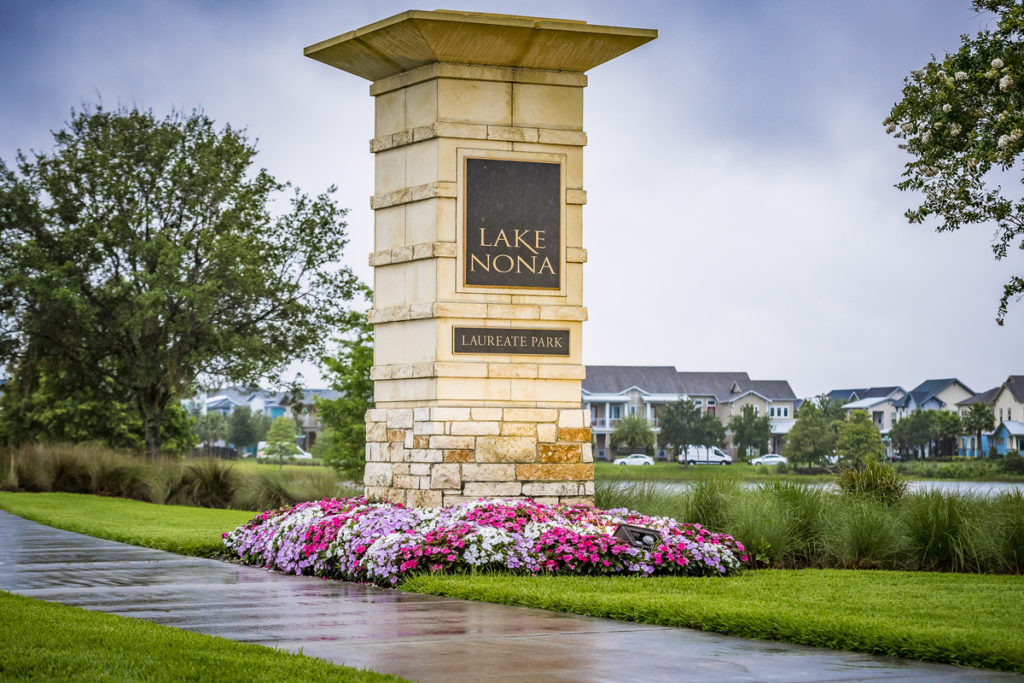 Recently, Disney executives indicated that they might invest as much as $864 million to relocate jobs to Florida.

That sounded too good to be true to Florida residents, and it turns out that it is. The state will apparently subsidize Disney up to $570 million for the move.

According to reports, that’s how much Disney stands to make in tax breaks to switch 2,000 high-profile jobs from California to Florida.

So, this deal breaks down like a sports stadium negotiation. One party claims they’re spending $864 million.

In reality, taxpayers are fronting two-thirds of the money. So, Disney is on the hook for less than $300 million.

The Orlando Sentinel summarizes the situation thusly: “The tax break would be among the largest in state history for a single corporation.”

Plus, the company gains the land in Lake Nona plus even more power and influence in Central Florida, where it’s already borderline above the law.

We’re watching a local battle play out behind the scenes between two powerful companies, NBCUniversal and The Walt Disney Company. 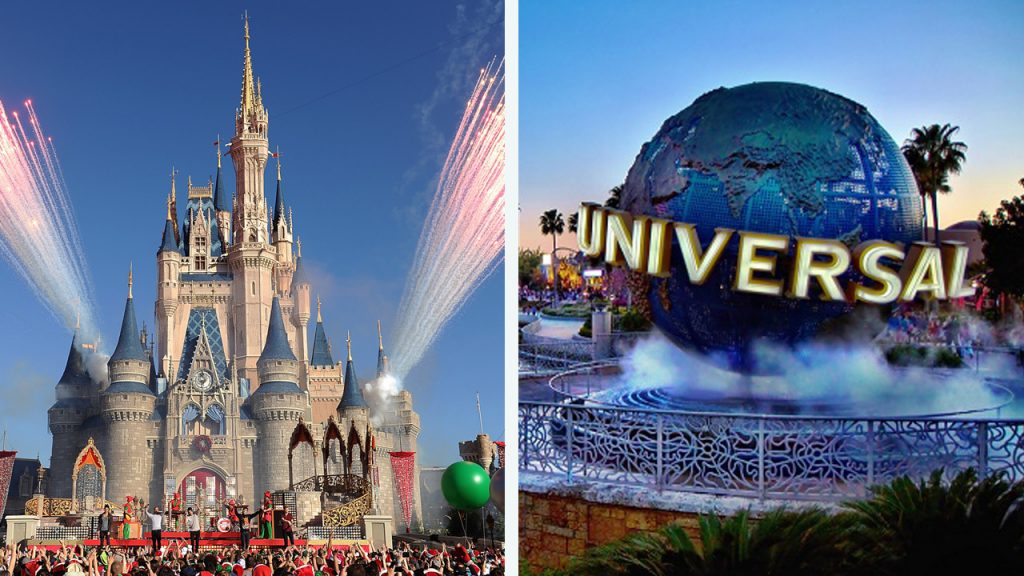 Universal, a division of Comcast, wants a Brightline station located near the Orlando Convention Center.

Not coincidentally, the next Universal Studios theme park will reside near the Orlando Convention Center.

Meanwhile, Disney thought that it already had a deal for Brightline to operate two hubs in Central Florida.

One WILL reside at Orlando International Airport. I say that with confidence since construction is already underway.

Disney had understood that a location near Disney Springs would be the only other station in town.

Conversely, Universal has angled for that I-4 locale, which it would like to be an intermediate stop between the airport and Disney Springs.

In other words, guests would stop near Universal Studios first, thereby encouraging tourists to stay at a hotel there rather than a Disney one.

This option has created a schism as the International Drive tourist groups supported the idea. Yet, at the same time, residents of Hunter’s Creek vehemently opposed it.

Even the Orlando Sentinel took the unusual step of posting an editorial piece wherein the writers admonished Universal for greed.

After intense debate, government officials did what they do best. They delayed any decision until later. Here’s the pertinent text:

“The Central Florida Expressway Authority agreed unanimously Tuesday to delay indefinitely a decision over whether to allow Brightline Trains to build passenger rail beside the agency’s State Road 417 on the way from Orlando’s airport to Walt Disney World and Tampa.” 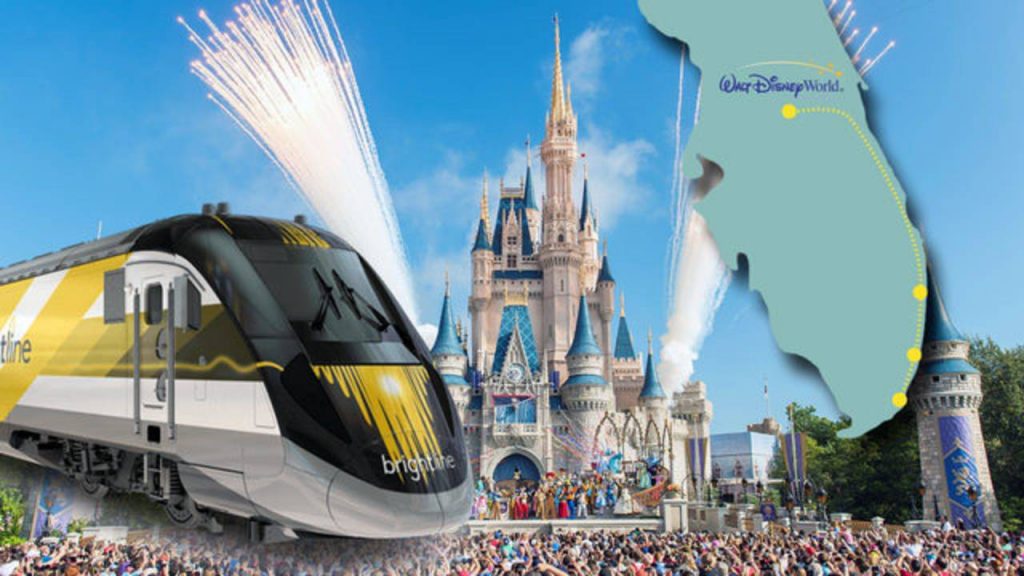 This story remains a powder keg that will eventually explode on either Universal or Disney, though.

Are You Ready to Go on a Star Cruise?

Okay, the global cruise industry remains on pause for the most part. However, nobody has said anything that stops you from taking to the skies! 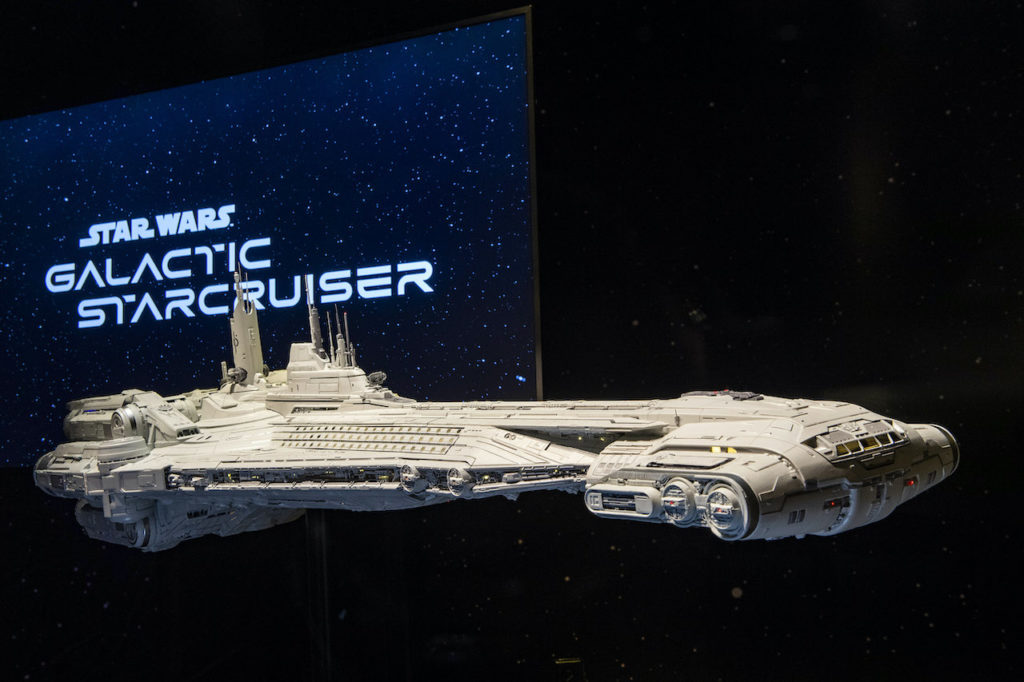 Yes, star cruises remain on the menu, and Disney is readying its entry, the one that isn’t exclusive to billionaires.

Disney just released a poster for Star Wars: Galactic Starcruiser, the Walt Disney World luxury hotel that will open in 2022. 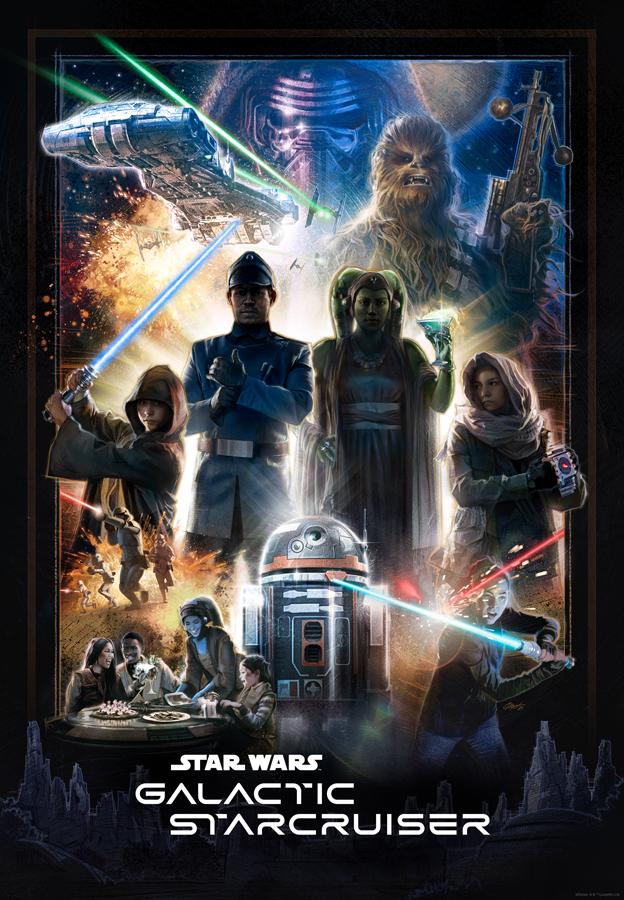 The poster indicates that families don’t need to align their views on The Force or even The Resistance.

The kids and parents wear costumes reflecting conflicting ideologies, which is significant. It reinforces that everyone will experience a personalized Star Wars story. 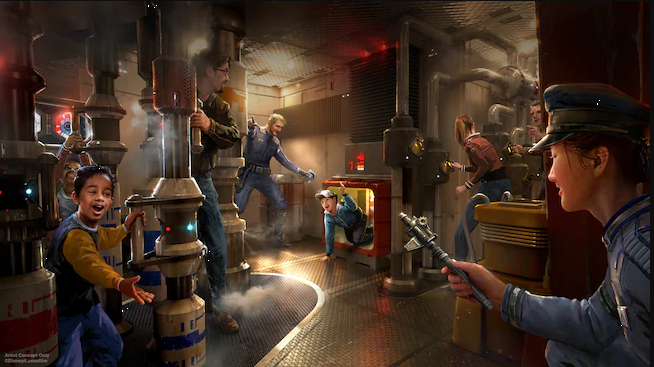 You don’t have to compromise and do the same thing as the other members of your traveling party.

If, say, your spouse would never turn against the Jedi even in a videogame, that’s okay. You can still join the Dark Side! After all, they have cookies!

The Crown of Corellia Dining Room also receives some attention on the poster, reminding guests that an upscale dining experience is available at the resort.

Finally, several Star Wars characters, including Chewbacca and Kylo Ren, appear. So, it’s a safe bet that they’ll be part of the Galactic Starcruiser story, too! 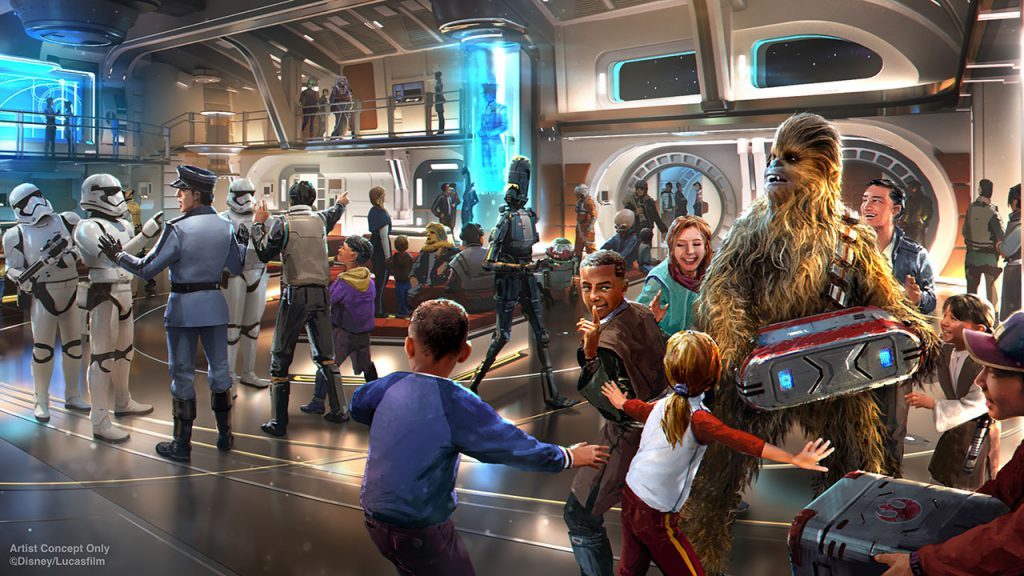 A broken-hearted guest told Gaston that she’d recently gotten dumped. She was hopeful that the man with biceps to spare might go out with her.

Here’s what happened next:

So, yeah. She’s probably not gonna watch that Gaston series coming to Disney+.

(I love the cast member’s “yeah, I crushed you” strut afterward.) 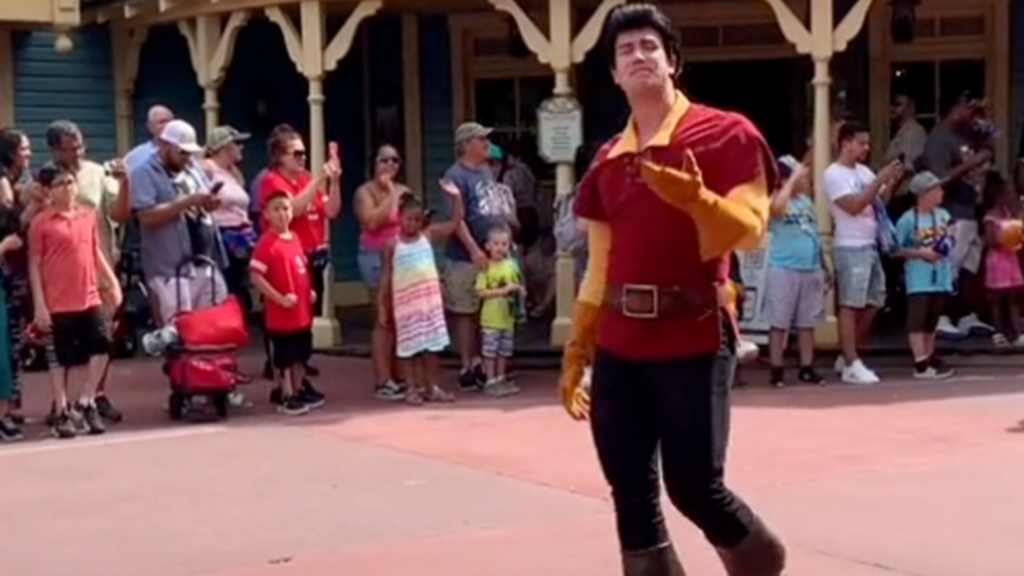 The other headline this week doubles as a Rorschach test. The Black Widow debate has spun out of control, as Yahoo! and Deadline toed the company line.

These writers took the bait that the National Association of Theater Owners (NATO) dropped last Sunday. 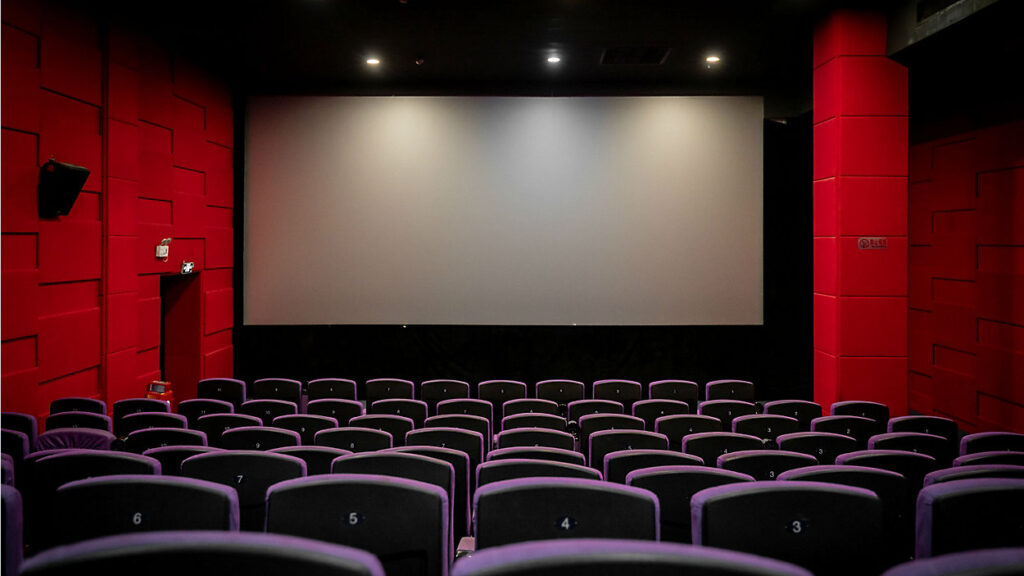 That organization sought to punch back after Disney crushed it with the reveal that Black Widow netted almost as much on Disney+ as in North American movie theaters. 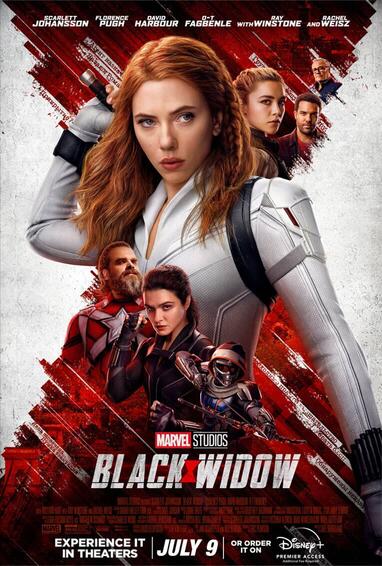 Hilariously (and hypocritically), they said nothing when F9 did the same thing two weeks before that.

Why is NATO lashing out at the only movie studio that people care about? It needs Disney in tow to keep other studios in line. 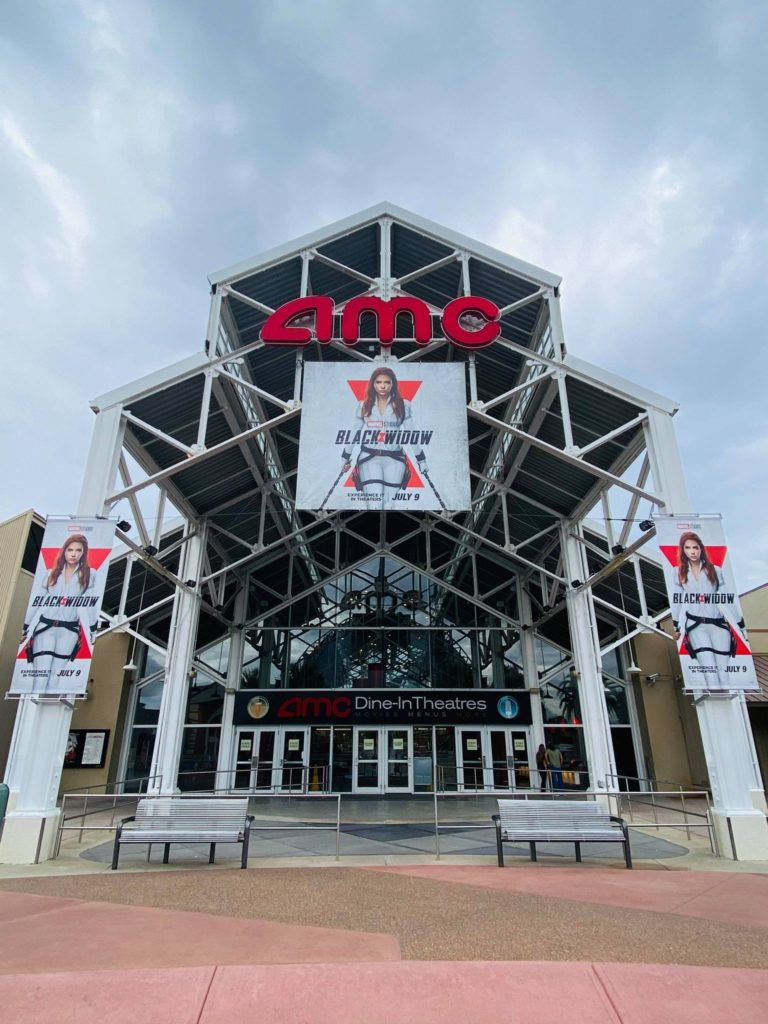 In proving that Disney didn’t need movie theaters to make money off Black Widow, it threatened the very existence of NATO.

As usual, my old friends at Indiewire offered a fair evaluation of the situation. If you’re a Disney fan, you don’t care about what anybody is saying, though.

You love that you can watch Black Widow at home right now, right? And you’re glad to have that option for Jungle Cruise as well, aren’t you? Checkmate, NATO.

Okay, you probably don’t care about this as much as I do. So, please trust me here. 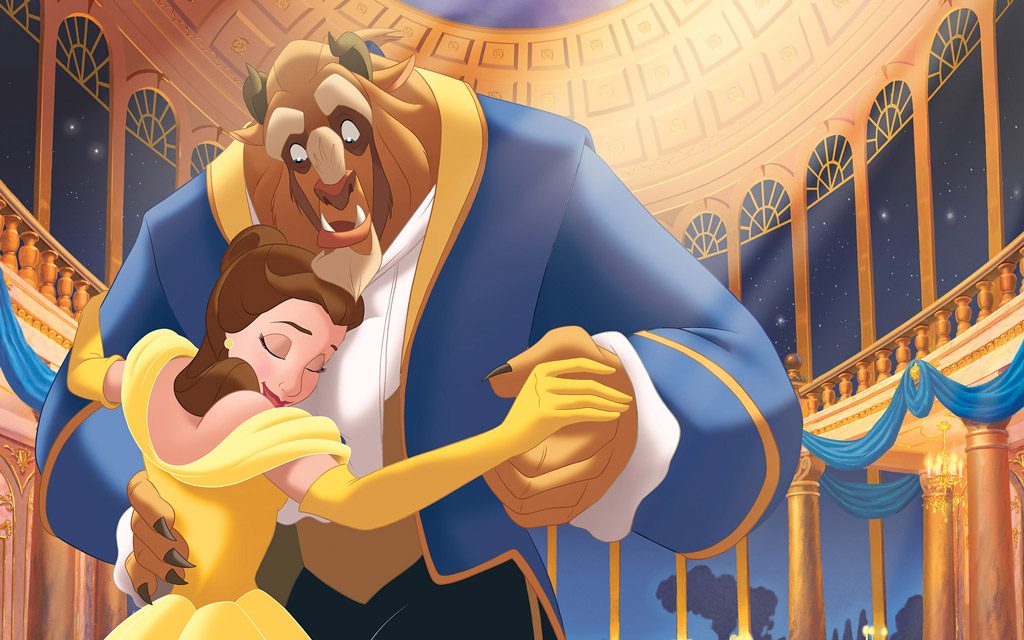 E! has published an article comparing an onscreen television couple to Beauty and the Beast. That intrigues you, right?

Then, you should check out Ted Lasso on Apple TV+! Season two just launched, and it’s the feel-good program we all need right now.

Besides, you’ve got a gap in your streaming schedule now that Loki has finished. Fill it with Ted Lasso!