We’ve got a touching story for your Sunday morning!

Spider-Man had a meeting with the Pope at the Vatican this week. Though the images were about to share with you may seem a bit odd, its actually in honor of a good Samaritan! 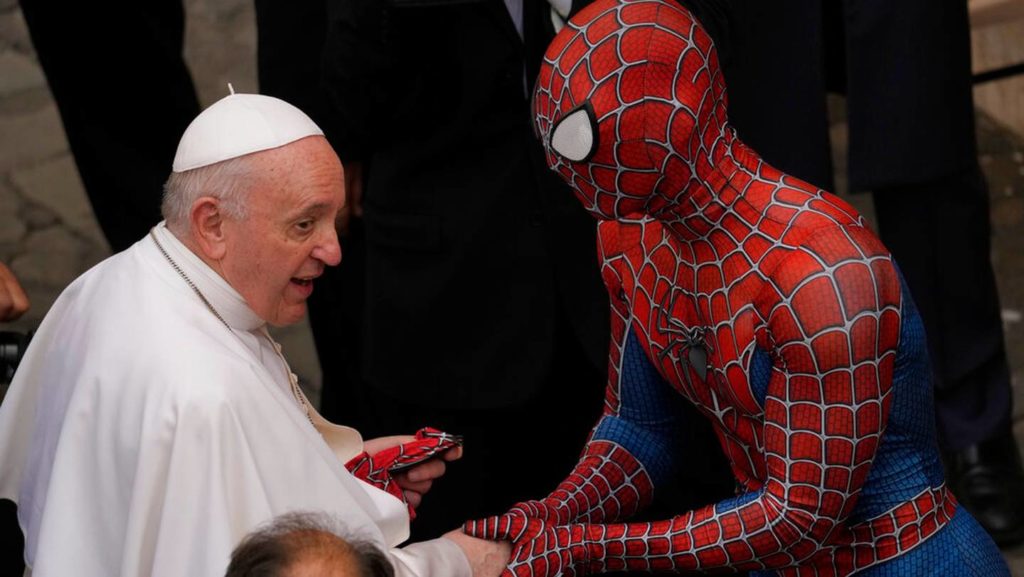 Pope meets Spider-Man Pope Francis meets Spider-Man, who presents him with his mask, at the end of his weekly general audience with a limited number of faithful in the San Damaso Courtyard at the Vatican, Wednesday, June 23, 2021. The masked man works with sick children in hospitals. (AP Photo/Andrew Medichini) (Andrew Medichini/AP)

The man behind the suit in this instance is NOT Peter Parker but rather Mattia Villardita dressed in full Spidey costume — complete with mask!

He had the rare opportunity to meet Pope Francis on Wednesday n the VIP section of the Vatican’s San Damaso Courtyard.

But before you think this is some wacky Marvel promotion, it was actually to honor Villardita was actually given the seat of honor because he dresses up as Spider-Man and visits sick children.  He also recruits his friends to dress as superheroes to assist him in his good deeds.

Villardita told Catholic News Agency that he carries out this work to “alleviate some of the suffering of the hospital patients.”  He does so because he knows where they are coming from. You see Villardita spend 19 years as a patient at Gaslini Pediatric Hospital after he was born with a genetic malformation that required multiple surgeries.

So what did the pop think of the visit? According to Villardita, the Pope advised him to take lots of selfies with the kids in the square!

This isn’t the first time Villardita has been honored for the work he does with sick children.  Last year President Serio Mattarella awarded the 28 year old with the Cavalier of the Order of Merit of the Italian Republic for his heroic duties.

Villardita also kept up his Spider-Man visits even during the pandemic when instead of going inside hospitals he made 1,400 web calls to children!

Readers are encouraged to keep following along with MickeyBlog for further Marvel-related news and updates.

Find articles like this helpful? Then why not consider working with an Authorized Disney Vacation Planner? As an agent with MickeyTravels, I’ll be on hand to assist you with everything from finding your perfect stateroom to helping you plan lots of special touches to make your cruise truly magical. Best of all my services are absolutely FREE. Get in touch at 1.800.801.4025 via email at mroden@mickeytravels.com or follow along on Facebook