Worlds in Motion: A Celebration of the PeopleMover

The PeopleMover is one of my favorite rides at Disney World. It’s a nice break during a long day at the parks. We can never skip it! Continue reading to get a little history on the iconic attraction.

The PeopleMover at Disneyland played a major role in conveying the message of Tomorrowland, a future-focused land all about movement, optimism, and the promise of technology.

In his book Designing Disney: Imagineering and the Art of the Show, Disney Legend John Hench provided an elegant description of this kaleidoscopic place where bright colors, sleek shapes, and whirring technology inspired guests to dream of what could be possible. “In Tomorrowland the view from the Submarine Lagoon was dedicated to action, an orchestration of movement, including the aerial Skyway, the surface-level Autopia, the elevated Monorail and PeopleMover, and the underwater and surface Submarine Voyage. These were all woven into a pattern looping through, around, over, and under each other. The vehicles were streamlined forms with modernistic lines that implied movement. The entire area was staged kinetically to suggest the energy of modern urban life.” 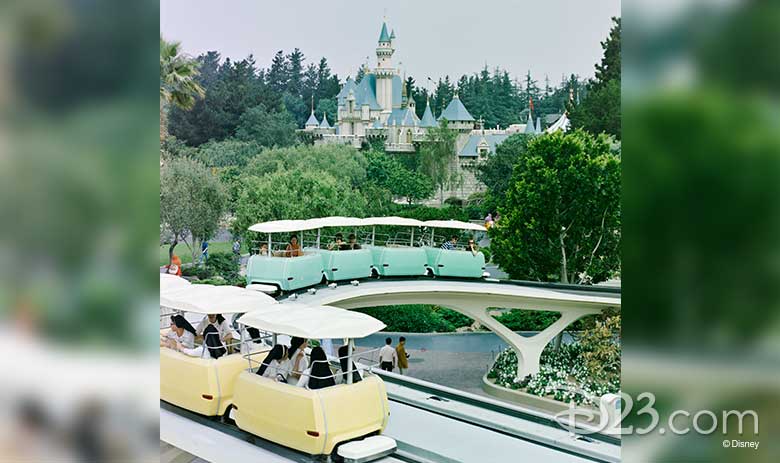 In his book, Hench writes about how Walt discovered the core of his idea for PeopleMover, observing that “transportation as an attraction” had become a pivotal design element. “Walt was always looking for inventive new ways of moving guests around,” Hench wrote. “We discovered the idea for the New York World’s Fair WEDway PeopleMover system while on a business trip to the Ford Motor Company in Detroit. Walt and I were invited to visit the mill where Ford made steel for car bodies. We saw a device for handling steel ingots, masses of glowing red-hot metal. The ingots were moved around on tracks of powered rollers from one area to another while being transformed into sheet steel for making cars. Walt asked, ‘Do you think we could put some kind of seat on that type of conveyor, or some kind of arrangement for people to ride on… do you think this thing would handle it?” I said, ‘Sure, look at the weight carried here. I bet that Roger Broggie would know how to do it.’ Roger devised a platen, a flat metal surface, for the bottom of each guest vehicle to make contact with the powered wheels in the conveyor track. We could check the bed of rollers at night to make sure that they were all working. The system was so simple that it never failed to provide guests with a smooth ride.”

Walt first deployed the basic concept for what would become the PeopleMover at the 1964-’65 New York World’s Fair with his Magic Skyway at the Ford Motor Company’s Wonder Rotunda, where guests could ride through the exhibit in one of Ford’s new convertible automobiles. 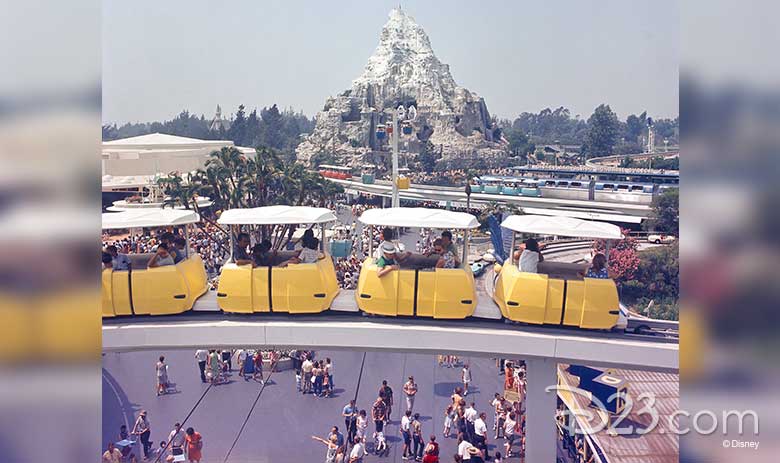 The PeopleMover opened at Disneyland on July 2, 1967. The technology, innovative in 1967, featured electric motor-driven rubber wheels embedded in the track that propelled the vehicles. “The idea of track-mounted propulsion wheels that moved ride vehicles first appeared on the 1959 Disneyland Matterhorn Bobsleds, was then adapted for the Ford Magic Skyway, and finally used as a very practical propulsion method for the PeopleMover,” says former Imagineer and Disney Legend Bob Gurr, who, for nearly 40 years, helped move many a happy Disney theme park guest aboard vehicles and ride conveyances of his own design. “While the technical details varied, the basic scheme was the same.”

From the beginning, the emphasis was not only on moving guests from one place to another, but to contribute to a sense of non-stop movement for guests watching from the ground—while affording passengers a bird’s-eye view of surrounding attractions. “In the same manner as the Disneyland Railroad becoming wildly popular as a trip through a ‘new land,’ where one could get a glimpse of exciting attractions to explore after their trip, the PeopleMover would do the same,” Gurr adds. “From an elevated guideway, one could ‘preview’ an array of enticing futuristic places to visit. Walt also envisioned that a PeopleMover could do the same for other venues, such as shopping centers, expositions, and wild animal parks.”

“In designing Tomorrowland,” Hench says in Designing Disney, “Imagineers considered the track layouts and structures to be as much design elements as the vehicles, and intended them to convey the same meaning. On the PeopleMover, the structural forms are designed to support physical forms in motion. The cantilevered and curved track and the winding curves in the structural elements create continuous eye movement for guests, because the eye interprets line as the record of action. The shapes are organic, with softened and tense edges that look like muscles, expressing movement. The streamlined look was efﬁcient, but also beautiful. Normally, it would have been easier to design boxed, right-angle columns; we opted for equally strong curvilinear structures supporting delicate, futuristic-looking roadbeds.” 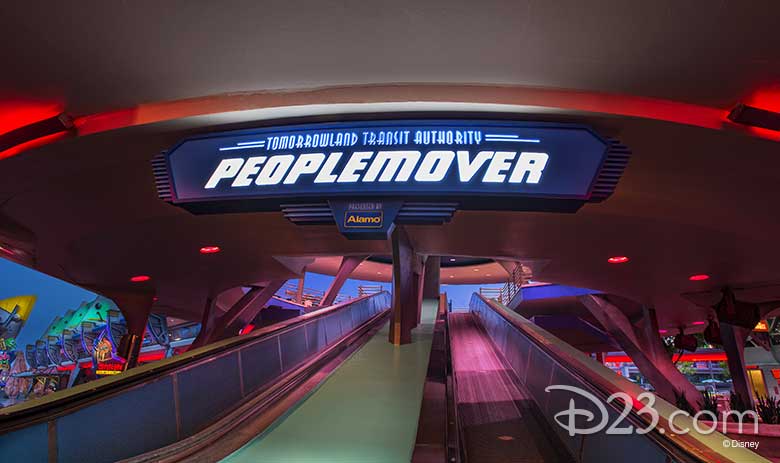 Further proof, as if any is needed, of the visionary nature of Walt’s imagination, is the below-ground subway system at George Bush Intercontinental Airport in Houston, Texas. The system, which was built by Walt Disney Imagineering’s WED Transportation Systems in 1981, provides efficient transportation between terminals and the Marriott Hotel, operates in a circuit, and total round-trip time is approximately 18 minutes. The unique Subway train is the only WEDway PeopleMover built by The Walt Disney Company outside of a Disney property. It uses much of the same mechanical technology employed by the Tomorrowland Transit Authority PeopleMover at Walt Disney World.

“Speaking for myself historically, I seriously valued its ‘not-too far-out’ conservative attraction configuration,” Gurr observes. “One that might be a bit mundane, but very reliable. I’ve discovered this fact many times over as more state-of-the-art attractions encountered difficulties. Having never been a trained engineer, that is my big discovery!”