A New “Frozen Celebration” Coming To Disneyland Paris in January 2020

A New Celebration of the Adventures of Frozen

It seems that the world is in a Frozen frenzy. When we first met Anna and Elsa 2013 they became an immediate global phenomenon and the most successful animation film of all time at the box office. Their adventures  quickly reached Disneyland Paris, and the same will be true for Frozen 2. Fans of every age will be excited to hear that soon they can take part in a brand-new experience all about their favorite Frozen characters at Disneyland Paris, from January 11 to May 3, 2020. During Frozen Celebration at both Disney parks, guests can enjoy an interactive adventure with Anna and Elsa, meet Olaf and watch Frozen characters pass by on a new float.

Anna and Elsa will wear their new outfits as seen by audiences in Frozen 2. A brand-new float will be unveiled for the occasion as it travels on the Parade Route. It will feature the silhouette of the mysterious Nokk, which audiences will have briefly glimpsed in the trailer. Olaf and Anna will be in an ice canoe and Sven will be at the rear of the float in this spectacular voyage inspired by Frozen 2. They will be surrounded by dazzling dancers and accompanied by the new music from the film. 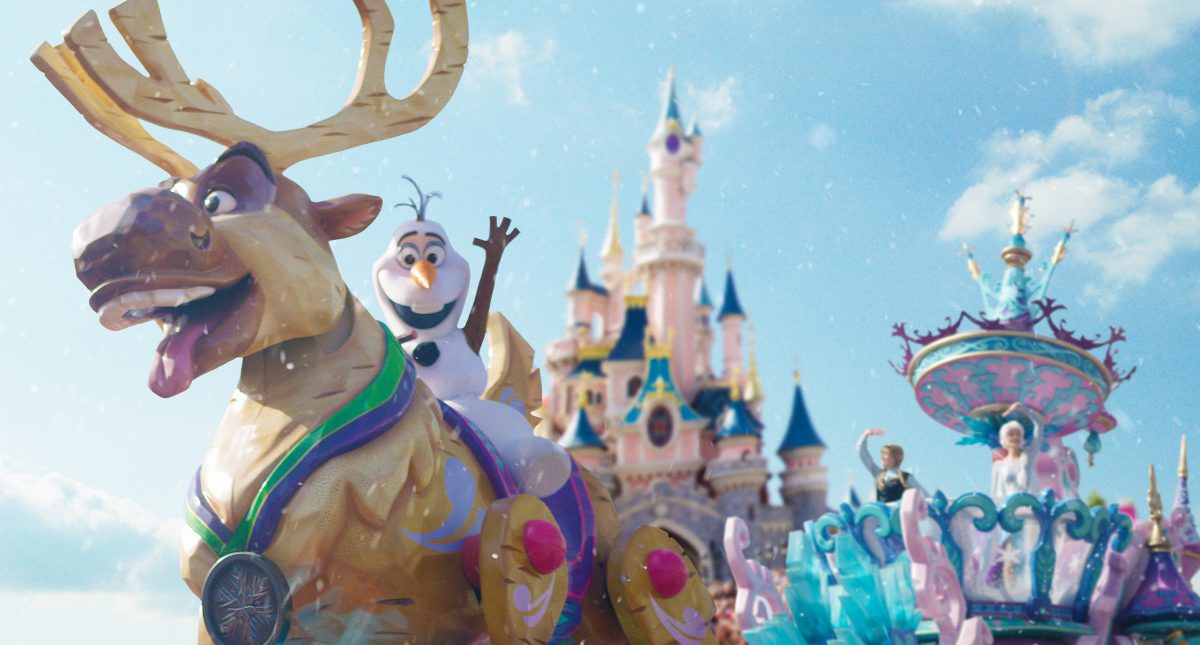 Princess Anna will be delighted to invite the audience to celebrate a major premiere with her: Queen Elsa’s famous ice palace opens to everyone for the first time. But before that, she’ll make sure that everyone learns the magic moves for celebrating her sister’s powers. 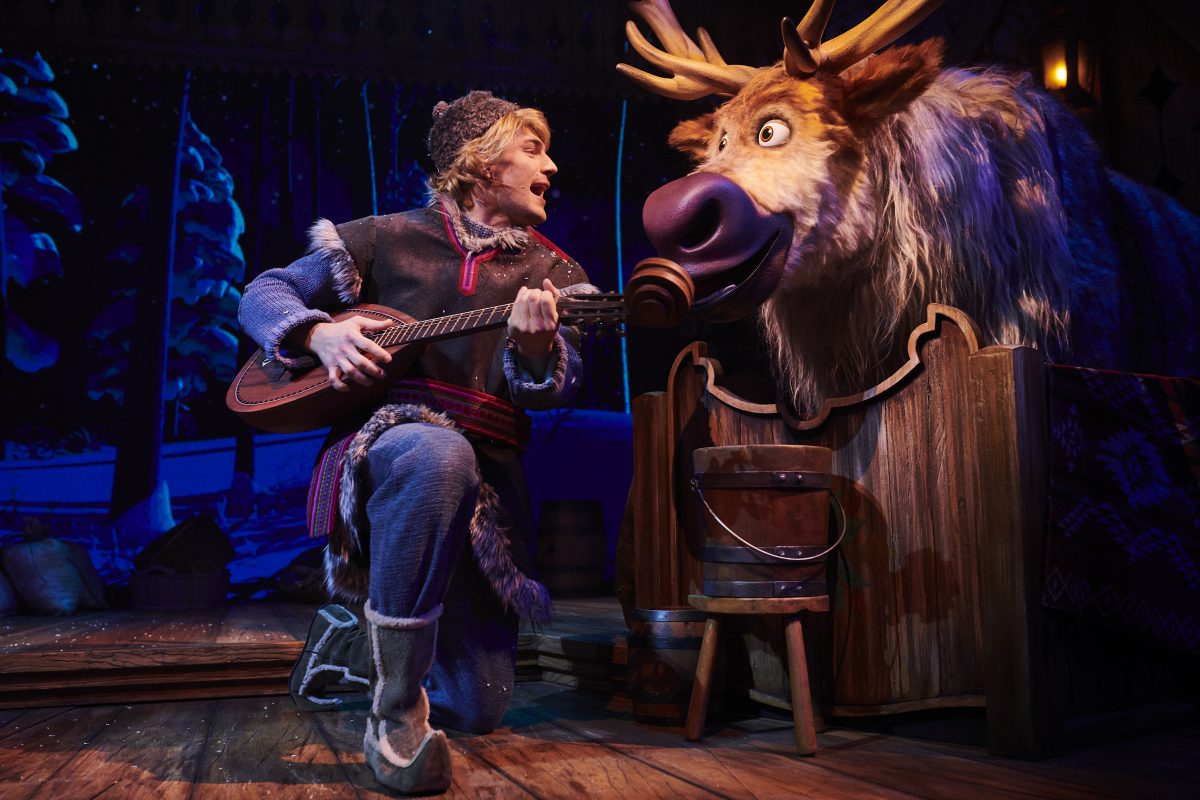 This happens in Kristoff’s barn – with a typically Norwegian decor – where the characters of Frozen and the audience enjoy a bit of interactive fun. And they’ll also get the chance to see Sven the reindeer for the very first time on a stage at Disneyland Paris. Kristoff will even sing “Reindeers Are Better Than People” live. 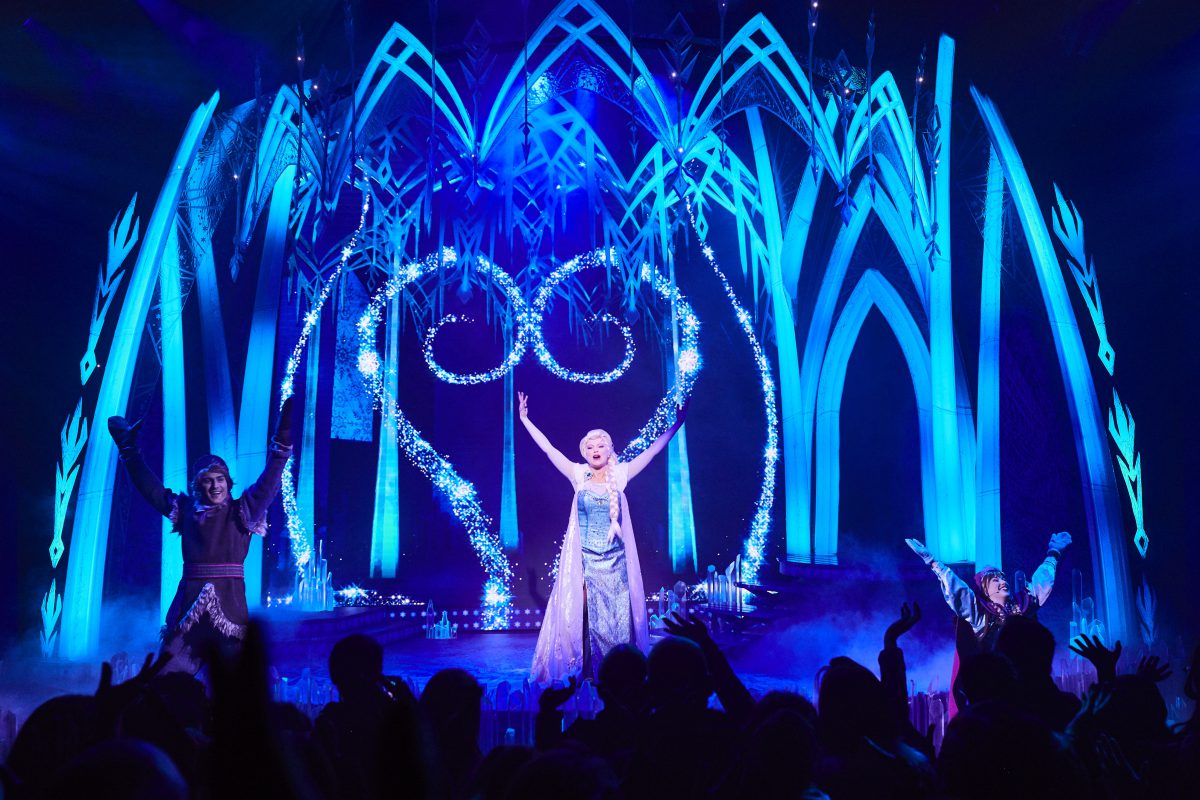 Then comes the big moment when Anna invites adults and children to enter a new space opening directly onto a room in Elsa’s palace. When she sings the show-stopping “Let It Go”, Frozen fans are invited to do the moves they have just learned, demonstrating their love for Elsa and the powers that she was afraid to reveal. This shared moment is marked by the song – always sung live – “Love is an Open Door”. 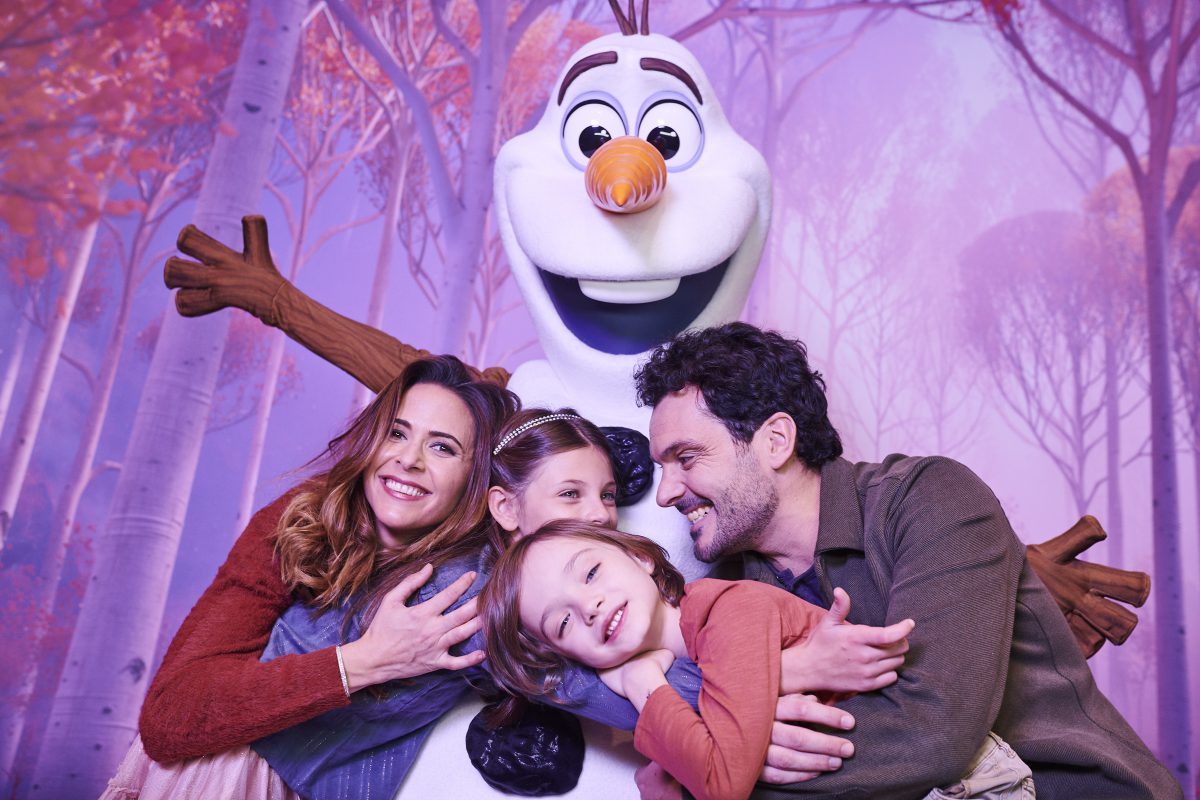 Guests can even meet Olaf at Animation Celebration from November 17, 2019, taking pictures with the adorable snowman from the enchanted forest.

Guests at Walt Disney Studios Park get an exclusive glimpse of the very first images from Frozen 2 from 4 November in Studio Theater. They will see a sneak peek from the new adventures of Anna and Elsa in an immersive environment featuring special effects in a theater all decked out in the colors of the new film.

End the day in spectacular fashion on January 24, 27 and 29, 2020 with “Magic Over Lake Disney *: The Frozen Edition”. The new show is set to make Disneyland Paris sparkle. Head for the shores of Lake Disney to relive amazing, iconic scenes from the Frozen films. 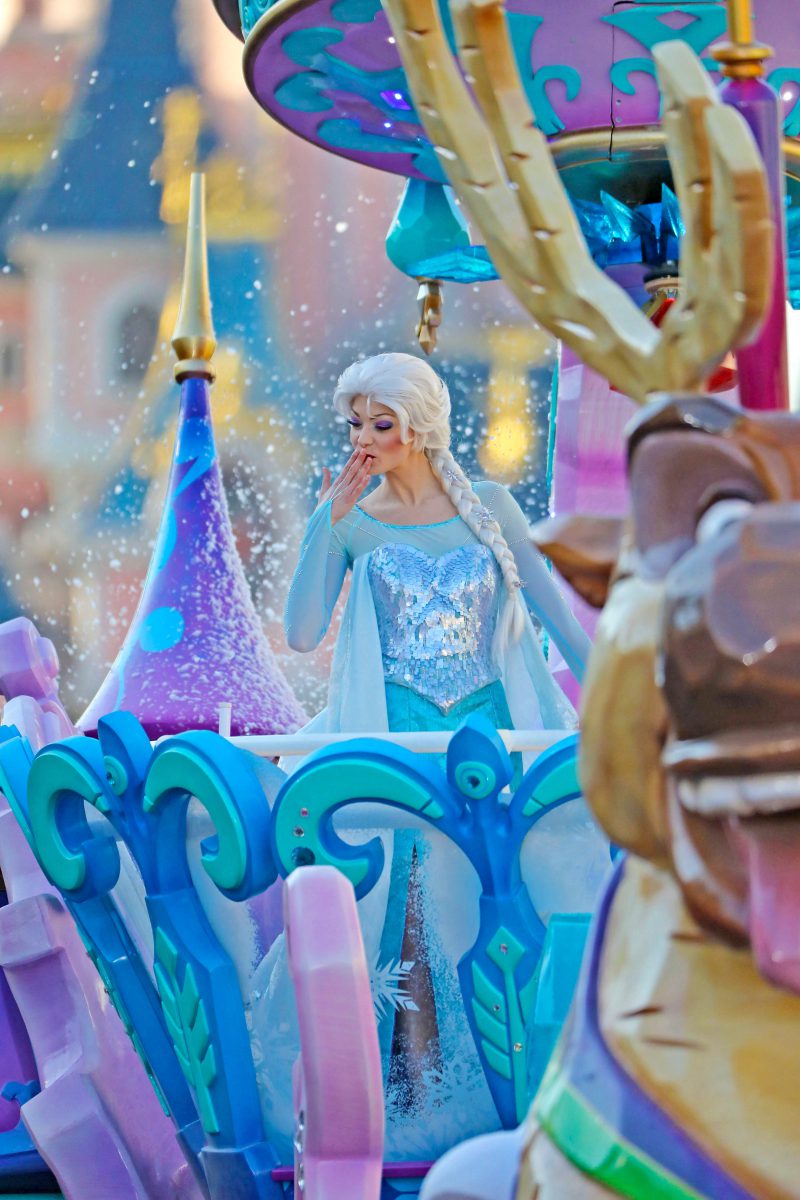 The beloved characters from the realm of Arendelle are celebrated throughout the day during Frozen Celebration. Every day, the famous Disney Stars on Parade ends on a high note with this blast of chilly air. Elsa uses her magic to make it snow as she passes by, with her sister Elsa and Olaf the adorable snowman looking on.

Any perfect day at Disneyland Paris has to include the Disney Illuminations evening show, performed every day when Disneyland Paris closes. The silhouette of Sleeping Beauty Castle becomes the backdrop for an incredible mapping show featuring favorite scenes from the biggest Disney films. Frozen is there too, with no less than two key sequences, including the epic moment when Elsa sings “Let it Go”. And the crowd often sings along together at this exact moment. How could you not be spellbound by it all?

Frozen also headlines in the Mickey and Magician show at Walt Disney Studios Park*. The audience follow Mickey as he learns magic spells from famous Disney Characters and are dazzled by breath-taking special effects. As they travel through this enchanting world of illusion, guests can meet Mickey and characters from Frozen, Aladdin, Cinderella, Beauty and the Beast, and many more as part of a dream Disney experience.

*Available at Walt Disney Studios from February 1 through September 6, 2020

Disneyland Paris is the place where magic is real, but that doesn’t end with the attractions and shows. Shopping and eating out are an important part of the experience! Every effort is made to immerse guests in their favorite films, so they can enjoy the adventure to the full and take back memories that will make the magic last far beyond the bounds of our Disney parks. 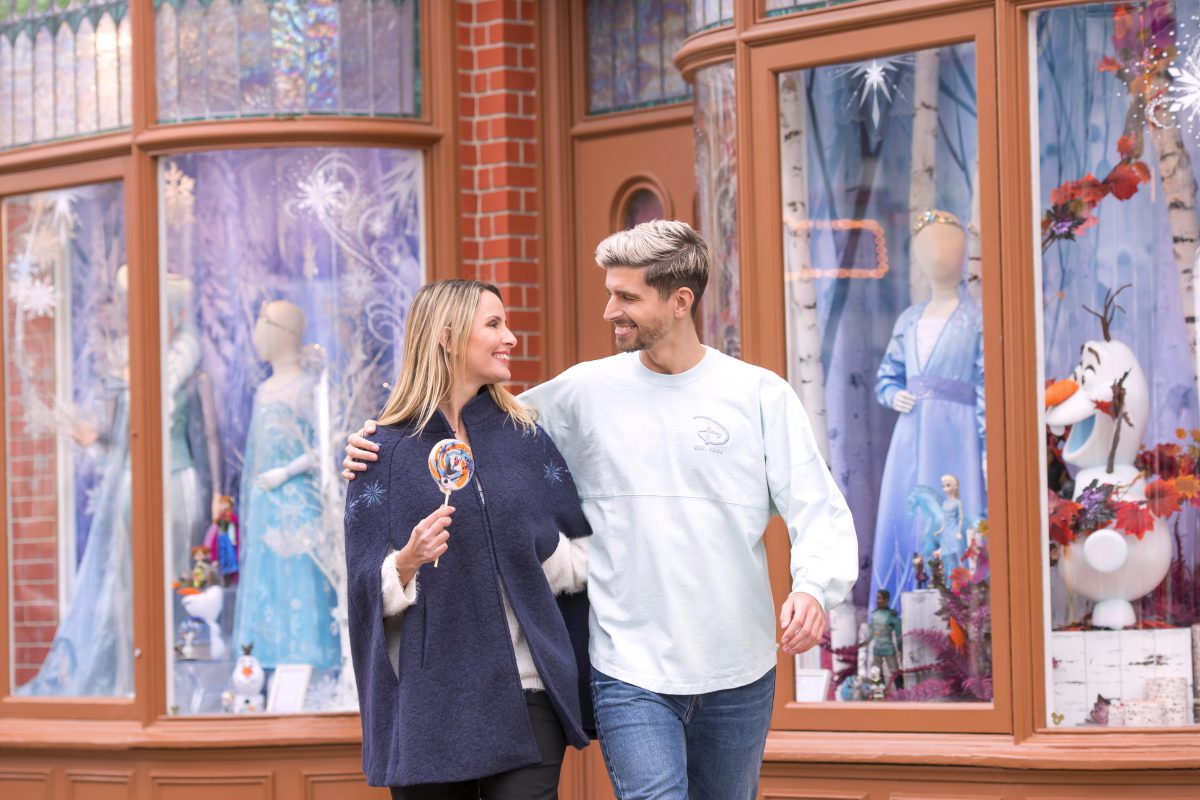 Disneyland Paris is a shopping destination in its own right, with no fewer than 63 stores in all at the Parks, Disney Village and Hotels. Every store tells a story through the architecture, decor and obviously the product ranges on offer.

Disneyland Paris has its own product development chain with product manager and designers. They use their expertise to design a huge number of exclusive creations for the souvenir and lifestyle ranges, allowing everyone to prolong the Disneyland Paris experience by bringing home a souvenir of their visit. 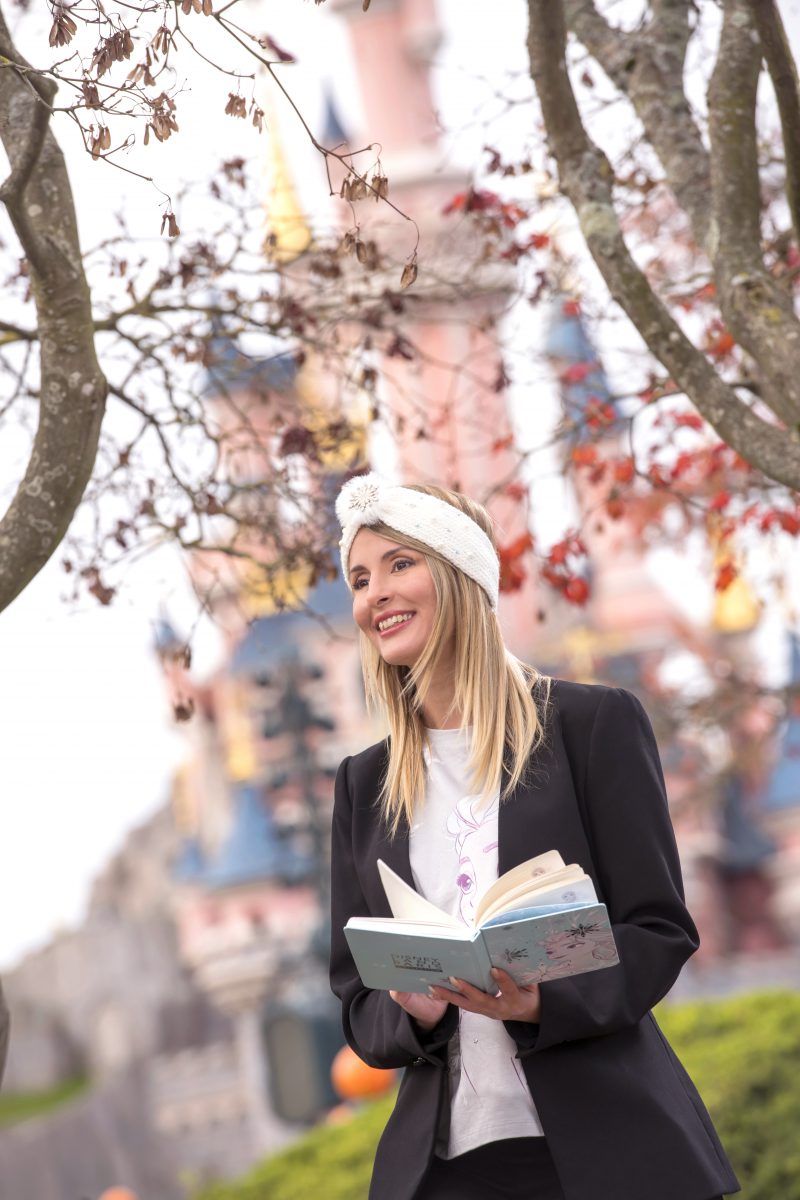 Disneyland Paris has actually created its own Disneyland Paris Collection brand, a fashion and lifestyle brand featuring iconic characters from the world of Disney. We have Tinkerbell and Minnie, followed by Elsa, the Snow Queen, who inspired the latest collection on sale from autumn 2019 and on sale at the Disney Fashion store (Disney Village). It will be available from autumn 2019 from the Disney Fashion store in Disney Village. 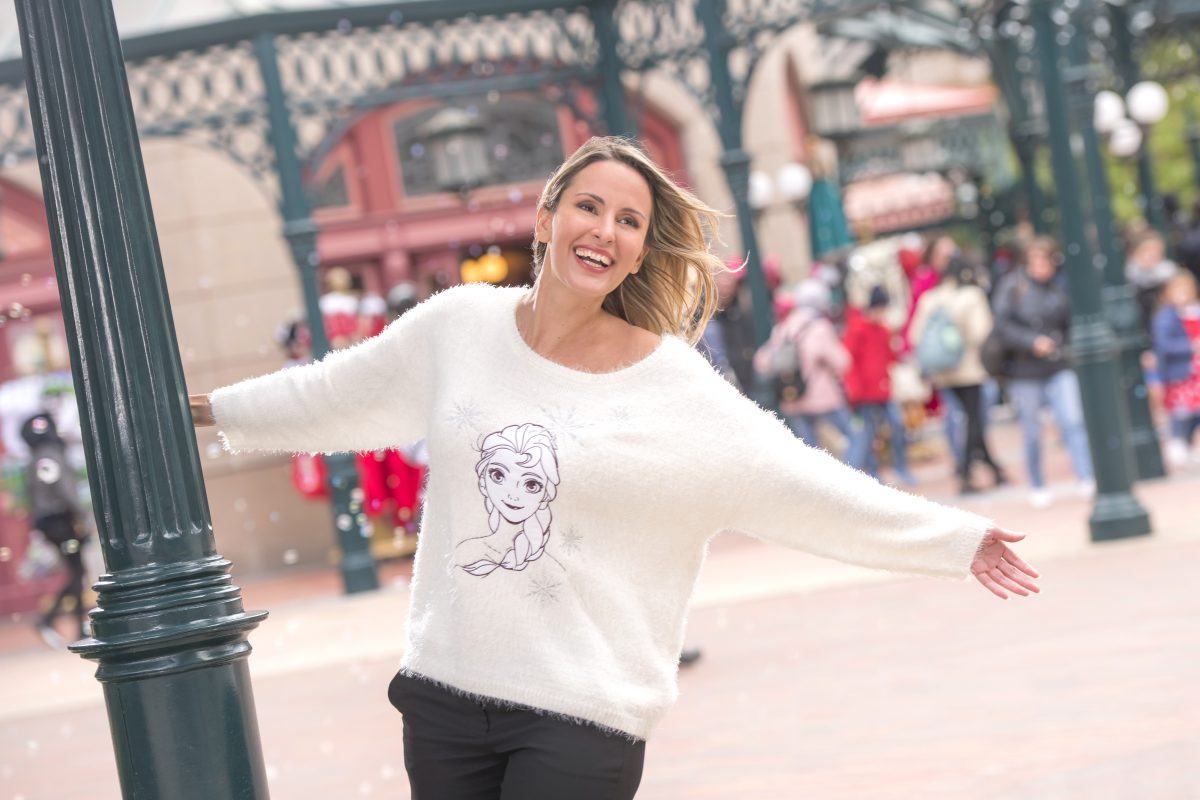 Illustration is central to the collection, showing Elsa in a series of exclusive designs on cloaks, gloves, jumpers, t-shirts, crop-tops and skirts. There is also a series of accessories so that fans of Frozen can prolong the adventure with a whole range of stylish and magical items.

The Disneyland Paris shopping experience continues at shopDisney.co.uk, the digital shop window of the world of Disney.

Frozen Celebration is coming to the restaurants at Disneyland Paris – all in the cause of entertainment. Hence the coining of the term “EATertainment”. The pastry and kitchen chefs at Disneyland Paris have put all their creativity and expertise together to create delicious specialities for adults and children.

Frozen will be part of the EATertainment offering at Disneyland Paris with a delicious new range full of fun available from 11 January 2020. Further details will be posted at disneylandparis-news.com/en/