I remember this so well. And for those of us in the Northeast, possibly having a Disney theme park within driving distance was a dream come true.

Also, for a history buff like me, having a park steeped in Americana — and a short trip away from Washington, DC — would have been amazing.

Also amazing is a recent article from Popular Mechanics about “Disney’s America.”

In November 1993, CEO Michael Eisner announced that Disney would open its third U.S. theme park near the rural town of Haymarket, Virginia. “Disney’s America” would focus on “the nation’s richness of diversity, spirit, and innovation,” said Eisner at the time.

The park would be arranged into nine sections, loosely focusing on significant periods of U.S. history. One land would focus on the founding fathers while others would feature a 20th-century farm, world war battlefields, factories of the industrial revolution. The park would also cover some potentially controversial topics too, like turn-of-the-century immigration, Native Americans, and slavery.

Disney’s new park would be state-of-the-art amusement while mixing in education and sensitivity towards the “painful, disturbing, and agonizing” aspects of American history. Attendees could expect VR technology, innovative motion-simulators, next-generation animatronics, and a nightly ironclad ship battle between the USS Monitor and the CSS Virginia.

But it never happened…

They Pulled The Plug!

But less than a year after the big unveiling, on September 28, 1994, Disney pulled the plug on the project after facing months of intense national and local backlash. Fears ranged from unbearable traffic, the company’s growing power, and Disney’s ability to sensitively portray the complexities of U.S. history…

But just because “Disney’s America” was no more, that didn’t mean all that innovation should be lost to history.


This article is a must-read, mainly because it outlines so many of the great ideas that were poured into the planning of Disney’s America (and has a lot of insight from my friend Jim Hill).

But what’s my favorite idea, you ask? 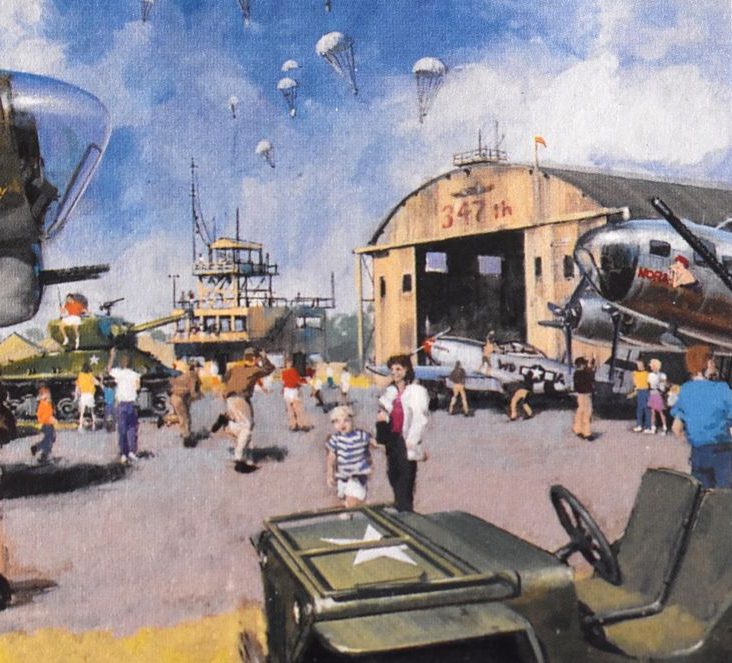 The thought was to use virtual reality systems to create an attraction where visitors could drive a World War II tank, pilot a jet fighter, go through basic training, or even parachute out of an airplane. Motion simulators would also have played a major part, possibly putting riders into their own individual aircraft to give it a more intimate and immersive experience.

This patent, first introduced in the summer of 1993, would have enhanced “the passengers’ sensation of vehicle movement… that is not actually taking place” and could have been part of this attraction.

That, of course, never came to fruition but, in 2001, Soarin’ Over California in California Adventure used some of the same motion simulation and digital projection technology that was being developed for Victory Field.

IN THE COMMENTS: Read the article, and tell us which idea was your favorite of the concepts? Which of the technologies that actually made it to the parks is most important.