It is with sadness I report that one of my favorite events at Disney’s Animal Kingdom has come to an end. The Dance Party at Donald’s Dino Bash in Dinoland quietly ended on Monday, September 23. We found out the news from the Twitter account for the Party Voice of WDNO Radio, Chris Reid.

So, the Dance Party at Donald’s Dino-Bash ended yesterday; another unfortunate entertainment cut at #WDW. I’m SO blessed for the opportunity to have been the Party Voice of WDNO Radio since its inception. I hope you’ll still consider me an honorary Dinoland resident!??❤ pic.twitter.com/NoCeBdyEy0

The cut of the Dance Party at Donald’s Dino Bash is not the only cut to come to Disney’s Animal Kingdom and Disney Parks in recent weeks. We just reported that the popular band, Burukida, who performs in the Harambe Marketplace will end their performances on October 13. There are rumors of other cuts coming in near future as well.

There is no word at this time if Donald’s Dino Bash in Dinoland at Disney’s Animal Kingdom is completely over or if the characters will continue to meet and greet guests as they have for over a year. If you are not familiar with the “Bash,” it features Donald, Goofy, Daisy, and other popular characters dressed up like prehistoric dinosaurs in the Dinoland area. 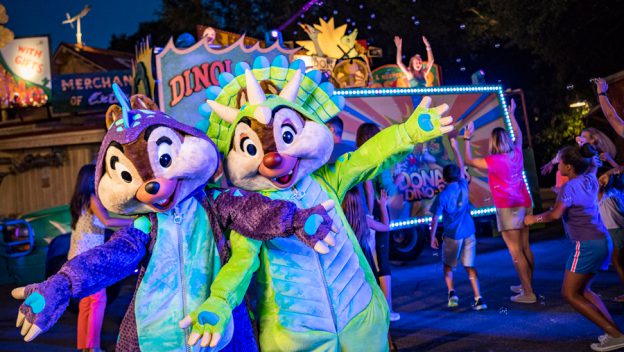 Are you going to miss the Donald’s Dino Bash Dance Party at Disney’s Animal Kingdom like me? Let us know in the comments below!

Planning a visit to Walt Disney World? Fill out the form below or send an email to Holly@MickeyTravels.com for a FREE, no-obligation quote to book your Disney vacation. As an agent with MickeyTravels (a Platinum Earmarked Agency), I will be on hand to help you with everything from finding your perfect package to nabbing those hard-to-get dining and FastPass reservations. I work with all Disney Destinations. Best of all, my services are absolutely FREE. Get in touch via email at Holly@MickeyTravels.com or calling 954.401.9577. Also, make sure to CLICK HERE to follow along with my Facebook page for all things Disney and giveaways!