“I’m dreaming of a white Christmas, just like…” I do each and every Christmas Eve! Cold winters spanning from November (sometimes October) through March, black ice coating roadways, and frigid temperatures dipping into the teens are what winter means to us folks living in the north.

Yes, being from the northeast has its downsides; its proximity to Walt Disney World and Disneyland probably it’s number one flaw! The south and westerners may have bragging rights when it comes to winter weather, part of the reason Walt chose California and Florida as the homes for his theme parks, but there is one small thing that will always keep their — Christmases from being complete: snow! 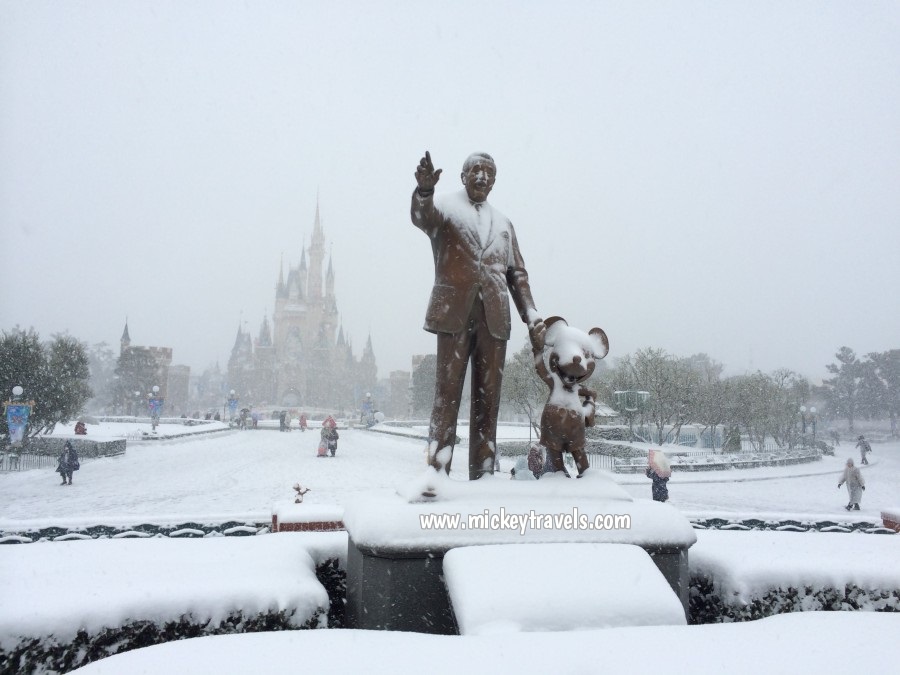 I’m from the city where each December promises dazzling Rockette kicklines and enormous Rockefeller trees, making Christmas a month long celebration for us city-dwellers. But we also get one added bonus that only people from the blustery North can hope for-that elusive flurry of snow on Christmas Eve.

Really, who doesn’t dream of a white Christmas? Well Walt Disney World fully recognizes this dream, and despite the fact that they’re located in a snow-starved Central Florida, the Imagineers made sure that each guest’s holiday spent in the parks would be complete with gingerbread, Santa Claus, and a white Christmas! 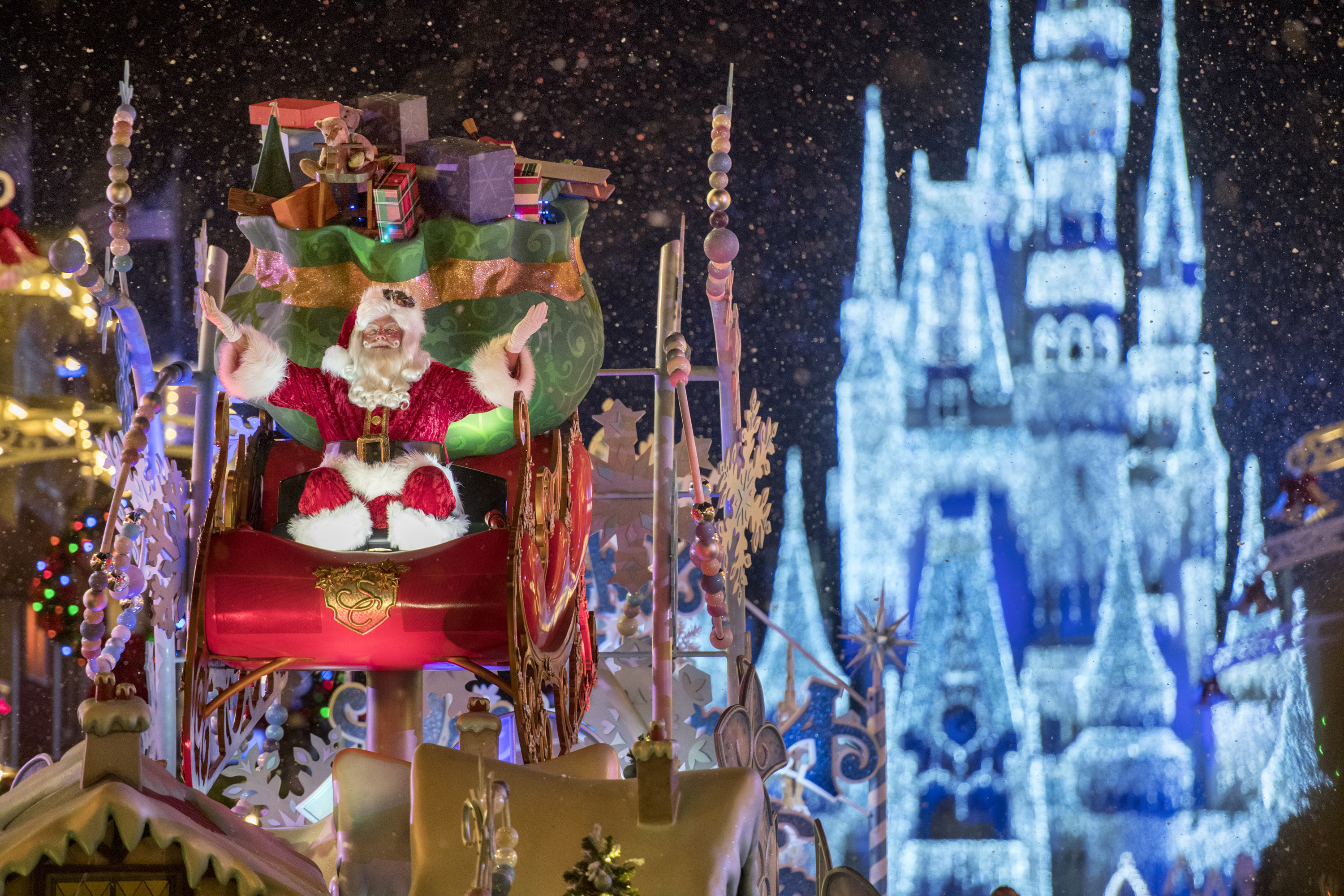 I hope you’ve opted to spend at least one day of your holiday Disney vacation at Hollywood Studios. Although folks tend to be skipping this park in favor of the other due to the ongoing construction, the holiday season is one time of year you should not miss out on this park! 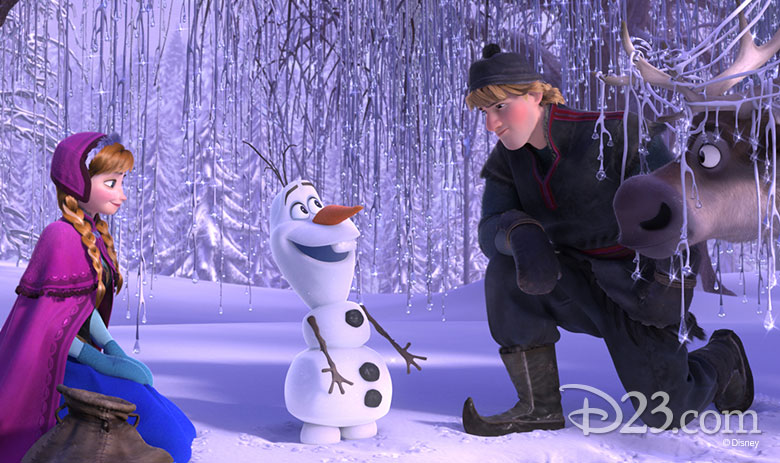 You can find great holiday food and beverage options throughout the park, including some delicious gingerbread creations- new this year (if you want to learn more about this park’s holiday food offerings, check out my article on where you can get the best gingerbread in all of Walt Disney World). While you’re indulging in your seasonal snacks, head over to For the First Time in Forever: A Frozen Sing-Along Celebration. 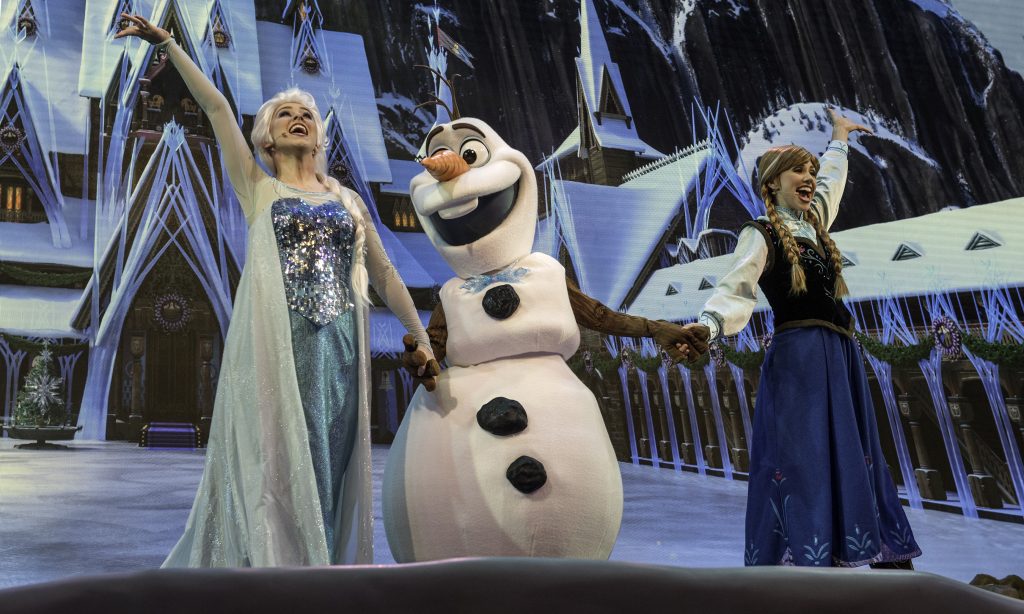 Here, you’ll have the opportunity to sing, dance and be silly with your favorite characters from the hit movie, including those two famous sisters! During the show, snow will gently fall on the audience, making the finale a flurry of snowy fun you won’t want to miss.

This year, they are ‘decking the streets’ of Hollywood Studios with the return of Jingle Bell Jingle BAM!, brand-new projections on the Hollywood Tower Hotel, and Sunset Season’s Greetings. 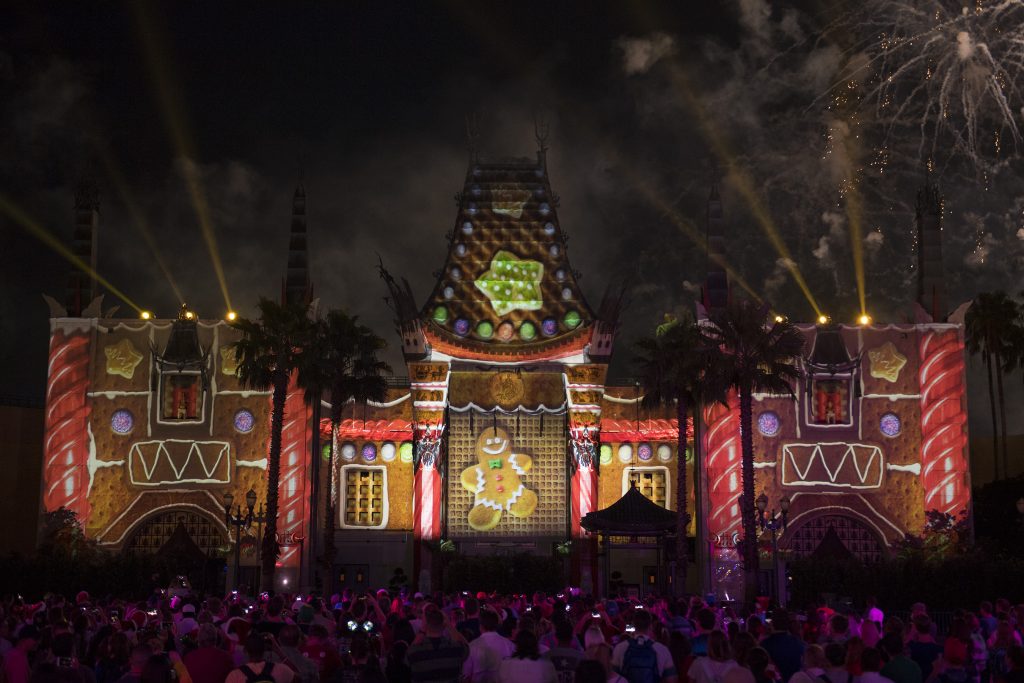 During Jingle Bell, Jingle BAM! you’ll be able to catch a virtual snowflake as scenes play out in front of you on Grauman’s Chinese Theatre. Making a return for another year, this show delights guests with a quirky story and comical characters that will bring merry and bright spirits to every guest in attendance! 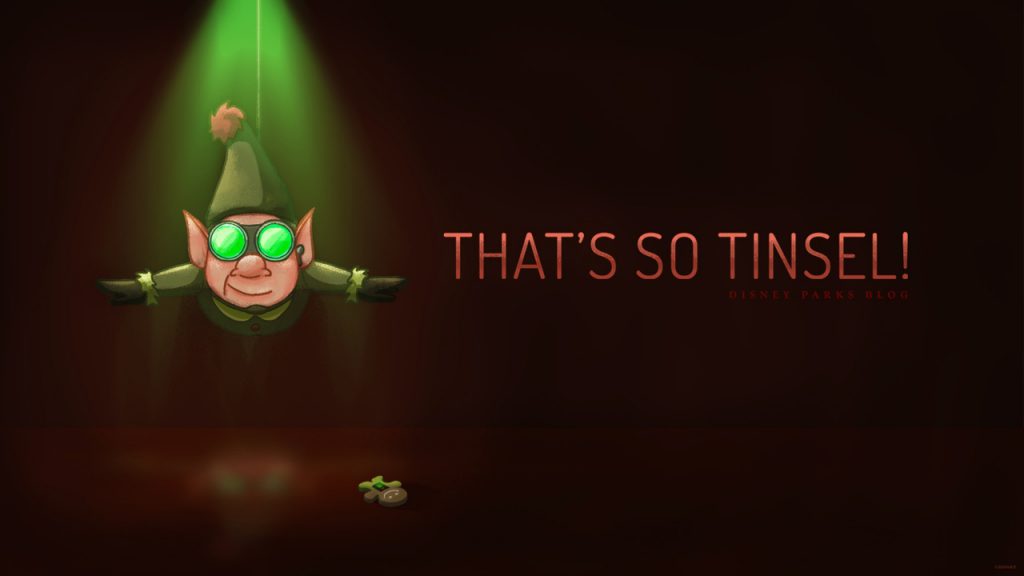 The gang from Toy Story, Olaf from Frozen, and of course, Minnie and Mickey play starring roles in the projection show, playing nightly. As you’re swept up in the stories presented to you using revolutionary digital mapping technology on the Hollywood Tower Hotel, take a just a moment to look elsewhere…and you might just find yourself immersed in a winter wonderland of snow! For the first time ever, it will snow on Sunset Boulevard during the show! 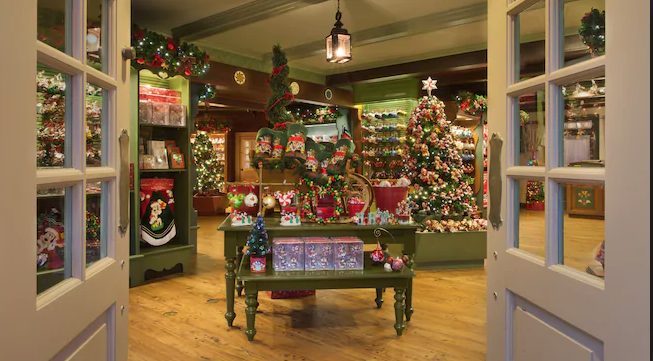 Mickey’s Very Merry Christmas Party is the place for holiday happenings at the Walt Disney World Resort. Get your hands on an ‘invitation’ to the party hosted by the Mouse himself, and I can guarantee you’ll be in for an evening of holiday fun unlike any you’ve ever experienced before!

You’ll be treated to a special parade, complimentary cookies and hot chocolate, event-exclusive merchandise, the castle decked out in all it’s glory, and a showing of Holiday Wishes fireworks spectacular, you’ll leave the party feeling like you just stepped out of the North Pole, Disney style. 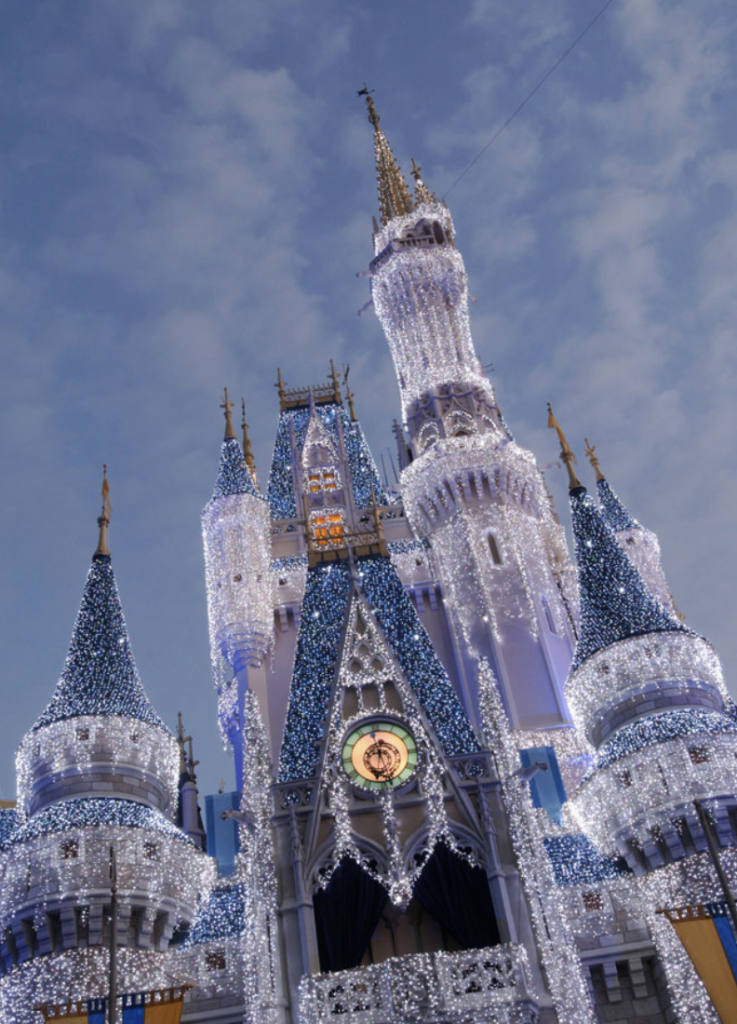 When you’re walking down Main Street USA during the party or staking your spot for the parade- which you should do early– make sure to look to the sky for a special treat! Only party guests will be able to experience it, and it is absolutely stunning. SNOW! Yes, it really, sincerely snows on Main Street USA at Christmastime! Snag a ticket to Mickey’s Very Merry Christmas Party, and you’re sure to catch a flurry of fun at Magic Kingdom Park this holiday season!

A Snowstorm For All Seasons

You can expect nine of 12 months at Walt Disney World Resort to be hotter than hot, and if you find yourself seeking refugee from the blazing sun in mid-August, there are a few places you can see snow whenever you choose to visit 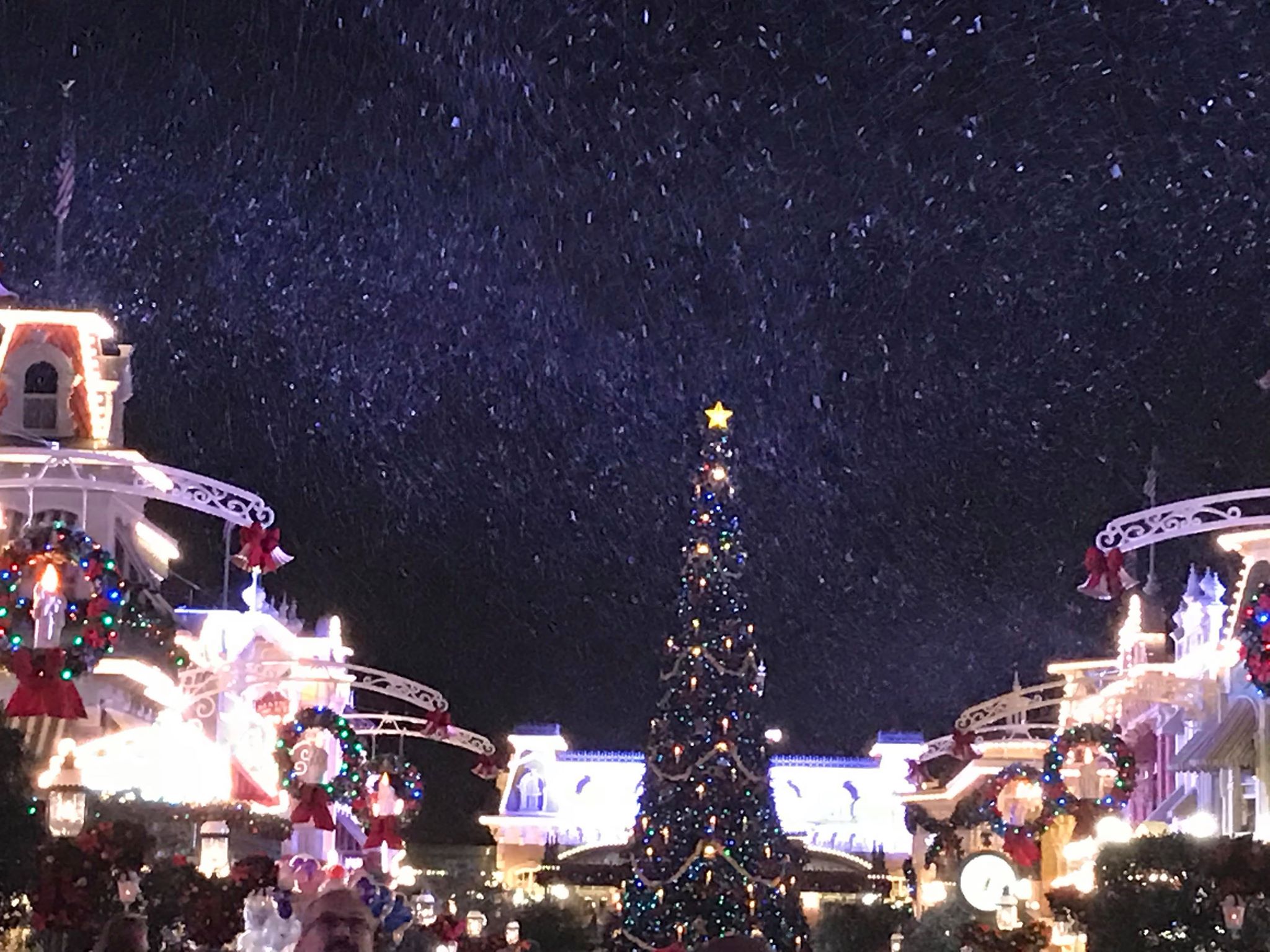 For the First Time In Forever: A Frozen Sing Along Celebration plays year-round at Hollywood Studios, so no matter the season, you can catch a performance and relish in the snowfall as you escape the summertime heat.

Disney has even more on tap for you 365 days a year, straight from Arendelle! Frozen Ever After is a boat ride located in the Norway Pavilion at Epcot. No matter what season you visit, Queen Elsa will supply the snow as you ascend to her ice castle atop the North Mountain! Snowflakes are projected throughout the entire North Mountain scene, which always puts me in the Christmas spirit, even if I’m visiting in March!