“Ralph Breaks the Internet” Coming to DVD and Blu-Ray 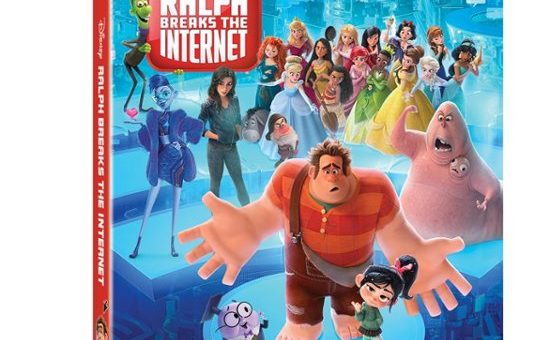 You can finally bring home “Ralph Breaks The Internet“! He hits Digital 4K Ultra HD™ and Movies Anywhere on February 12, and 4K Ultra HD and Blu-ray™ on February 26, 2019.

How We Broke the Internet –Go behind the scenes at Walt Disney Animation Studios to get an in-depth look at how the filmmakers brought a world to life that billions of people visit every day but never actually see – the internet. Take a front-row seat as the team reveals the inspirations for the story and what it took to bring it to the screen. Discover all that went into developing the characters of the film including netizens like KnowsMore as well as characters like Double Dan. See the lengths the team took to create the car chase scenes in Slaughter Race and much, much more.
Surfing for Easter Eggs – Surf the web for the near-countless Easter Eggs, inside jokes and references hidden throughout the movie.
The Music of Ralph Breaks the Internet – Take a look at the music of Ralph Breaks the Internet with appearances by Imagine Dragons, Julia Michaels, Alan Menken, Sarah Silverman and more.
Deleted Scenes – Five deleted scenes with intros from directors Rich Moore and Phil Johnston. Scenes include Into the Internet, Opposites, Domestic Hell, Bubble of One & Recruiting “Grandma.”
BuzzzTube Cats – Many videos were created by the animators to fill the screens of the Internet world…and lots of them are of cats! Check out the BuzzzTube to watch this hilarious cat compilation.
Music Videos – “Zero” by Imagine Dragons and “In This Place” by Julia Michaels.

Baby Drivers – Slaughter Racing School – Take a spin behind the wheel with the artists behind Ralph Breaks the Internet as they go to race car driving school.
DVD:

Music Videos – “Zero” by Imagine Dragons and “In This Place” by Julia Michaels.

“Ralph Breaks the Internet” leaves Litwak’s video arcade behind, venturing into the uncharted, expansive and thrilling world of the internet—which may or may not survive Ralph’s wrecking. Video game bad guy Ralph (voice of John C. Reilly) and fellow misfit Vanellope von Schweetz (voice of Sarah Silverman) must risk it all by traveling to the world wide web in search of a replacement part to save Vanellope’s video game, Sugar Rush.

In way over their heads, Ralph and Vanellope rely on the citizens of the internet—the netizens—to help navigate their way, including a website entrepreneur named Yesss (voice of Taraji P. Henson), who is the head algorithm and the heart and soul of trend-making site “BuzzzTube.”