Photo Tour of the Grand Opening of World of Disney!

My most recent Walt Disney World experience was loaded with tons of exciting ‘firsts’, and even a few ‘lasts’. The firsts on this particular vacation weren’t just first-time experiences for me- like dining at a new restaurant- but were firsts for each and every person lucky enough to be at Disney Springs. With over 100 stores and counting, it’s not too difficult to find a shopping destination at the Springs that you’ve never visited before…but what about a shopping destination that NO ONE has visited? Yes, we were there to take photos on opening day of the newly reimagined World of Disney! You guessed it, I’m talking about the grand re-opening of the store whose absence has been felt for many months. The highly-anticipated reveal of the re-imagined store was the cause of many questions and concerns in the lead up to the grand opening. Why the total departure from the old-style Disney Store look? Will the new layout make for an easier, less-congested shopping experience? Wil the store look more appealing and inviting than the artist renderings? And, most importantly, will the same great merchandise be fully re-stocked, just the way we remember it? All of these questions were answered when the store re-opened on Monday, October 22, 2018. From the outside, things were as-remembered: Life size statues of Cinderella and Aurora framed the west entrance, window displays filled with art and appealing merchandise colorfully attracted the eye, and the Stitch, the biggest troublemaker of them all, sprayed water down onto giggling children. So, far, so OLD, right? Well, one step inside, erased all sense of ‘old’, and that was when I knew a new era of World of Disney was upon us.

The interior design reminded me a whole lot of the Disney Store renovations we’ve seen in malls across the nation in the past decade. Yes, many Disney Stores have closed down, but the ones that fought the trend and stayed in business saw massive remodels that succeeded in updating their overall feel without losing any of that sought-after Disney charm. Big black-and-white banners featuring sketchbook-style art of famed Disney characters greeted guests as they entered, and just three steps inside the doors eased every fear and reservation I had about the new shopping spot. Don’t worry, while life size statues of characters and blatant Disney-themed rooms may be gone, you definitely won’t mistake this place for a Disney merchandise store!

The open floor plan design coupled with the updated, modern racks and hangers for the merchandise made navigation a breeze. The different sections of the store are certainly still apparent, and it’s easier now than ever to find the section you’re looking for and make your way there without having to pass through a labyrinth of rooms. 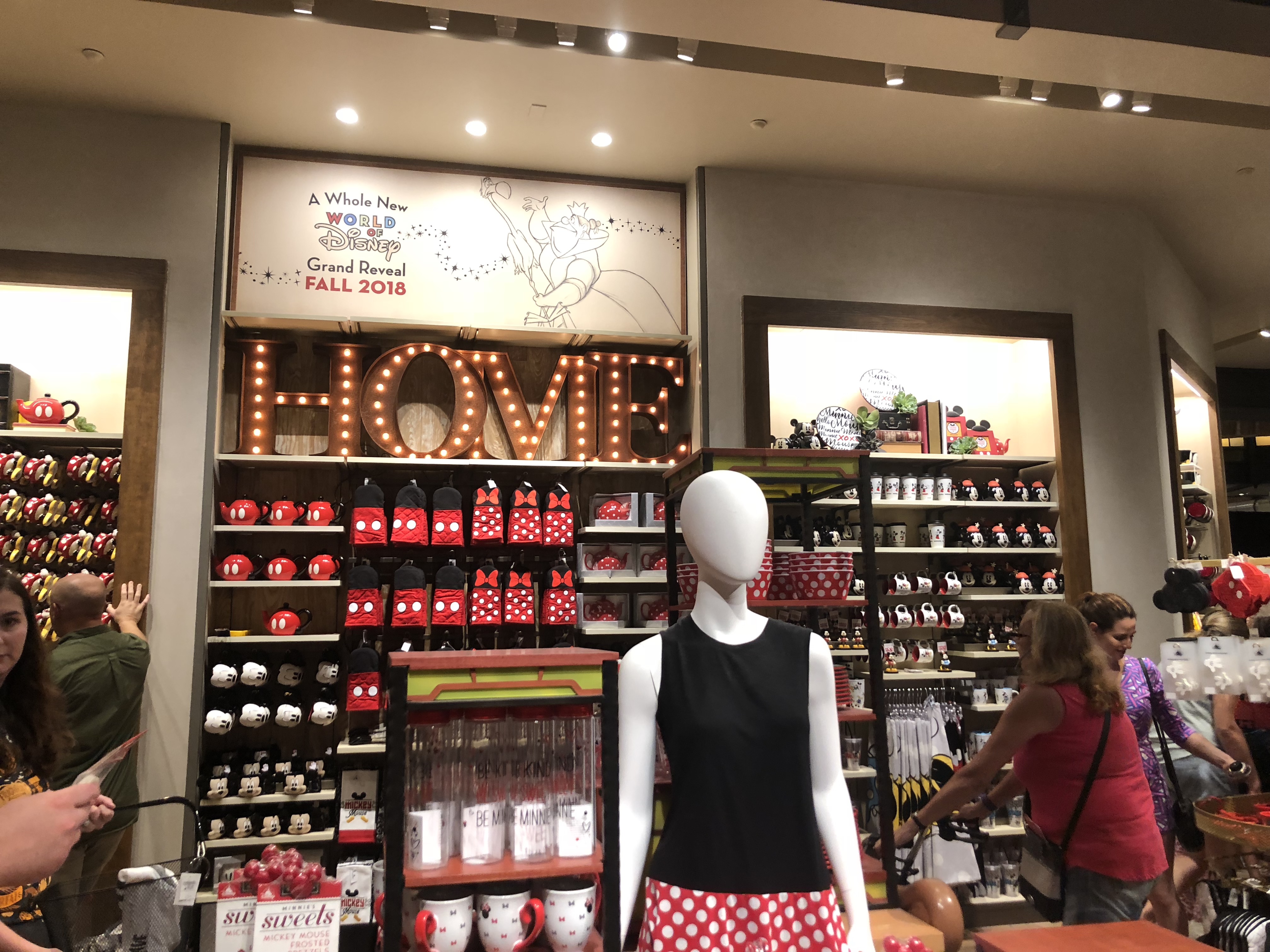 As I’m sure you’ve already noticed, the merchandise is back, baby, and the offerings are more expansive than ever before! The home section is stocked with a mug wall that will succeed at impressing any collector as well as Mickey-shaped cookware suited for any kitchen endeavor. 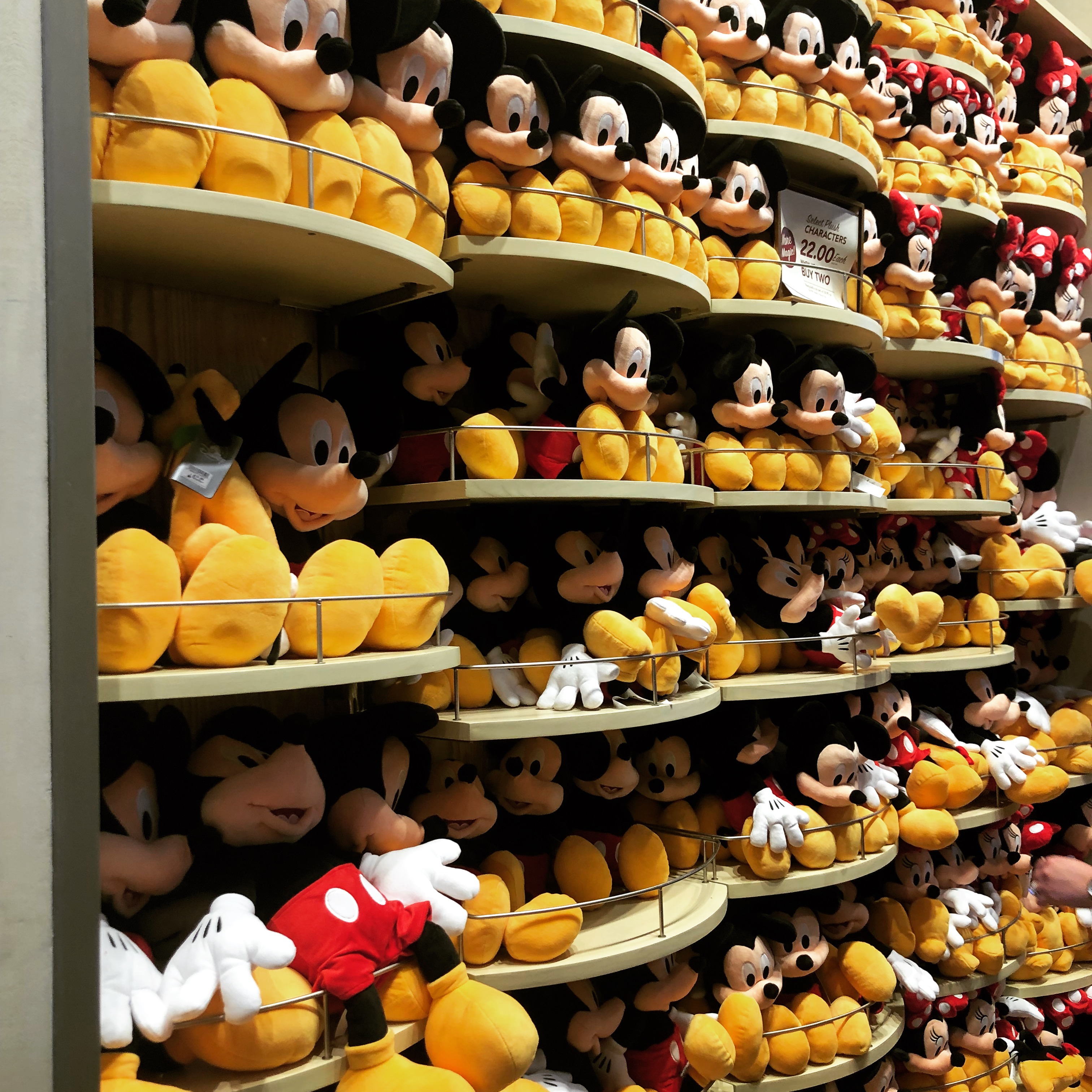 The plush wall layout is one upgrade Disney did not deem necessary- and I could not be more relieved! To mess with such a classic set-up would have been a pity, but like Disney does in all of their endeavors, they know when to upgrade, and when to leave well enough alone. The plush section, like the rest of the store, was designed with minimalism in mind. 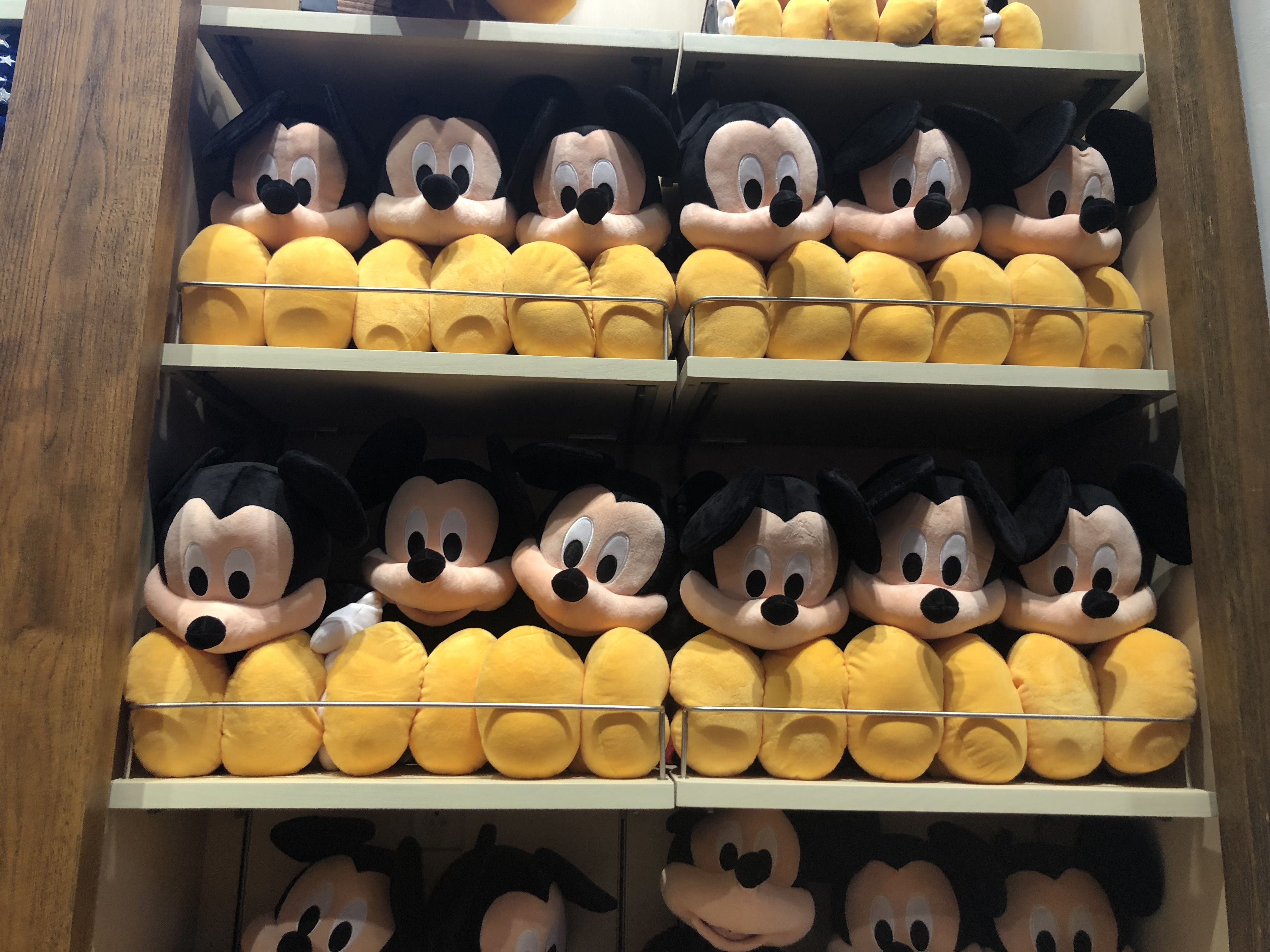 The walls, floor, and ceiling are all painted an understated beige tone which I assumed would not feel ‘Disney’ at all. After seeing the store in-person, I certainly judged prematurely! I think the plain paint color choices and open floor plan better highlight the plush toys- and all of the merchandise- than the World of Disney of olde. 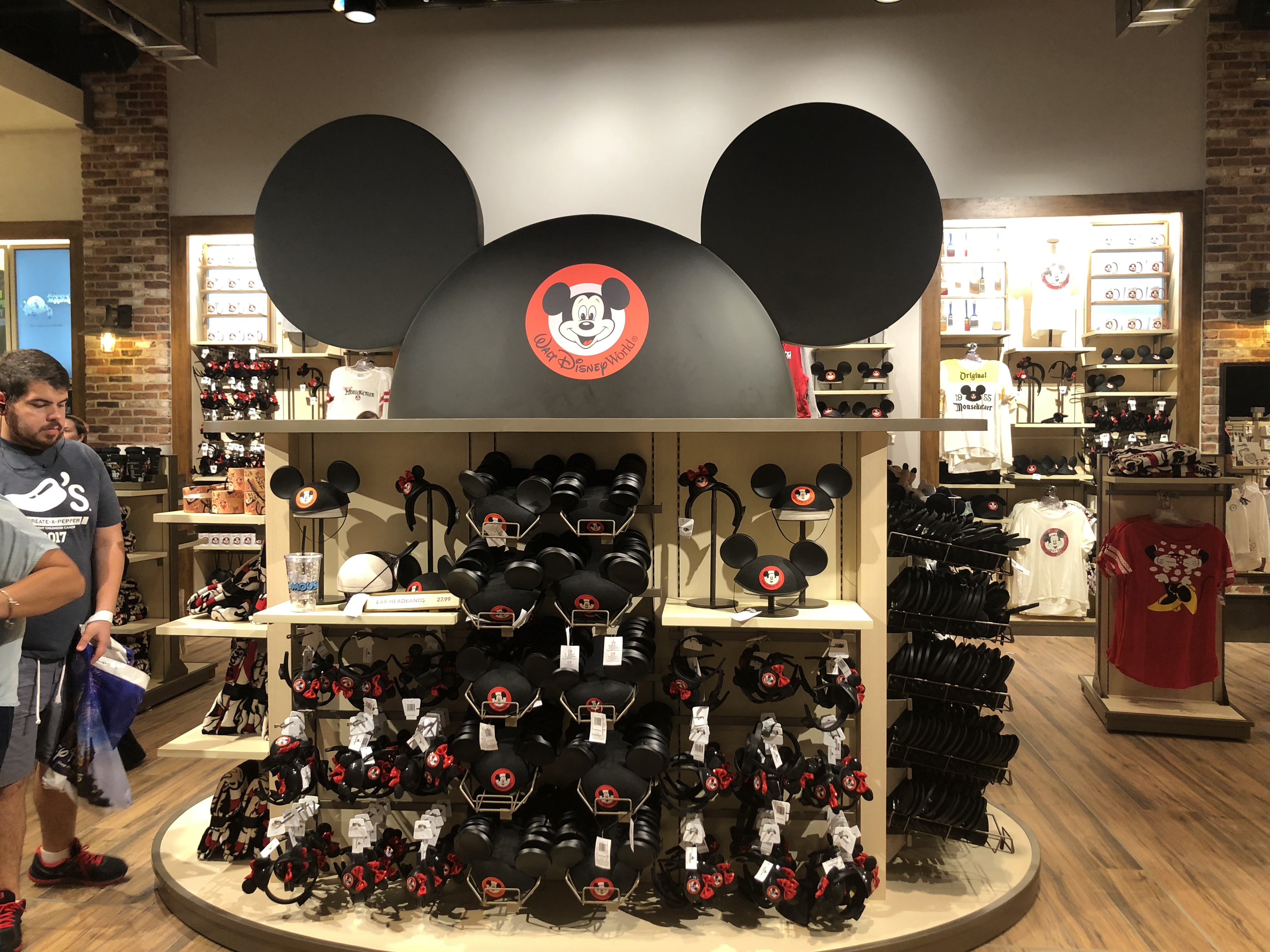 Mickey ear hats. They’re a Disney Parks vacation essential, and World of Disney has created a section dedicated solely to the pair of ears that put the company on the map almost 90 years ago. The ear hats received a brand-new, exclusive shopping section in the store and while the hats are definitely the main draw, pops of other Mickey ear merchandise are on display here too! The day I visited was the first day these Mickey Mouse 90th anniversary ornaments were released, and with so few remaining on the shelves, I was lucky to snap a photo before they sold out! Halloween at Walt Disney World begins in August, so I suppose Christmas’ mid-October start isn’t anything out of the ordinary. Even so, having just attended Mickey’s Not-So-Scary Halloween Party a few days prior, seeing an entire wing of the store stocked with Christmas apparel and decorations seemed a bit premature to me. However, seeing a small portion of the store all decked out in Holiday charm was a great peek at what we can expect from the rest of the store when the Holiday overlays take full effect in November. So, after you’ve checked out these grand opening photos, I want to know what your take on the new store is! Do you plan to visit the new World of Disney on your next vacation? Leave me a comment and let me know!