These facts about the Big Thunder Mountain Railroad are more valuable than gold.

The Story Behind the Mountain

There is a legend about Big Thunder Mountain. The story begins in the little town of Rainbow Ridge in the 1800s, the time of the gold rush. When gold was discovered, miners constructed a rail system to transport the gold. Unbeknownst to the settlers, the mountain was cursed by the spirit of Big Thunder. The spirits caused earthquakes and floods, destroying the mines and causing residents to flee. The town became deserted, until years later, when explorers found trains speeding through the mines, with no passengers inside. Now the railroad is opened for thrill seekers who are willing to ride these possessed carts….At their own risk.

Of course Disney imagineers have incredible attention to detail. The mining equipment and tools you will see around Big Thunder Mountain are actually real antiques. They wanted to create the appearance of a real working mine, similar to old photos found in history books. There’s a hand-driven drill, press gears, picks, shovels and other artifacts from real abandoned mines. There’s even a century old stamp mill!

There are a total of six trains that weave through the tunnels and caverns of the abandoned mine. Each train is given a clever name. Their names are: I.M. Brave, I.B. Hearty, I.M. Fearless., U.B. Bold, U.R. Courageous and U.R. Daring.

Fan of Indiana Jones? Who isn’t? The sounds of the trains from the attraction were recorded and used for the mine cart chase scene in the 1984 film Indiana Jones and the Temple of Doom. Listen carefully next time you ride the ride, you may recognize the sound effects from the movie.

The Founder of Big Thunder

In the waiting area, up in the rafters, there is a portrait of Barnabas T. Bullion, the founder and president of the Big Thunder Mining Company. The man in the image is actually modeled after the Disney Imagineer, Tony Baxter. He was one of the Imagineers responsible for creating the attraction. What an amazing way to honor someone and their work. 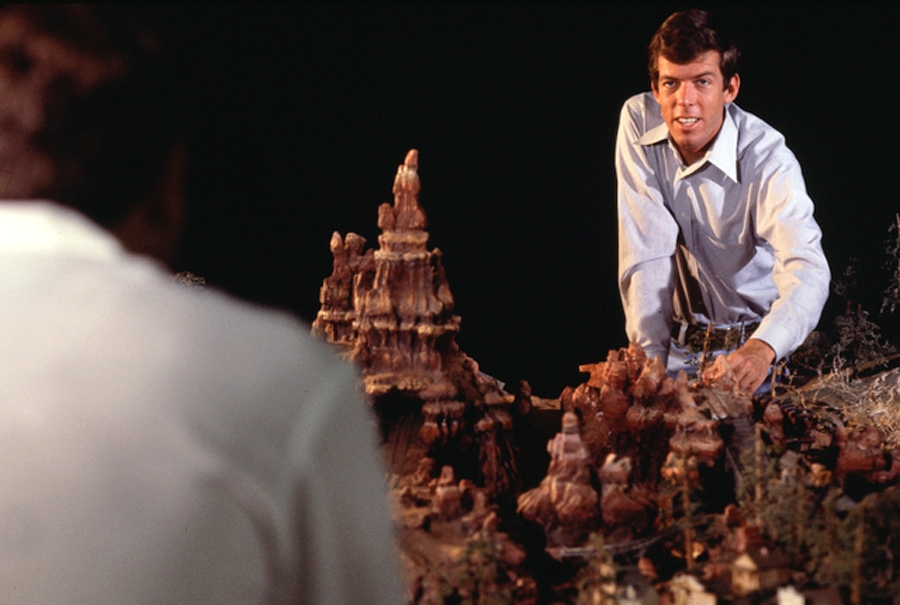 Remnants of Past Attraction

From 1960 to 1977, Frontierland was home to the Mine Train through Nature’s Wonderland, a leisure ride that explored the old west.  As a way to remember the history of Disneyland, remnants of past attractions can be found throughout the ride today. Tunnels that were once used for the Mine Train still remain but are now boarded up. The colorful caverns at the beginning of the ride, with stalactites and dripping water that make rainbow splashes, are also a nod to the attraction. Near the exit, there is an animatronic fish in the water that was also used in the original ride.

Want to find those hidden Mickeys? Keep an eye out Cacti; some of them are shaped like Mickey’s Head. Another spot you should be on the lookout for is on the first hill of the ride. There are three large gears that make an upside down Mickey head.

Those were some wild facts about Disney’s Big Thunder Mountain Railroad. Interested in visiting a Disney Park? Our friends at MickeyTravels will help you plan and book your trip for free. Thanks for visiting MickeyBlog! Fill out the form below for a free quote.

My name is Victoria Prisco and I’m a writer from New York. Ever since I was little, I have been completely enchanted by the magic of Disney. And I’m still looking for that rabbit hole to Wonderland.