Our MickeyBlogger is at Disney’s Hollywood Studios today, sampling some festive offerings and bringing you her reviews. Four savory waffle bowls have arrived at Fairfax Fare, just in time for the holidays! 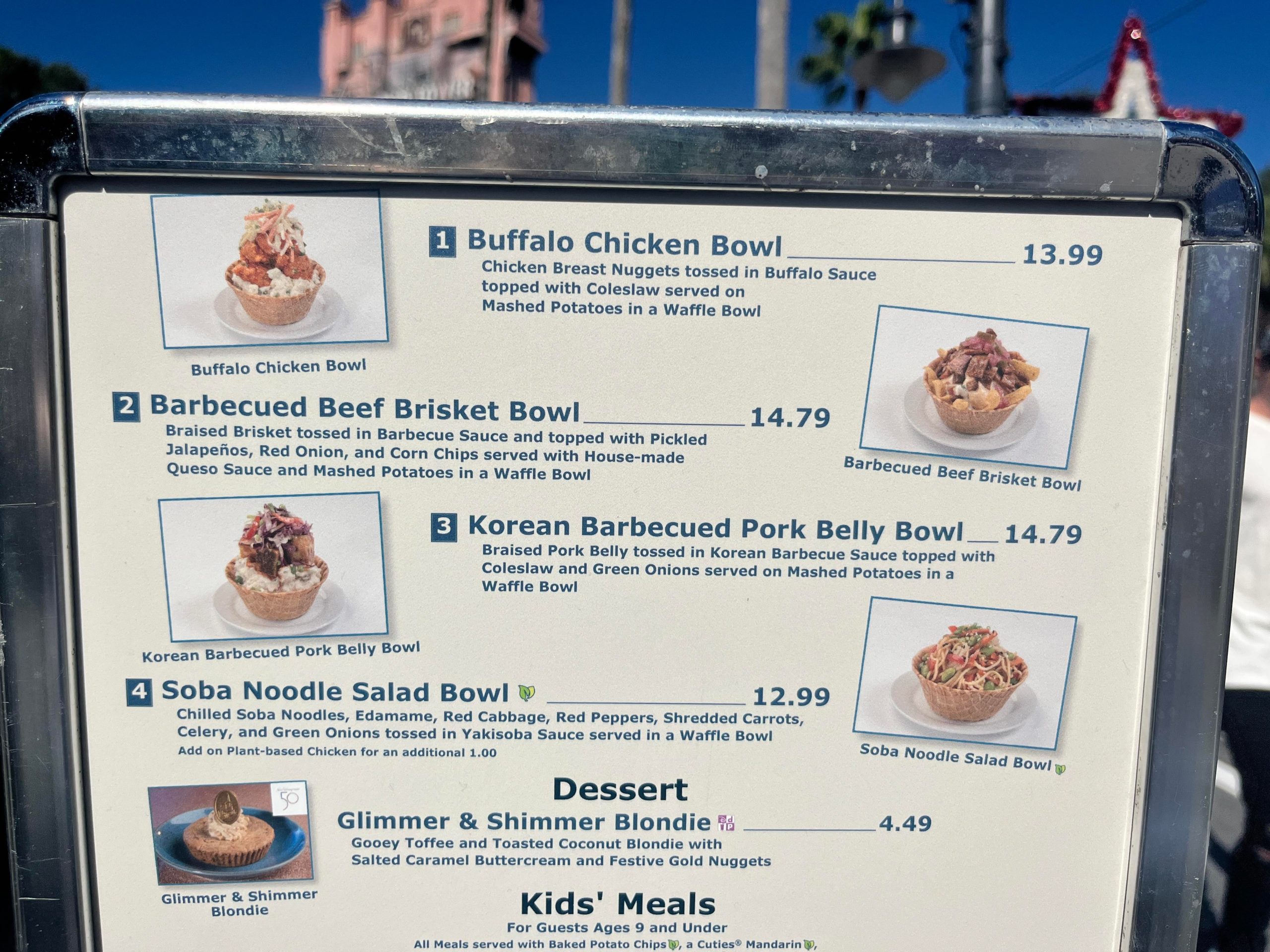 Let’s take a closer look at the items and see how they tasted! Here’s a video of all four, before we sampled them. 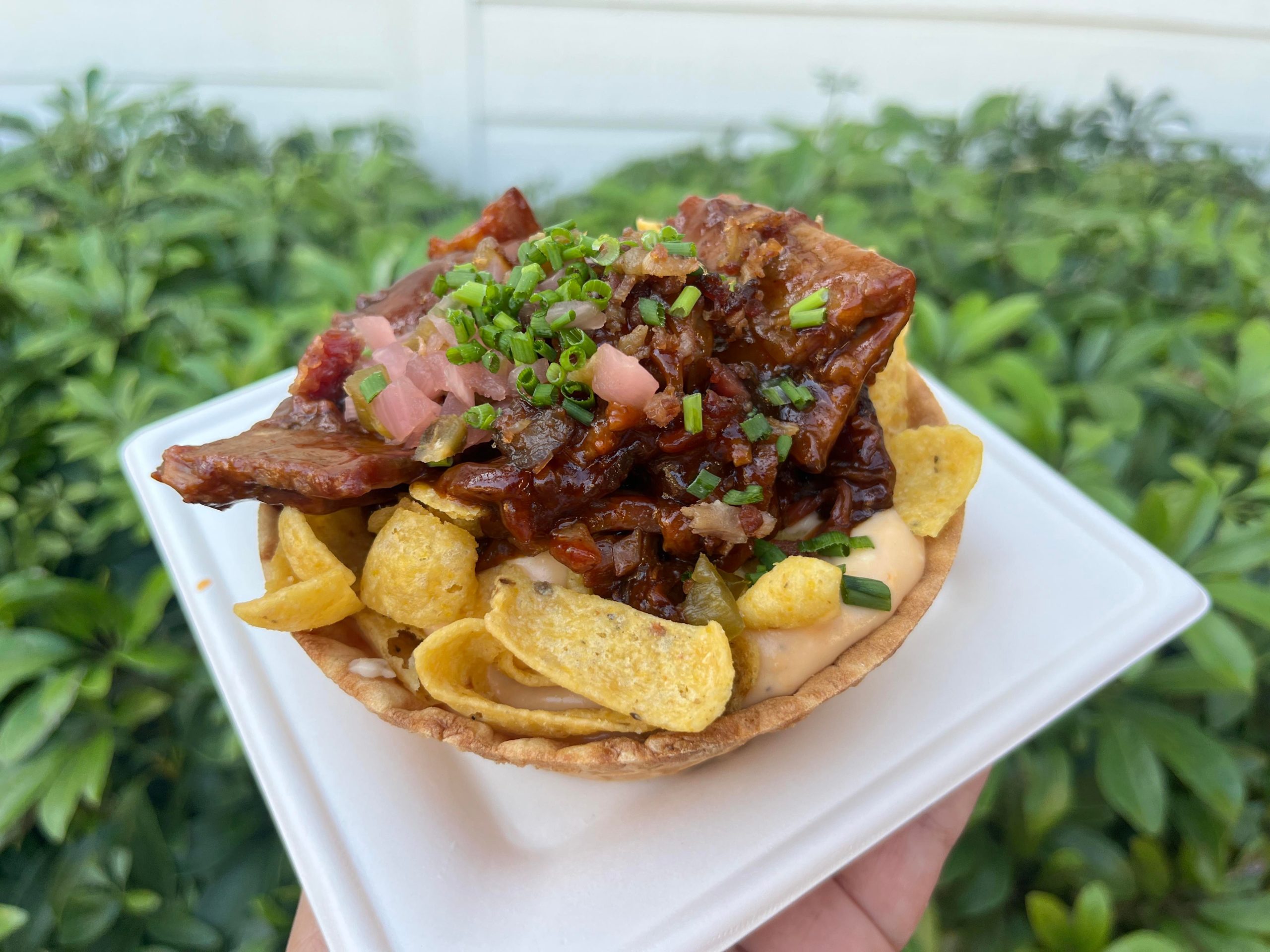 Our MickeyBlogger, Kristen shares that she really liked this offering. Check out her review below! 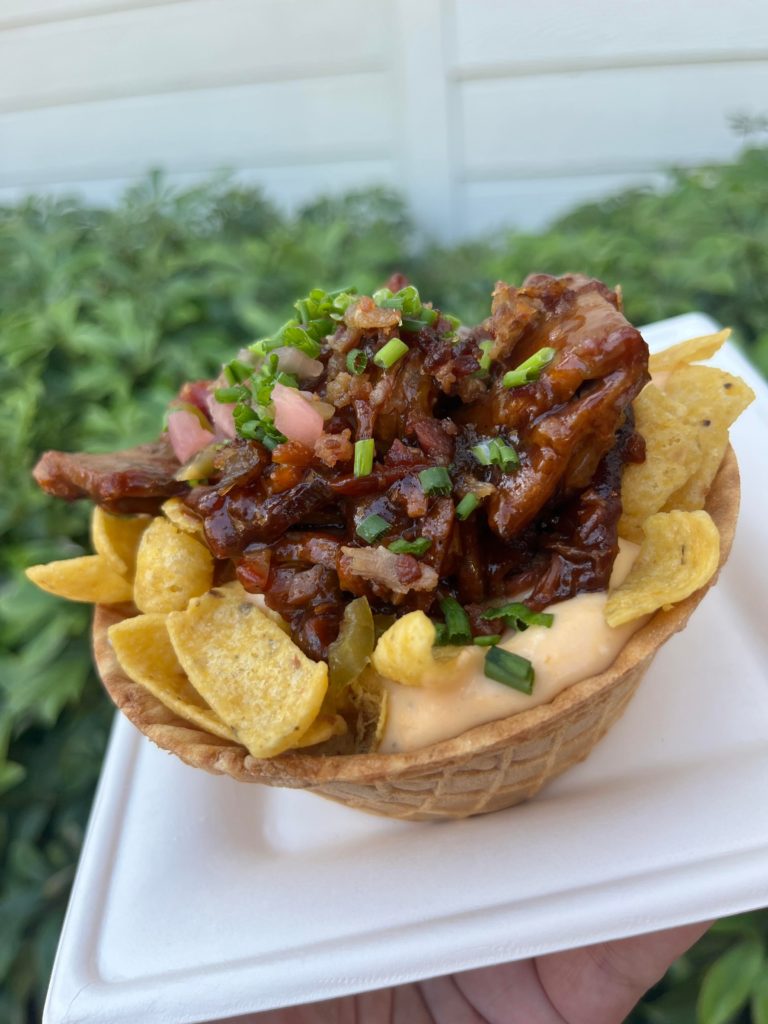 “The portion is small for the price but it’s tender beef brisket on top of mashed potatoes with cheese sauce and chips. The meat could have been a tad more tender, but it has a nice smoky flavor and wasn’t spicy. The mashed potatoes were creamy and blended. The cheese sauce was delicious!” 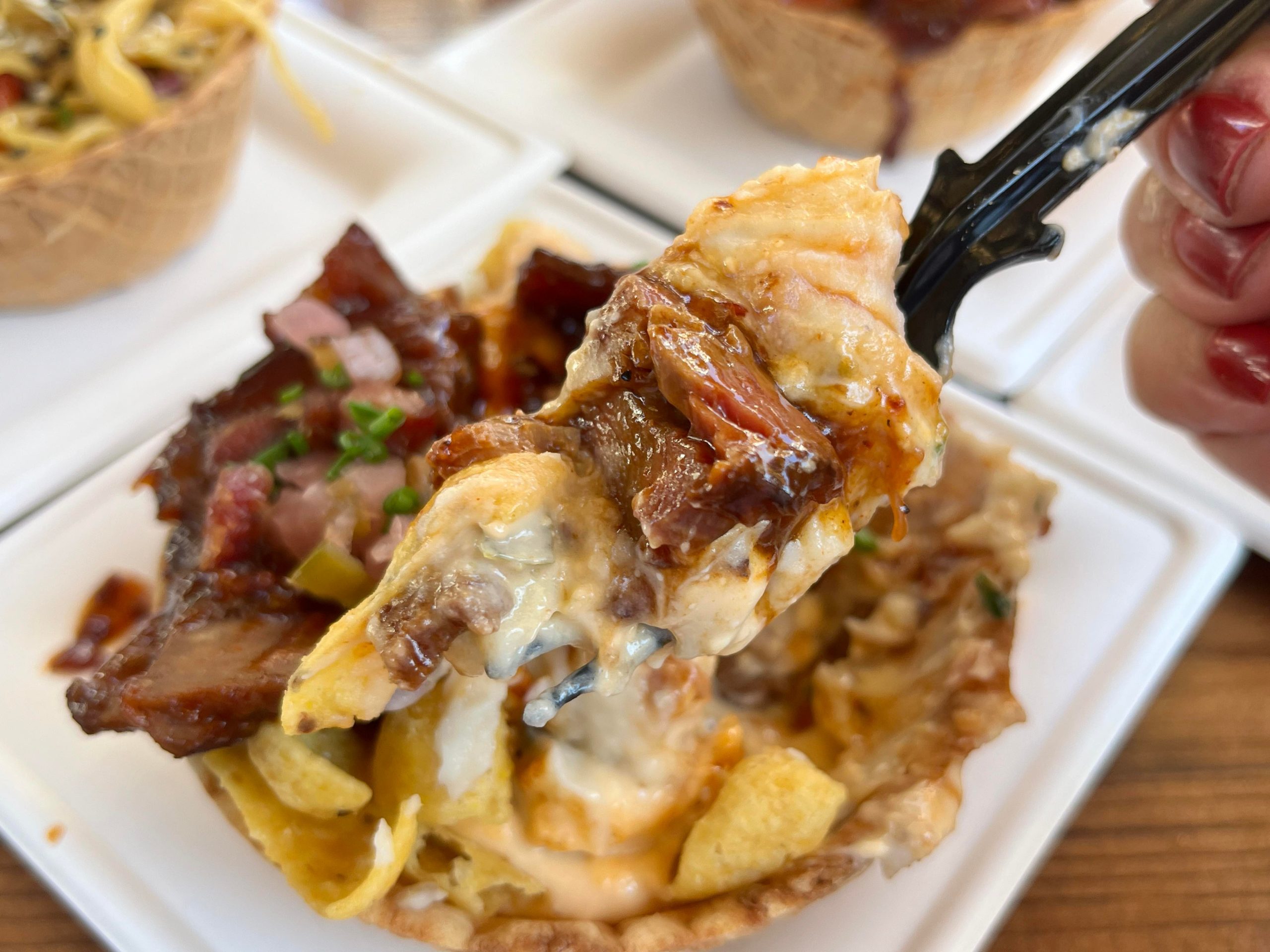 The Buffalo Chicken Bowl includes chicken breast nuggets tossed in buffalo sauce, topped with coleslaw. It is served in a waffle bowl for $13.99. 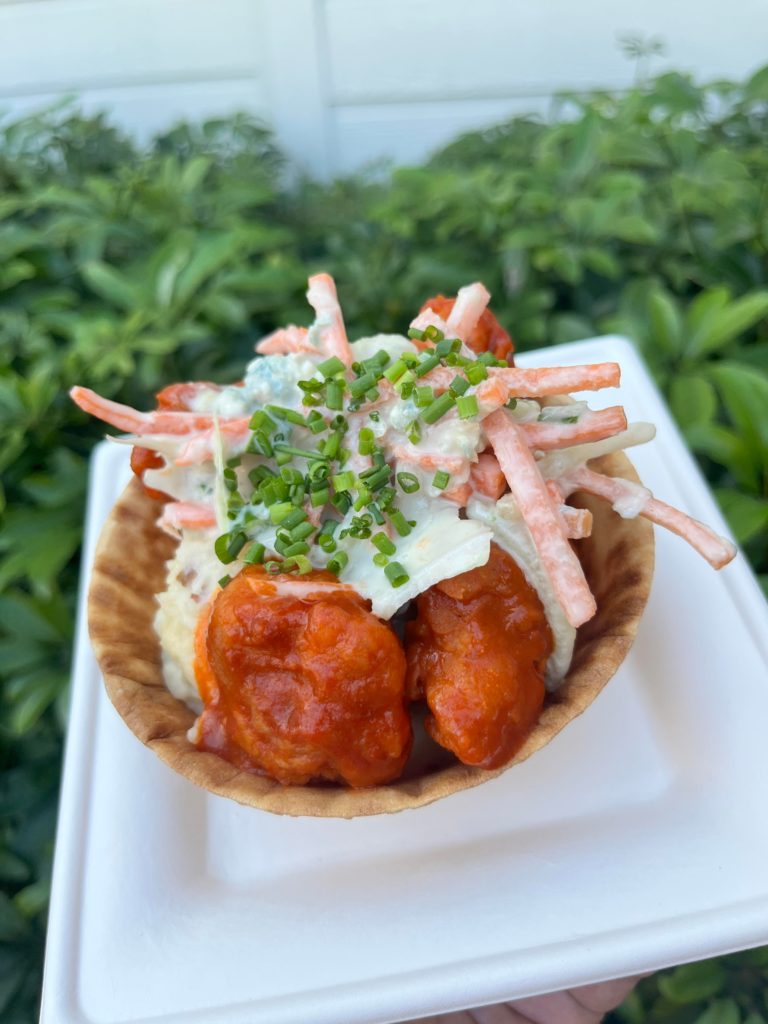 Kristen shares that the chicken was okay, and a bit spicy. 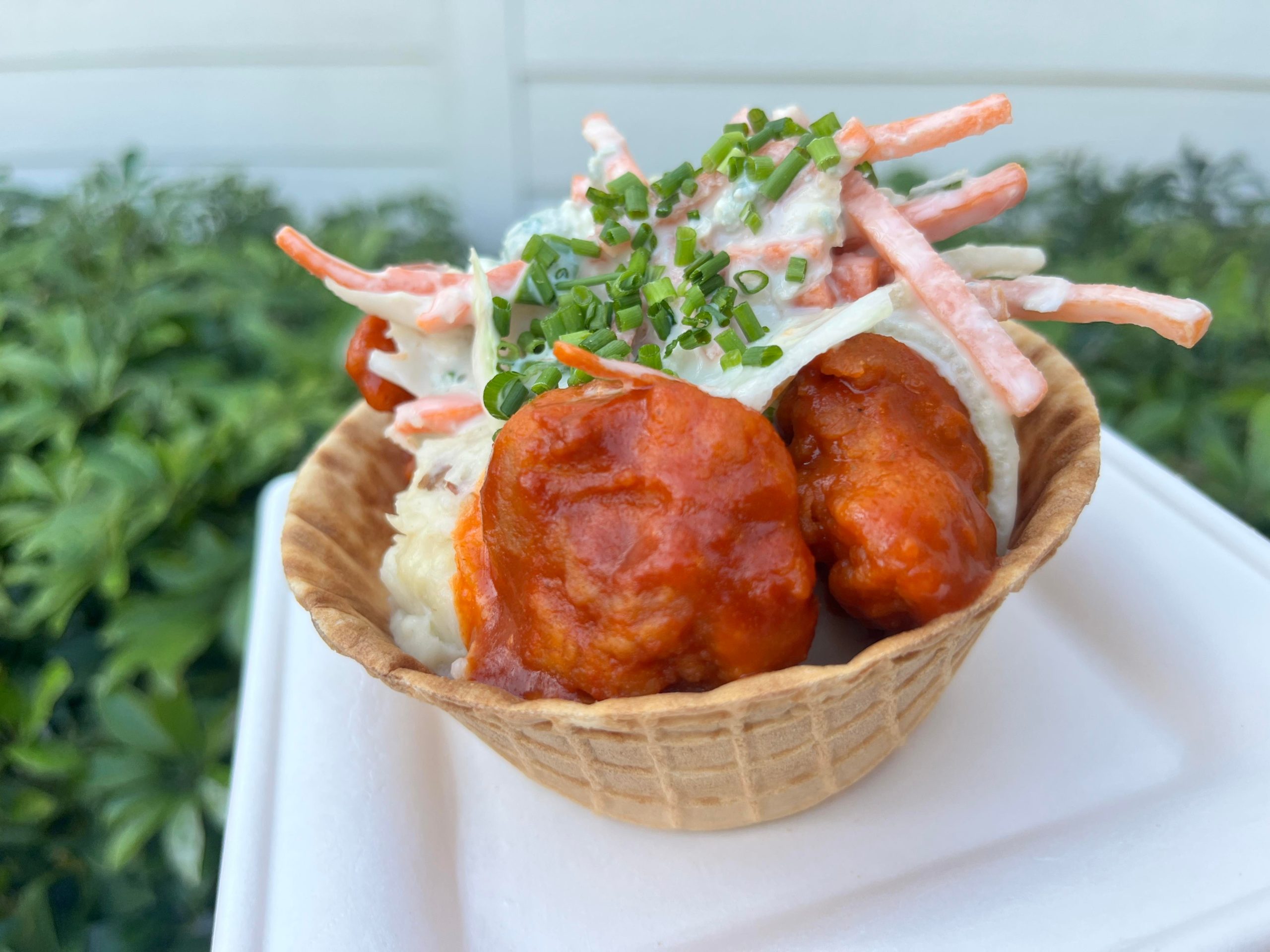 It’s delicious if you get a forkful with the mashed potatoes and slaw, which adds a zesty kick! 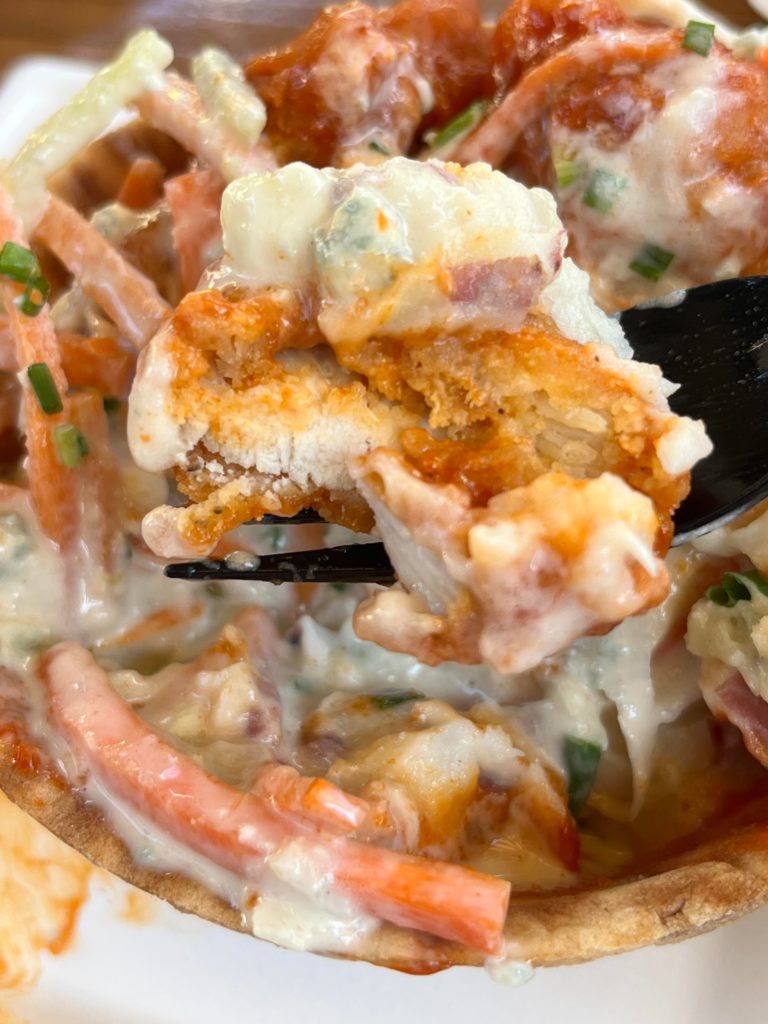 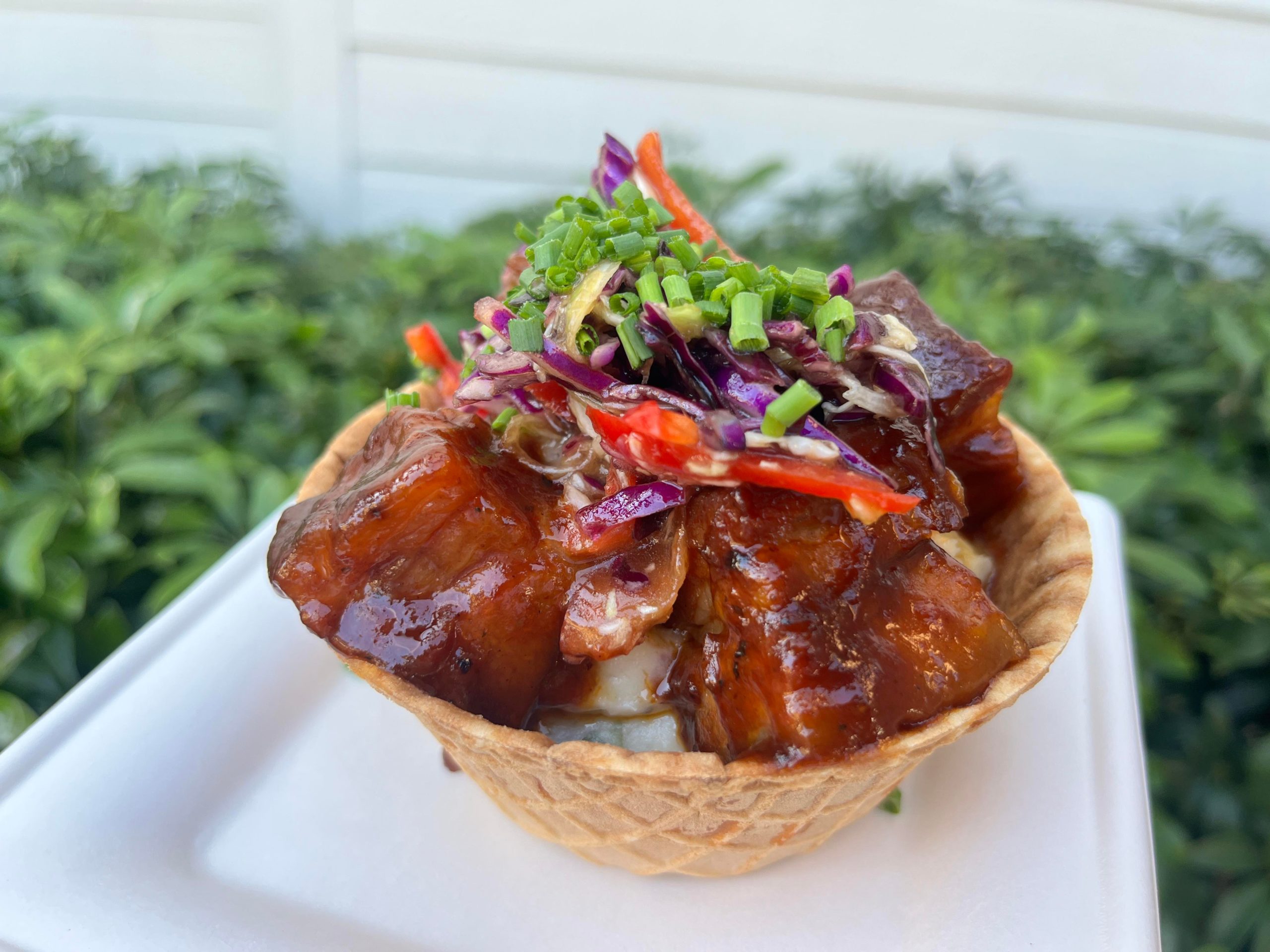 This one was our MickeyBlogger’s favorite of all 4! 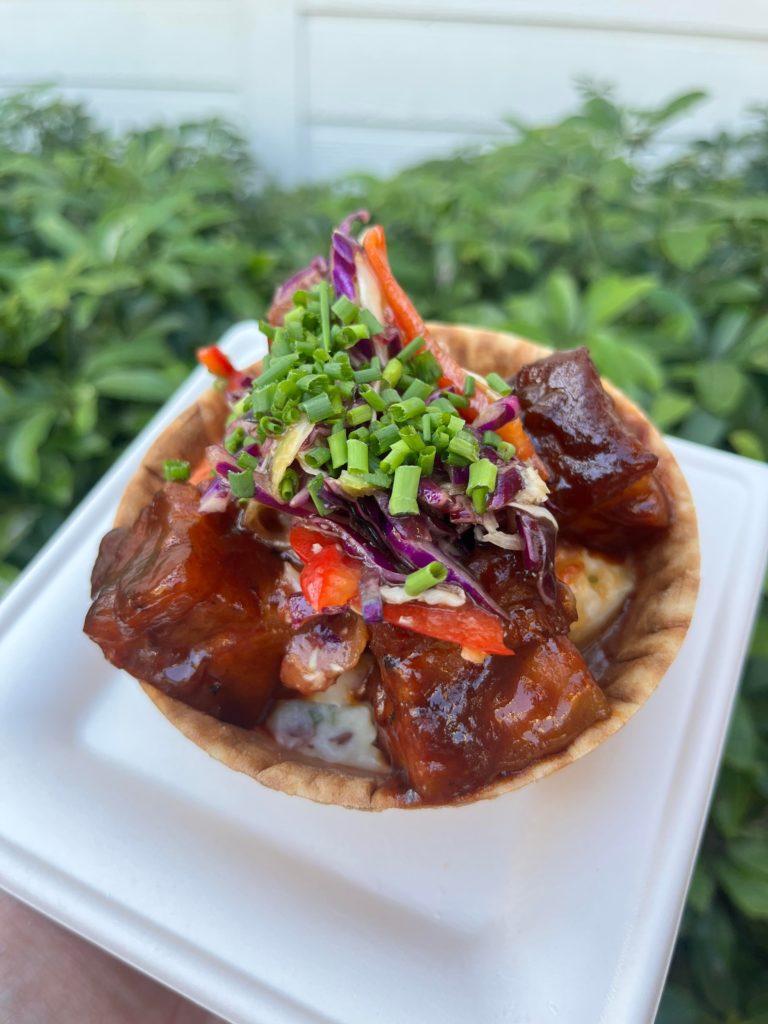 Kristen shares, “The pork belly is tender and flavorful and the sweet and savory mix from the slaw is super yummy!” 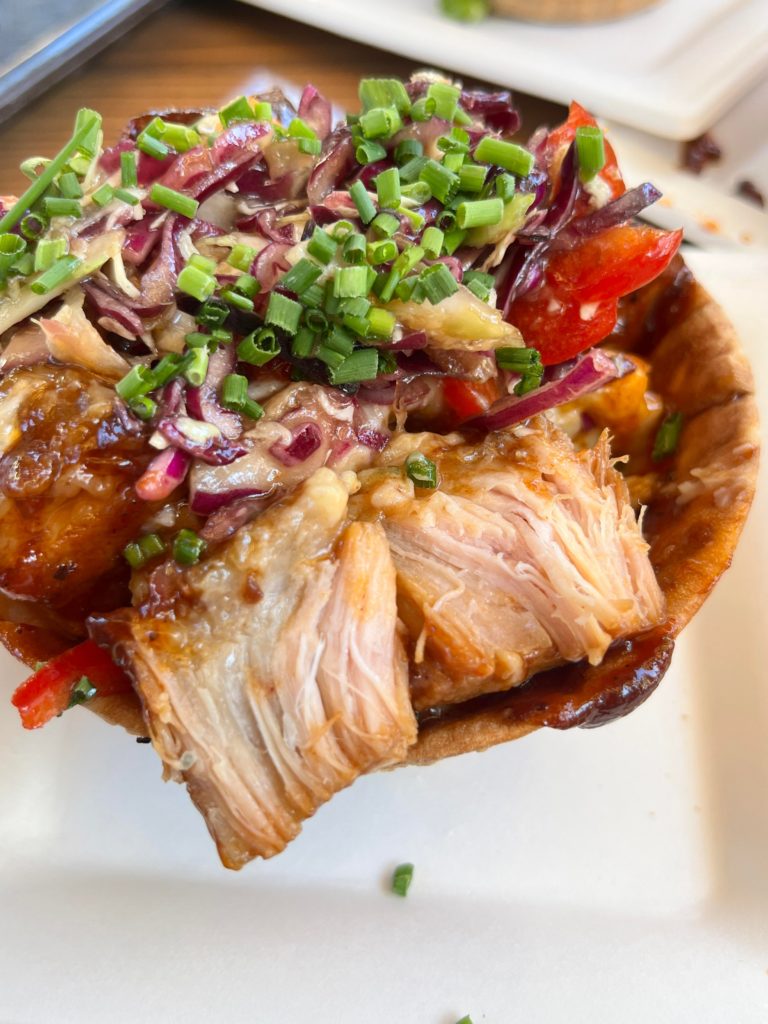 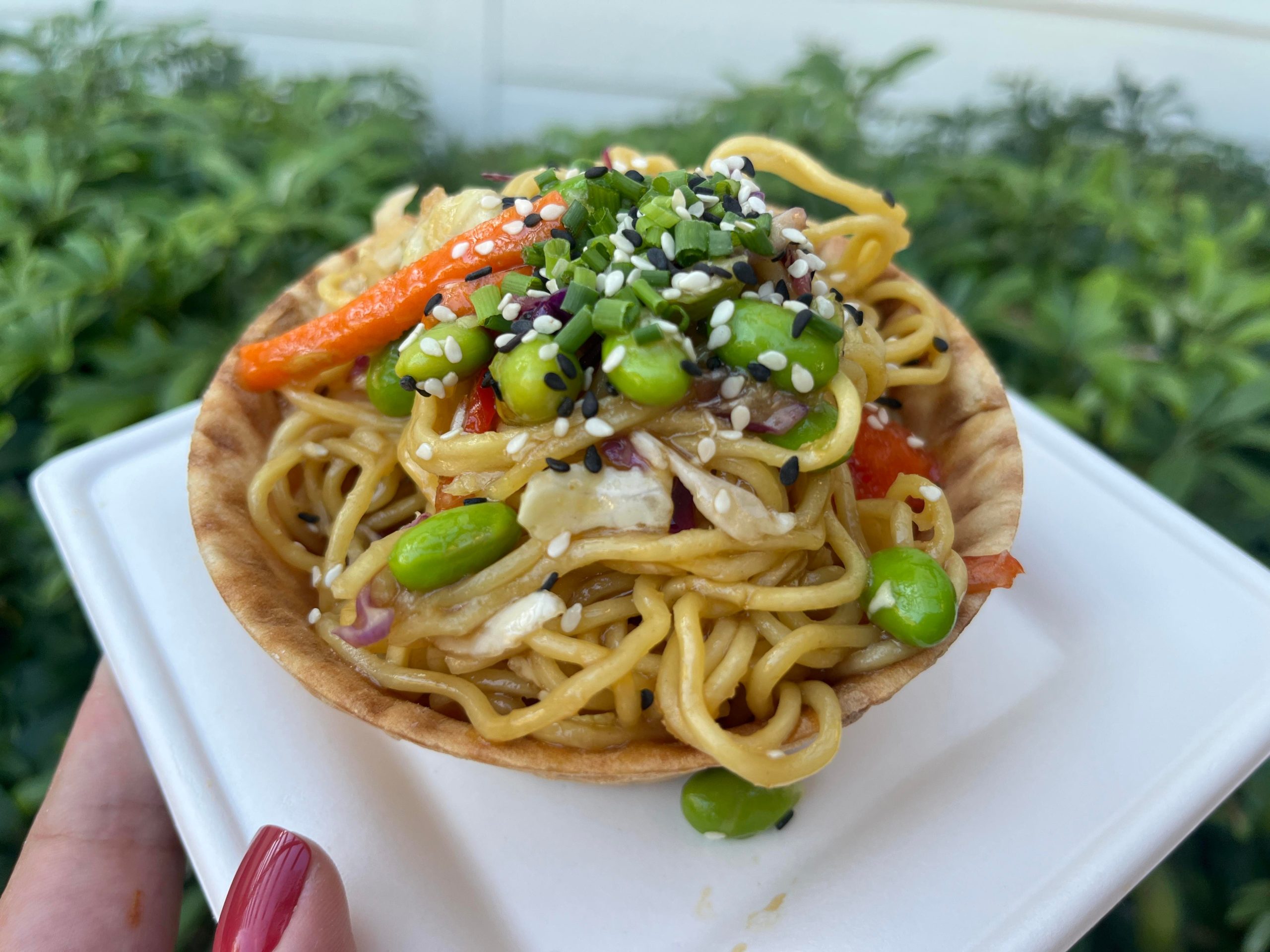 This one is just okay. It differs from the rest in that it’s served cold. 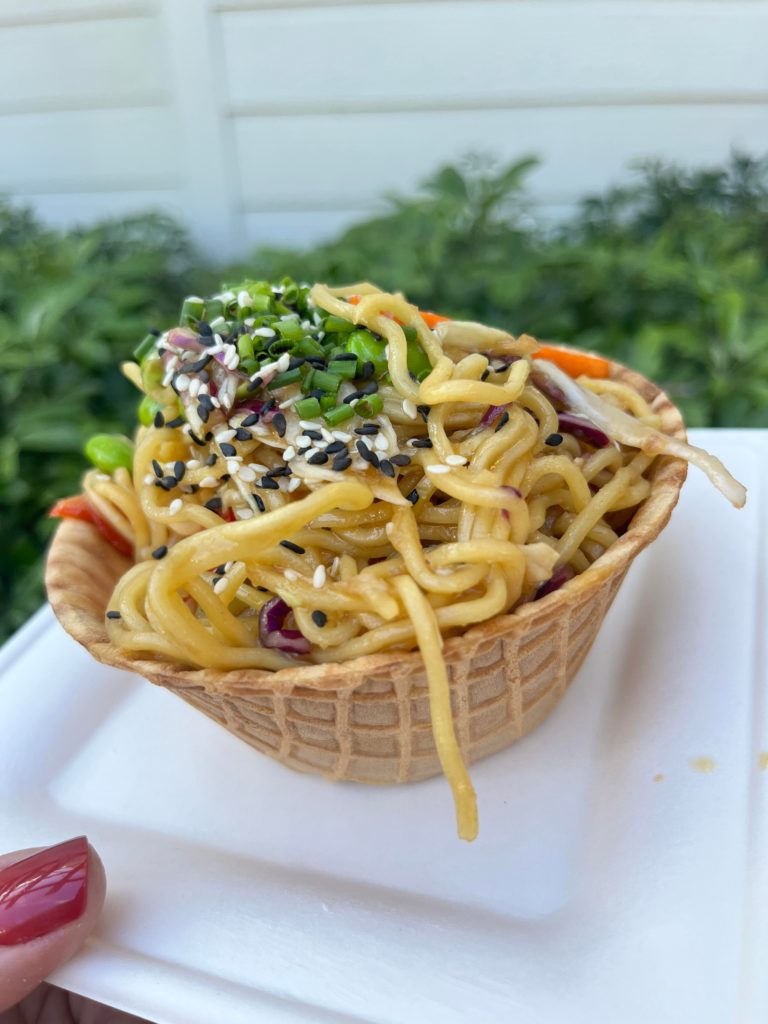 “There’s a nice soy favor but it’s not too salty; there’s a little sweetness that balances it. The veggies and edamame beans on top are nice and fresh and crispy.” 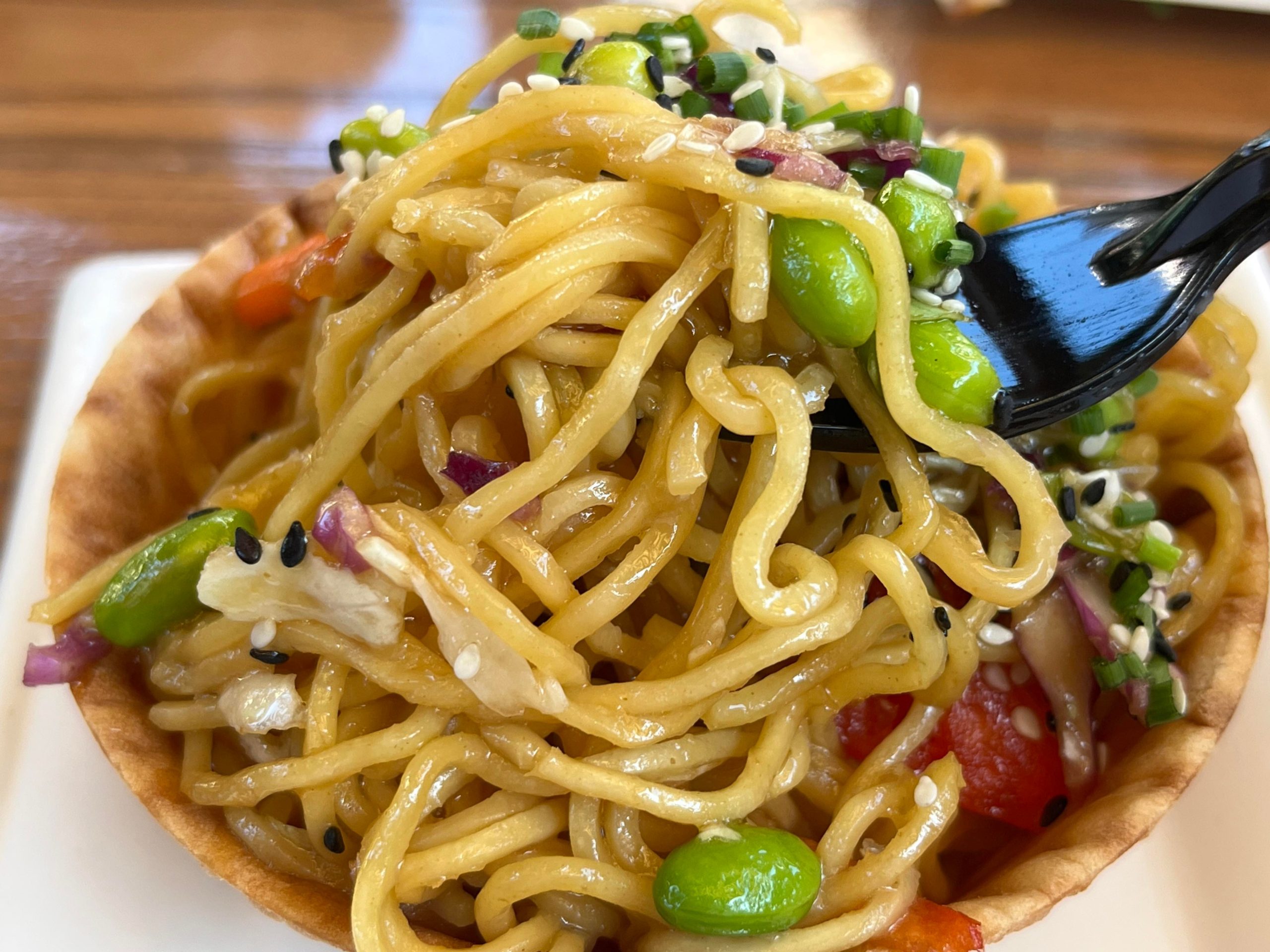 Guests can add vegan chicken to this offering, but we ordered it plain. Overall, we liked the various concoctions!
Though they are small, they make a great snack option! As for the waffle bowls, they really didn’t add anything as far as flavor, and ended up getting mushy. 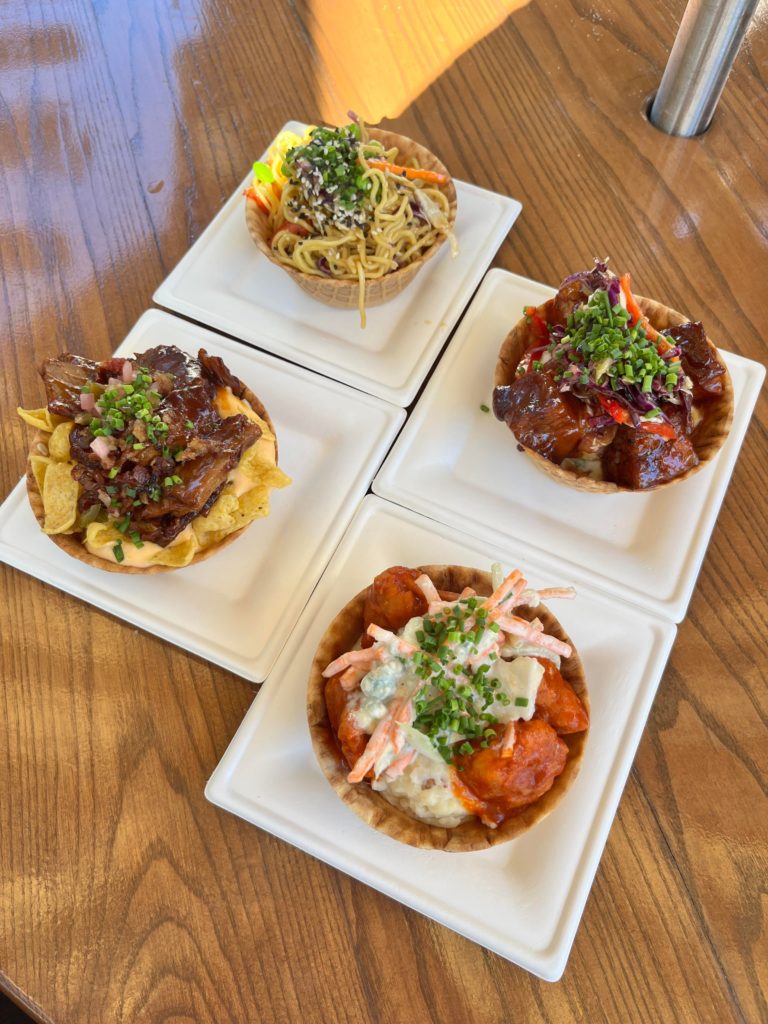 If you’re a foodie who loves to try new things, head to Hollywood Studios to sample these four savory waffle bowls that just arrived at Fairfax Fare!