Aladdin on Broadway Celebrated Its 8th Anniversary By Giving Away a Cruise! 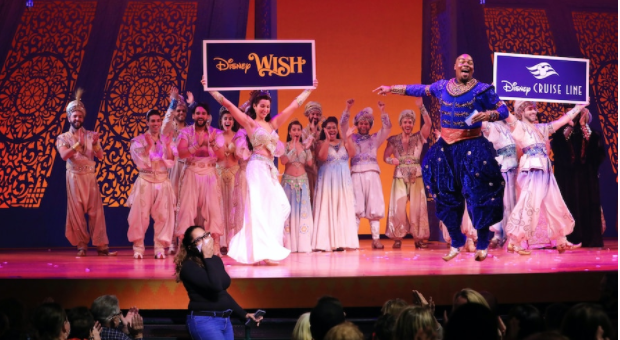 What a way to celebrate 8 magical years on Broadway than by giving away “wishes.”  This is exactly what happened at ‘Aladdin on Broadway!’  March 20th marked the official anniversary of this beloved musical and to celebrate, the 888th audience member was treated to a Disney Cruise Line getaway aboard the aptly titled “Disney Wish!” 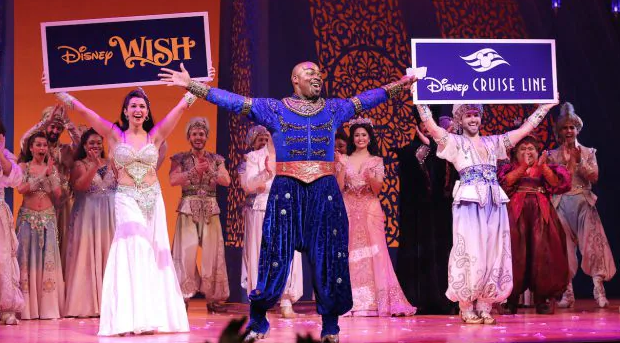 The announcement was made by none other than the Genie himself, Orlando native Michael James Scott who originated the role of the Genie eight years ago and continues to dazzle New York audiences to this day!  Since he is quite literally in the business of granting wishes, it seemed only fitting to have him close those show with a special surprise for the lucky audience member!

The Disney Wish will officially set sail this Summer and is a paradise at sea.  The ship features three brand-new family restaurants, the world’s first Frozen dining experience, the AquaMouse (the first ever Disney attraction at sea) plus tons of cool and interesting spaces to explore. While the kids are off mingling with characters or hanging out with other passengers their age at the Oceaneers Club, grown-ups will have ample time to relax, dine and play in spaces designed just for adults!

Check out the big cruise reveal at Aladdin below:

“Aladdin on Broadway” first opened at the New Amsterdam Theatre on March 20, 2014 to critical acclaim and quickly became one of the biggest draws on the Great White Way.  It packed in the audiences and even broke 14 New Amsterdam Theatre house records! With New York City theatres back open, you can even take a visit to see Genie and the entire cast of “Aladdin on Broadway” during your next visit.  You can find information about getting tickets here.

Finally, if all this has you wishing that you could go on a Disney cruise, why not look into it? Simply fill out my form below for a free no-obligation quote! Readers are also encouraged to keep following along with MickeyBlog for more awesome Disney-related news and updates!