VIDEO: New Trailer Released for ‘Better Nate Than Ever’ Coming to Disney+

Making its debut on April 1st on Disney+, Better Nate Than Ever is a feel-good comedy adventure featuring showstopping musical numbers!  To give you a taste of the magic, Disney recently released both a trailer and a teaser poster for the film and we’re excited to pass that first look on to you!

Let’s start with the trailer below:

In the trailer, you may have heard both of the new original songs written especially for the film.  The first is “Big Time” sung by Rueby Wood who stars as Nate and the second is “#GoAwf” sung by Wood and Aria Brooks who stars as Libby.

For those unfamiliar, Better Nate Than Ever tells the story of 13 year old Nate Foster who has big Broadway dreams.  However, there’s one problem, he can’t even land a spot in the school play.  But when his parent’s leave town, Nate and his best friend Libby sneak off to New York for a once-in-a-lifetime opportunity to prove everyone wrong.

Below is a first look at the promo poster encouraging viewers to “Dream Big!” 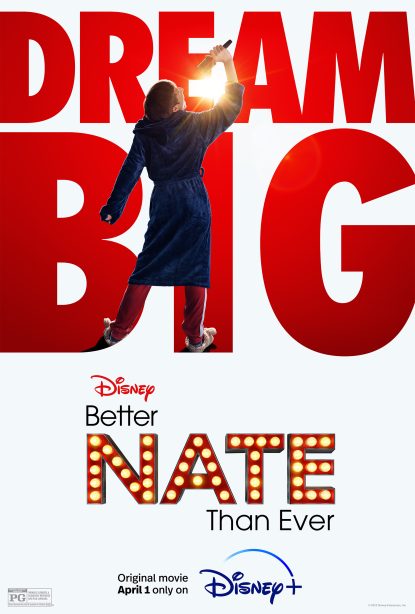 In addition to Wood and Brooks the film also stars Joshua Bassett, Michelle Federer, Norbert Leo Butz and Lisa Kudrow.  The film is based upon the award-winning novel by Tim Federle and was written for the screen and directed by Federle.

We can’t wait to see Better Nate Than Ever when it makes its streaming debut on April 1st! Readers are encouraged to keep following along with us for more Disney+ news and updates!