We recently headed to Magic Kingdom to try out one of the new 50th-anniversary celebration menu items at Columbia Harbour House: The Doom Burger. 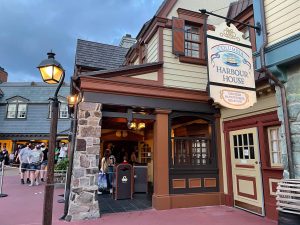 Found in Liberty Square straight opposite The Haunted Mansion, Columbia Harbour House is predominantly known for its seafood options such as their lobster roll and fried shrimp, it’s not a spot you’d typically expect a vegan option.

However, the spot used to be the home of the Lighthouse Sandwich- a fan favorite among plant-based guests which was retired with the introduction of the Doom Burger offering.

As seen above, the Doom Burger is a plant-based crab cake offering topped with cabbage slaw and onion on black bread to mimic the Doom Buggy that takes you through The Haunted Mansion.

The app will automatically only show you the three plant-based sides when ordering this menu item, with the option to show the other non-plant-based side which is the hushpuppies. 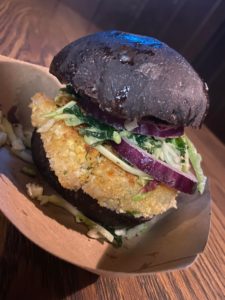 Upon receiving the menu item, we were impressed with how appetizing the crab cake and slaw looked, however, the bread had a lot of visible grease patches on. 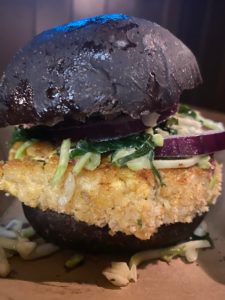 The Doom Burger came with a lot of the cabbage slaw as well as three slices of raw red onion, which added flavor and crunch to the dish and were definitely a welcome addition. 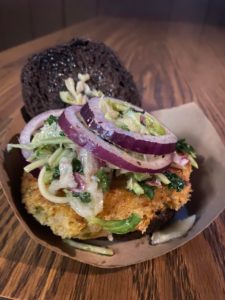 However, one thing was severely lacking: sauce.

Unfortunately, the lack of sauce left the burger incredibly dry which was only magnified by the incredibly dry bread, making the offering difficult to eat without guzzling down water after every other bite. 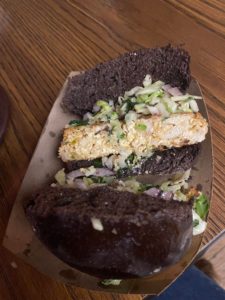 The plant-based crab cake and slaw are both delicious, but without the sauce to enhance the dish and add moisture, the whole dish just doesn’t satisfy. 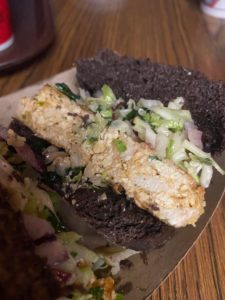 Overall, the Doom Burger is a welcomed addition to the plant-based options at the Magic Kingdom park, however, we can’t see ourselves craving it anytime soon.

Have you tried this menu option out yet? What were your thoughts? Let us know in the comments.