Let’s kick things off the right way by looking back at 1977’s A New Hope, with Luke dominating the screen time by just over double of Han Solo in second. 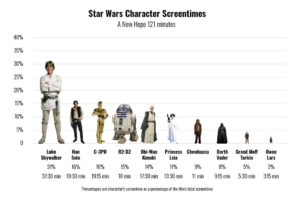 The Empire Strikes Back sees Princess Leia and Chewbacca jump from sixth and seventh all the way to third and fourth. 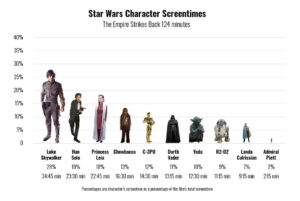 The last up to finish the original trilogy is Return of the Jedi, with Luke dominating the screen time once again.

It can be seen that Darth Vader’s screen time has shot up dramatically, understandably. 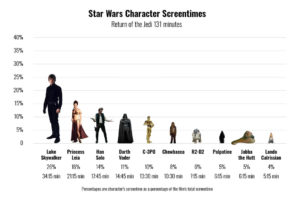 Now we’re onto a character breakdown for each of the characters in the original three Star Wars movies.

I always thought we saw more of R2D2 and Yoda in the original trilogy but it appears not! 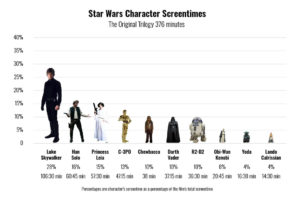 Heading into 1999 we start with The Phantom Menace, the first of the prequel trilogy which was once hated but now is beloved.

Why did it feel like we saw so. much. more. of Jar Jar Binks than only 17 minutes?! 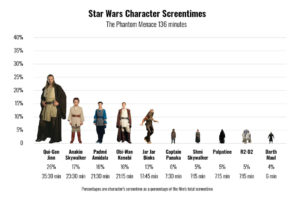 In 2002’s Attack of the Clones, we see Anakin Skywalker shoot up to the first place, with Obi-Wan and Padmé Amidala coming in an almost equal second and third. 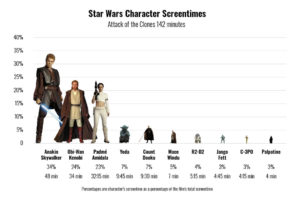 Coming up next we have Revenge of the Sith with the highly anticipated turning of Anakin into the fearsome Darth Vader.

Palpatine beats Padmé to third place which makes perfect sense given how much of a role in played in Anakin turning to the dark side. 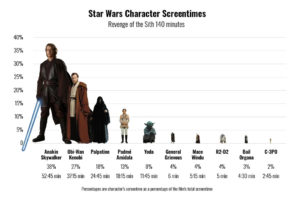 It should come as absolutely no surprise that Anakin is the character we see the most in the Star Wars prequels given that the whole story arch revolves around his undoing. 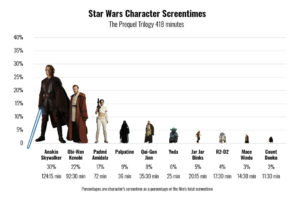 We’ve made it all the way to the controversial sequel trilogy, which brought Star Wars back to the big screen by the lead of The Walt Disney Company.

The Force Awakens was released in 2015, bringing new beloved characters to our screens including Rey, Finn, and of course, BB8. 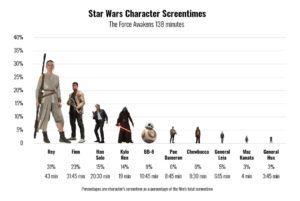 The Last Jedi reintroduced Luke Skywalker to the world with a focus on his and Rey’s companionship, bringing Luke to second place with 14%. 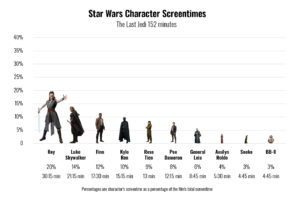 Rey absolutely dominates the last of the newest trilogy with over the amount of screen time as Poe and Finn combined. 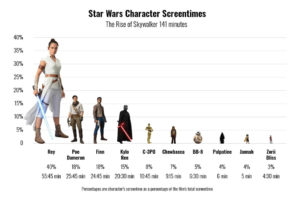 Rounding up the sequel trilogy we have Rey, the newest of the Skywalker clan being the major presence throughout the three films. Finn comes in second, with Kylo Ren/Ben Solo third. 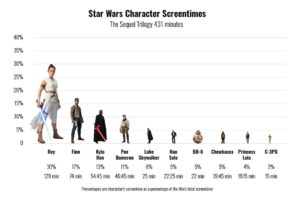 Surprisingly too, BB8 comes in seventh place in the trilogy but still remains number 1 in everyone’s hearts.

Of course, to top it all off we have a breakdown of the whole Skywalker saga within Star Wars and it makes our nerdy hearts happy.

It has also been confirmed that Anakin and Vader’s times have been combined to come to the below total of 13%. 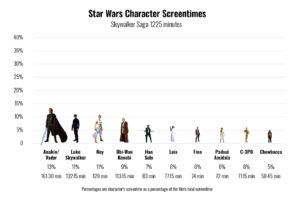 It’s surprising that Obi-Wan is seen more throughout the whole Skywalker saga than Han and Leia, as well as Finn having more screen time than C-3P0 and Chewbacca. 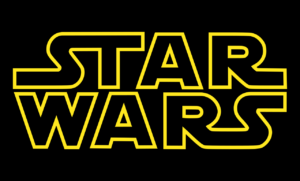 What surprised you the most in the Star Wars character screen time breakdown? Let us know in the comments below.