Celebrity optician Tom Davies is well known for his work designing eyeglasses for your favorite stars.  Some of his most recent work includes designing the eyeglasses for Disney’s latest live action “Cruella.”  On June 9, several pair of these glasses (including hundreds of others) were stolen when Davies’ shop in Sloane Square was burglarized.  According to the UK DailyMail, Kirk Marchbank has been arrested and will appear in court while the stolen “Cruella” frames are still missing.

Davies was originally commissioned to create frames for the Barnoness, played by Emma Thompson.  Eventually Davies worked with costume designer Jenny Beavan to create 120 frames for almost all cast members, including multiple pair for Cruella herself (Emma Stone) as she transitioned from Estella to Cruella. 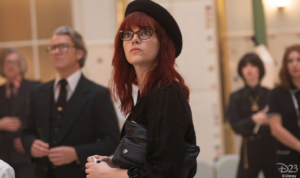 Davies “Cruella” Frames Were To Be Auctioned for Charity

Davies was planning to display the stolen “Cruella” frames during London Fashion Week.  They were taken during the June 9 burglary along with hundreds of other frames worth a half a million pounds (about $700,000 USD).  After the robbery, Davies posted flyers on social media and on lamp posts around London. 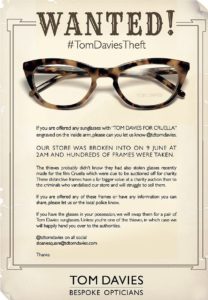 The flyer reads “If you are offered any sunglasses with ‘TOM DAVIES FOR CRUELLA’ engraved on the inside arm, please can you let us know @tdtomdavies.” It continues “The thieves probably didn’t know they had also stolen glasses made for the film Cruella which were due to be auctioned off for charity.  These distinctive frames have a far bigger value at a charity auction than to the criminals who vandalized our store and will struggle to sell them.”

Davies also offers to swap any returned “Cruella” glasses for a pair of Tom Davies sunglasses.  Unfortunately, thus far Davies’ efforts to recover the frames have been unsuccessful.  While the Daily Mail reports that detectives may have retrieved one pair of sunglasses, the Cruella frames are still missing.

It is unclear if Kirk Marchbank is the gentleman who appears in the video caught by Davies’ security cameras.  Hopefully more information should be revealed in the following weeks.  Marchbank is 49 and lives in Fulman and will appear at the Westminster Magistrates Court today.

Keep following along for more updates in this interesting case!