Everyone’s favorite experiment has taken over yet another classic Disney film for the Stitch Crashes Disney collection. This time Stitch has invaded the 1959 animated classic Sleeping Beauty.

It seems as though Flora and Merryweather have been fighting about colors once again as Stitch is half pink and half blue! 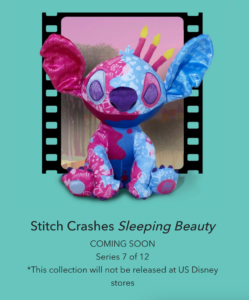 Fauna has even added her own touch to Experiment 626 with some birthday candles!

The mismatching color detailing on his paws is adorable! 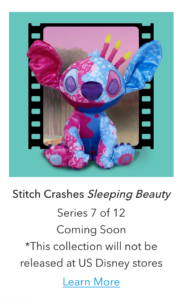 As with the Stitch Crashes Aladdin collection, this wave will not be released at US Disney Stores. This is, unfortunatly, most likely to due with the mass closures of the stores across the nation.

It is not currently known if the collection will continue to be released in UK and European Disney Stores, given the upcoming closures. 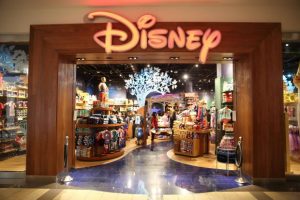 Stitch Crashes Sleeping Beauty officially kicks off the final half of the collection, so let’s take a look back at the previous releases.

Kicking off the collection was Beauty and the Beast, with Stitch holding the enchanted rose within his mouth.

From then on, starting with Lady and the Tramp, the collection was not being released with the Merch Pass system that was used for collections in the past such as the Minnie Mouse: The Main Attraction collection.

The collection is still incredibly popular however, with the most recent Pinocchio release drawing huge crowds and lines.

All collections have sold out upon release and the love for the collection doesn’t seem to be dying down.

Upcoming releases for the collection include Mulan, Snow White and the Seven Dwarfs, The Jungle Book and more.