5 Epic Details To Be On the Lookout For During Your Avengers Campus Visit!

After months of covering every minute detail of the Avengers Campus at Disney California Adventure Park, we thought we knew pretty much everything about this new Marvel-themed land. But, we were wrong! Marvel released details on a handful of little details added into the Avengers Campus that bring an extra dimension of fun to the campus.

Here are five hidden details for you to find during your visit! 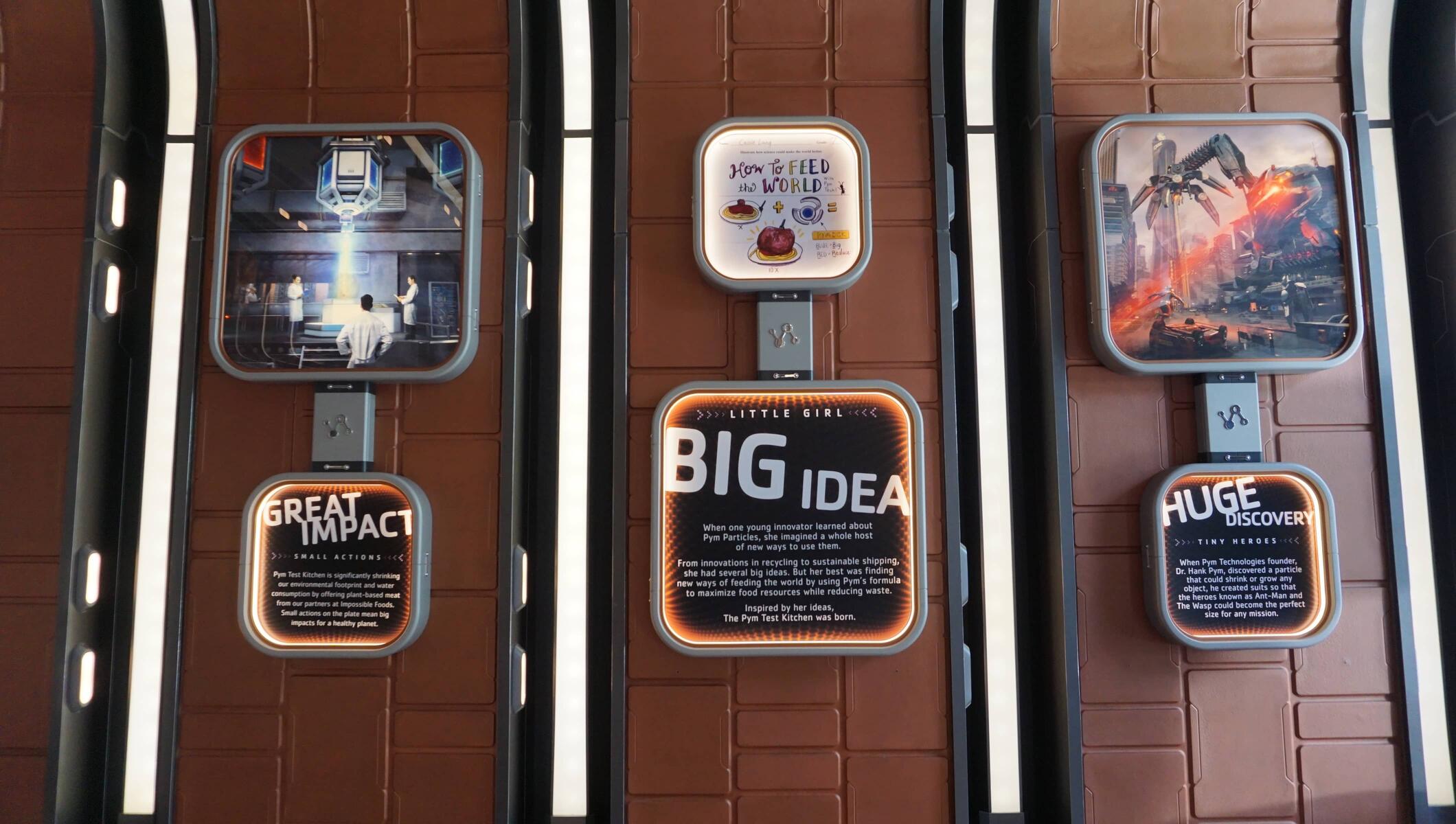 As you enter PYM Test Kitchen or Pym Tasting Lab you’ll see a giant phone (enlarged with PYM Particles of course) just outside.  We’re told that it belonged to Scott Lang (red one) and Hope Van Dyne (yellow one) and is linked into the VistaCrop network.  Not this phone actually has a practical purpose which is to highlight the menus at both locations.  However, play close attention as the text messages come in and you may see a few interesting details.  For instance, Natasha Romanoff (AKA Black Widow) says her favorite it menu item is the PB3 Superb Sandwich. 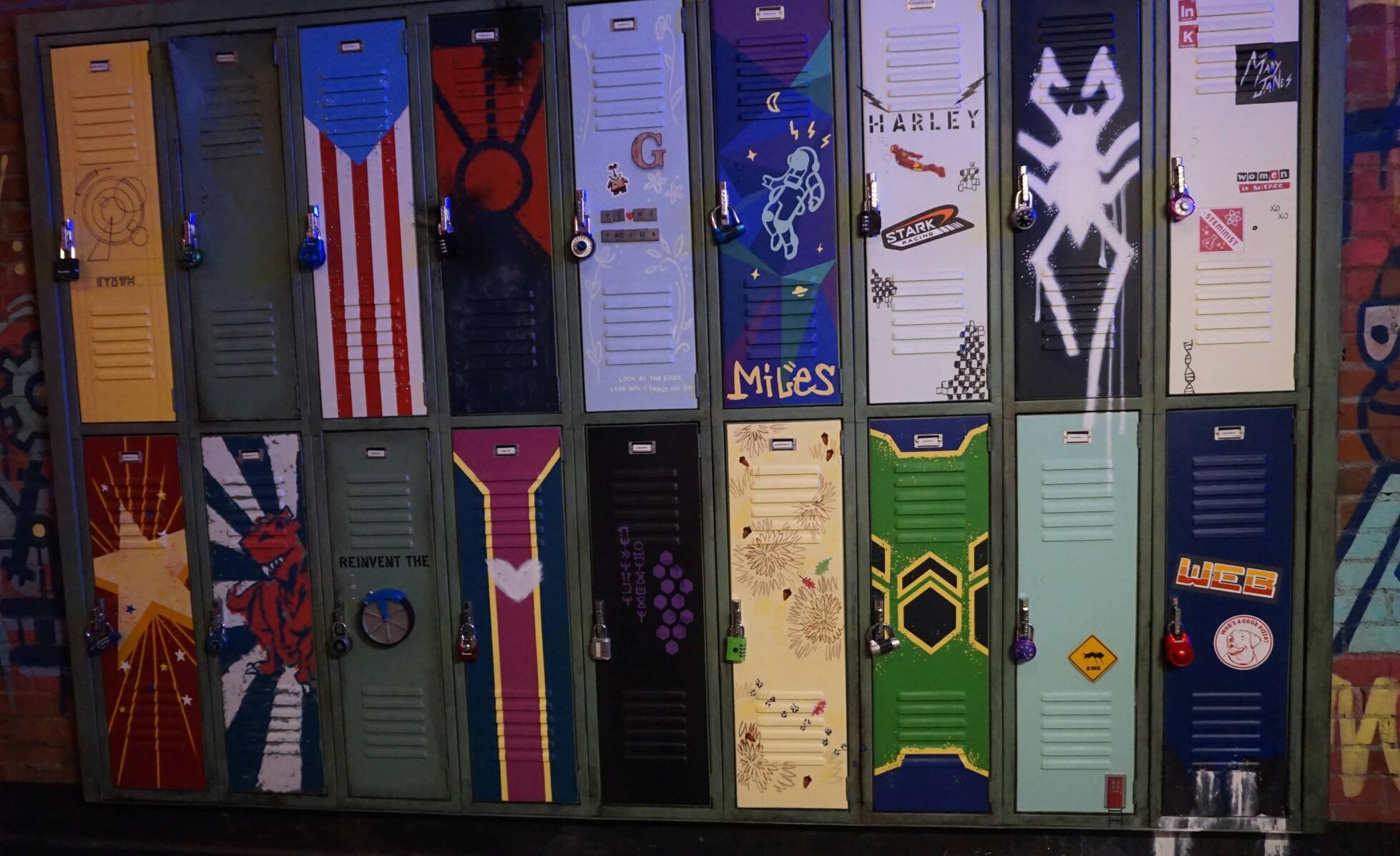 We’ve spoke a lot about The Worldwide Engineering Brigade (abbreviated as WEB) which is the home to the NEW headlining attraction WEB SLINGERS: A Spider-Man Adventure.  If you look closely at the details both inside and out, you’ll soon realize that this building used to belong to Stark Motors.  Remnants of stark’s legacy can sill be found.  There’s an old assembly line hanging overhead.

But all that’s in the past and W.E.B Engineers have moved into the building.  You can see traces of them throughout.  Be on the lookout for items from Doreen Green, Lunella Lafayette and Harley Keener. 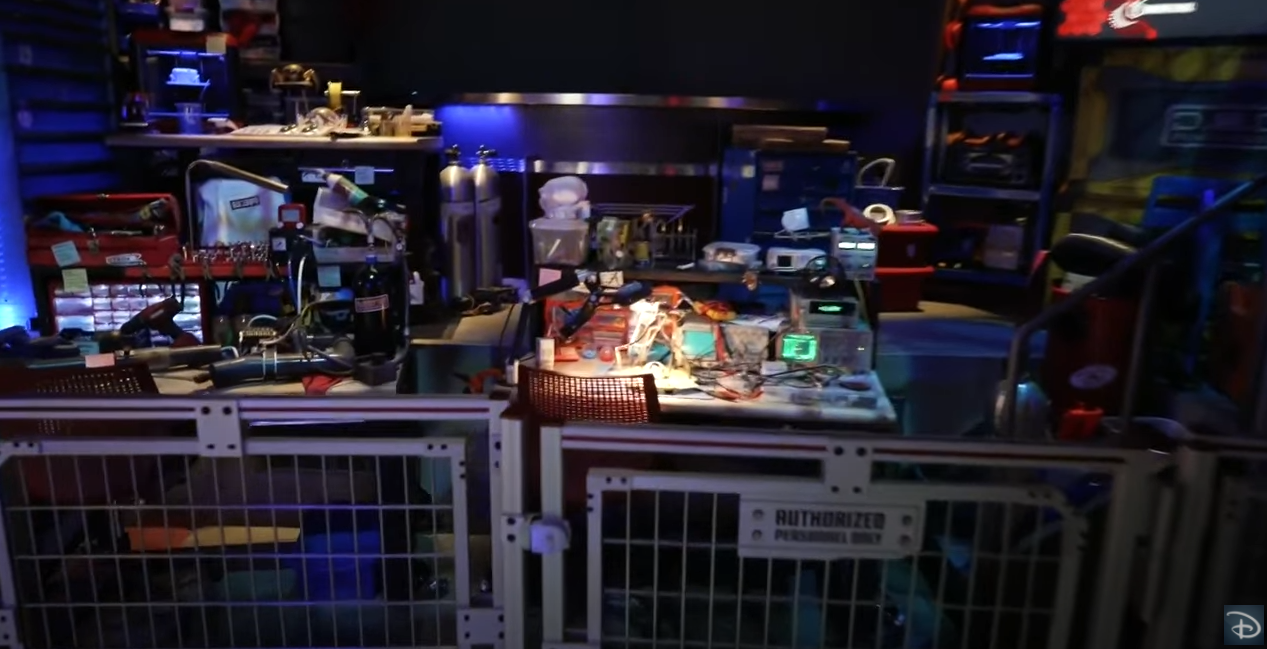 We’re also told that Peter Parker had a hand in assembling some LEGOs.  See if you can find them!

As you head through the locker room.  Also be on the lookout for lockers decorated by Miles Morales, America Chavex and Amadeus Cho.   There’s also leftover pizza boxes from their favorite pizzeria- Luck Dog’s Pizza! 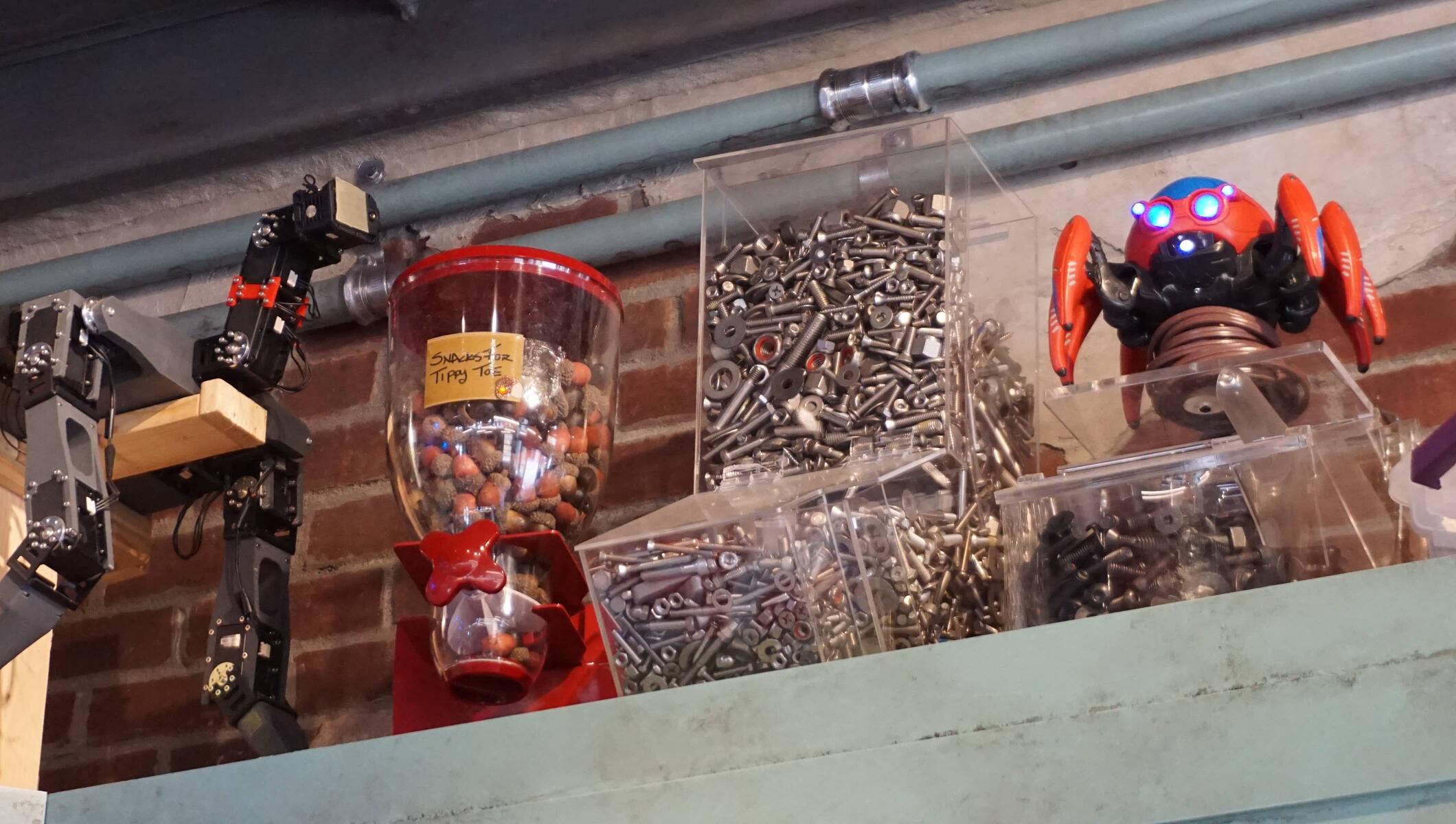 When wandering around Disney gift shops I always advise guests to Look UP! There may be a ton of tiny details that you’re missing above the retail displays.  This definitely holds true at WEB Suppliers. You’ll find everything from recently created inventions to Harley’s Potato Cannon as well as some treats if Tippy-Toe gets hungry! 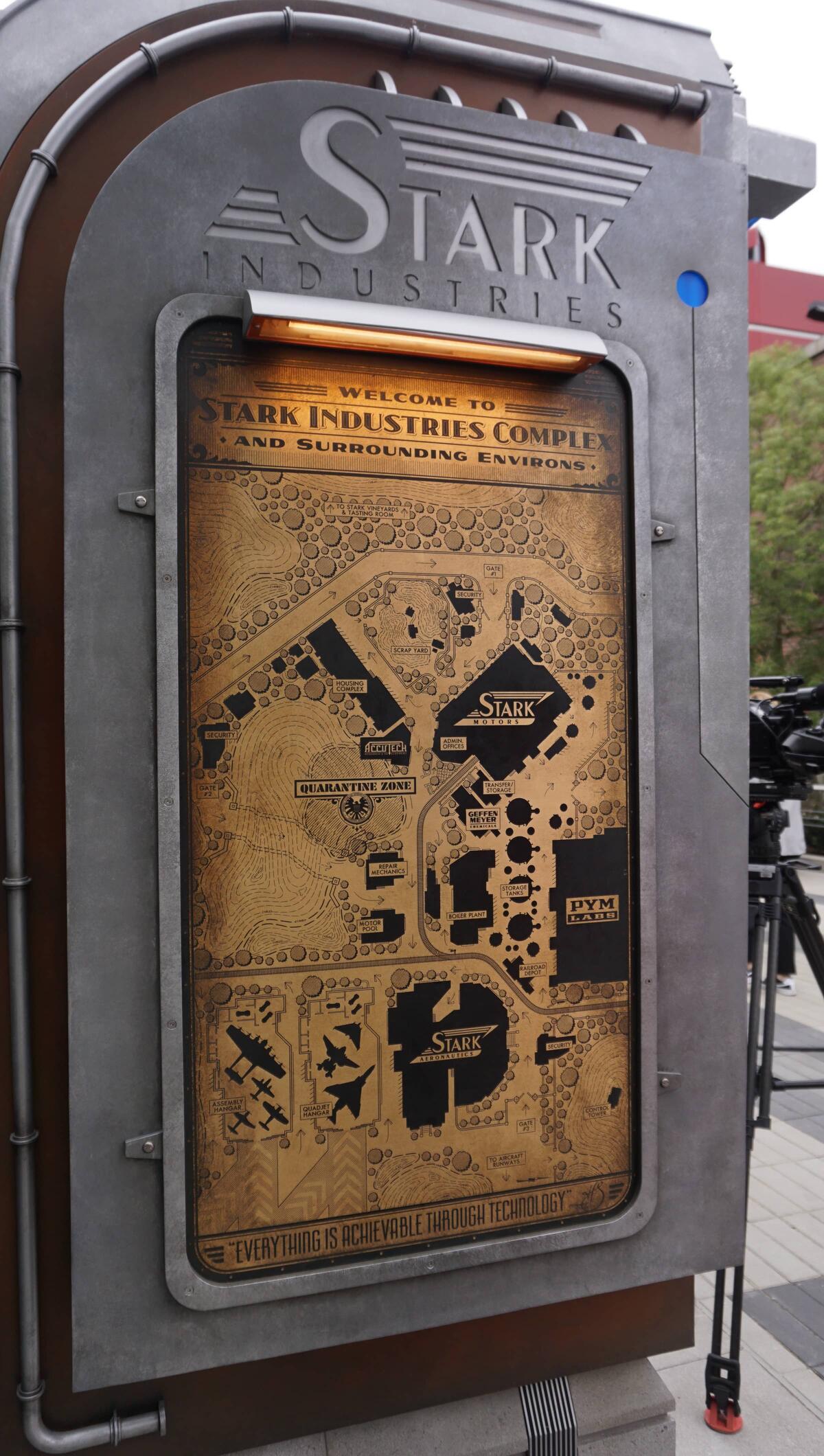 Traces of the Stark Legacy

The traces of Stark Motors isn’t just limited to WEB, you’ll actually find another item toward the front of the campus.  Look for the mark of the Avengers Campus (or in this case the Stark Industries Complex.) It not only features Stark branding across the top but also  AccuTech and Geffen-Meyer, two Stark subsidiaries.

Oh and why you’re in the general area, be on the lookout for the D.O.D.C (Department of Damage Control) crates. There seems to be a bit of a problem! 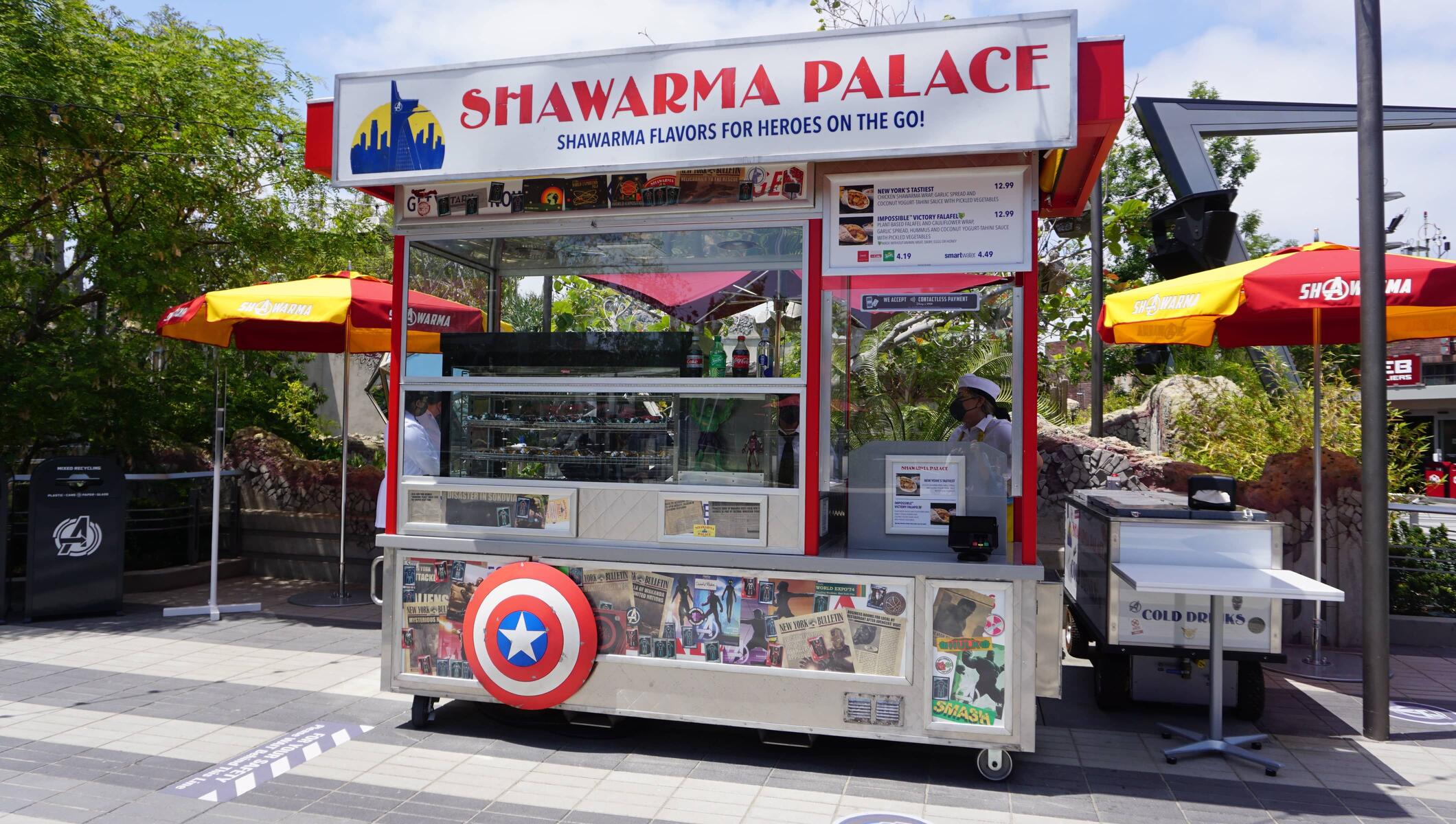 It was mere days before opening that Disney announced that there would be not one but two Shawarma Palaces in the Avengers Campus.  If you’ve been watching the films you know our favorite avengers are pretty hooked on the food. So it makes sense that they’d want to bring they favorite New York City eats to the Avengers Campus.

When you visit these food carts, take time to look around.  You’ll find some very interesting items that the Shawarma Palace has collected over the years.

Readers are encouraged to keep following along with MickeyBlog for further Walt Disney World news and updates! We’ll be coming to you LIVE from Avengers Campus on June 15th. Follow along with us!