The Disney Store and shopDisney have released a new collectible key to Commemorate the 55th anniversary of Winnie the Pooh and the Honey Tree- Pooh bear’s first appearance with the Walt Disney Company.

The newly available key sports the signature Disney key shape, with a design heavily inspired by different elements of the Winnie the Pooh character; and an aesthetic in line with what we have come to know of the loveable world hidden in the Hundred Acre Wood

Sporting a honeycomb pattern on the Disney font ‘D’ bow of the key, while continuing that same honeycomb design over the castle detail on the end of the key. You can’t have Winnie the Pooh without honey, of course!

The pin of the key, and a small portion of the shank, is dressed with Bee illustrations over a blue background; while the shank also sports a ‘Winnie the Pooh and the Honey Tree’ logo over a red background, with a small piece closest to the bow continuing the Bee illustrations.

The commemorative key comes in a window display box that sports golden foil accents; displaying the key in a brown stylized box with a Winnie the Pooh motif. This new addition is perfect for any avid key collector, or Winnie the Pooh admirer.

The key is exclusively available at the Disney Store, or on shopDisney for a total of $12.99 excluding sales tax. 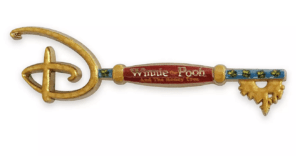 A pin version of the key can also be found online for the same price as the collector’s edition, allowing you to show your love of Winnie the Pooh on the go. The pin edition is perfect for fans of the key design who don’t have anywhere to display the collector’s items.