If you’ve been following along with MickeyBlog you know that yesterday we shared with you a first look at the cover of the upcoming Entertainment Weekly which features Scarlet Witch and Vision from Disney+’s upcoming Marvel series WandaVision. Today, more juicy details about the series have been revealed thanks to EW along with some new images from the show which we’re excited to share with you! 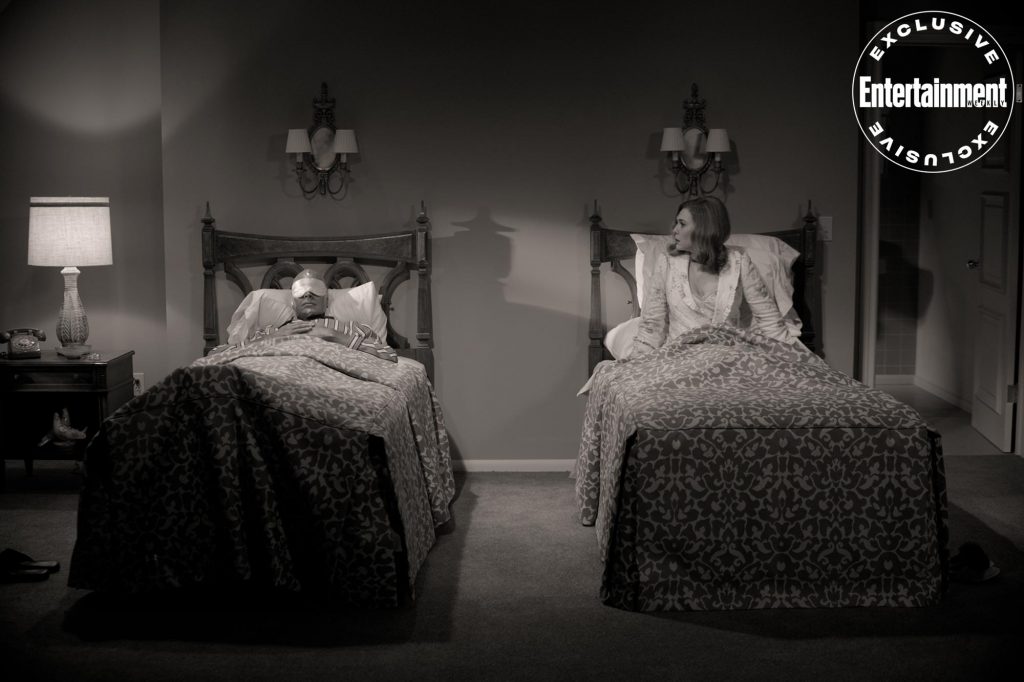 As previously reported by MickeyBlog, WandaVision is set to be a sort of action/drama/comedy hybrid and draws its inspiration from TV comedies from the ’50s through ’90s.  However, what we didn’t realize is that much of the show was be shot in classic black and white and even in front of a life-studio audience.

But the nostalgia didn’t end there, apparently crew members came to the shoot in ’50s era clothing and vintage-style special effects were used similar to those utilized for classic programs like Bewitched or I Dream of Jeannie.  WandaVision was also filmed partly on Blondie Street at the Warner Bros. Ranch in Burbank which was also the home of TV classics like The Partridge Family and Bewitched.

Bettany and Olsen even spoke about their process for recording in front of a live studio audience saying that they rehearsed for it like you would a play! Check out parts from their interview below:

Though WandaVision wasn’t supposed to be the first new Marvel project out of the gate since Endgame, COVID-19 and an industry-wide shutdown had a massive impact on the schedule.  Since WandaVision was further along in production it got bumped ahead and will now make its debut on Disney+ before the end of 2020.   With movies like Black Widow and the Eternals getting pushed into next year it’s slightly fitting that WandaVision goes first. As EW says, “what could be a more fitting launch for this new stage of Marvel TV than a series that’s about, well, TV?”

As head writer Jac Schaeffer explains, “The show is a love letter to the golden age of television.” He continues, “We’re paying tribute and honoring all of these incredible shows and people who came before us, [but] we’re also trying to blaze new territory.” 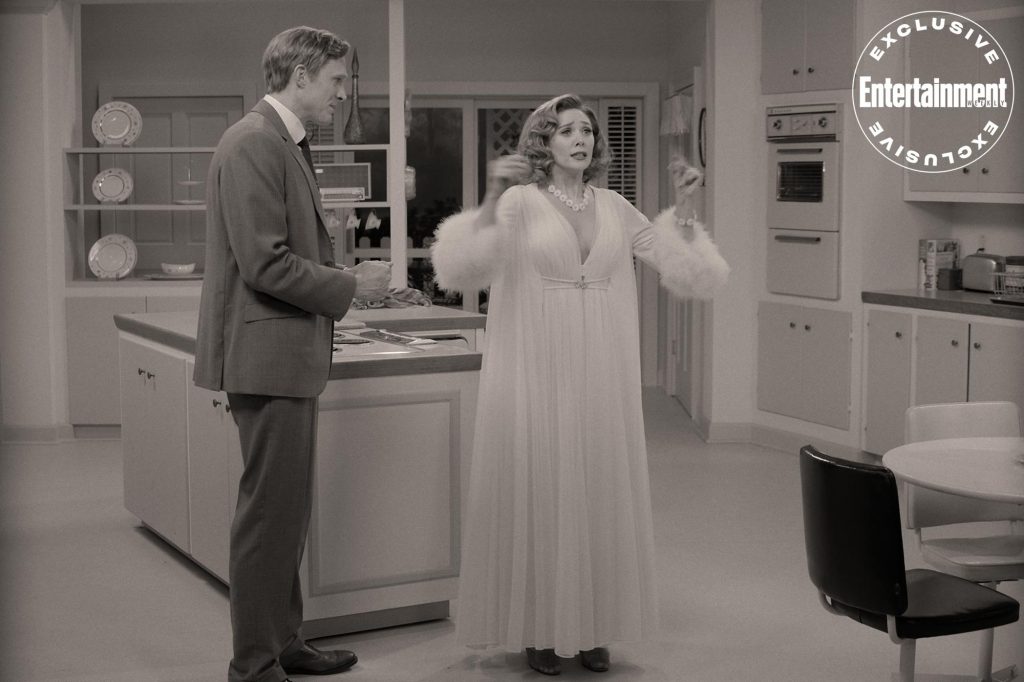 The prospect of a show where Marvel Studios had full creative control and could really push the envelope by bringing character driven stories to audiences in a new way was very appeal said Marvel president Kevin Feige, “It really energized everyone creatively at the studio, the notion that we could play in a new medium and throw the rules out the window in terms of structure and format.”

The idea to bring Wanda Maximoff and Vision and place them in sitcoms was Feige’s idea.  A self-professed sitcom geek, Feige recalls growing up on Nick at Nite and started his workday by watching reruns.  “I would get ready for the day and watch some old sitcom because I couldn’t take the news anymore,” he admits. “Getting ready to go to set over the last few years, I kept thinking of how influential these programs were on our society and on myself, and how certainly I was using it as an escape from reality where things could be tied up in a nice bow in 30 minutes.” 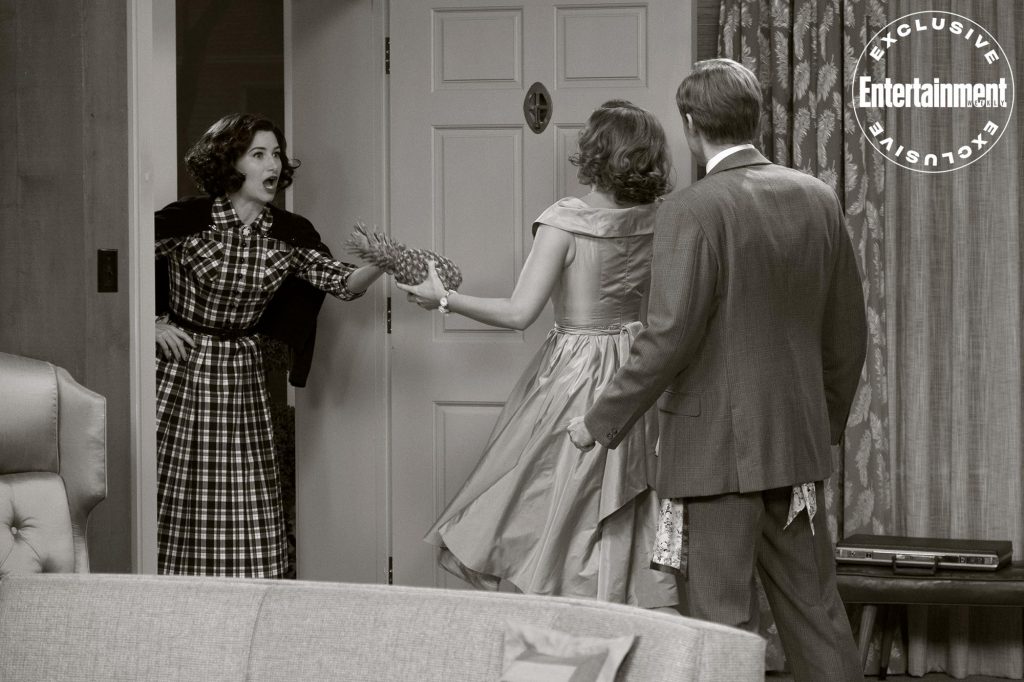 Jac Schaeffer (Black Widow and Captain Marvel) serves as head writer for the show and Matt Shakman as director. EW points out that Shakman’s involvement is interesting as he’s worked on shows like Game of the Thrones and Fargo but was also a child actor on Growing Pains spin-off, Just the Ten of Us.)

Though Marvel is remaining tight-lipped about the plot, we do know that the series is set after the events in Endgame. Schaeffer did tease a bit saying  “We find Wanda and Vision living a blissful suburban existence, trying to keep their powers under wraps.”  And let’s not forget that at it’s very heart, the show is a romance, following the relationship between Scarlet Witch and Vision.  “They’ve had a long and gentle love affair, right?” Bettany says. “It’s a pretty quirky relationship. She’s a witch, he’s a robot. Or artificial person, or synthezoid, or whatever your preferred name tag.” 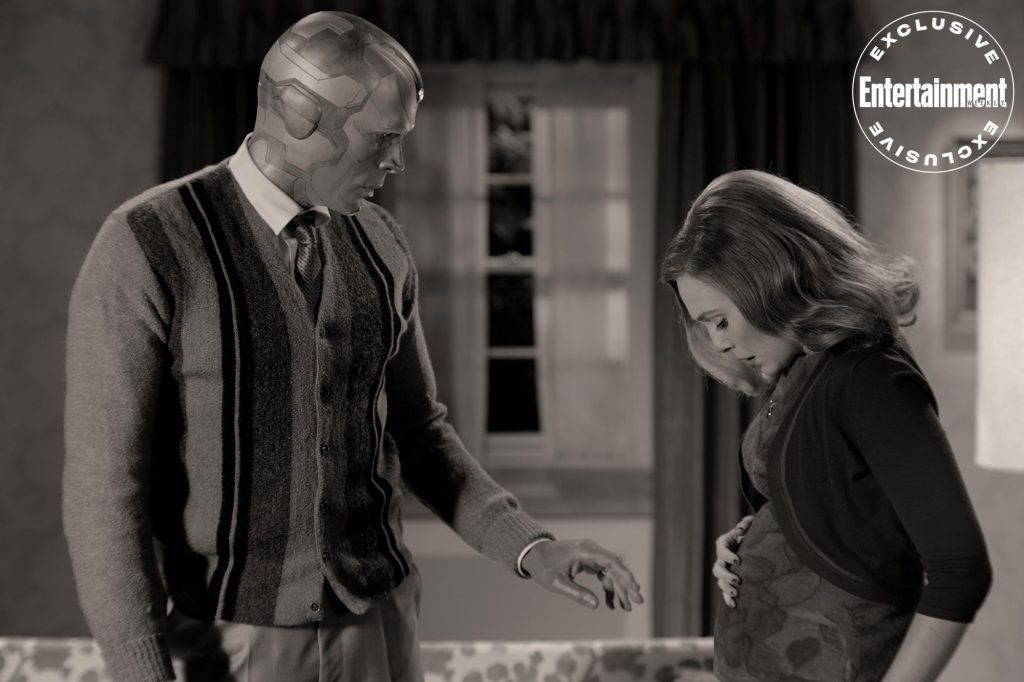 Bettany and Olsen are joined by Kathryn Hahn who stars as Agnes, the “nosy neighbor.” as well as Teyonah Parris who plays the grown-up version of Monica Rambeau from Captain Marvel.

To read more on WandaVision, order the December issue of Entertainment Weekly or find it on newsstands beginning Friday. Readers are also encouraged to keep following along with MickeyBlog for further Walt Disney World news and updates!