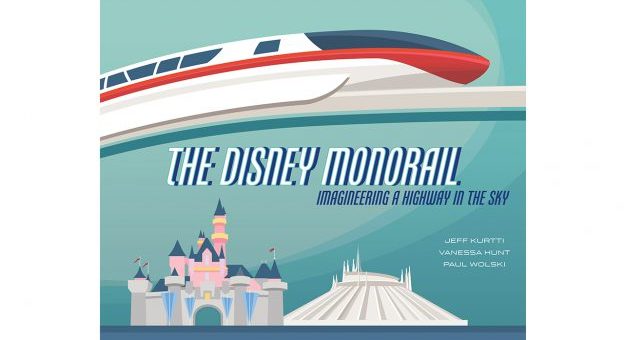 With the release of the new Disney Editions book, “The Disney Monorail: Imagineering a Highway in the Sky,” Disneyland Resort Ambassador Justin Rapp recently had the chance to talk with two of the book’s creators, Jeff Kurtti and Paul Wolski. In the interview captured below, they gave Justin an insider’s view of the content and the context of the book, and offered a behind-the-scenes look at how it came about.

JUSTIN: I’ll start with the first step of the creative journey— How did you approach this subject as you started this project?

JEFF: The challenge, as it typically is with Disney titles, is to create a story with sufficient depth and authority or new ideas or materials to appeal to a Disney fan, but also to not leave a reader who is fresh to Disney intimidated or feeling baffled. In the books I’ve done, that’s the balance for—and a reflection of—the breadth of the Disney audience. I’m not terribly interested in statistics and data as much as I am in telling a story. 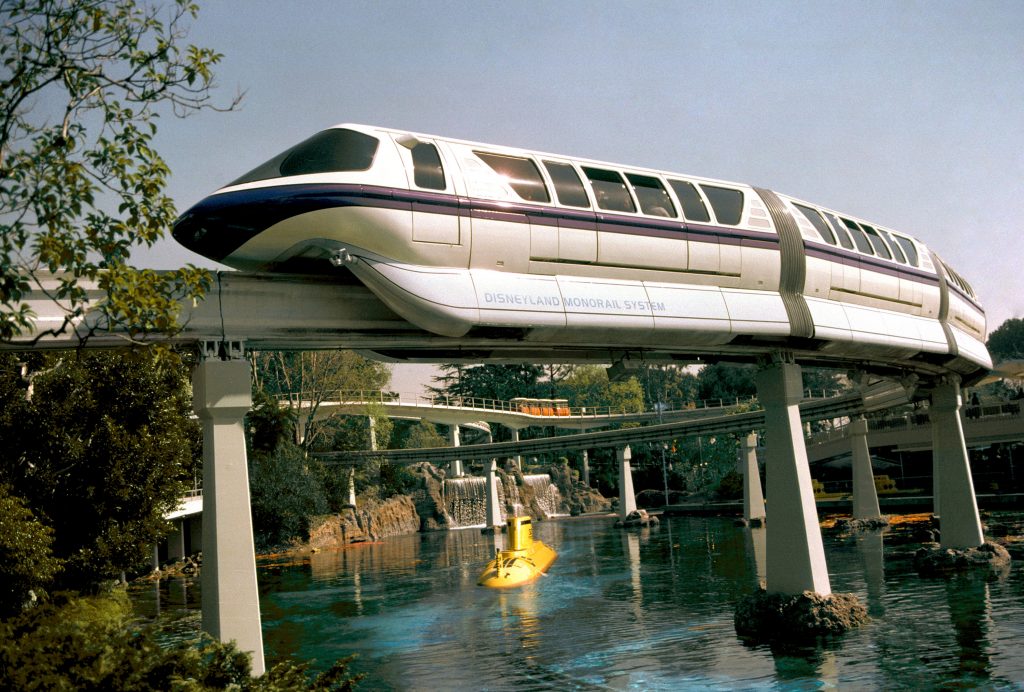 JUSTIN: That brings up an interesting point, I think. Why is the monorail so associated with Disney?

PAUL: In a way, the Monorail symbolizes Walt’s spirit of exploration, discovery and possibility—and Disney fans connect to those feelings. Disney has always treated the Monorail as a transportation and an attraction, and the story is always futuristic, optimistic—that very “Walt” idea of “progress.” A sleek and silent train of the future that you can ride today…

JUSTIN: We’ve had a Monorail operating at Disneyland for over 50 years. What was your first knowledge or experience of a Monorail growing up?

PAUL: Growing up in Florida, I knew of only “one Monorail,” and was not really aware of the evolution of the tech or of Walt’s deep commitment to it. I also knew superficially that many versions had evolved over the years, but in the book we feature a fun visual spread showing all seven “Mark” series Monorails, and include their years of operation, color schemes and notable physical features. It’s great to view and compare them in one layout.

JUSTIN: What was the origin of your story? Was this an idea that you and your co-authors brought to the table, or something else?

JEFF: We work a lot with a wonderful editor named Jennifer Eastwood, and she called one day with that “headline concept” for a book: “The Disney Monorail.” Like so many of us who are fans at heart, she remembered her childhood family vacations to Walt Disney World, and was lucky to have stayed at Disney’s Contemporary Resort almost every summer. So in Jen’s fond recollections, the Disney Monorail has a deep resonance and meaning. I think she knew a lot of other Disney fans feel that way too!

I couldn’t imagine a book that I knew would be so reliant on the collections at Walt Disney Imagineering without Vanessa Hunt as a collaborator, so I pitched that she co-author with me. Vanessa is not just deeply familiar with the Walt Disney Imagineering Art Collection; she has an aficionado’s understanding of the cultural meaning in the works—she’s a big enough fan to know what will be of the most interest. Her personal talents and art and collections experience combine for not just a skill with using the visuals to support and to advance storytelling, it’s given her a deep conscience about protecting the artists and artistic intent, and really protecting the quality of image reproduction.

Looking at how the visuals were assembling, I asked Paul to join us, and sort of “bring it all together,” which, of course, elevated the whole thing.PAUL: I’ve known Jeff for thirty years, and we’ve been good friends and colleagues, so our views are very simpatico. I was just so inspired by the story and the artwork of Disney’s monorails, and that notion of an “optimistic future,” I thought it would be so rewarding to bring together all the storytelling into a unified visual statement. Working with the vast number of images that Vanessa “curated” like an exhibit designer was a huge benefit to the overall “look” of things.

JUSTIN: No doubt one of the reasons the book is so visually stunning. It seems like every page is a kind of “reveal.” It did make me curious how you work as a trio to balance the storytelling.

JEFF: Unlike a lot of books, we all started out together. It wasn’t a procedural process where I wrote, then Vanessa picked art, then Paul did a design. We all worked in parallel to manage the storytelling in all forms, and create something where everything was harmonious.

PAUL: It also gave us three viewpoints, too, I think. We have a different experience and viewpoint on the subject. I’m a Florida kid, and Jeff was an Anaheim guy. Vanessa has her own point of view—generational and professional—on the subject.

In that way, the book begins to express itself, the work began to show, and tell us what it wanted to be, to best tell a compelling story. I think that the three of us temper and balance one another, and it enables us to create something with broader narrative and appeal.

JUSTIN: The art is truly varied and interesting, from early concepts to seemingly common things like signage and graphics.

PAUL: Vanessa assembled a gallery of WDI art pieces and photographs—many I had not seen before, and I’m sure have never been published. Several of them have been published, of course—but much of what we have seen before is from lower-quality sources such as photographic transparencies, some of them dating back to the 1980s. Vanessa insisted that all the art be from primary sources. So the art within this book even if we think we’ve seen it before, has rich resolution, focal clarity, and color accuracy that makes it new.

JEFF: I also had never really noticed how many early Disneyland design iterations, dozens of visions of various “Tomorrowlands,” feature a monorail as an expectation, as an expression of futurism. It’s there from the earliest notions of the Park.

PAUL: There’s something timeless about the Mark I design, as well as earlier depictions of futuristic travel that featured rounded curves and orbs. Now it’s a kind of retro style that has become an aesthetic that represents modern design 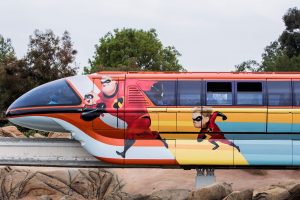 JUSTIN: That “Tomorrowland” vibe extends to the overall book design. I sensed inspiration from attraction posters, for instance…

PAUL: Regarding the attraction posters, the design of those graphics led me to really study the bold and clean graphic styling of the great Disney art director Paul Hartley. It resulted in a book that at once feels vintage and current.

Vanessa gave me a ton of reference—the WDI Collection houses scores of Hartley’s works for Disneyland, Walt Disney World, and the 1964–1965 New York World’s Fair. Posters, signage, tram cards and print collateral graphics were his forte. He was so prolific. His work in magazine and book design was the key resource for me. I looked through issues of “Mickey Mouse Club Magazine” and its successor, “Walt Disney’s Magazine,” published from 1955-1959, and the books Hartley art directed.

JUSTIN: Can you tell me something in the book that you’re particularly excited about?

PAUL: An idea that came about at the very last minute had to do with this really glorious huge  76″ x 32″ EPCOT concept rendering, created in 1975 by award- winning production designer John DeCuir, Sr. The dynamic width of the piece made it really hard to present without cropping it. It broke my heart to have to lose it. Then our editor suggested putting it at full-width on the inside of the dust jacket, as an “easter egg” for readers.

JUSTIN: That’s terrific. Thank you for sharing some insight on how these great Disney Editions books come about. I’m always fascinated to know how Disney projects are made—that “backstage” view is a big part of Disney culture!

“The Disney Monorail: Imagineering a Highway in the Sky” is on sale September 15.