We have some updated photos of the painting project being done to Cinderella Castle. They are almost done!

Aerial view of Cinderella Castle today. It's been trimmed in gold for the 50th anniversary. Roofs at the hub are being painted matching richer blue. pic.twitter.com/0GyCUG1FQI

As we previously reported, Cinderella Castle in the Magic Kingdom would receive a “golden makeover” to celebrate the 70th Anniversary of the iconic movie, “Cinderella.” No definite date was given when the painting would be complete but we were thinking it would take the entire Summer. 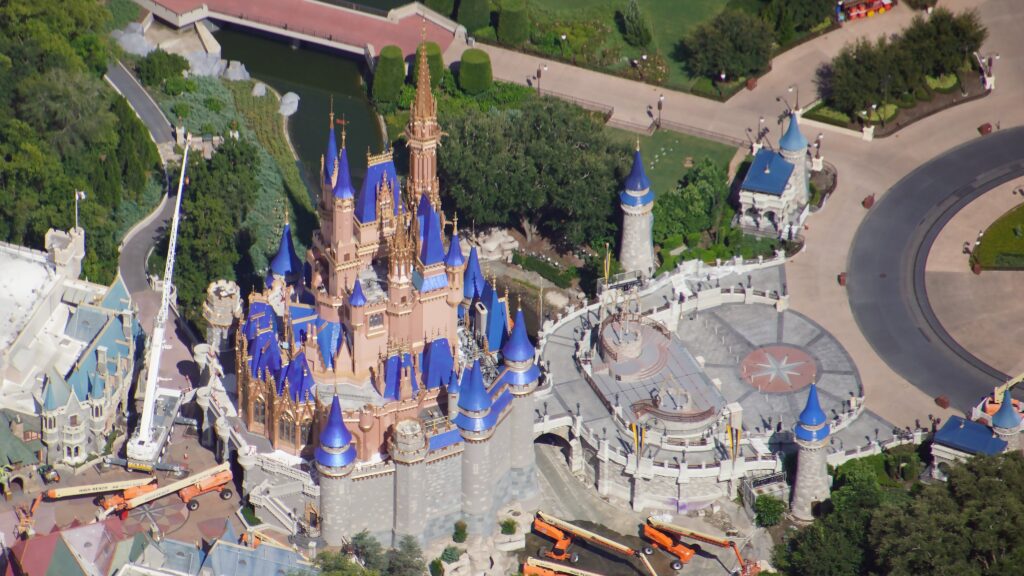 2020 marks the 70th anniversary of Disney’s iconic, animated classic, “Cinderella.” Several events have been created to celebrate along with several new “Cinderella”-themed treats. But, Disney is taking it to another level with this new announcement: Cinderella Castle in the Magic Kingdom at Walt Disney World  will become even more magical when it receives a makeover with a new color scheme and golden touches!

Just like how Cinderella herself transformed into a princess when the animated classic was released 70 years ago this week, her namesake castle at the heart of Walt Disney World Resort will soon be made over with bold, shimmering and regal enhancements befitting the park so many hold so near and dear to their hearts. We are so excited to also share this beautiful concept image with you which shows the castle featuring a brand-new color scheme created by Walt Disney Imagineering for Cinderella Castle.

Disney has stated this will be a permanent change. It will also be perfect when Walt Disney World celebrates its “golden” anniversary in 2021!