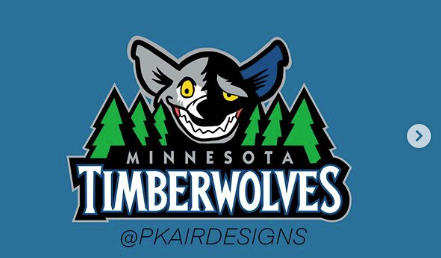 After a four-month suspension due to the coronavirus pandemic, the 2019/20 NBA season will resume on July 31. Recently, the league announced a revamped regular season format which would see the top 22 NBA teams with respect to win-loss record will head to Walt Disney World in Orlando, Florida to play the final part of the season. Amid the excitement for NBA teams heading to Disney World, an Australian artist re-designed the logos of NBA teams with inspiration from some of the popular Disney characters.

Phoebe Mae Williams from Melbourne, Australia uploaded Disney NBA logos of some of the franchises to her Instagram handle, PK Air Designs. On Sunday, Williams released her first Disney NBA logos of Eastern Conference sides Boston Celtics and Milwaukee Bucks. Celtics logo featured Mickey Mouse dressed as Lucky the Leprechaun while the Bucks logo had Bambi in the middle.

Disney x NBA mashup logos following the recent announcement!! Keen as to get some more done, let me know what teams you want to see next! 🔥🙌🏼🏀

Couple more Disney x NBA logos I did this afternoon! 🦖💜🏀

Disney NBA logos: Minnesota Timberwolves with the Hyena from The Lion King, Chicago Bulls with Pumba

Disney X NBA logo designs 🏀🔥 loved playing around with some lion king characters today, which one is your favourite? 🤔

Disney X NBA logo designs 🏀🔥 Both highly requested so couldn’t disappoint!! 🙌🏼 ———————————————— Also just wanted to thank you all for the support, having so much fun smashing these out for you guys, all 30 NBA teams are on there way so make sure to follow so you don’t miss your team! 🔥💓

Disney X NBA logos 🏀🔥 nice and simple with Fantasia for Magic and Pirates of the Caribbean for Clippers, as requested!! Was super hard coming up with ideas for clippers, thanks to everyone giving suggestions! ☠️💫

As mentioned above, the NBA Disney return is slated for July 31. According to the statement released by the NBA, “the 22 returning teams would be the 16 teams in current playoff positions and the six teams that are currently six games or fewer behind the eighth seed in their respective conferences.” 13 teams from the Western Conference and 9 teams from the Eastern Conference will form the 22 NBA teams going to Orlando.

Thinking about a visit to Disneyland? Getting started is easy! Simply reach out to MickeyTravels today to get your FREE, no-obligation quote.