Hollywood Reporter ran an article this morning about Disney’s vulnerabilities as the theme parks close, production halts on films and Disney stock takes a plunge. In the piece its suggested that speculation is starting to surface as to whether Apple may be setting its sights on the company.

“Mega-cap companies with large cash balances and whose equity outperformed Disney over the last three weeks, like Apple, could take advantage of the volatility” says Georg Szala in the Hollywood Reporter. 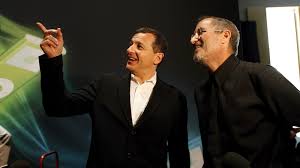 Anyone who is following the news will know that stock markets are taking a beating due to uncertainty around the spread of the COVID-19 virus.  This leaves those on Wall Street speculating as to whether “cash-rich technology powerhouses” may be looking to takeover Hollywood companies.

In a research report by Rosenblatt Securities that was released on Friday they suggested that Apple could consider acquiring the Walt Disney Company after its stock plummeted below the $100 million mark last week.

Analyst Bernie McTernan who wrote the report said,  “We believe those with long-time horizons, like mega-cap companies with large cash balances and whose equity outperformed Disney over the last three weeks, like Apple, could take advantage of the volatility,” he wrote, noting that Disney’s market capitalization was approximately $165 billion, while Apple has about $107 billion in cash and securities. “The upside from acquiring Disney would be securing their content/streaming strategy and potential synergies from adding the emerging Disney ecosystem to the iOS platform.”

McTernan added,  “Over the last three weeks Disney has lost about $85 billion or roughly one-third of its market cap.” Mc Ternan went on to explain that the Disney+ streaming service could help boost Apple’s own service helping the company solve content problems.  Comparatively, Disney+ has impressed straight out of the gate signing up over 28.6 million subscribers as of the beginning of February.

This is a story that we’ll continue to follow closely and we promise to let you know as soon as we’ve heard more! Readers are encouraged to keep following along with MickeyBlog for the latest Disney news and updates.

Disney Theme Parks May Currently Be Closed But Did You Know You Can Plan A Disney Getaway Through Until the End of 2020? Don’t let Coronavirus put a damper on your Disney plans. Reach out today to get your FREE, no-obligation quote from MickeyTravels.