When it comes to storytelling, the Disney Wish will have it all: enchanting fairytales, heroic challenges, thrilling adventures, galactic encounters, peaceful escapes and so much more.

Setting sail in summer 2022, the fleet’s fifth ship will feature new spaces and experiences infused with more Disney storytelling than ever, bringing to life the fantastical worlds and beloved characters at the heart of Disney, Pixar, Marvel and Star Wars adventures. 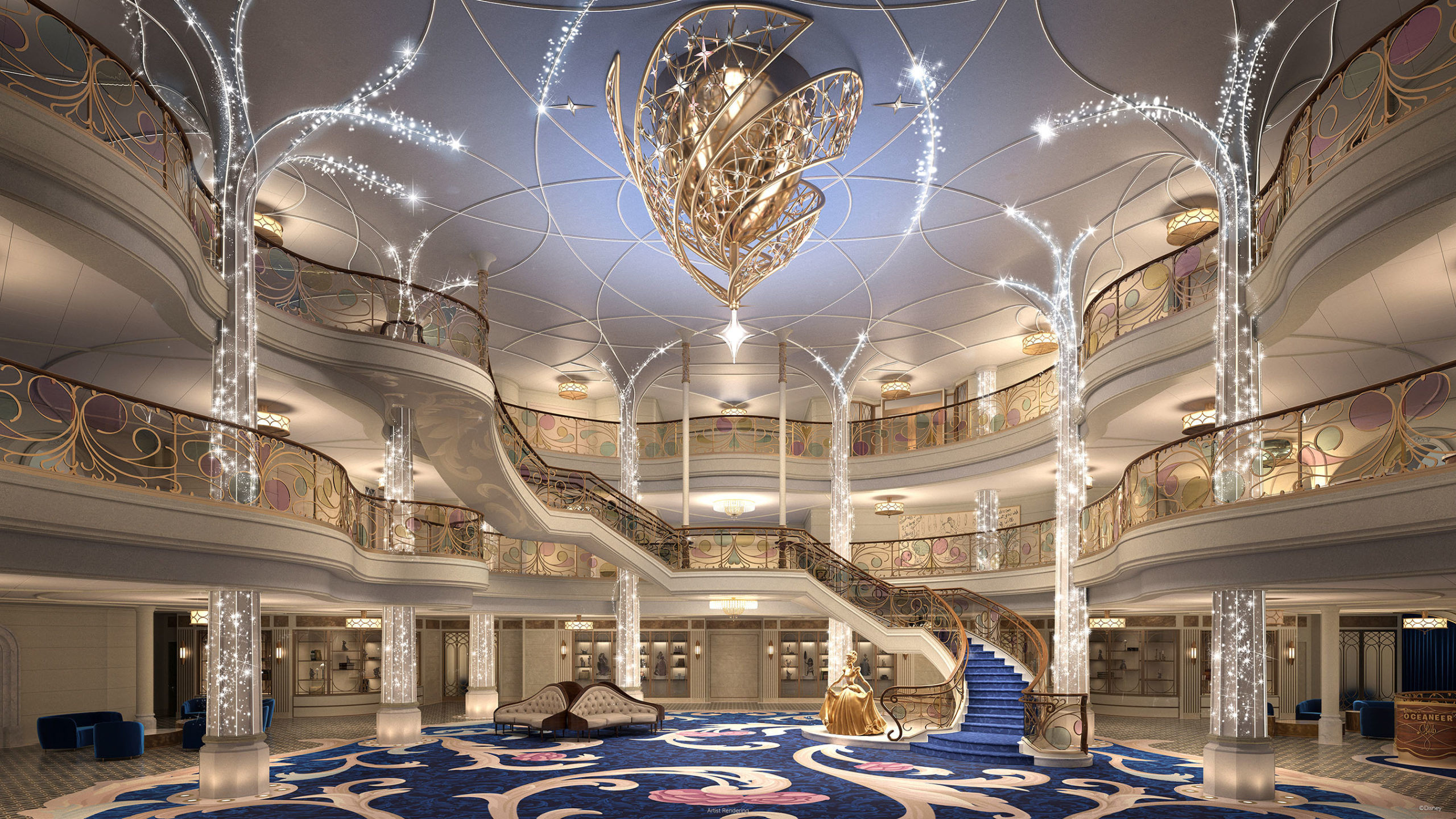 Let’s start with the Grand Hall, though this might seem like an unusual starting point for an article about entertainment, all we can say is – “Not anymore!”  The Cinderella-inspired Grand Hall will transform the main area of the ship into an “environmental theater” with special effects and an atrium stage.   Here guests will be able to enjoy dedicated shows and interactive entertainment!

Luna is what Disney Cruise Line is calling the “Town Square” of the Disney Wish.  This gathering place is meant to evoke the whimsy of Disney storytelling.  During the day, this will be your go-to spot for family fun and in the evening it will be transformed into a space offering adult-exclusive entertainment with live shows.

The space itself will feature a 2-story LED screen wall, stage and spacious seating. There will even be a balcony area that will provide semi-private booths for small groups. 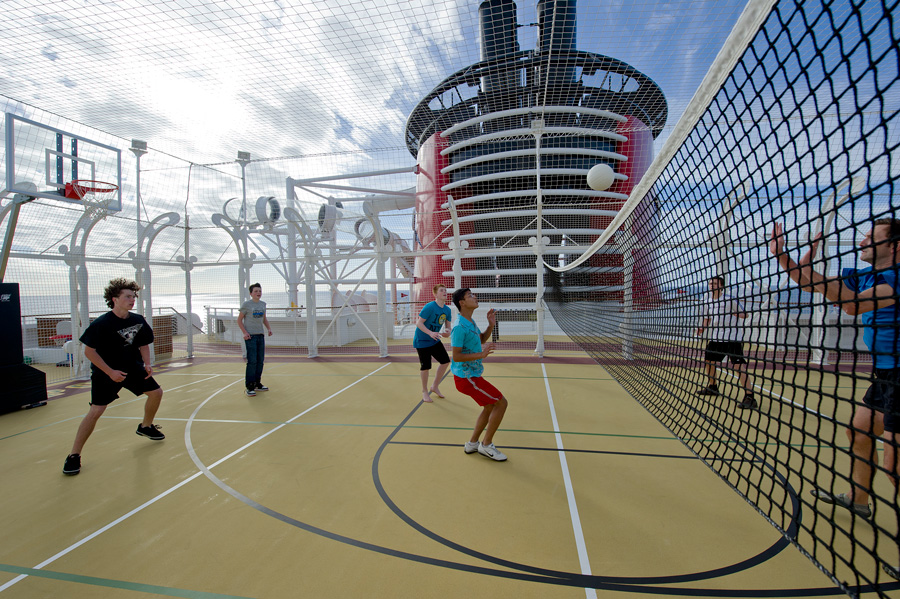 Move over miniature golf!  This futuristic sports arena will blend physical activity with imagination.  During your sailing it will alternate between a family obstacle course and “free-play sports hub.”

Families will be able to take part in physical challenges, participate in game-show style competitions and there will even be a balcony area for spectators! 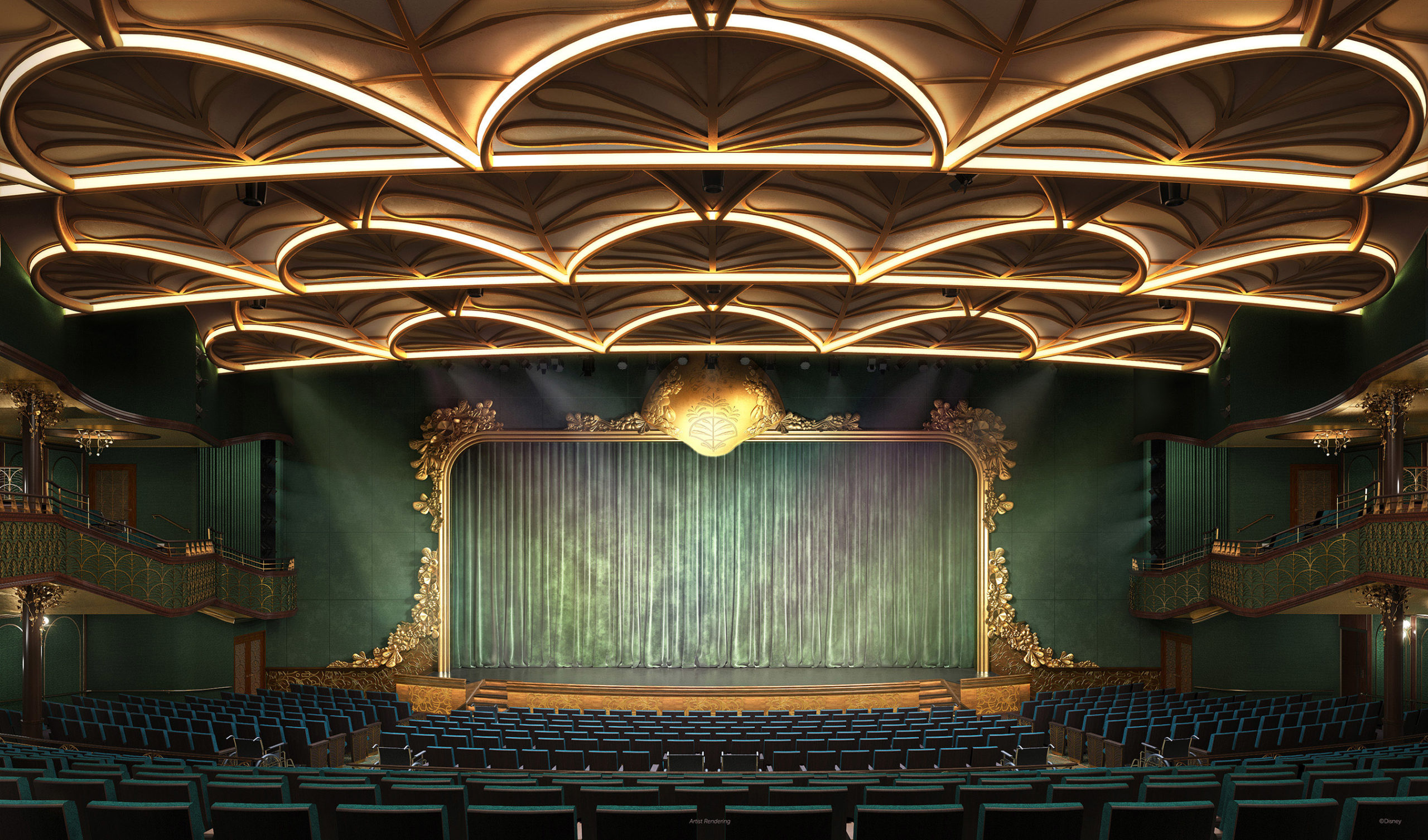 On board the Disney Wish, guests will find an impressive roster of Broadway-style shows which have been created especially for Disney Cruise Line.  They be presented in an 1,274 seat theater that spans three decks with both orchestra and balcony seating!

The décor of the theater was inspired by an enchanted forest like the one in Walt Disney Animation Studios’ Fantasia. The space will feature state-of-the-art technology, projection mapping capabilities and a Dolby Atmos 3D audio system to create immersive theatrical experiences.

Though Disney is remaining pretty tight-lipped about the shows that will appear on the Disney Wish they did reveal one! We here at MickeyBlog are pleased to announce that the Disney Wish will feature an adaptation of “Disney’s Aladdin- A Musical Spectacular.” This musical comedy is based on the beloved Disney Animation classic about a street rat Aladdin who meets a wise-cracking Genie, falls in love with Princess Jasmine and must square off against the evil Jafar.

The musical will feature iconic songs including “Friend Like Me” and “A Whole New World.” Alan Menken has also created an original song for the production called “To Be Free” which will be performed by Princess Jasmine.

The Disney Wish will feature not one but TWO cinemas that will be “steeped in Disney storytelling.” and will offer Dolby Atmos 3D audio technology to help bring your favorite films to life.

First up is the Wonderland Cinema which is inspired by “Alice in Wonderland” with decor done in a Tulgey wood motif.  The ceiling will even be decorated to give guests the feeling that you are peering through an enchanted tree canopy!

Then there’s the Neverland Cinema which as the name suggests, was inspired by Peter Pan.  The cinema will feature iconic scenes form Neverland including Skull Rock and Mermaid Lagoon.  The venue will also feature a night-sky color palette that can light up with a flutter of Tinker Bell’s wings!

Guests aboard the Disney Wish will want to head to the Upper Deck where the pool district also doubles as an entertainment venue.  The ship will feature a jumbo LED screen that will show entertainment throughout the day including movies, sporting events and more.  And of course, it wouldn’t be a Disney Cruise without the deck parties and fireworks at sea!

We hope you’ve enjoyed this wee taste of the awesome entertainment you’ll be able to enjoy aboard the Disney Wish.   The ships maiden voice will be a 5-night Bahamian sailing departing on June 9, 2022 and bookings open up on May 27, 2021 (May 17 for select Castaway Club, DVC and Adventures By Disney members.)

If you’d like to get a jumpstart on this exciting Disney adventure at sea, you can fill out my form below for your FREE no-obligation quote!

Have you heard the news!? Disney Wish sailings will be available to book on May 27, 2021 for sailings June through September of 2022!  Book your getaway with ME before the end of May of 2021 and I’ll throw in a Disney Gift Card!* Plus 1 lucky family will be picked each month to receive a special in-room delivery from Disney Floral & Gifts!  Simply fill out my form below to get your FREE, no obligation quote!

With new policies and procedures in place for next year, there’s never been a better time to work with an Authorized Disney Vacation Planner who can help you navigate through Disney Cruise Line’s new way of doing things! Just fill out my form HERE to get your FREE, no-obligation quote. Alternatively, feel free to reach out at mroden@mickeytravels.com or follow along on Facebook