Earlier today, MickeyBlog reported that fireworks and other events at Walt Disney World were cancelled due to high winds in the area. Since then, a tornado watch has been issued for all of Central Florida.

The National Weather Service has issued the Tornado Watch in effect until 3:00 AM EST. 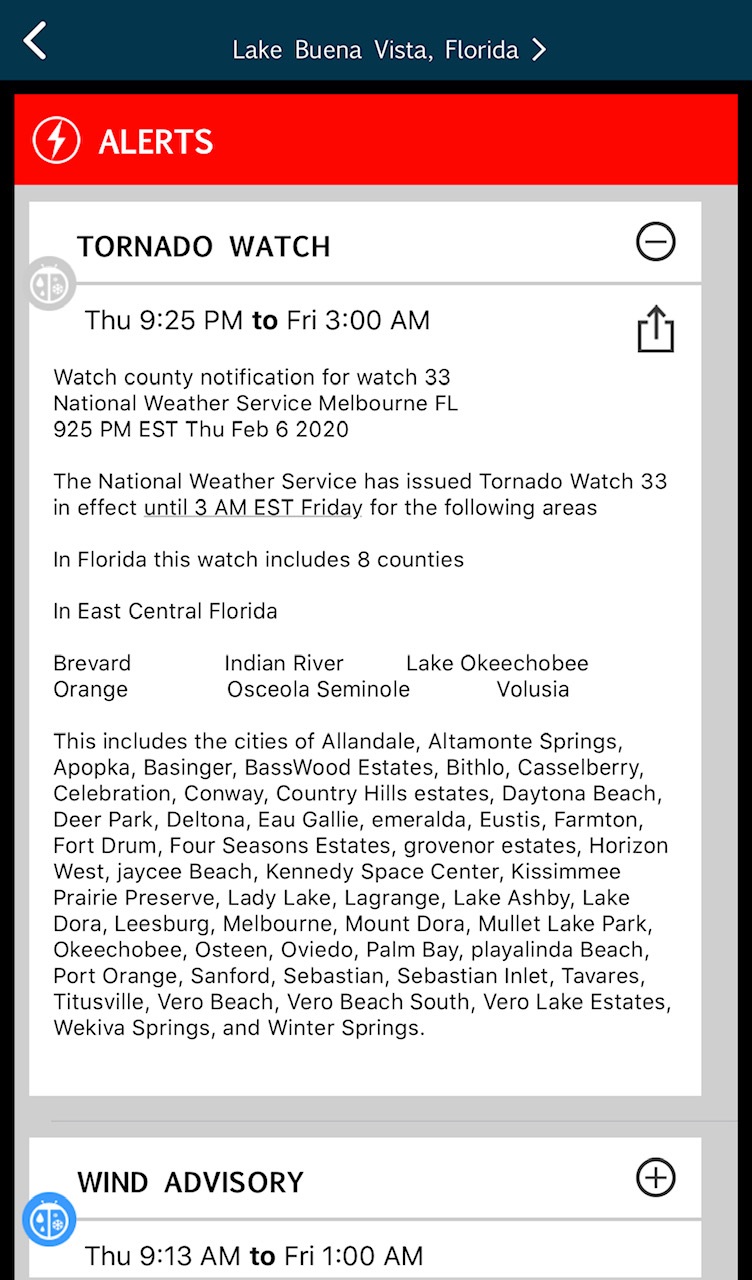 Local news outlets and the Orlando Police Department have taken to Twitter to alert everyone of the Tornado Watch.

Fox 35 Orlando alerted followers of the Tornado Watch.  Walt Disney World is located in Orange County, FL, one of the counties included in the watch.

Some roads and highways around Orlando were closed due to the high winds. Orlando Police warned people in the area to drive safely if they have to be out on the roads.

A Tornado Watch is in effect for much of Central Florida this evening. If you have to drive, do so safely. pic.twitter.com/VWFUapvlSB

Chief Meteorologist from WESH-TV2, Tony Mainolfi also alerted everyone to the Tornado Watch for Central Florida.

ALERT: A Tornado Watch has been issued for parts of Central Florida. Here's a look. Your First Alert Weather Team will be tracking things all day long… #WESHwx #FLwx pic.twitter.com/ZQuzBcLyYO

David Heckard, Certified Meteorologist on Spectrum News 13 in Orlando, provided his followers with a map and timeline of when the storms should hit.

No major changes to the timing of storms tonight:

Damaging winds and isolated tornadoes are the biggest concerns for Central Florida according to WFTV Weather.

Tornado Watch now issued for ALL of Central FL until 3am. Damaging winds and Isol'd tornadoes are our biggest concerns. Tune into @wftv tonight for the latest details. pic.twitter.com/09SNkqftID

WFTV is tracking the storm and will provide updates at 11:00 PM EST.

Storms are moving into Central Florida, and we could have potentially damaging winds and even an isolated tornado threat. .@TTerryWFTV is tracking these storms for you live, tonight at 11 on Channel 9 Eyewitness News. Download the Free #wftv Weather app: https://t.co/0E7IoVjhOQ pic.twitter.com/NP8sIMBOuc

Stay tuned to MickeyBlog for additional updates on the Tornado Watch. If Walt Disney World is further impacted on Friday due to the winds/potential tornadoes, MickeyBlog will bring that news to you first!