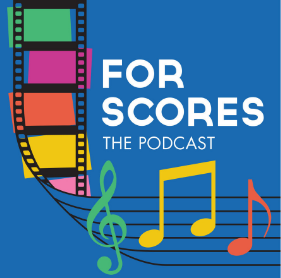 Disney Music Group in association with Treefort is set to debut For Scores, a new podcast series featuring interviews with film and television composers from Disney, Marvel Studios, Pixar and in the future, Lucasfilm, 20th Century Fox, and more.  The new podcast is hosted by Variety’s Jon Burlingame and will give voice to award-winning visionary composers, exploring the challenges and emotional journeys of these musical storytellers.

EPISODE 1: Alan Silvestri (Marvel Studios’ “Avengers: Endgame,” “Avengers: Infinity War,” “The Avengers,” “Captain America: The First Avenger”) – Composer Alan Silvestri talks with host Jon Burlingame about his work on four films from the Marvel Cinematic Universe, including “Avengers: Endgame.” Alan also reveals the emotional process he goes through, how it has shaped his work in the film industry over the decades and how despite the wide range of movies he’s worked on — that it’s all still a terrifying mystery to him.

EPISODE 2: Pinar Toprak (Marvel Studios’ “Captain Marvel,” Pixar’s SparkShort “Purl”) –Composer Pinar Toprak speaks with host Jon Burlingame about her amazing journey from studying violin at a conservatory in her homeland of Turkey, to becoming the first woman to score a film in the Marvel Cinematic Universe. She shares stories about the soundtrack that most influenced her career, her work scoring popular video games and the panic attack that helped her come up with the theme for “Captain Marvel.”

EPISODE 3:  Harry Gregson-Williams (“Penguins”) – Composer Harry Gregson-Williams tells host Jon Burlingame how he helped make penguins seem even more charming and funny in Disneynature’s “Penguins.” They go on to discuss why Harry actually enjoys the stress of conducting his own scores and how his own children are both his best audience and critics. Harry also gives a sneak peek into the music for the upcoming live-action “Mulan” film.

EPISODE 4: Henry Jackman (“Ralph Breaks the Internet,” “Wreck-It Ralph,” “Big Hero 6”) – In this first of two episodes with composer Henry Jackman, he tells host Jon Burlingame how he rebelled against the classical music and choir singing of his childhood in England with drums and pop music. He also reveals how a surprise call from the legendary Hans Zimmer led to his career in film scoring, as well as the secret homage he made to John Williams’ iconic music from “Star Wars” in “Ralph Breaks the Internet.”

Commenting on the podcast series, Disney Music Group President Ken Bunt stated, “Launching a podcast was a natural progression for us given our legacy and rich history with award-winning film and television soundtracks.  We look forward to including composers from our upcoming slate.”

Robbie Snow, Disney Music Group’s senior vice president of marketing added, “We’re incredibly fortunate to work with such a well-respected journalist and expert in music for films and television.  Jon’s rapport with these composers has evoked poignant and personal accounts of their scoring processes.”

The “For Scores” podcast series is produced by Maria Kleinman for Disney Music Group in association with Treefort Media, an LA-based podcast company with a mission to expand imagination through premium audio storytelling.  The episodes will be available to download everywhere podcasts are enjoyed on August 23rd.  Four more episodes are scheduled for the fall and into 2020.  Visit ForScores.com for more information.

About Jon Burlingame:Jon Burlingame is the nation’s leading writer on the subject of music for films and television. He writes regularly for Variety and, over the past 30 years, has also written on the topic for leading newspapers such as The New York Times, Los Angeles Times and the Washington Post. He is the author of four books including “The Music of James Bond” and “Sound and Vision: 60 Years of Motion Picture Soundtracks,” and he teaches film-music history at the University of Southern California.

About Treefort Media:Treefort Media works with top media companies and outstanding talent across news, sports, lifestyle, tech and culture to develop compelling stories and ongoing conversations for listeners around the globe.

About Disney Music Group:Disney Music Group is home to Hollywood Records, Walt Disney Records, Disney Music Publishing, Buena Vista Records, and Disney Concerts.  The labels’ genre-spanning rosters include Queen (in the U.S.), Sofia Carson, Bea Miller, Sabrina Carpenter, Joywave, morgxn, Tini Stoessel, Dreamers, JD McCrary, and more.  DMG also releases family music and film and television soundtracks such as the chart-topping “Guardians of the Galaxy” “Beauty and The Beast,” “Descendants,” Oscar-winning “Coco” and “Moana” soundtracks, and the Oscar and Grammy-winning “Frozen” soundtrack.  Recent releases include “Avengers: End Game,” “Aladdin,” “Toy Story 4,” and “The Lion King.”  Upcoming titles include the highly-anticipated “Frozen 2” and “Star Wars: The Rise of Skywalker.”  DMG has a rich catalog with a lasting legacy that has impacted pop culture globally, including music from films like “Snow White,” “Pinocchio” and “Star Wars,” artists like Annette Funicello, and beloved classics like “It’s A Small World.” Disney Concerts licenses and produces hundreds of shows around the world, including Star Wars in Concert, Disney On Classic, Beauty and the Beast, Soy Luna and many more.