Back in June, it was announced that Disney Junior – Live on Stage! would be taking it’s final bow on September 1st, 2018. This incredibly popular show featured favorite characters such as Jake and the Neverland Pirates and Mickey Mouse Clubhouse. It was also announced that the show would be getting an upgrade. Disney has just announced the debut date of Disney Junior Dance Party! at Disney’s Hollywood Studios!

Guests will be able to party down with Disney Junior characters Doc McStuffins, Timon (from Disney Junior’s The Lion Guard) and Vampirina beginning December 22nd. The one and only Mickey Mouse will also attend the party in his Mickey and the Roadster Racers gear! 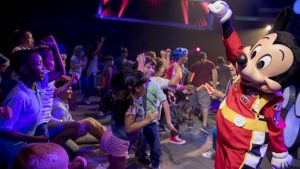 Disney invites guests to sing, dance and play along with their favorite Disney Junior stars during this new incredible show. Disney Junior Dance Party! will feature high-energy songs, dazzling special effects, new friends and beloved characters.  Hosted by Finn Fiesta and DJ’d by the ever talented Deejay, this party is sure to be a hit!

There is also great news for Disneyland Resort lovers of Disney Junior Dance Party! The one and only Vampirina will be joining in on the incredible dance fun at Disney California Adventure Park beginning February 1st, 2019. Guests can party with all of these amazingly lovable Disney Junior characters from coast to coast!

Interested in a Disney destination vacation? I can book and plan your entire trip for FREE! Contact me today at MickeyTravels for your FREE, no obligation quote. Whether it’s for Walt Disney World, Disneyland, Disney Cruise Line or Adventures By Disney vacation, the possibilities are endless. My magical planning services are also included at no extra cost. You can find me on Facebook or via email at brooke@mickeytravels.com.