Have you ever heard a frequent Disney guest use the term, “Rope Drop?” Well, you have if you’ve read any of my articles, as I abide by this strategy religiously while visiting Walt Disney World. Someone pointed out to me the other day that I’m asking you to run before you can walk through Disney theme parks. So, I’d like to take this opportunity to explain one of the most important concepts of a park visit. Here’s everything you need to know about the Disney Rope Drop.

What Is a Rope Drop?

Rope Drop is an antiquated term that hearkens back to the earliest days of Disneyland. When the park prepared to open, Disney signaled the start of the morning in an unusual way. Cast members carried ropes to the front entrance. When they lowered these ropes, guests could freely enter the park and head directly to their favorite attractions.

When Walt Disney World opened, Disney carried the strategy across the country to its newest park. Since this park is so much larger than Disneyland (107 acres vs. 85 acres), guests had more room to fan out in different directions. Disney updated the Rope Drop to address this changing circumstance.

Cast members would carry the ropes down Main Street U.S.A. to the hubs for the other themed lands. Then, they would pull the ropes apart (there was no actual dropping) and allow guests to head to appropriate attractions. It was an early way of improving traffic flow at Magic Kingdom.

Over time, Disney developed better means of park access. Technological advances eliminated the need for the proverbial ropes, but the term remained. Today, you tap your Magic Band at the park entrance and walk into the park whenever cast members first allow people to do so. Everyone still calls it Rope Drop, though. 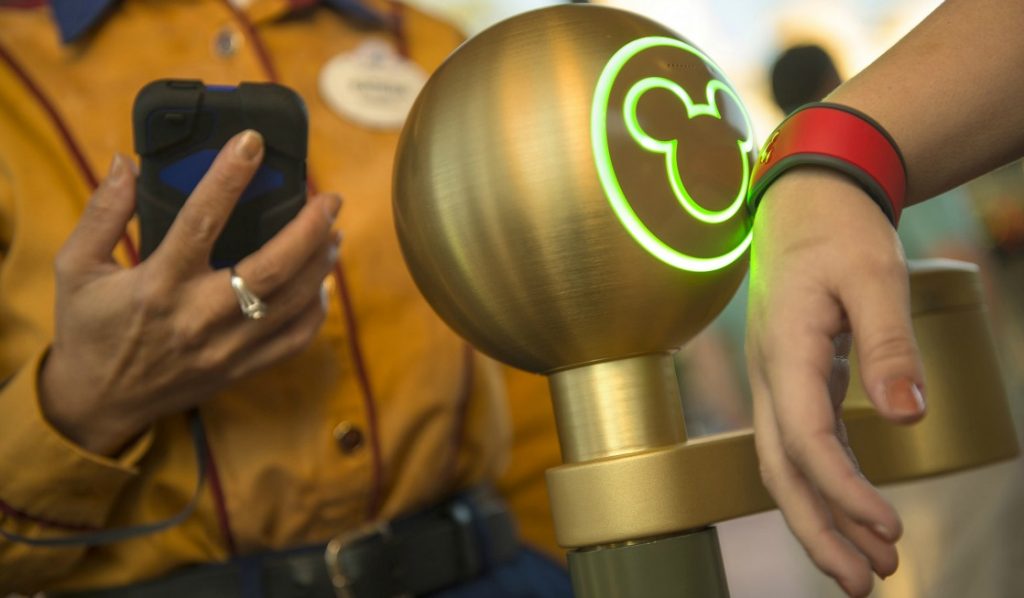 How Does Rope Drop Work?

The intricacies of Rope Drop vary slightly by park, but the underlying concept is the same. A person arrives at one of the Walt Disney World gates several minutes before it opens. Then, said person waits until Disney allows guests to walk inside the park.

At this point, the herd begins to thunder. Everyone has a specific attraction in mind, generally one with a long wait most of the day. The idea is to beat the crowd to said attraction, thereby riding it within the first few minutes of the park’s opening.

This tactic may not sound like a huge deal, but a properly implemented Rope Drop strategy does two things. First, it frees you to spend the time you saved waiting in line on that Rope Drop ride to do something else…or multiple things. Some attractions like Frozen Ever After and Seven Dwarfs Mine Train have had 60+ minute waits since their inception. When a park opens at 9 and you exit one of these rides at 9:20, you feel pretty good about life.

That’s the second thing that Rope Drop does. It sets a tone for your day. You’ll feel like you’re capable of more when you ride something with a notoriously long line within moments of Rope Drop. You’ll ever remember particularly successful runs long after you’re home from Disney. I still smile wistfully when I think of that time we rode Expedition: Everest three times by 9:30. We needed Rope Drop, a FastPass, and Single Rider line to do it, but we ruled over the Yeti that morning.

Which Rides Are Best for Rope Drop?

Here’s the wonderful thing about Disney. My answer isn’t the same as yours. A lot depends on what you love to do best at the various theme parks. Is Pirates of the Caribbean your favorite ride? You can rush over there at Rope Drop and ride it multiple times within the first hour. Do you love Kilimanjaro Safaris? Well, I have a tip for that in just a moment, but I can say with confidence that you’ll be on one of the Safari Jeeps by 9:30 thanks to Rope Drop.

The obvious choices are the most crowded rides, of course. Rope Drop isn’t ideal for something like It’s a Small World or The Seas with Nemo & Friends, both of which have short lines at several points throughout the day. If you love those attractions, however, you’ll face little competition first thing in the morning and can ride theme at least twice during the first hour. Well, that’s true of The Seas with Nemo & Friends. The sheer length of It’s a Small World combined with its central park location muddy the picture there a bit.

The point is that a few rides are smart choices for Rope Drop. Soarin’ Around the World, Test Track, Seven Dwarfs Mine Train, Expedition: Everest, Toy Story: Midway Mania!, Peter Pan’s Flight, and Frozen Ever After all qualify. I’d also recommend both Avatar attractions, at least in theory, but Disney has largely negated the benefits of Rope Drop at Pandora – The World of Avatar. A year from now, the situation will be better when Star Wars Land debuts.

Similarly, I wouldn’t expect Rope Drop to work well with Toy Story Land, at least not in 2018. What you should do instead is go the other way. Pick a different attraction at the same park that’s slid under the radar due to the new hotness. I’ve had fantastic luck with Test Track since Frozen Ever After opened and Soarin’ changed to the new version. Test Track is now a distant third out of the three choices, making it an ideal Rope Drop candidate. By using Single Rider line, you may get to build your vehicle once and do the ride twice.

What Are the Best Rope Drop Tips?

I’m a fan of doubling up or cleaning out an area. I’ll explain what I mean about each one. I previously mentioned Kilimanjaro Safaris, one of the quirkiest attractions at Walt Disney World. Guests have noticed that the regular line for the safari is often shorter than the FastPass line. It’s not an optical illusion, but it is a bit misleading. Cast members running the line defer to FastPass holders, and so that side of the line moves exponentially faster, as it should.

A Rope Drop strategy you can employ here is to set up a FastPass for the first hour of Kilimanjaro Safaris. Don’t use it the instant you reach the line queue, though! Instead, you should get in the regular line, which should have a short wait. You’ll experience the safari once that way. Then, you can turn around and get in the FastPass queue to ride it again. The ONLY potential downside to this strategy is that you’re likely to see the same animals both times since they’re the only ones who have reached that part of their morning routine. They’re kind of on a Rope Drop of their own.

This concept applies to even the most popular attractions. I’ve successfully doubled up at Seven Dwarfs Mine Train, which conveniently has one of the shortest FastPass line queues at Magic Kingdom. Let me tell you that there is no greater joy than riding Seven Dwarfs Mine Train twice by 9:30 a.m. It’s among my proudest Disney moments. I felt like I had hacked the park that morning.

Cleaning out an area works better for people who don’t want to ride something twice in a short period. For example, I learned the hard way that my body isn’t up to the stress of riding Expedition Everest three times in half an hour at 9 in the morning. It sounds great in theory, and I wouldn’t change a thing about the day. I sorely needed a nap that day, though.

To clean out an area, set your FastPass for an attraction in a certain part of the park. Then, use Rope Drop to ride something else in the same general vicinity. For example, Peter Pan’s Flight and Seven Dwarfs Mine Train work well together. The line for Peter Pan’s Flight is insane relative to the two-minute length of the ride. You won’t mind it if you beat the crowd to the line, though.

Since Seven Dwarfs Mine Train also has a massive line, grabbing a FastPass for it means that you can be in and out in 15 minutes or less at Rope Drop. So, you’d head straight to Fantasyland at Rope Drop and ride Peter Pan’s Flight. Afterward, employ your FastPass at Seven Dwarfs Mine Train. You can ride both of them by 9:30, 9:45 at the latest. The shortness of Peter Pan’s Flight works in your favor in this regard.

These ideas are applicable to a lot of different attractions. I don’t claim to have all the best Rope Drop strategies, either. My hope is that I’ve got your thinking about how you can use the park opening to your fullest advantage.

Everything about Rope Drop is wonderful save for the fact that if you’re like me (i.e. NOT a morning person), those few minutes of getting to the park are a grumpy time. Once you’ve ridden one or two of your favorite attractions, however, you’ll change from Grumpy to Happy…and maybe also Sleepy. Good luck!