MickeyBlog News welcomes you to March! Yes, the weather is ready to get warm, which means Spring Break is right around the corner. You need your Disney fix, right? Well, that’s what we’re here for! Let’s get started.

Over the past few days, Disney’s revealed upcoming projects as well as changes to existing ones. Fans of the Disney Channel learned that they’re in for a treat over the next couple of years. First of all, Descendants 3 is confirmed. The third film in the television franchise will debut during the summer of 2019. While the film will feature some new cast members, the great news for fans is that Mal, Evie, Uma, Carlos, Ben, and Jay are all scheduled to return. The current plan is for the film to air on the Disney Channel, but it’s probably safe to presume that it’ll appear on Disney’s upcoming streaming service, too. 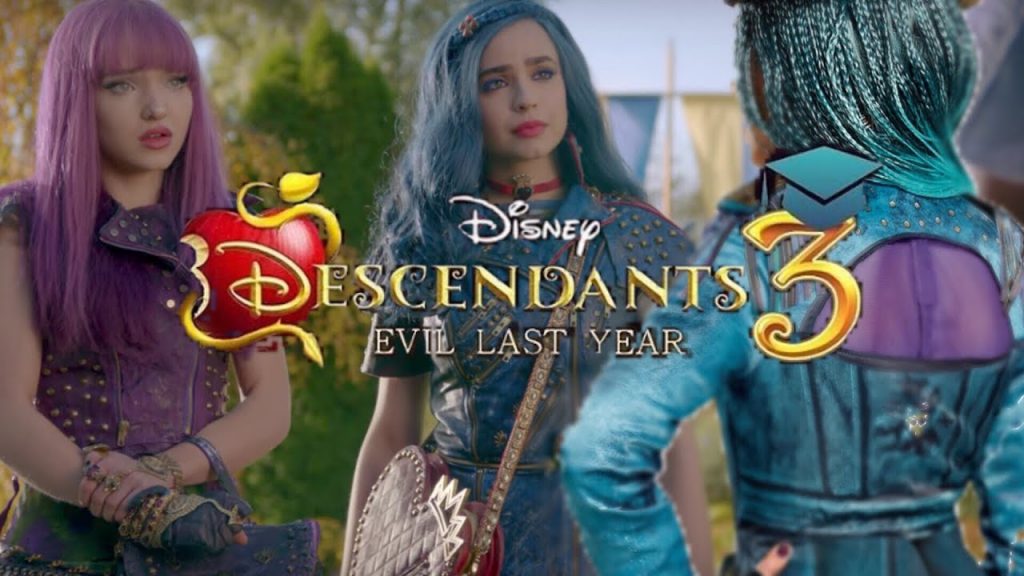 While a Descendants sequel isn’t a shocking reveal, a Kim Possible live action movie definitely qualifies. At the turn of the century, Kim Possible was the biggest franchise on the Disney Channel. The cable channel aired 87 episodes plus a pair of animated movies. It was a huge deal for the time, as Kim Possible: A Stitch in Time was the first made-for-Disney Channel animated movie ever.

The series also featured one of the greatest theme songs in television history, and its lead character was a wonderful role model for children. Disney’s right to resurrect the premise so that a new generation of kids can watch Team Possible in action. According to Variety, the movie is a Disney Channel project, but don’t feel surprised if it winds up as a theatrical release. Alternately, it’s a terrific anchor program for the new streaming service since it too should arrive in 2019.

Speaking of the streaming service, Disney’s not just announcing new projects with an eye toward the end of 2019. They’re also shifting scheduling strategies for existing films. The company’s film division had scheduled an Anna Kendrick release, Noelle, for theatrical release in November of 2019. Now, the yuletide project will take a different approach. It will debut on the streaming service, giving Disney an A-list holiday title. It’s a marketing strategy wherein Noelle will function as a loss leader. They’re going to cede what was likely $100+ million in box office (and possibly much more), all to hype their new app. It’s a bold strategy. 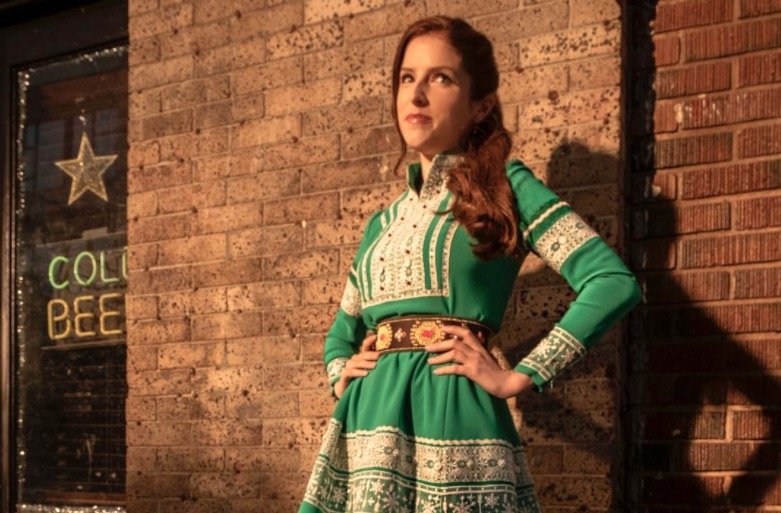 Black Panther is also the third biggest comic book movie ever, and it will surpass The Dark Knight for second place by this time next week. At that point, Disney will claim the top two spots, as Black Panther joins The Avengers. In terms of worldwide box office, the film will reach $900 million by the time you read this on its way to $1 billion by next Sunday. It will become only the 33rd film ever to reach $1 billion in box office. Suffice to say that it’s a massive blockbuster in every sense of the word.

Speaking of massive blockbusters, the number one movie of 2017 is about to arrive on the home video market. Star Wars: The Last Jedi will debut on digital streaming services like Vudu and iTunes on March 13th. Two weeks later, the 4K Ultra HD Blu-Ray package will become available in stores. Disney’s bragged that The Last Jedi is their first home video release capable of both Dolby Vision HDR and Dolby Atmos immersive audio. That’s a fancy way of saying that it’s the most technically advanced title in the Disney library right now. These features are currently available on most high-end televisions, but the growing popularity of 4k makes them readily available on a lot of mid-market TVs, too. 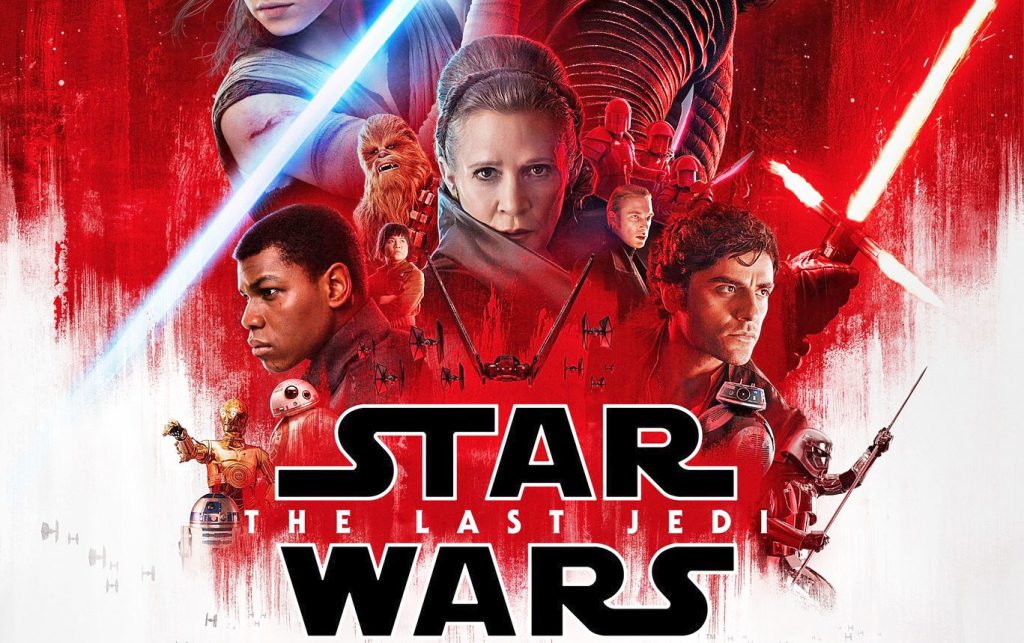 Are you debating whether to buy the physical edition? Well, the Multiscreen Edition satisfies the needs of most consumers right now. It includes a Blu-Ray copy and a digital license to watch the film on Movies Anywhere or other accompanying services. The 4k Ultra package costs more, but you also receive the features mentioned above. You can watch (or download) the digital version two weeks earlier, and it will have 4K/HDR functionality. You’ll possibly cede the Dolby Atmos. Vudu has this functionality, but the pre-release documentation is vague on whether it’s enabled.

Personally, I’m all about digital. I’ll buy the 4K version on Vudu (which propagates to Movies Anywhere) two weeks ahead of the physical copy. Disney collectors will feel differently, as a digital locker file won’t go on the shelf. You can proudly display your 4K artwork. Either way, any self-respecting Disney fan will buy a copy of The Last Jedi.

And the Oscar Goes to…

As mentioned in a previous edition of MickeyBlog News, Disney earned 10 Academy Awards nominations across nine categories. On Sunday evening, the awards were announced. As expected, Disney won some but lost most. They were only favored to win two categories, both of which were for Coco. Oddsmakers placed Star Wars: The Last Jedi as least likely winner in all of its categories, and Guardians of the Galaxy Vol. 2 was more of a courtesy nomination than a real contender. Realistically, Best Animated Short was their only real chance for a third Oscar. Here are the results of the nine categories where Disney had a chance to take home an Oscar:

Best Animated Feature Film: One betting site listed Coco as 1 to 49 to win. In other words, to win a dollar, you’d have to bet 49 dollars. Oddly, this was a smart bet, as Coco’s been a foregone conclusion in the category since its November release. 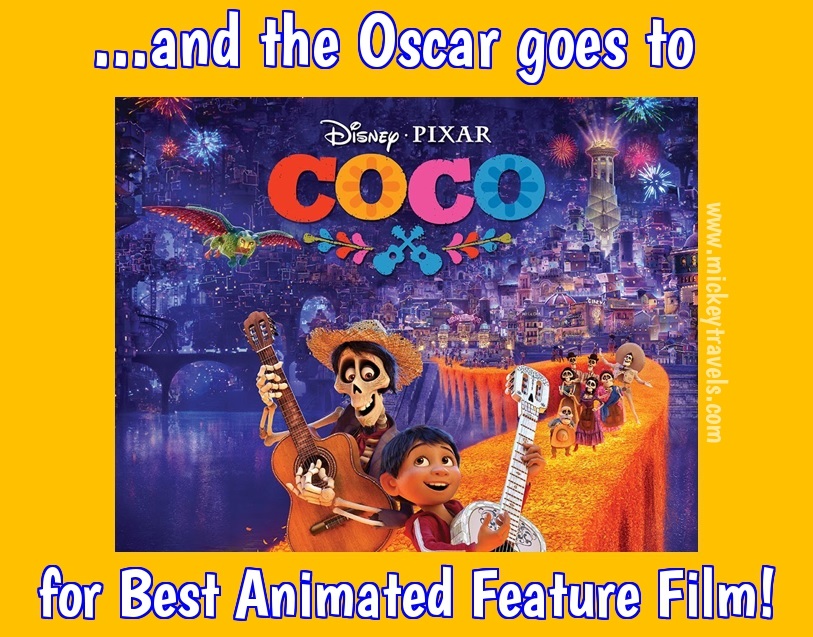 Best Animated Short Film: Besides Coco, Lou was Disney’s most realistic hope for an Oscar. Alas, it squared off against Kobe Bryant’s Dear Basketball, and the overwhelming majority of the voting academy loves the Los Angeles Lakers. Odds are good that Lou finished second, but they don’t give out Silver Oscars, only the Gold ones.

Best Original Song: A cynic would argue that “Remember Me” from Coco was all but written with an eye on this award. Understandably, odds makers viewed it as the likely winner, although “This Is Me” from The Greatest Showman was a close second. Disney won the award, making Coco one of the few multi-award winners on the evening. It was also the second victory for the collaborative couple of Kristen Anderson-Lopez and Robert Lopez. You know their other song better. It’s a little ditty called “Let It Go”.

Best Costume Design: Betting sites politely listed Beauty and the Beast as the second most likely option, but let’s be honest here. Phantom Thread is a film ABOUT Costume Design. It was always winning this category.

Best Production Design: Beauty and the Beast was a longshot against The Shape of Water and lost to it as expected. From an awards perspective, the remake came out in the wrong year. It could have won both of these categories in several recent years but didn’t have enough support against Phantom Thread and The Shape of Water.

Best Original Score: Well, what does John Williams know about scoring films anyway? Yes, that’s sarcasm. Williams has 51 Academy Awards nominations, putting him in rare air. The only person with more is some guy named Walt Disney. Star Wars: The Last Jedi wasn’t a legitimate contender, and the win for The Shape of Water was a foregone conclusion to most.

Best Sound Editing: This was another token nomination for Star Wars: The Last Jedi, with Dunkirk winning the category.

Best Sound Mixing: Star Wars: The Last Jedi had no chance in this category. One oddsmaker had it at 100 to 1, and that…wasn’t a smart bet. Dunkirk again won this award.

Best Visual Effects: Star Wars: The Last Jedi and Guardians of the Galaxy Vol. 2 both earned nods for Disney, and each one had an argument for the honor. Alas, Blade Runner 2049 is unmistakably gorgeous and a deserving winner in the category.

Overall, that’s two Academy Awards for Disney this year, both of which went to Coco. Beauty and the Beast and Star Wars: The Last Jedi each got shut out, leaving Coco as the only Academy Award winner. Disney will have to settle for that and the most dominant box office performance ever.

Thanks for visiting MickeyBlog.com! For a free quote on your next Disney vacation, please fill out the form below!