Have you heard about the stunning new Star Wars attraction at Disneyland Resort? No, not that one. Or that one. The one I’m talking about is at Disney Springs and Downtown Disney. Star Wars: Secrets of the Empire is the brand new augmented reality experience from The Void. If you don’t understand what any of that means, don’t worry! MickeyBlog’s about to tell you. Here’s everything you need to know about the spectacular interactive Star Wars experience that’s available today, which sure beats 2019!

The foremost experts on augmented reality interactive gaming experiences don’t reside in Silicon Valley. Instead, a humble building outside of Salt Lake City, Utah, harbors one of the most forward-thinking tech companies in the world. Its name is The Void, and you may have heard about it if you follow theme park trends. This corporation has plotted the future of the industry, one that they believe will have a basis in virtual reality.

Their original plan was to build a virtual reality theme park in Utah. They’ve since pivoted to a broader idea. The Void aspires to have a series of augmented reality entertainment centers across the world. They’ve already built one to trumpet the debut of the Ghostbusters movie reboot in 2016.

After extended negotiations, The Void persuaded Disney to build several facilities for a Star Wars interactive simulation. Two of them are at Downtown Disney and Disney Springs while the third is in London, England, although it’s a limited 12-week run. The Disney versions are permanent.

All three attractions have the same underlying structure. How would I describe it? Imagine a combination of Star Wars, an escape room, laser tag, and a videogame. When you enter the Star Wars: Secrets of the Empire gaming world, you’ll look, feel, and believe that you’re living your dream. You are a Rebel trying to use the Force and some combat savvy to overthrow a Stormtrooper base.

Along the way, you will look, hear, touch, and feel all the beloved elements of a Star Wars movie, only you’re the Jedi in charge! Your actions combined with others in your group will decide the ultimate outcome of the insurrection. Yes, you’ll work with strangers in the same way that Star Wars characters do…and the same way that laser tag players do. It’s a completely interactive simulation that costs only $29.99 to play. What’s involved? Well… 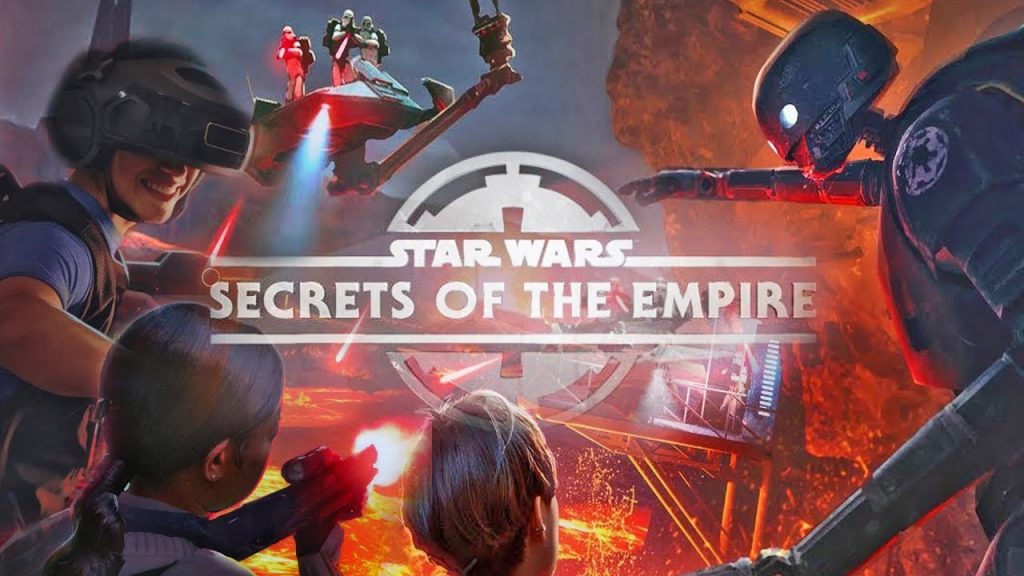 Describing a virtual reality experience isn’t easy. When I say what you wear and do, you may not understand whether I mean inside the game or in real life. Let me be clear. You will put on body armor and a helmet to play this game. You do this for important reasons.

The body armor contains haptic sensors akin to the ones in videogame controllers. You’ve used these for many years now, even if you didn’t understand their purpose. They provide a physical vibration that mirrors the action onscreen. Let’s say that you get shot playing Call of Duty. Your controller vibrates to demonstrate that your character is taking damage.

A more extreme version is the Nintendo Wii, which tracks your body language and displays it inside the videogame. The Xbox Kinect works in the same manner. Haptic sensors signal your body via vibrations that something important is happening onscreen. Your Star Wars body armor does the same thing. It contains sensors that will buzz when you take damage or interact with your environment. They’re the extra level of augmented reality that provides the escapism. The body armor mimics actual physical interaction.

The helmet has a more direct purpose. It’s the actual augmented reality display. The technology includes an Oculus Rift built into the helmet. You’ll see out of these goggles, immersing you in the fictional realm of Star Wars.

When you look at your hands while waiting in line, you’ll see everything as expected. When you enter the game world and look at your hands through the headset, you’ll see Stormtrooper hands as you attempt to infiltrate an enemy base. And the helmet also includes speakers that drown out noise from the real world while providing audio matching the onscreen action in Star Wars.

Finally, this simulation has a laser tag aspect, too. You’ll carry a “real” gun into battle. You’ll pick it up after you’ve strapped on your helmet and body armor. This weapon is obviously not real, but it’ll act just like any another videogame game once the augmented reality sequence begins. If you can’t shoot straight with your fake gun, you’re going to have problems. Stormtroopers are bad shots…but not THAT bad.

How the Game Works

When you play videogames in your home, you run into obstacles. Augmented reality systems like HTC Vive and Oculus Rift are especially problematic since they require full body movement. When you play games that require running or waving of hands, you might bump into very real walls in your fake environment. You might even dislodge a monitor or knock over a television. It happens. Honestly, my biggest fear about the coming wave of augmented reality is the safety of pets since you can’t see them under your feet while wearing VR goggles.

The genius of Star Wars: Secrets of the Empire is that you walk into an open space. That’s why it has an escape room feel. You’re in a giant area which your helmet displays as a Star Wars world. Mustafar is a lava world that’s home to an Imperial base. Your group’s mission is to hack some data about dangerous cargo. You’ll believe that you’re there, too.

The Void has worked in conjunction with ILMxLAB, a division of Industrial Light & Magic, the group that has crafted movie special effects for decades now. The photorealism of the playing environment will blow you away. The flowing lava seems like it’s hungry to swallow you whole. The bridges that support you are dangerously creaky, making you wonder if you’re headed toward a fiery grave.

When you look at your team, you’ll admire the brightness of the sharp white Stormtrooper armor. You’ll also marvel at the detail of the semi-helpful droid tasked with joining you on the project. It’s the K-2SO model from Star Wars: Rogue One, and it’s kind of a jerk at times. The simulation uses the droid to add a dose of humor to an otherwise intense experience.

Star Wars: Secrets of the Empire is so realistic that at a designated moment, someone will ask you to sit down. A corresponding bench will suddenly appear beneath you. When you sit down within the framework of the game, you’ll have the epiphany that you’re now seated in the real world! The design of the game rooms ably matches the virtual reality setting.

The important part of this experience is that you genuinely believe that you’re in the Star Wars universe. While early reviews indicate that it’s not perfect due to some flaws with the shooting aspects, you’ll still love to play it. After all, you’ve dreamt since you were a kid that you could one day inhabit the Star Wars universe for a time. During this 30-minute adventure, you can live out that fantasy in the most realistic way possible. It’s a once-in-a-lifetime experience for less than $30!

Do you want to know more about the Star Wars VR experience? Watch this video.